Kim Richards, 54, is seen for the first time since ‘sister Kyle urged her to seek treatment… before leaving UCLA hospital AGAINST doctor’s advice’

Kim Richards has been seen for the first time since reportedly checking out of the hospital against her doctor’s wishes.

The Real Housewives of Beverly Hills star, 54, cut a casual figure in white flared jeans and a leopard print blouse as she arrived at the Beverly Glen Center in Bel-Air with her business manager Michael London.

It comes just five days after reports surfaced stating that Kim’s family were growing increasingly concerned for her after weeks on a ‘downward spiral’, including her beloved sister Kyle, who urged her to return to treatment. 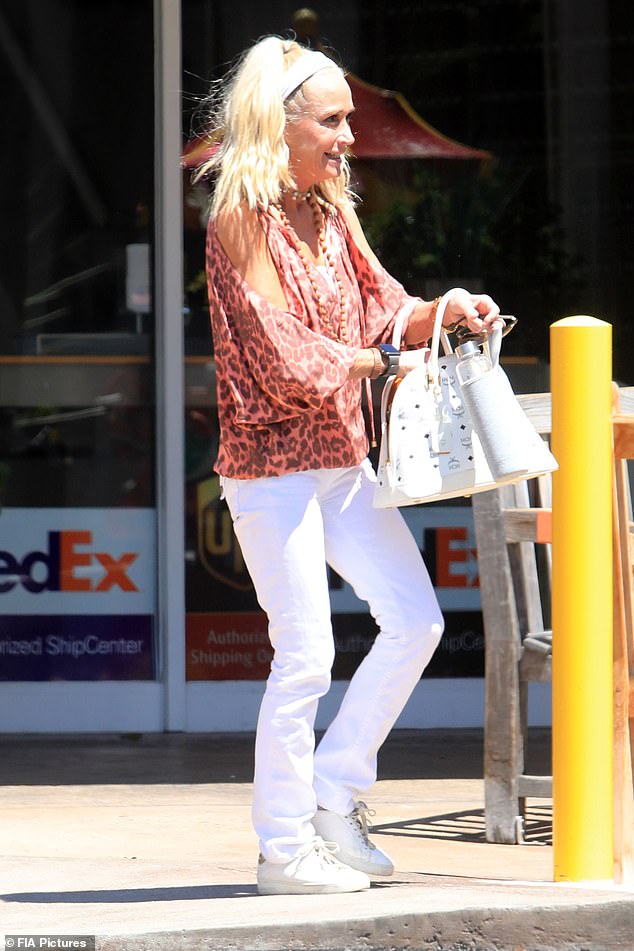 Out and about: Kim Richards has been seen for the first time since reportedly checking out of the hospital against her doctor’s wishes

Kim opted for a simple but chic look as she headed to the Los Angeles eatery, teaming the loose-fitting leopard print shirt with skinny white jeans.

The American reality TV star finished her summer ensemble with matching white trainers and a classic handbag, with her blonde tresses pulled back with a simple hairband.

Despite her recent personal woes, Kim appeared to be in high spirits as she headed out for the day with her manager, amid claims by loved ones that she has been on a ‘downward spiral.’ 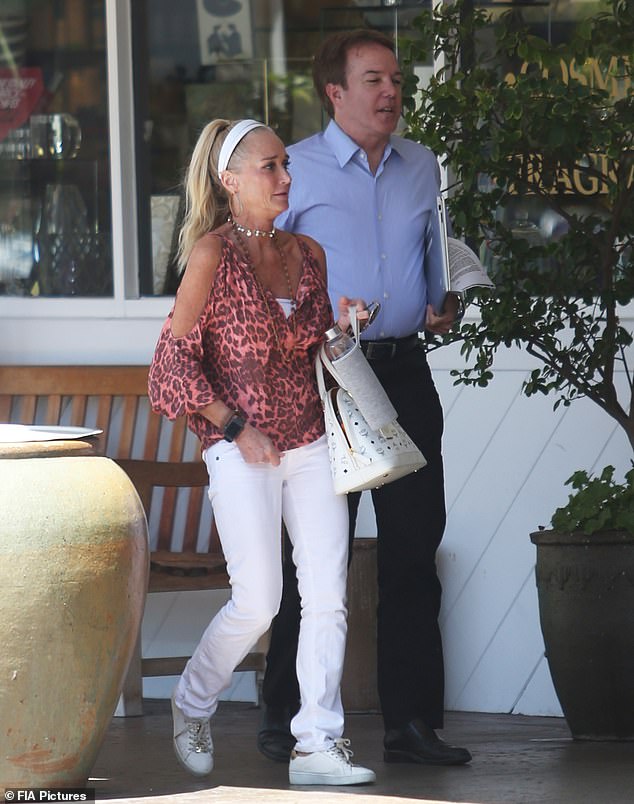 Embattled: The Real Housewives of Beverly Hills star cut a casual figure as she stepped out for lunch at the Beverly Glen Center in Bel-Air with her business manager Michael London 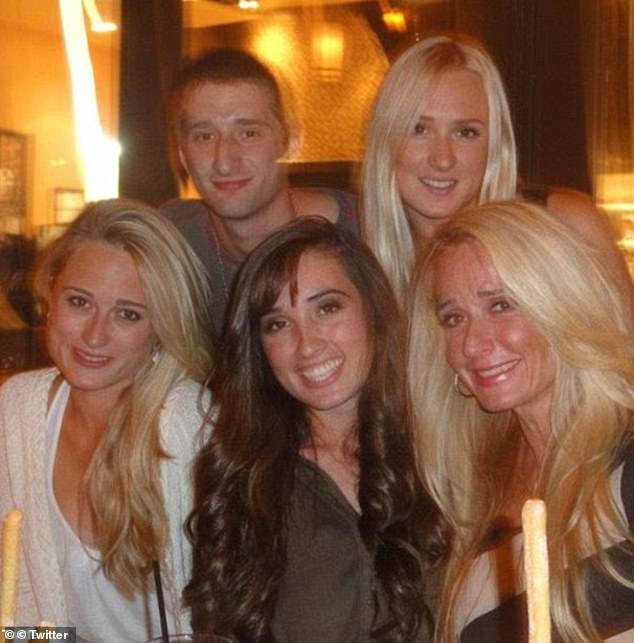 Struggling: It comes following reports on Thursday that Kim’s four children were concerned for her, with sources claiming her recent ‘downward spiral’ led her to visit the emergency room

On Thursday it was reported that Kim’s recent behaviour has sparked concern among her four children, Brooke, 33, Whitney, 29, Kimberly, 24 and son Chad, 28.

A source told US Weekly that these recent woes also led Kim to briefly visit the emergency room at UCLA hospital.

They said: ‘Kim abruptly left against medical advice. No one could find Kim for hours, [so] Brooke reached out to [more] family. All of Kim’s kids are concerned, not just Brooke

Richards’ manager and entertainment attorney both insist that their client is ‘fine’ and claim she is ‘working on a big project right now.’

However, a second source confirmed that Richards was taken to the E.R. at UCLA over the past few weeks. 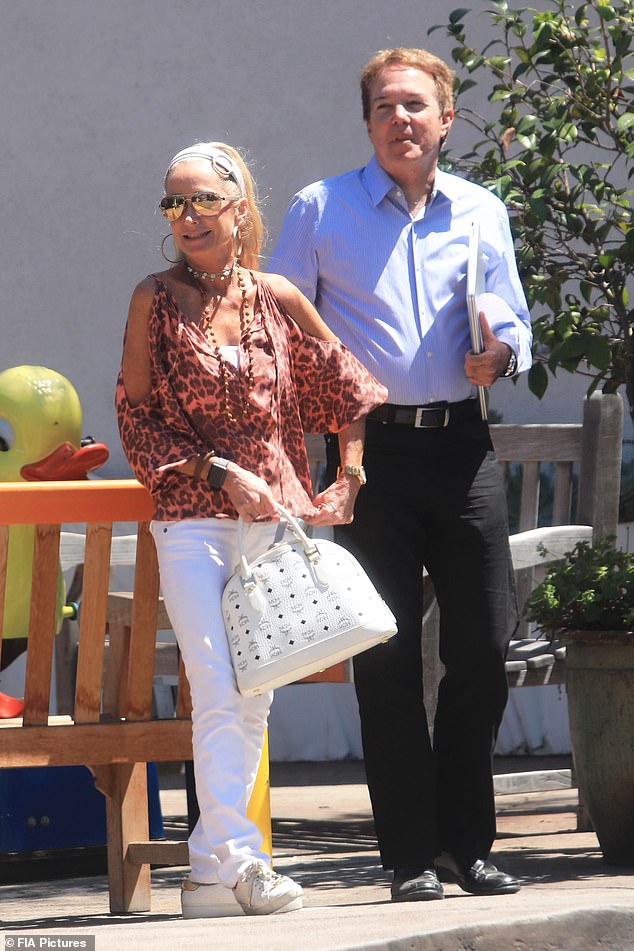 Struggling: While Kim’s manager insisted the star is ‘fine,’ it was reported she did visit UCLA hospital but ‘abruptly’ checkout against doctor’s advice

Just a day earlier it was also reported that Kyle had urged her sister to seek medical help, with a source telling the publication: ‘Kyle became aware that Kim was struggling in recent weeks and got extremely concerned based on what she was hearing.

‘It’s going to be an ongoing conversation, but the good news is that Kim is being extremely receptive to Kyle, recognising she is coming from a place of love.

‘Kyle isn’t giving up and is trying again to get Kim to agree. It’s more for mental health than sobriety issues.’ 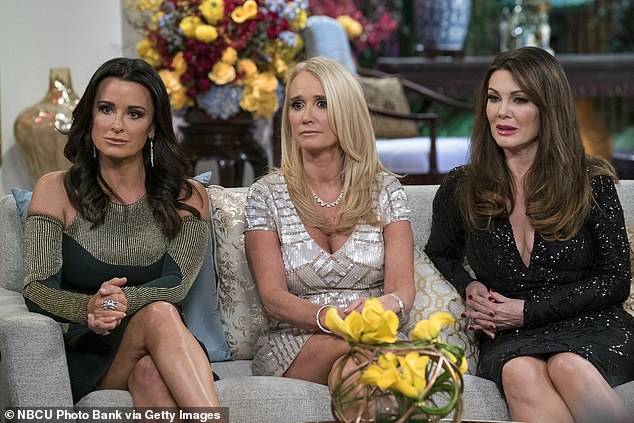