Katie Price hinted she’s pregnant with her sixth child on Saturday night, as she revealed that she’s embarked on a course of folic acid.

The former glamour model, 42, has been open about her efforts to conceive a child with 31-year-old partner Carl Woods, revealing she hoped to see in 2021 pregnant.

And on Saturday, she took to Instagram to share a snap of a bottle of folic acid, adding the caption: ‘Yep it’s that time, get ready @carljwoods. I love you boo.’ 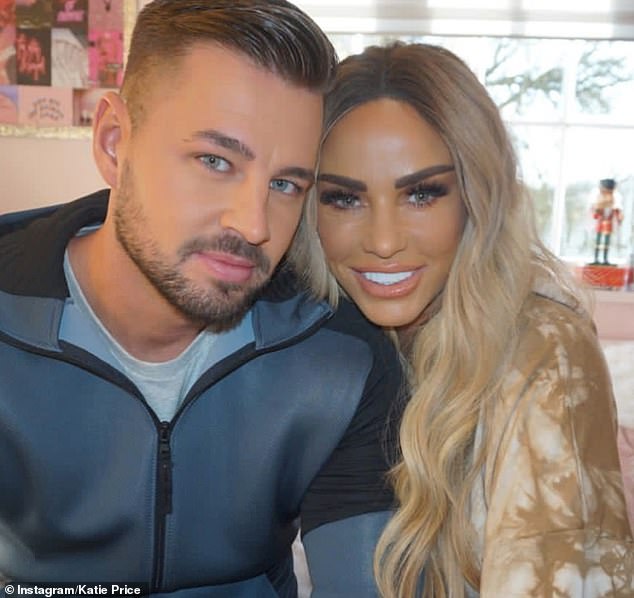 Folic acid is the synthetic form of folate, a naturally occurring B vitamin long known to help prevent birth defects when taken regularly by pregnant women.

States the NHS: ‘If you’re pregnant or trying for a baby, it’s recommended you take folic acid until you’re 12 weeks pregnant. It helps your baby grow normally.’

TV star Katie spent Christmas with her family and has been utterly inseparable from her new beau Carl since they went public with their romance in July. 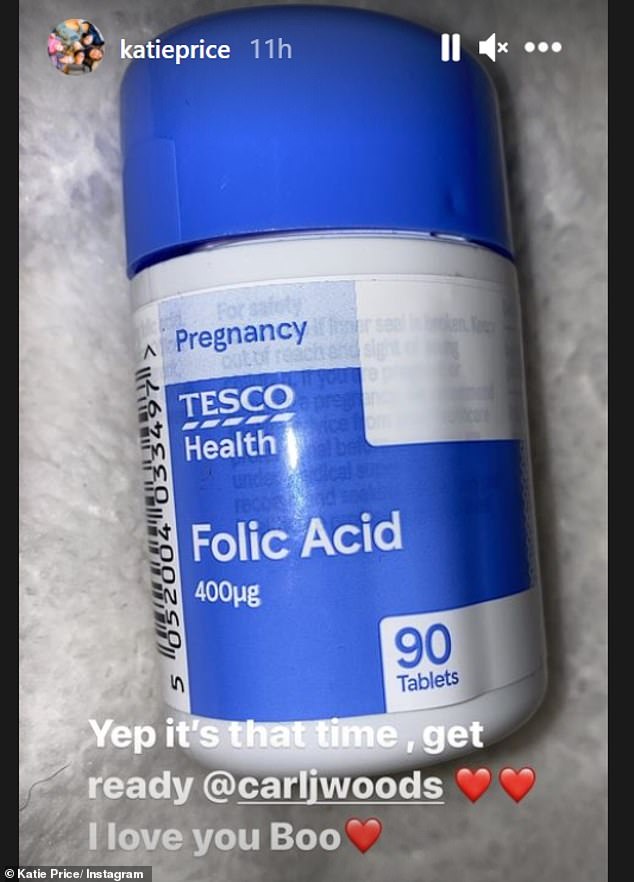 Get ready: On Saturday, she took to Instagram to share a snap of a bottle of folic acid, adding the caption, ‘Yep it’s that time, get ready @carljwoods. I love you boo’

Speaking of their relationship, she told The Sun last week: ‘It’s all happened really fast but I know Carl is the man for me, he’s the one.’

The mother-of-five said she and her beau of six months have been ‘trying’ for a baby, and she will find out if she’s pregnant on December 29 when her ‘period is due’.

She continued: ‘It would be amazing to enter the New Year with a baby on the way and a ring on my finger.

‘We’ve been trying — I’ll find out if I’m pregnant on the 29th because that’s when my period is due.’ 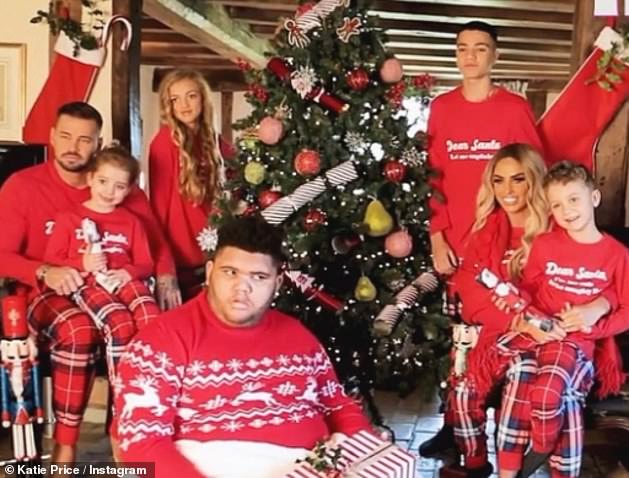 Family: Katie is already mother to Harvey, 18, Junior, 15, Princess, 13, Jett, seven, and Bunny, six, from three previous relationships. Pictured with her brood over the Christmas holiday

She explained that Carl did not propose at Christmas as it is ‘too cliché’ but that her boyfriend does have big plans to propose in 2021.

Speaking about her festive celebrations this year, Katie admitted she has experienced her first sober Christmas and said it makes her ‘sick’ thinking back on her past decisions.

Katie recently opened up about her decision to seek professional help and become an inpatient at The Priory – which she described as ‘the best thing she’s ever done’.

She bravely admitted that she got to ‘breaking point’ where she felt she ‘couldn’t cope’, but thankfully had a wake-up call and put herself into rehab.

And now, Katie said that there is no alcohol in her house at all and proudly admitted that she didn’t think about having a drink on Christmas day this year.

The TV personality was also declared bankrupt in November 2019, after the High Court found she had failed to stick to a plan to repay her debts, estimated to be around £800,000. 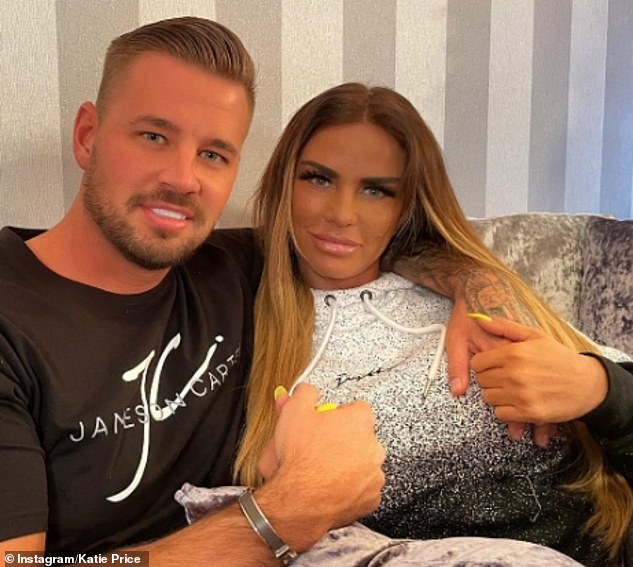 Baby making: The mother-of-five said she and her beau of six months have been ‘trying’ for a baby, and she will find out if she’s pregnant on December 29 when her ‘period is due’

Speaking about her bankruptcy, Katie quipped that the presents were from Santa due to her finances, joking her home was like Father Christmas’ grotto.

Katie and her loved ones enjoyed a Christmas meal of pizza this year as she wanted to focus on spending time with her five children and Carl instead.

It was previously reported that Carl spent £10,000 on an engagement ring for Katie in October and plans to ask her son Junior for his permission to marry her.

And Katie’s divorce from ex Kieran Hayler will be finalised in time for the New Year which will leave her free to marry Carl.

The reality TV star and her third ex-husband, 33, separated in March 2018 after five years of marriage and have been waiting almost two years for a divorce.

She shares her two youngest children Jett and Bunny with the  former stripper, Kieran.

While Katie is hoping to wed Carl as she awaits his much-anticipated proposal, Kieran is now engaged to his fiancée Michelle Penticost.

A source revealed that the final papers will be filed this week, meaning that Katie will again be single heading into the New Year. 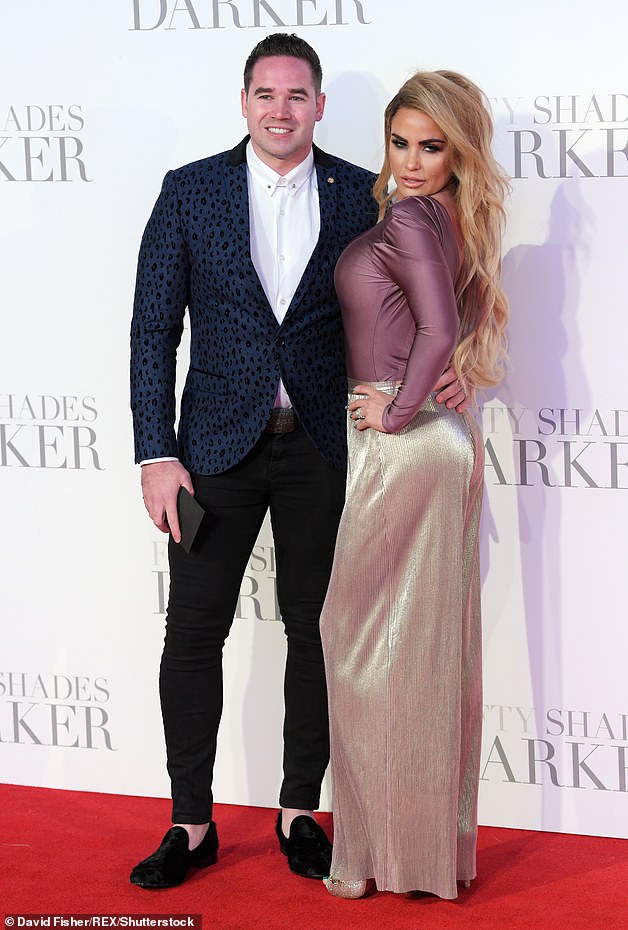 Ex: Katie’s divorce from her third ex-husband Kieran Hayler, who she separated from in March 2018, will be finalised in time for New Year, leaving her free to wed Carl (pictured in 2017)