‘I’ll have a glass of wine!’ Katharine McPhee, 38, reveals how she keeps spark alive with husband David Foster, 73, as pair seek to ‘reconnect’

Katharine McPhee has revealed a glass of wine is the secret to keeping the spark in her marriage to David Foster alive.

The actress, 38, who wed record producer Foster, 73, in 2019, said the pair will make time to ‘reconnect’ with one another on a regular basis, with the beauty indulging in a tipple as they talk.

She told Fox News: ‘I’ll have a glass of wine – he doesn’t drink – and we just talk. That’s our time together that we always make sure to have.. 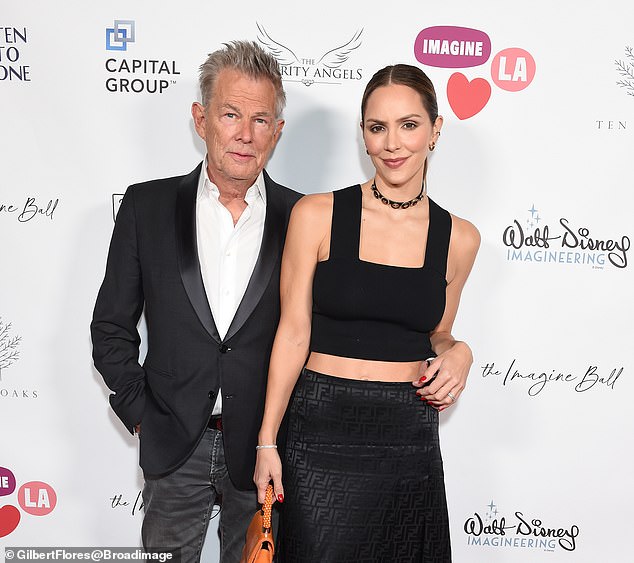 Couple: Katharine McPhee has revealed a glass of wine is the secret to keeping the spark in her marriage to David Foster alive (pictured September)

The couple are parents to son Rennie, who was born in February 2021, with Katharine adding their child forms the basis of many of their conversations.

She said: ‘There’s always something to talk about whether it’s our family, our son – it’s our time, We just want to reconnect.’

The star added the couple ‘love going to a movie or having dinner together’, saying: ‘There’s nothing extravagant about what we like to do. ‘

The pair, who first met in 2006 on American Idol, are now gearing up to release a festive EP, titled Christmas Songs. 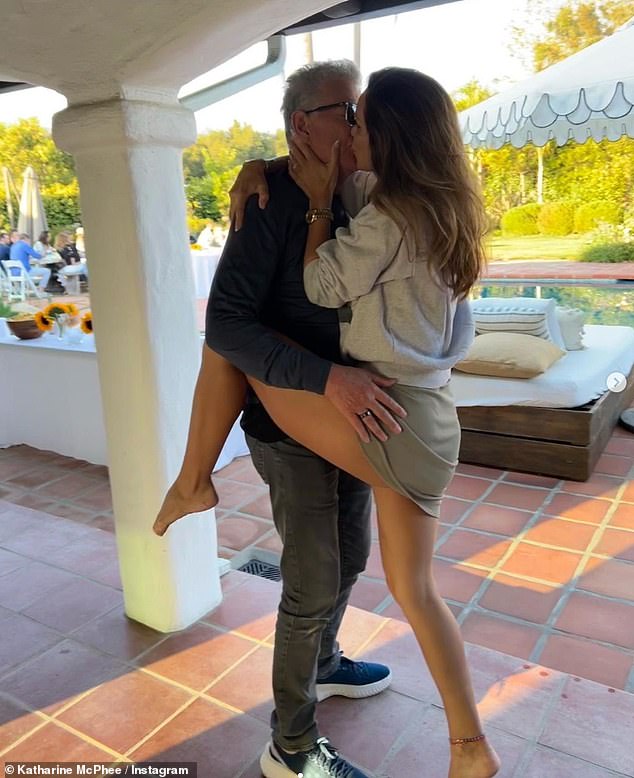 Oh my: The actress, 38, who wed record producer Foster, 73, in 2019, said the pair will make time to ‘reconnect’ with one another on a regular basis, with the beauty indulging in a tipple as they talk

David recently declared he has no misgivings about welcoming a baby in his 70s with his fifth wife Katharine.

He told People that although becoming a father again at his age was ‘not something’ he anticipated: ‘I haven’t regretted a single day of it.’

The legendary music mogul reflected: ‘I’ve loved every single day. It’s the standard thing of like: “Oh, well you were so young when you had your children and you were working day and night, you never saw them.”‘

He confessed to the magazine that ‘there is some truth to that, sadly, for my [older] kids. I was just working a lot. Even though I’m working a lot now, I’ll cancel anything just to hang with him. It’s just different.’

Katharine and David have drawn a great deal of attention for their age gap, which is so wide that she is younger than four of her stepdaughters.

In his new People interview David acknowledged that he and his latest wife are ‘an unconventional couple,’ but in his defense he invoked Celine Dion’s marriage to her late husband and manager Rene Angelil, who was over a quarter-century her senior. 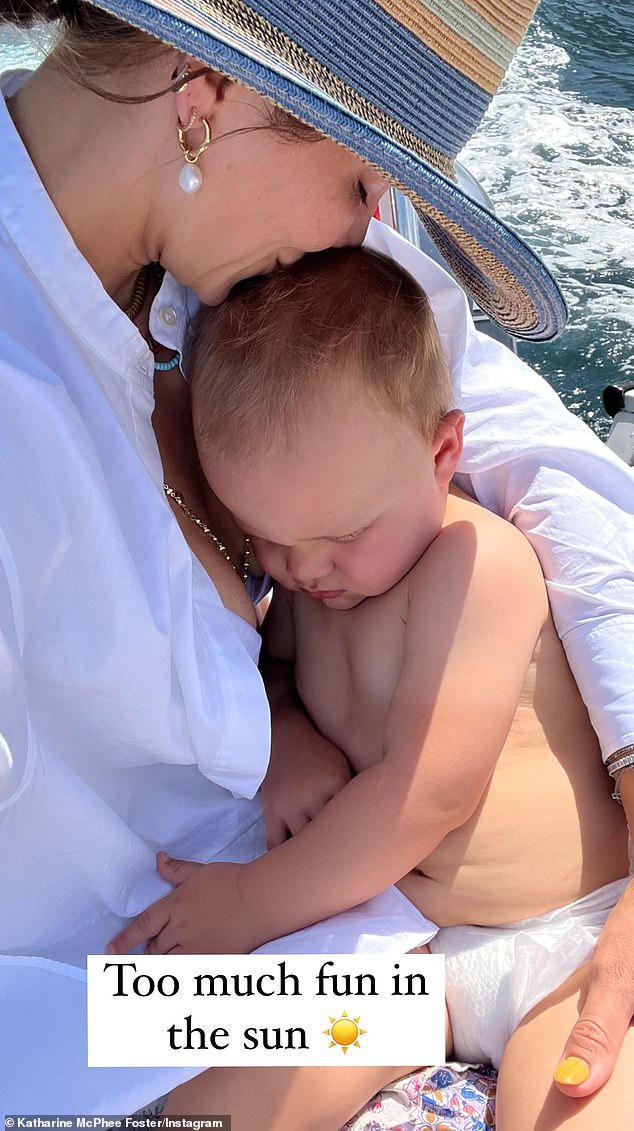 Family: The pair of them tied the knot in 2019 and last year welcomed their son Rennie, who celebrated his first birthday this February

Celine met Rene in Canada when she was a 12-year-old aspiring singer and he was already 38. Not long afterwards he became her manager.

His dedication to nurturing her career reportedly drove him to mortgage his home so that he could provide funding for her 1981 debut album La Voix du bon Dieu.

David and Katharine met in 2006 when he served as a mentor to a group of contestants including her on American Idol.

The season that brought them together aired from January to May 2006, during which time Katharine turned 22 and David was 56.

They ‘stayed friends through all these years,’ Katharine said – though during that time each of them went through a marriage and a divorce apiece.

Defending his marriage to Katharine, David said: ‘With Celine and Rene Angelil, there was a big age difference, and after I was working with them for a long time it just became Celine and Rene. It just looked and felt normal.’

He confessed: ‘But it was, of course, kind of odd in the beginning. But I think we’re over that hump now with five years of being together, and hopefully people just start looking like we belong together because we feel like we do.’

Katharine defiantly chimed in: ‘Even if they don’t, we don’t care. We just love our history, how we met and where we are now. Sometimes we look at each other like, ‘This is so wild that we’re together.’

They were giving their interview to promote her new Christmas album, which Katharine joked she ‘guilted’ David into producing.

“I said something like: “It’s really crazy I’m married to the greatest producer, basically of our lifetime, and I’ve only had you record me on a few songs.” Then he said: “OK, well, why don’t we just do a Christmas album?”‘ 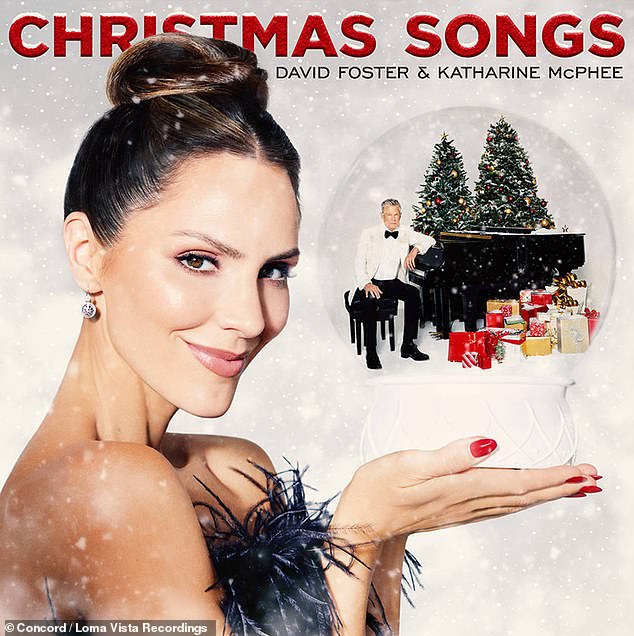 ‘Tis the season: They pair are promoting her new Christmas album, which Katharine joked she ‘guilted’ David into producing