Justin Bieber, 26, denies accusations of 2014 sexual assault of 21-year-old woman in Austin, Texas: ‘There is no truth to this story’

Justin Bieber has denied sexual assault allegations that were made about him over the weekend.

On Saturday, a woman named Danielle alleged in a Twitter statement that she had been assaulted by the singer on on March 9, 2014 at the Four Seasons hotel in Austin, Texas, following the star’s appearance at South by Southwest festival.

The following day, Justin, 26, also used the micro-blogging site to dispute the claims, providing evidence that he says proves he was not there. 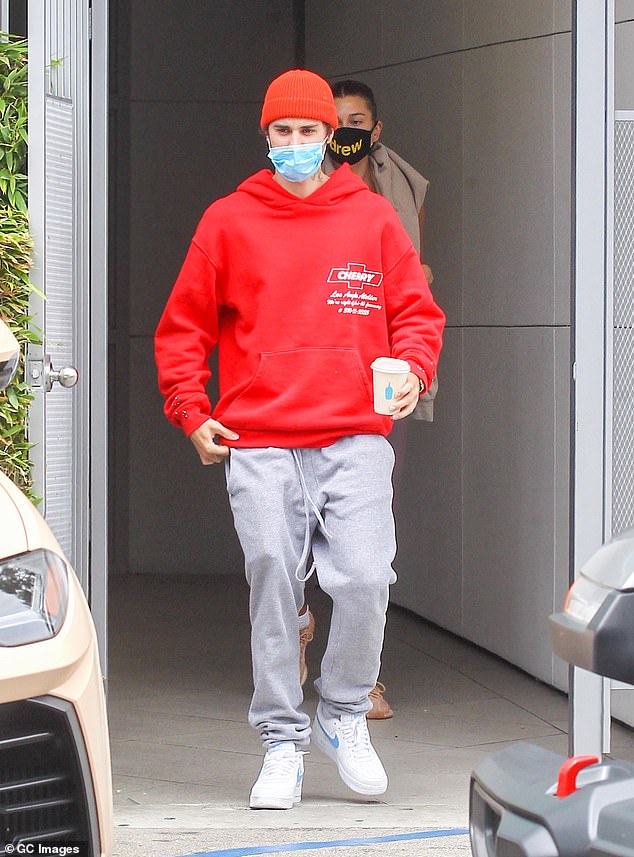 Out and about: Justin Bieber and his wife Hailey Baldwin were seen Saturday in LA. The singer took to Twitter on Sunday to deny sexual assault allegations 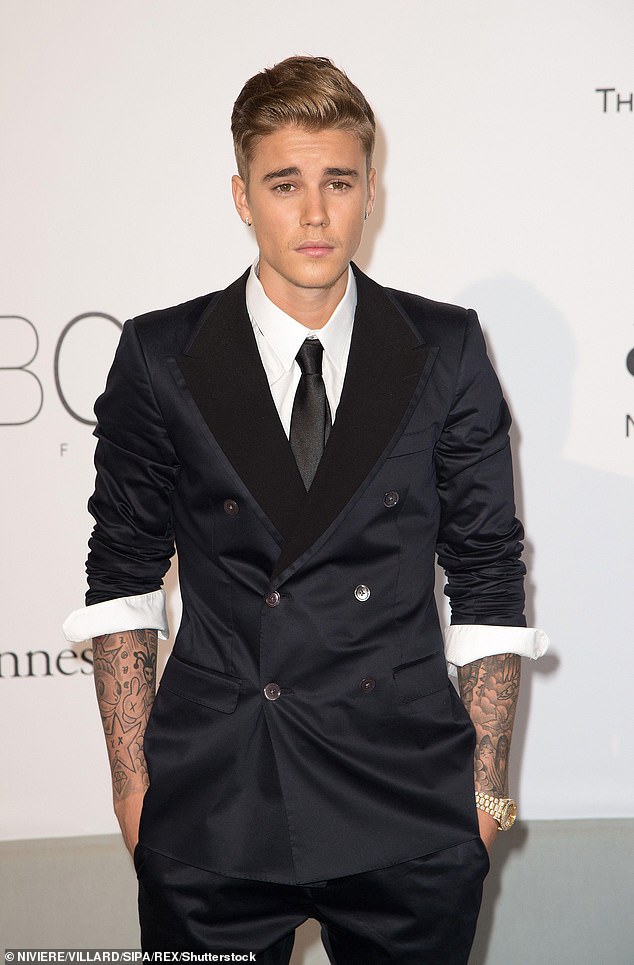 Back in the day: Bieber is seen at the Cannes Film Festival in May 2014 just days after the alleged incident

Danielle described the alleged sexual assault in detail in a post she put up Saturday.

She penned: ‘My friends and I were enjoying ourselves the entire night. A man then approached me and my friends and asked us if we wanted to meet Justin. Of course we said yes.’

Danielle said Bieber asked she and her group to go back to his room at the Four Seasons. She said she was 21-years-old at the time while Bieber was one year younger at 20.

‘Justin had made me agree to not say anything to anyone, or I can get in serious legal trouble,’ Danielle said. ‘He then asked me to join him in bed. That’s when I asked myself, “How in the world is this normal?”‘ 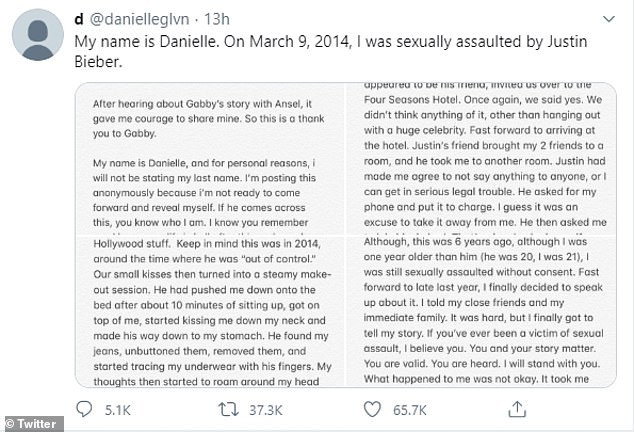 Danielle said that she agreed to kiss him but aimed to avoid ‘going too far’ sexually with Bieber: ‘My body felt unconscious. I don’t want to go into detail about what happened next.’

Bieber took to Twitter Sunday with a series of statements denying the allegation and offering evidence he said proves he was not at the location she claimed he was at.

‘I don’t normally address things as I have dealt with random accusations my entire career but after talking with my wife and team I have decided to speak up on an issue tonight,’ he wrote. 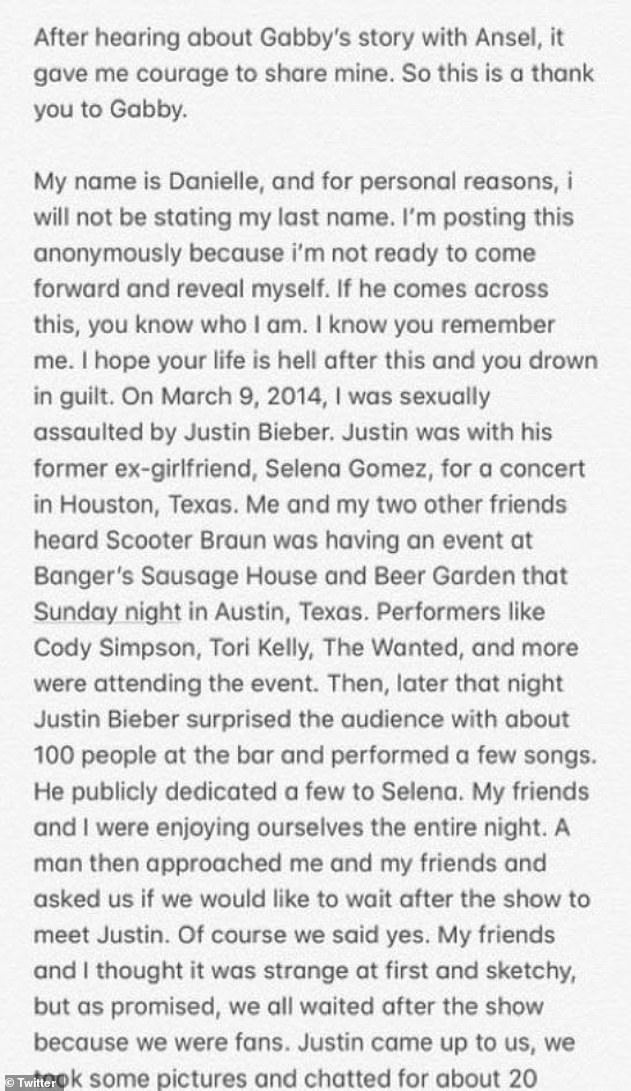 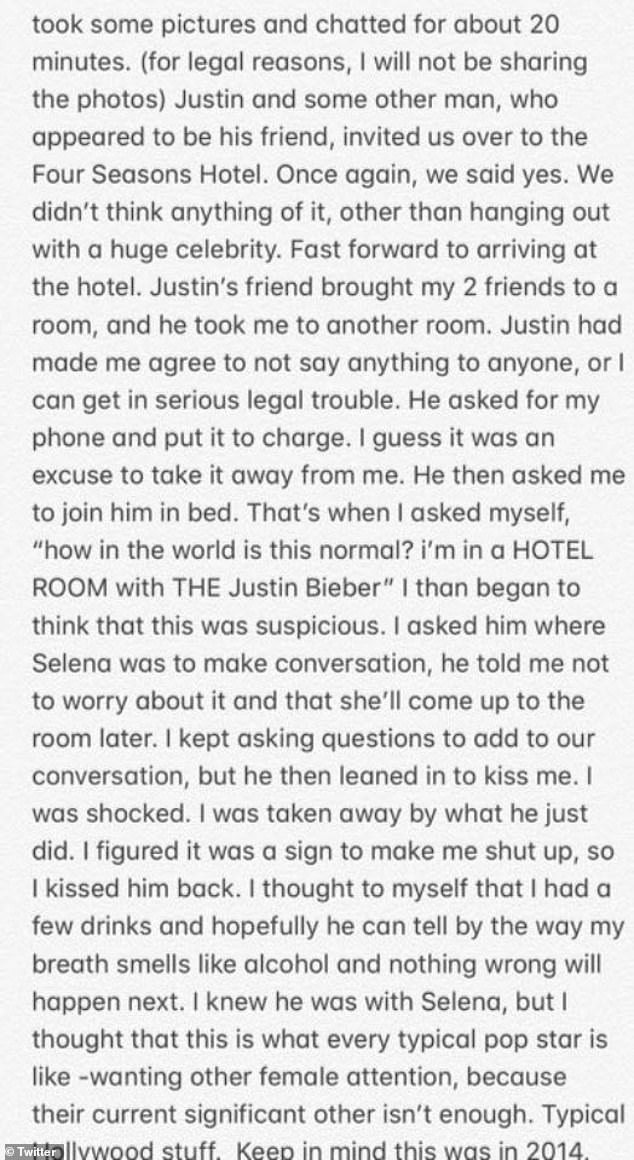 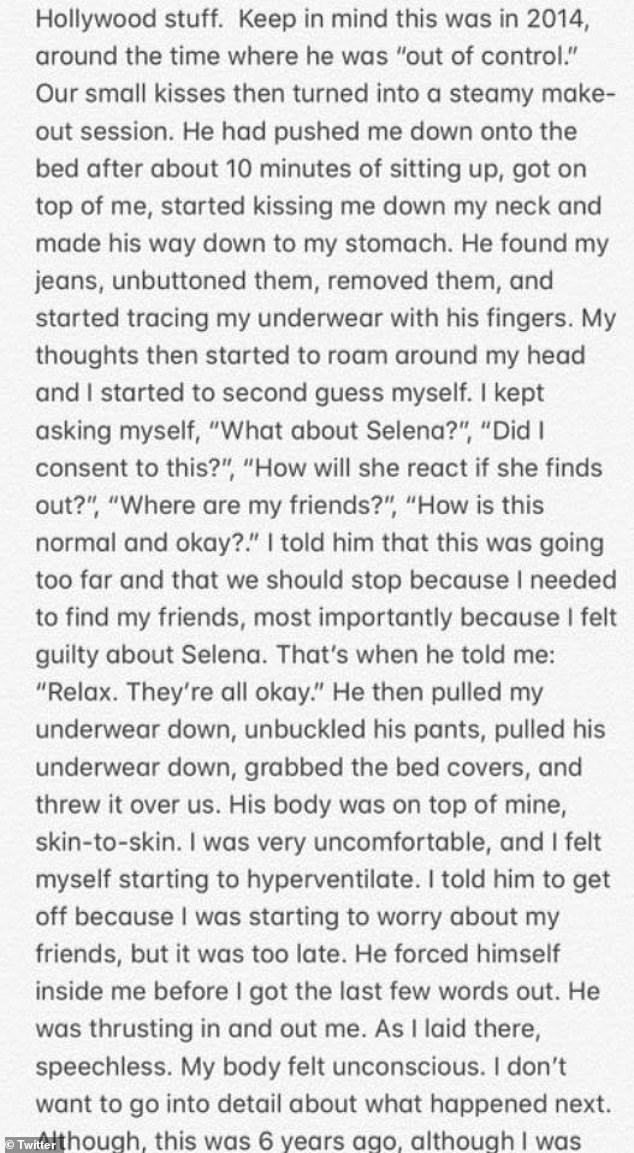 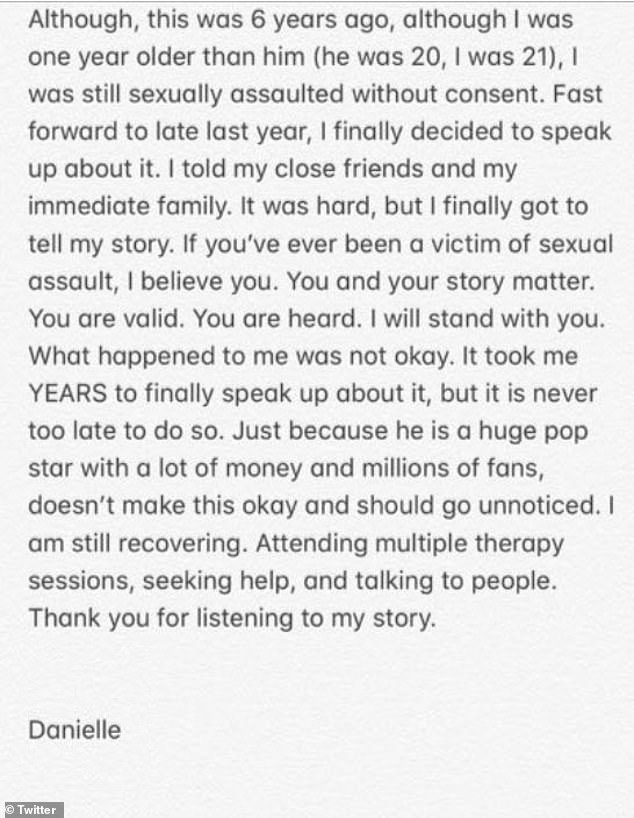 The woman described the alleged incident in detail

‘Rumors are rumors but sexual abuse is something I don’t take lightly. I wanted to speak out right away but out of respect to so many victims who deal with these issues daily I wanted to make sure I gathered the facts before I made any statement.’

The Canadian recording artist continued: ‘In the past 24 hours a new Twitter appeared that told a story of myself involved with sexual abuse on March 9, 2014 in Austin Texas at the Four seasons hotel.

‘I want to be clear. There is no truth to this story. In fact as I will soon show I was never present at that location.’

Retort: Bieber took to social media to deny the sexual assault accusation aimed at him

Bieber confirmed he did perform locally but was accompanied by his former girlfriend Selena Gomez to the event.

‘As her story told I did surprise a crowd in Austin at Sxsw where I appeared on stage with my then assistant side stage and sang a few songs. What this person did not know was that I attended that show with my then [girlfriend] Selena Gomez,’ he said.

Bieber posted a series of tweets with stories, pictures and receipts he said were consistent with his claim he wasn’t at the Four Seasons, but rather at an Airbnb and then the Westin on the nights of March 9 and 10, 2014, respectively. 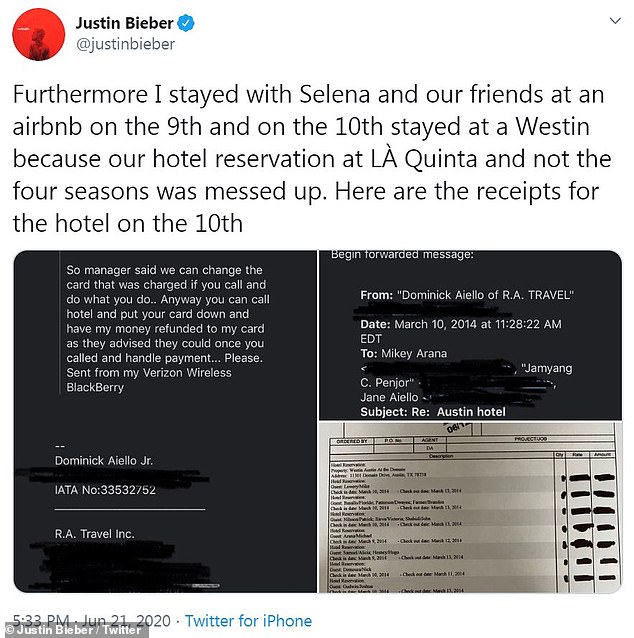 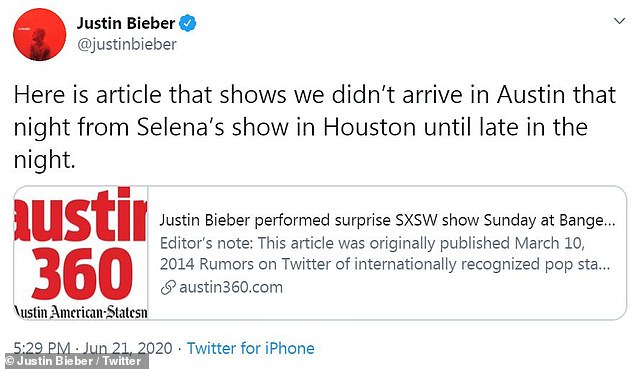 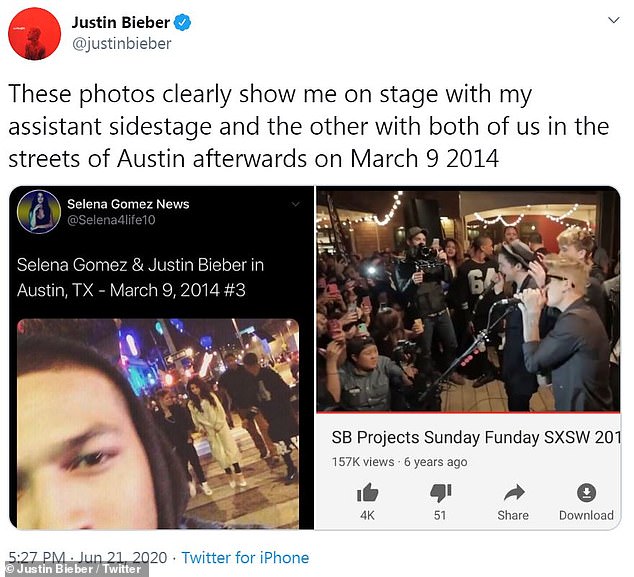 Bieber said he will seek legal action against his accuser in the case.

‘Every claim of sexual abuse should be taken very seriously and this is why my response was needed,’ he said.

‘However this story is factually impossible and that is why I will be working with twitter and authorities to take legal action.’

While Justin is now married to Hailey Baldwin, he was in an on and off relationship with Selena Gomez between 2010 and 2018.

Following their final breakup, Justin shocked fans when he quickly turned his attentions to Hailey, before marrying her in 2018.

Bieber hinted at some of his issues in a candid and lengthy Instagram post in September of 2019.

He spoke about his past of ‘doing pretty heavy drugs,’ ‘abusing all of my relationships’ and being ‘disrespectful to women’.

The Canadian singer also spoke about being overwhelmed by life and how child stardom had left him ‘a shell of a person’ unequipped for the pressures and responsibilities his success would bring. 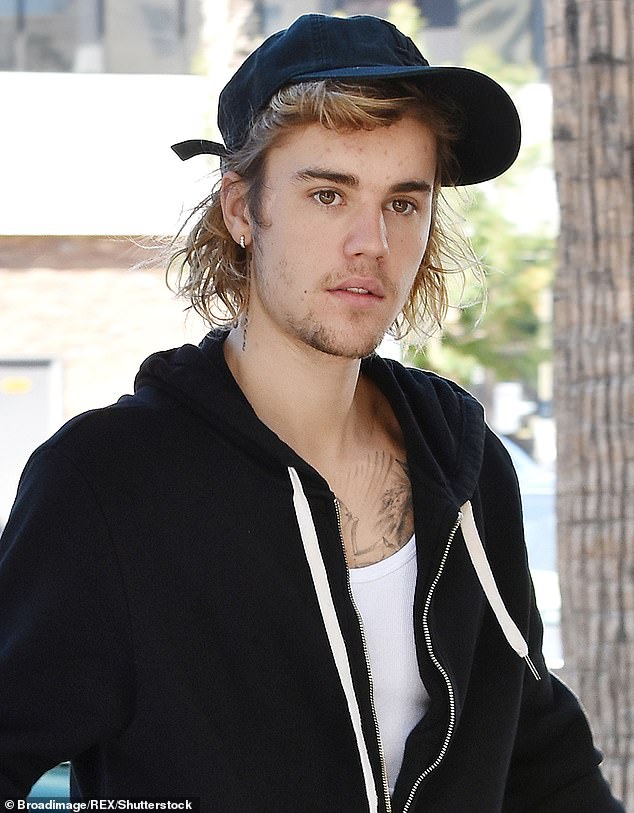 Looking ahead: The singer, snapped in 2018, says he will seek legal action against his accuser in the case

Justin and Selena first started dating in late 2010 but broke up in late 2012.

They reconciled a few weeks later but continued to date and break up on and off through 2015.

‘I started doing pretty heavy drugs at 19 and abused all of my relationships,’ he explained.

‘I became resentful, disrespectful to women, and angry. I became distant to everyone who loved me, and I was hiding behind a shell of a person that I had become.’

‘I felt like I could never turn it around,’ he said. ‘It’s taken me years to bounce back from all of these terrible decision, fix broken relationships, and change relationship habits.’ 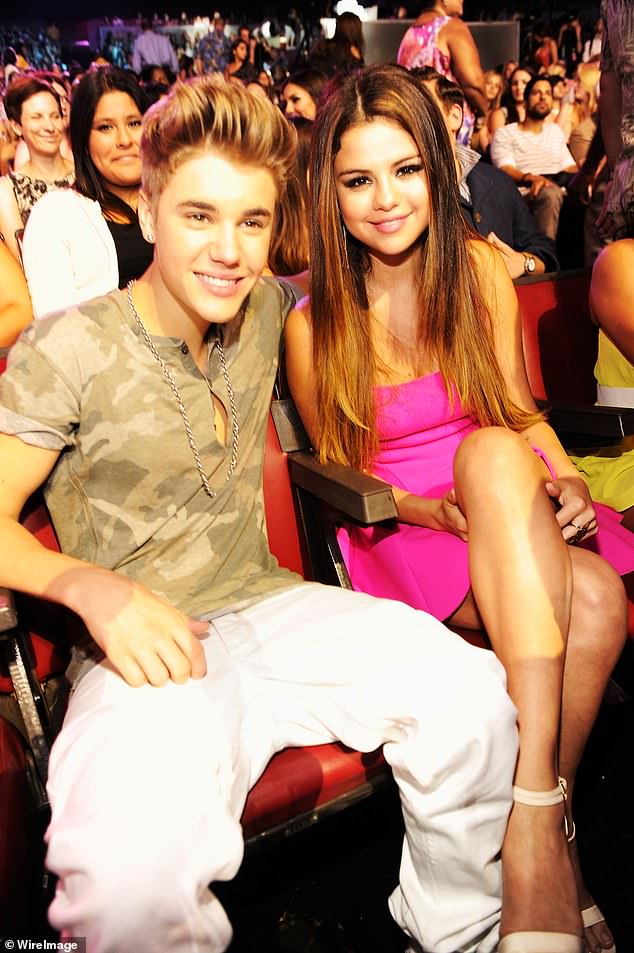 Former flame: Justin was in an on and off relationship with Selena Gomez between 2010 and 2018 and said he was with her the night of the assault claim (pictured in 2012)

Bieber and Gomez appeared to reunite in 2017 but by March 2018 they had gone their separate ways again, and in September 2018, he wed Hailey in a low-key civil ceremony in New York.

In January, Selena claimed that she had been the victim of emotional abuse during their relationship.

‘Yes, and I think that it’s something that — I had to find a way to understand it as an adult,’ she told NPR.

‘As much as I definitely don’t want to spend the rest of my life talking about this, I am really proud that I can say I feel the strongest I’ve ever felt and I’ve found a way to just walk through it with as much grace as possible,’ Selena concluded. 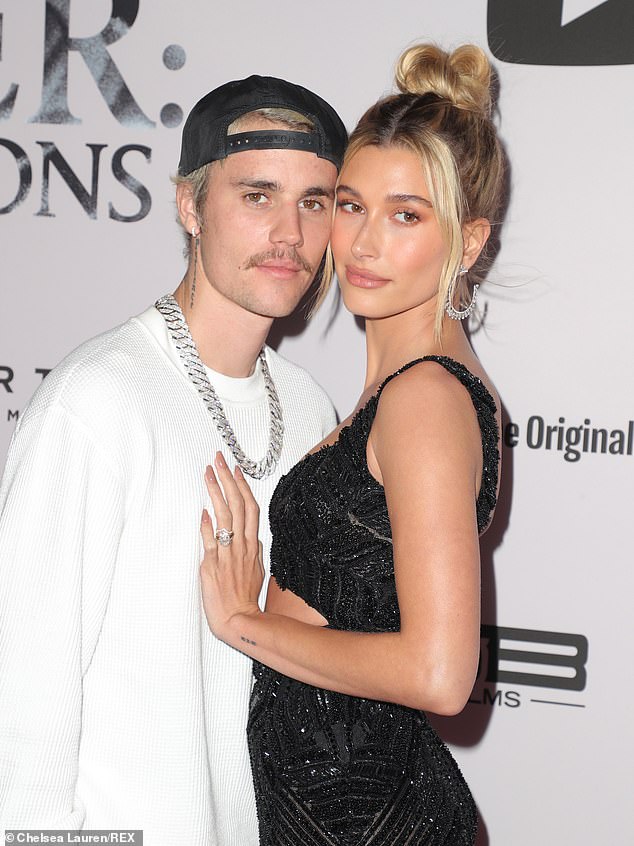 Married: Justin married Hailey Baldwin the year of his final break up from Selena