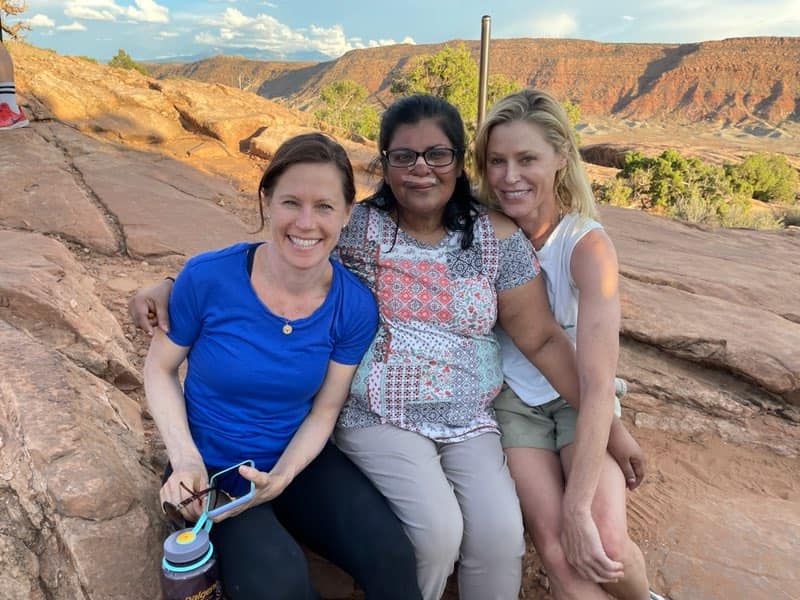 What would you do if you woke up from a fainting spell to see a celebrity tending to you? This is what happened to Minnie John of New Jersey. Minnie went on a hike with her family in Arches National Park in Utah. Minnie pushed herself to complete the hike and once she got to the top of the mountain, she fainted because her blood sugar dropped due to her diabetes. Minnie had sent her son and husband ahead so they weren’t around to assist. Julie Bowen and her sister Annie, a doctor, was there to assist after their hiking guide saw Minnie pitch forward. Below are a few more details from Entertainment Tonight:

“I sat there holding my head in [my] hands and waited,” she wrote. “… [My group was] called back by some people running up to them. All I remember is sitting there with my head in my hands secure on the rock.”

John next heard “someone with a familiar voice” asking her questions. She was confused and wondered if she “might be watching TV.”

After the mystery person and her hiking companion assured John that she’d be fine, she sat up and opened her eyes. It was only then that John put the pieces together, and discovered that the woman was Bowen, who was traveling with her sister, Annie, who’s a doctor.

“That face looked so familiar again and I asked her again if I knew her or was she famous and the doctor said yes. As my eyes started to focus more, she smiled and took her hair tie off and shook her hair for me to figure out,” John wrote. “Her sister the doctor asked me to guess and I told her I just hit my head, I can’t remember. She said smiling Modern Family and I said of course! I told her she was so beautiful.”

As John began to feel better, Bowen and her sister explained that their guide had seen John fall forward, break her glasses, hit her head, and cut her face on the rocks. The sisters had cleaned up her face, John wrote, and used her cell phone to call her husband. In her post, John shared photos of herself, bandaged face and all, posing alongside the sisters.

John continued her post by crediting God with the sisters’ appearance in her life.

“The guide who was with the two famous sisters saw me fall forward. At the right time with no delay He sent the doctor and helpers. He restored me with sound mind and a joyous meeting with my helpers,” she wrote. “They were so caring and loving to stop like the Good Samaritan does in the Bible! They were God sent! It was no accident they were there. They gave me electrolytes, medicines and pretzels with peanut butter.”

Her fainting spell, John wrote, happened because her sugar got low, which was problematic due to her diabetes.

“I told my Samaritans that I was so proud of what I had achieved climbing to the top,” John wrote. “Had I known it was so treacherous, I would not have done it, but I was so proud I reached the top and got to meet my good Samaritans God sent for me at the right moment.”

You all know that I love good Samaritan celebrities. This has got to be one of my favorite stories I have read in a while. Julie and her sister could have easily stayed out of it, but being good people who saw someone in distress, they chose to help Minnie out despite the dangers (COVID) and exposure (rabid fans). It was so cute that Annie and Julie checked Minnie’s awareness by getting her to guess who Julie was and what show she starred in. The fact that Julie and Annie also later took the time to take pictures with Minnie was icing on the cake. I am glad that Minnie only had minor injuries and that she was able to share her story. I hope that if I find myself in medical distress that G-d sends me some high profile good Samaritans like Julie and Annie. In the mean time, I will continue to chuckle at the cuteness of this story that could have gone sideways but had a happy ending.