The singer, 34, displayed her jaw-dropping figure in the sizzling snaps where she donned a variety of garments from the fashion line.

In one look, Jessie showcased her toned midriff in a navy two-piece with a shimmering floral print. 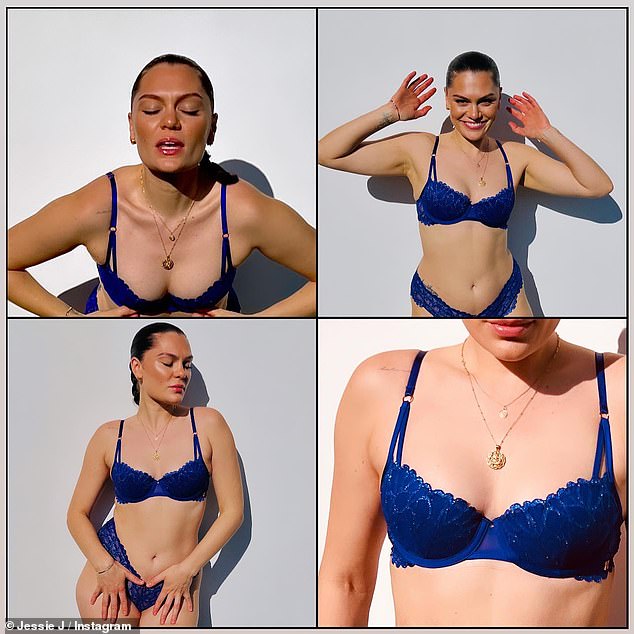 The Price Tag hitmaker also sported a gold necklace and wore her brunette locks in a slicked back ponytail.

In another look, she sported lime green lingerie along with a matching pair of silk gloves while posing for the camera.

In a third outfit, the star opted for a black two-piece which she wore under a matching sheer cover up.

Alongside the post, she playfully wrote: ‘The way these sets make my itty bitty t*****s feel pretty’. 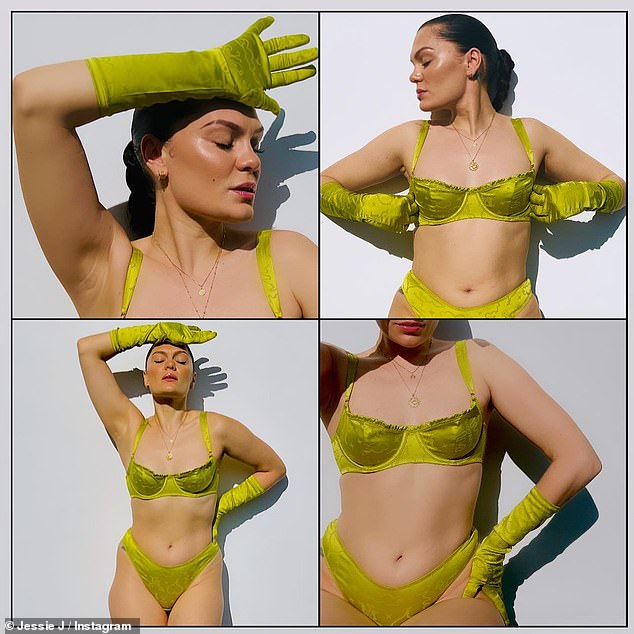 Flawless: In one look, she sported lime green lingerie along with a matching pair of silk gloves while posing for the camera

Earlier this year, Jessie told how she is trying to conceive a child and said her ‘body is changing shape’ as a result.

The singer became pregnant with her first child last year after trying for a baby ‘on her own’ but announced in November she had miscarried.

Speaking to the crowd at a London gig in July, the Price Tag hitmaker reflected on her recent ‘weight gain’ and told fans she has never felt more body confident.

She said: ‘I have gained weight and I’ve not been to the gym in ages, but honestly, I feel great. I’m not 17 anymore and I want to make a baby and I am trying to do that and my body is changing shape.’ 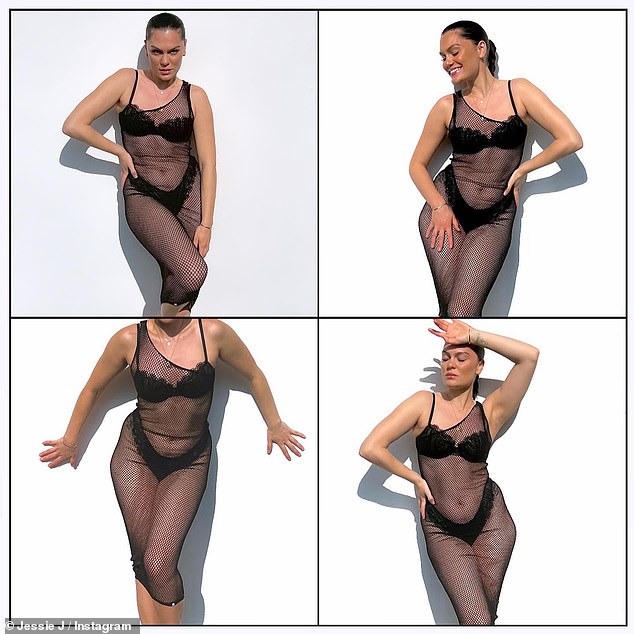 Beauty: In a third outfit, the star opted for a black two-piece which she wore under a matching sheer cover up

The Sun reported that the star opened up to the crowd about her future plans, admitting to her fans that she finally feels at ease in her life after years of being ‘lost in Hollywood.’

Gesturing to the glittering catsuit she was wearing, Jessie recalled ‘putting on a bikini and dry humping a horse in Price Tag… and being 34 in this outfit is different now’.

She also told the crowd: ‘I feel like people understand me more than they did ten years ago. It wasn’t easy to write songs about things like being in the club or boys. It isn’t who I am.’

‘Everybody wanted me to write those songs. I was in LA by myself and I remember looking in the mirror and being obsessed with being perfect. I felt like I had to be who people wanted to be accepted. 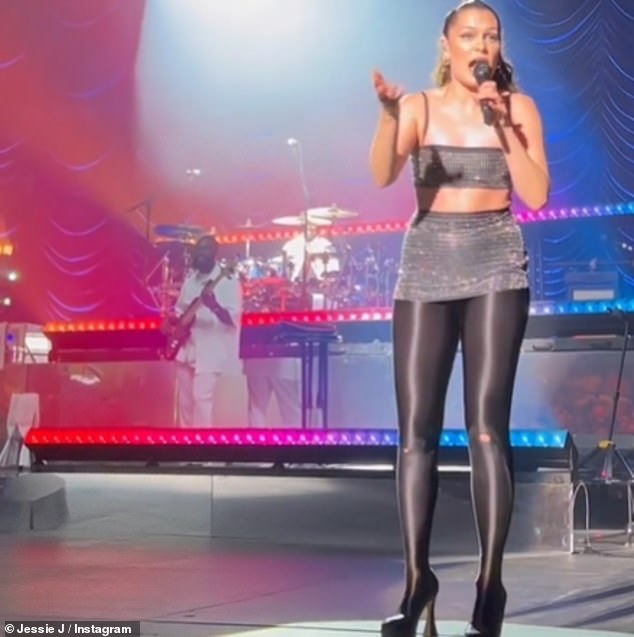 Feeling good: Jessie recently revealed she’s trying to conceive a child as she admits she’s never felt more body confident, while speaking candidly at a London gig in the summer

‘This whole celebrity thing is so weird to me and how people are even more obsessed with how I look than I am.’

Jessie revealed in November 2021 that she had been pregnant with her first child after trying for a baby ‘on her own’ before she miscarried, announcing the loss on Instagram.

Offering a very candid insight into her ordeal, Jessie told The Diary Of A CEO Podcast in May that the aftermath left her feeling overwhelmingly lonely and without ‘anyone to fall apart on.’

The chart-topper still proceeded to perform an intimate gig in Los Angeles only a day after receiving the heartbreaking news and sharing it online. 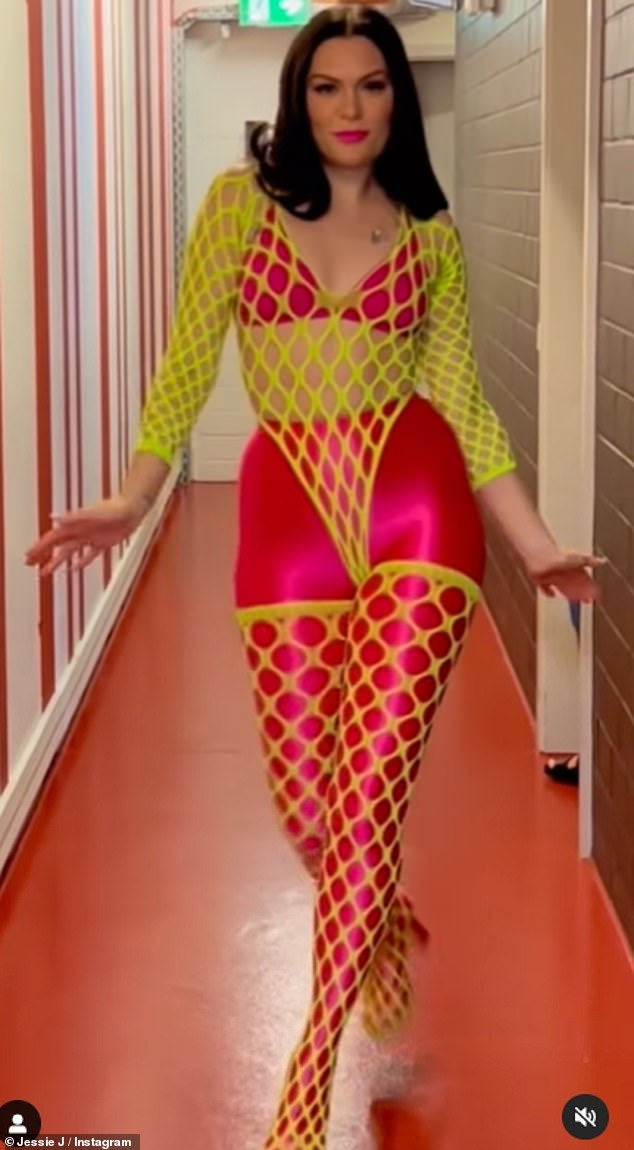 Body confidence: Speaking to the crowd at Koko in Camden, the Price Tag singer reflected on her ‘changing shape’ and ‘weight gain’ recently (pictured backstage on July 14)

‘I was by myself, I had no one advising me, my mum and my sister weren’t there to go, ‘no, don’t share this with the world, make it real for you first’.

One doctor had warned Jessie that the baby’s heartbeat was ‘very low’, but devastatingly it was too late by the time she’d sought expert advice from a second medical professional.

The BRIT School alum confessed her immediate thoughts turned to, ‘how am I going to get through tomorrow’s show?’, rather than what had happened. 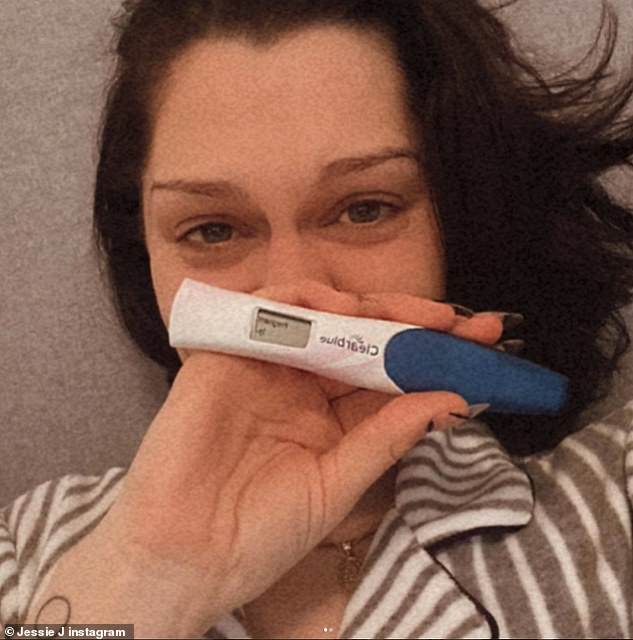 Heartbreak: Jessie fell pregnant with her first child after trying for a baby ‘on her own’ but announced in November that she had miscarried (pictured November 2021)

‘The hardest part for me wasn’t doing the show, the show was actually kind of a weird trippy dream, and I was actually grateful that I wasn’t by myself, and loads of people that I loved turned up,’ she remembered.

She added: ‘It was when I got in the car after the show by myself, and I got home, and I opened my front door, I closed the door and I fell to my knees.

‘That was the worst moment of my whole experience was realising that, other than my career, being a mother and having a child has been the biggest excitement of my life.

‘I felt like I’d been given everything I’d ever wanted and then someone had gone, ‘but you can’t have it’. The confident star said: ‘I have gained weight and I’ve not been to the gym in ages, but honestly, I feel great’

‘But it was still there, and I would sing to it every night, and when I got home and I lay there, I’ve never felt so lonely in my life.’

Months on from the tragedy, Jessie has admitted during the May interview that having a child on her own was no longer on her radar.

She explained: ‘It was the saddest thing, but at the same time, I knew that the reason it happened was because I wasn’t supposed to do it alone… I know that I’m supposed to find someone who wants this as much as I do.’

In April Jessie confirmed she was dating basketball player Chanan Safir Colman, when she was spotted kissing him on a lunch date in Los Angeles.

The happy couple first sparked romance rumors in March on Richard Branson’s Necker Island in the Caribbean as Chanan had joined Jessie for the work trip.

Jessie took to Instagram at the time and looked cosy with Danish-Israeli professional basketball player Chanan in a group beach picture. 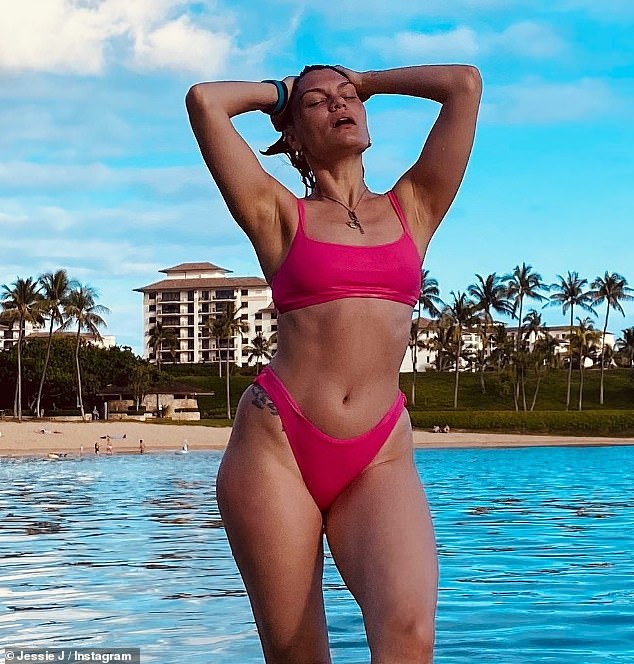 Happy: She also told the crowd that ‘I feel like people understand me more than they did ten years ago. It wasn’t easy to write songs about things like being in the club or boys. It isn’t who I am’ (pictured in 2021)

When appearing on The Diary of a CEO podcast, the singer teased fans about her love life but kept the details private.

Jessie was asked by host Steven Bartlett how many times she’d been truly in love and she replied ‘once’, answering in the present tense, hinting she saw her future settled with Chanan.

She continued: ‘Because I can actually see my life with that person and I’ve never had that before.’

In October Jessie announced she had split from dancer Max Pham after seven months of dating.

Jessie started dating choreographer Max last year, after her split from actor Channing Tatum who she had an on/off relationship with from October 2018. 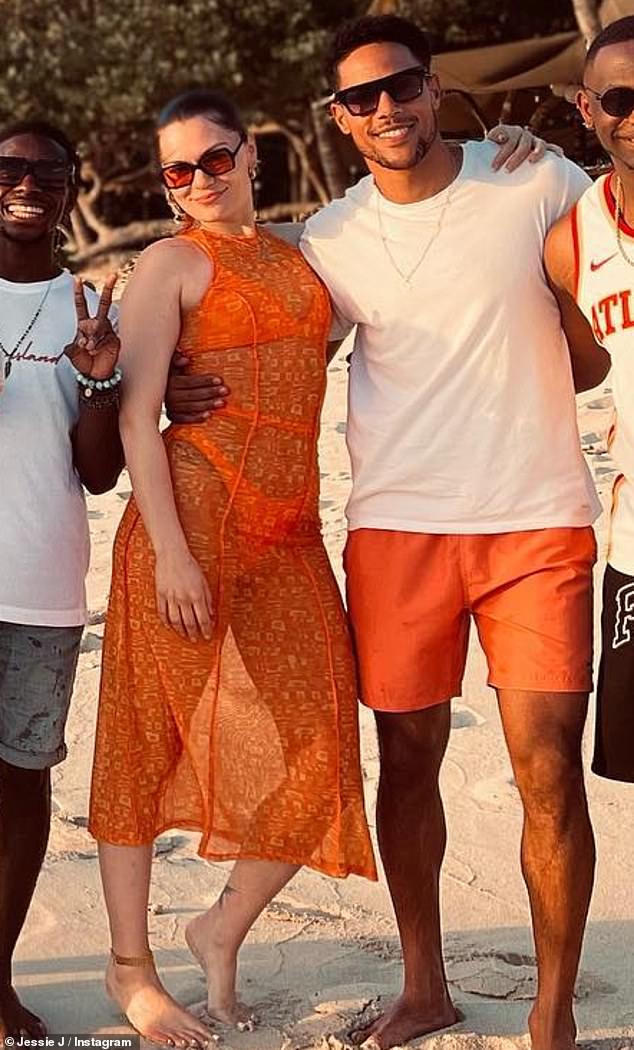