Jennifer Lopez, 49, reveals what she eats for lunch as she tucks into a simple salad, chicken and a tray of finger sandwiches

Jennifer Lopez was on a 10 day no sugar and no carbs diet in January that helped her shed five pounds.

But on Tuesday the Hustlers star looked to be very much off that diet and eating an array of foods that included carbs.

The 49-year-old singer was seen in a video shared by her beau Alex Rodriguez as she was consuming a light salad with field greens and radishes and a variety of lean meats with a side plate of finger sandwiches. 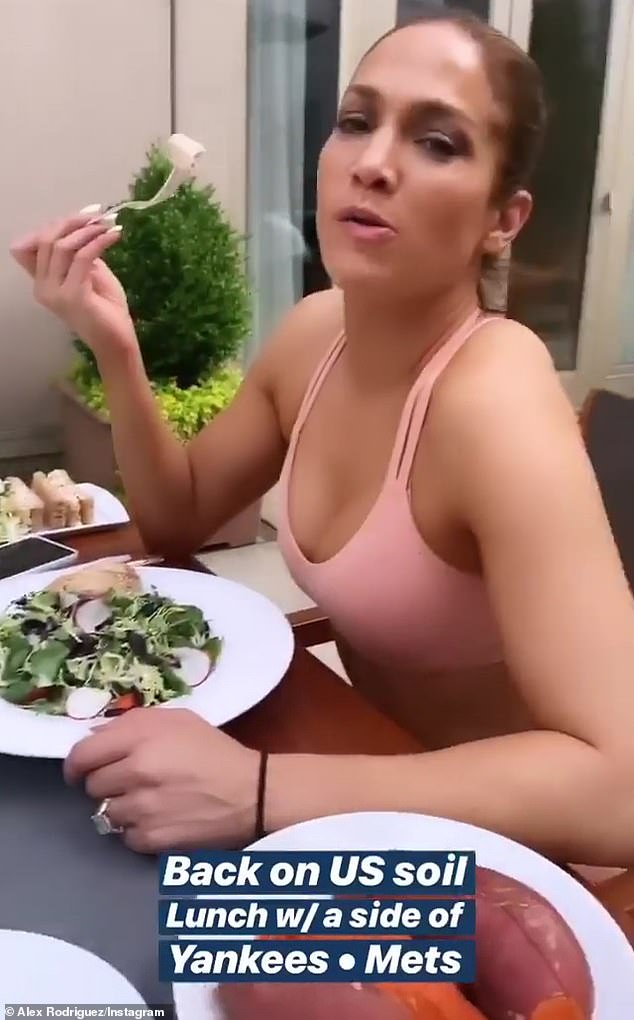 Hungry woman: Jennifer Lopez was on a 10 day no sugar and no carbs diet in January that helped her shed pounds. But on Tuesday the star looked to be very much off that diet and eating an array of foods that include carbs 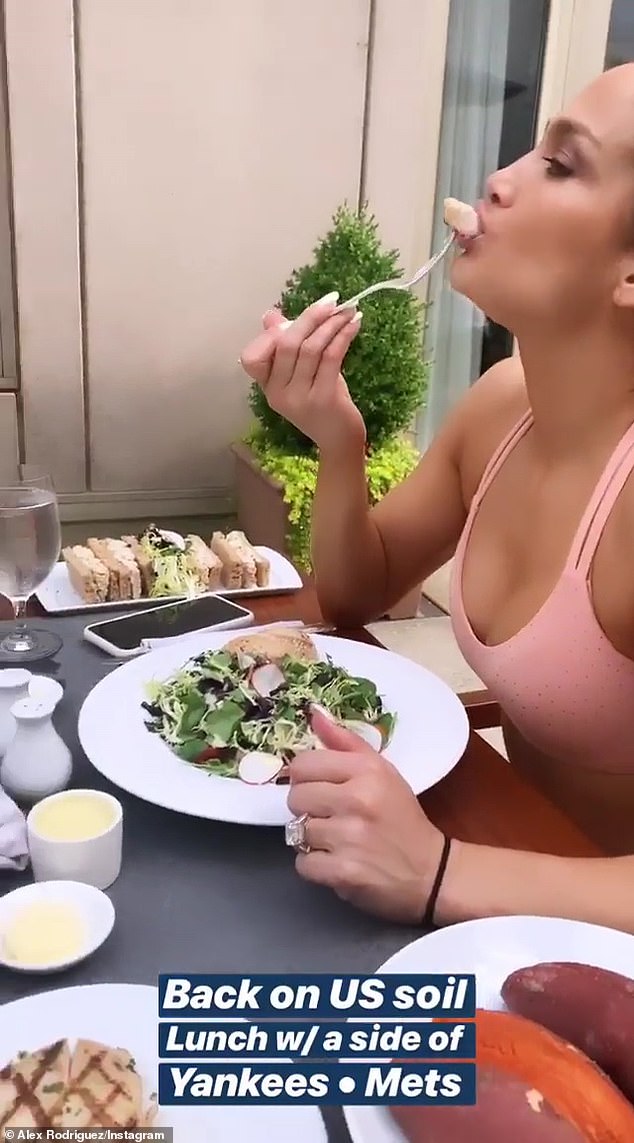 Her choices: The 49-year-old singer shared a video from her dinner table that revealed she was consuming a light salad with field greens and radishes and a variety of lean meat with a side plate of finger sandwiches

The star said she was back in the states – though it is not known where she had traveled – and watching baseball on a TV near her meal. She is engaged to Rodriguez who used to be with the New York Yankees.

The siren had on a pink tank top that showed off her sculpted arms. And she pulled her hair back into a ponytail.

She has been touring all summer for her 50th birthday celebration.

The Amor Amor Amor singer was wearing her large diamond engagement ring from Alex; they are reportedly set to wed later this year. 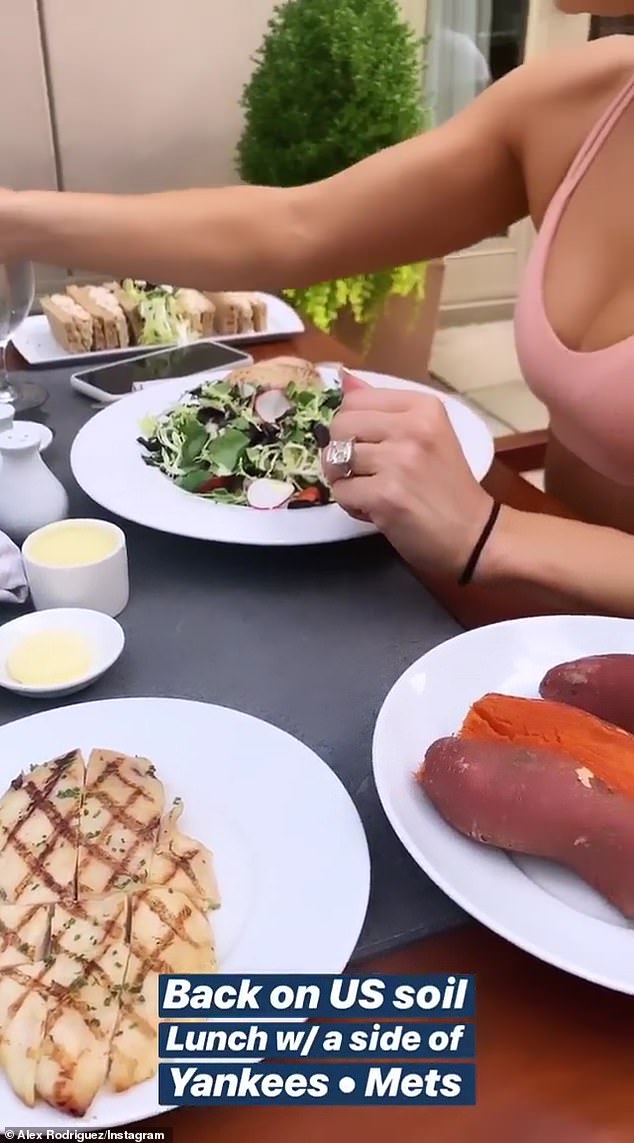 Bling: The Amor Amor Amor singer was wearing her large diamond engagement ring from Alex; they are set to wed later this year

The crooner was last in Texas for her It’s My Party tour.

Six months ago she completed the diet challenge and congratulated everyone who had taken part on the tough journey.

Taking to social media, the songstress revealed she and Rodriguez did find the challenge difficult but were already looking into starting up a second round in a few days time. 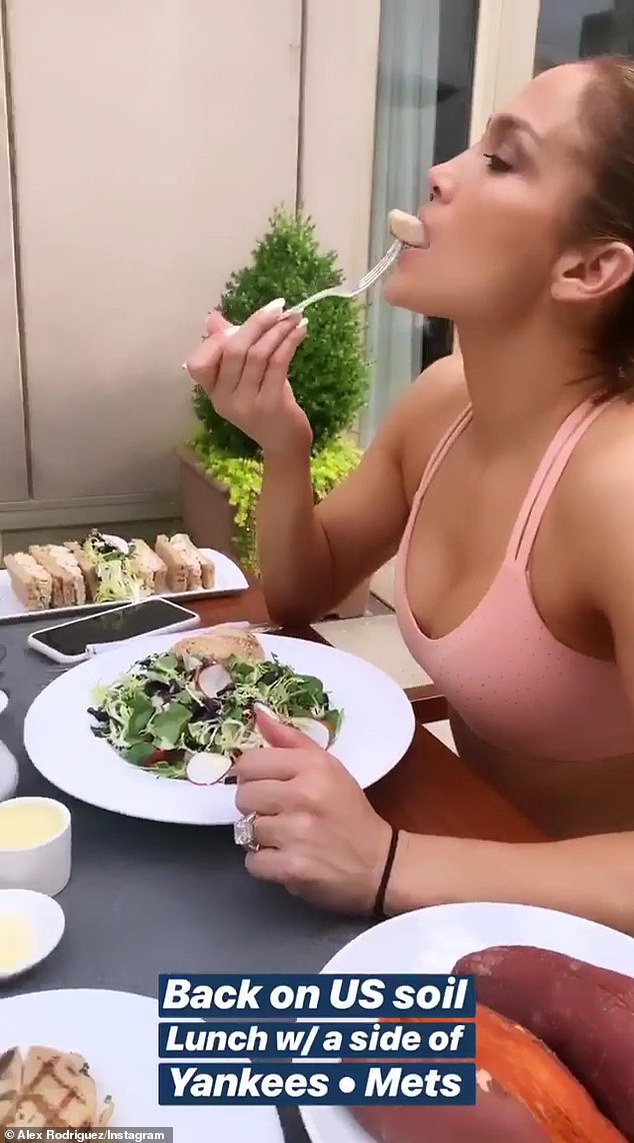 Le look: The siren had on a pink tank top that showed off her sculpted arms. And she pulled her hair back into a ponytail 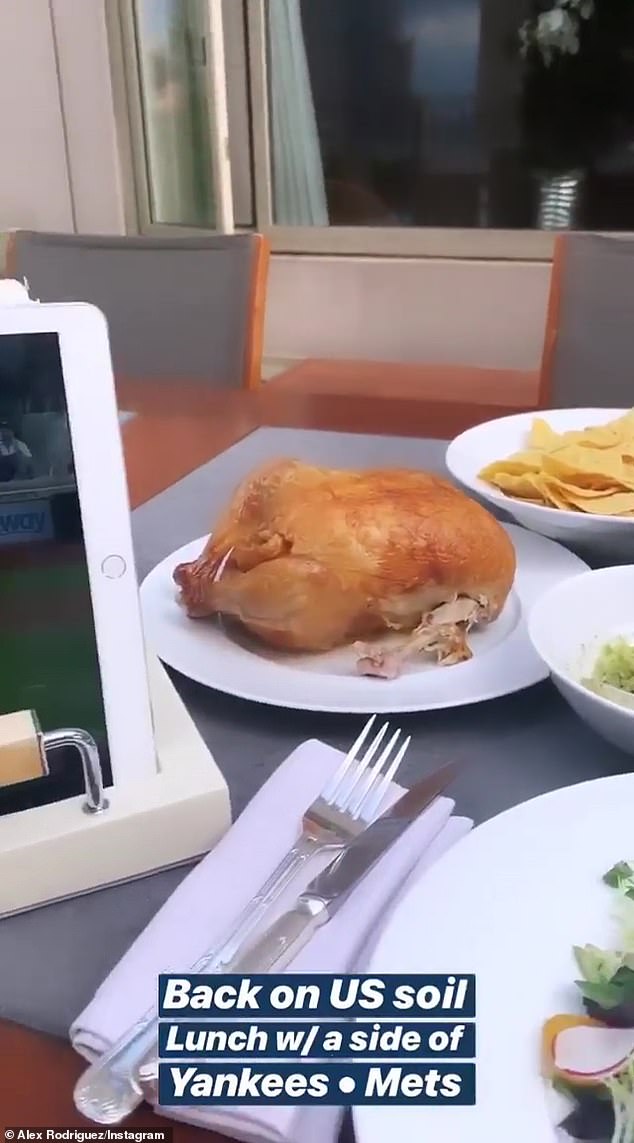 Closer look: She had a full chicken on a white plate that was next to the TV 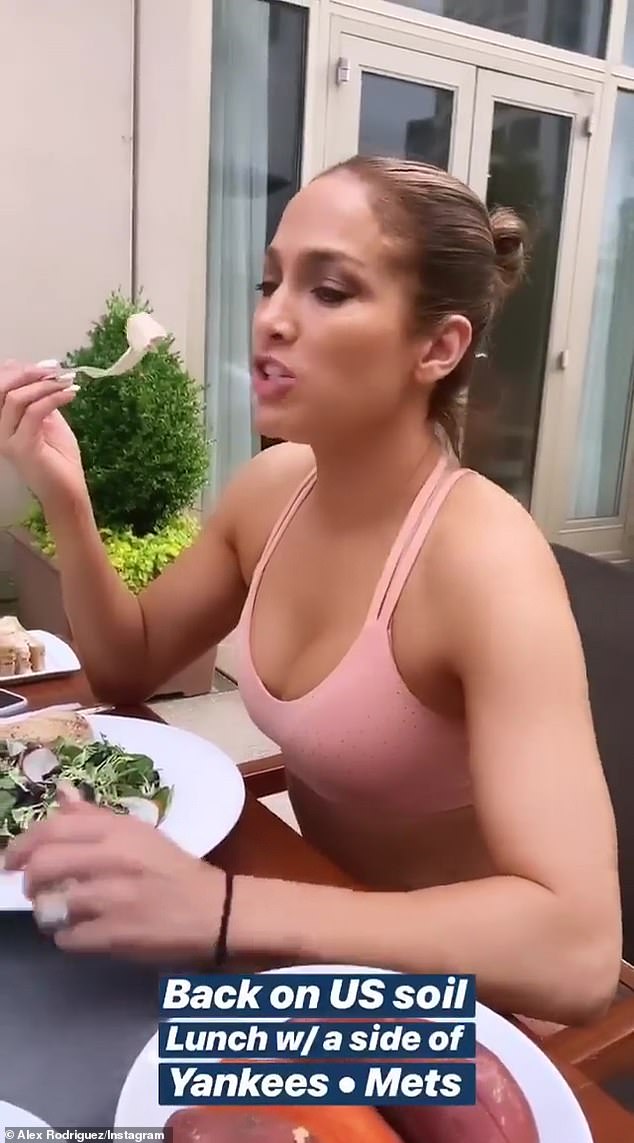 Still a cutie: Jennifer had makeup on for the outdoor meal; she looks better than stars half her age

‘Alright guys, so I just got back from the gym. It’s day ten, day ten! We did it, we’re here,’ she celebrated with her 85.7 million followers.

‘I mean, we still have the rest of the day but I’m feeling pretty good like we can finish.’

She continued; ‘Alex and I struggled through. Anyone who has stuck with us through the ten day challenge, congratulations.’ 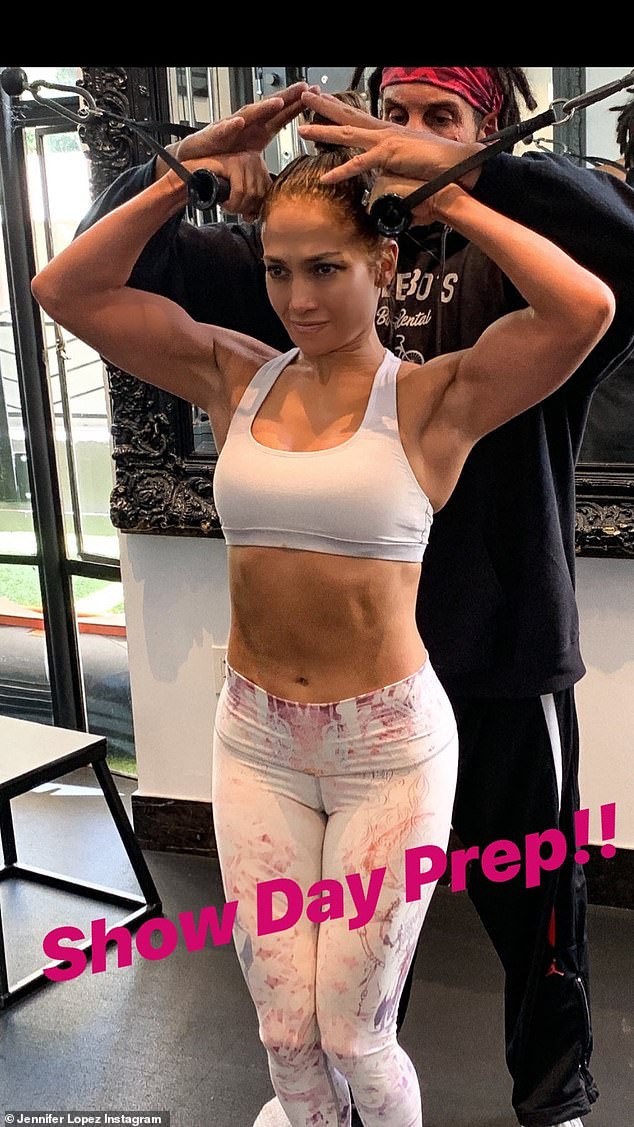 Going for it: She has been working out every day since she fell in love with Alex

And although tough, Jennifer appeared to have only had positive effects from the grueling challenge.

‘Maybe we’ll stop for a few days and then get back on it, and some of you can join me for the second round,’ she teased.

The Dance Again singer also took to her Instagram page to share a video of Today Show host Hoda Kotb challenged by Carson Daly to break the fast.

‘I’ll give $5000 to your favorite charity. J-Lo or starving kids?’ he said while flashing a sweet treat in front of her face. 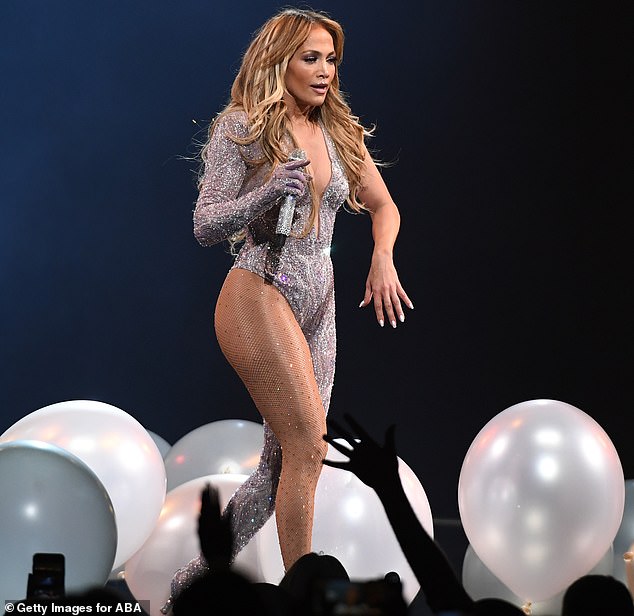 Back on stage: Jenny has been on a summer party turn before turning 50

Taking a minute to come up with a solution, the journalist replied: ‘How about this, I’m going to give $5000 to my favorite charity.’

And it appeared as though Jennifer was more than happy with Hoda’s decision, captioning: ‘When you stand for something, you make beautiful things happen. Alex and I will match your donation @carsondaly @hodakotb! A lot can happen in 10 days!’

Speaking about what had happened over on her Instagram Stories, Jennifer referred to Carson as a devil and Hoda as a savage. Her partner in crime: The cover girl is engaged to Alex; seen here in August 2018