Jennifer Garner, 50, looks youthful in nerd glasses with her wet hair pinned up as she enjoys a power walk in LA’s affluent neighborhood of Brentwood

Jennifer Garner looked youthful as she wore nerd glasses while enjoying her sunny afternoon walk in the affluent neighborhood of Brentwood, California, on Thursday.

The Yes Day star had on black workout slacks, a white T-shirt, Gucci sneakers, and a green smartwatch on her left wrist.

The 50-year-old Alias actress pulled her damp auburn hair into a bun and went make-up-free. 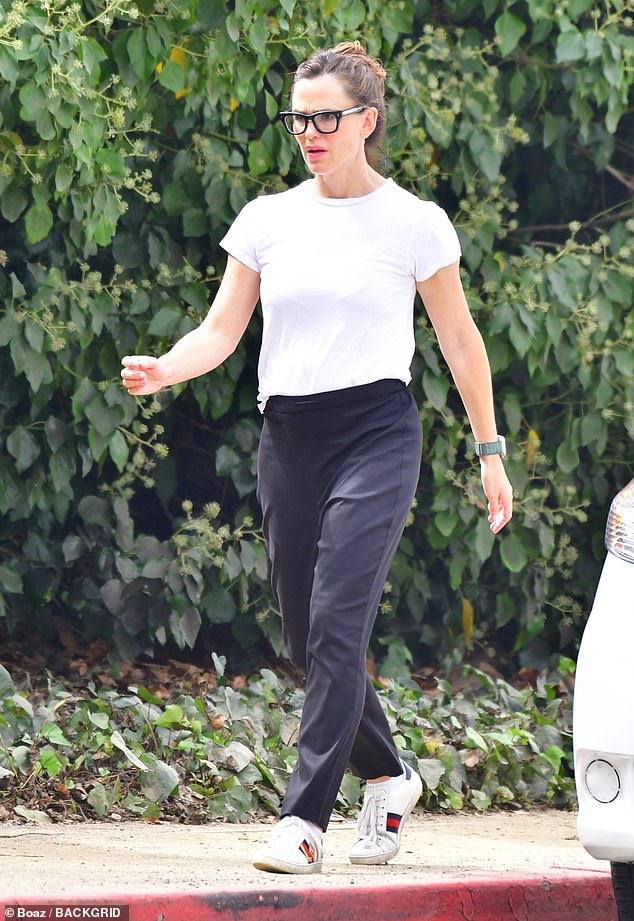 Garner and Affleck met while working on the sets of features Pearl Harbor and then Daredevil. They tied the knot in 2005; however, they announced their separation in 2015, divorced in 2018, and maintain an amicable co-parenting relationship.

On Wednesday, the Golden Globe-winning actress was spotted embracing the spirit of Halloween with Seraphina and Samuel at a pumpkin patch.

On Sunday, the busy mom was seen with Samuel at a farmer’s market in Santa Monica. 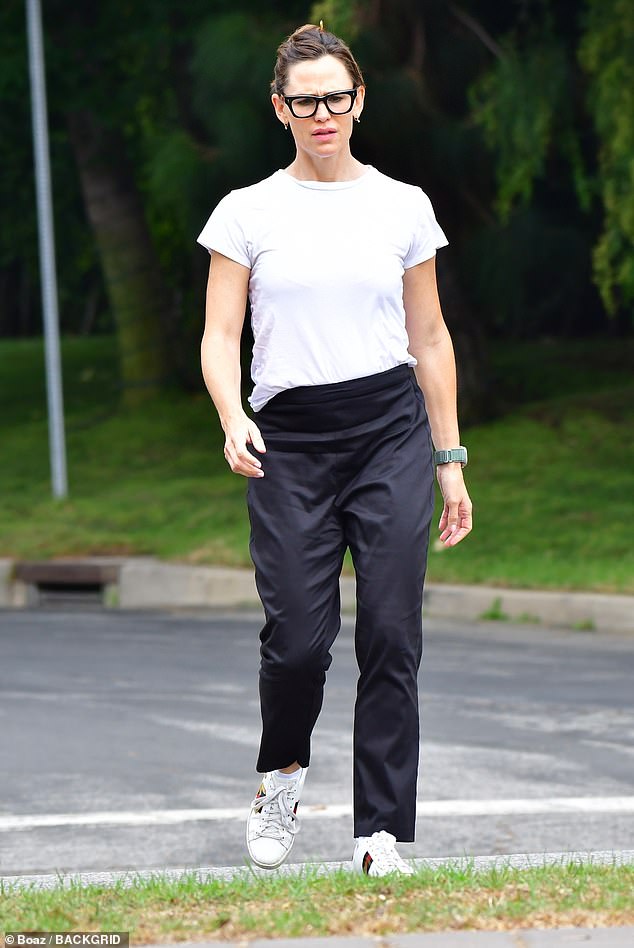 Two weeks ago in New York City at Fast Company’s 8th annual Innovation festival, the actress spoke about the success of the company she co-founded, Once Upon a Farm, saying, ‘The business has grown a lot. As a matter of fact, when we were here last time we were less than $1 million a year and now by the end of this year we’re in the $100 million dollars.’

She added, ‘Once Upon a Farm was such a total no-brainer as a working mom. I remember coming home from work, I was shooting The Kingdom, I’d had my first baby. I remember having fake blood all over and just standing at the blender crying. I was so tired making food for my baby. And this would have been a no-brainer, game-changer, day-saver.’

The baby food company was co-founded in 2017  to create food with only ‘fresh’ ingredients, including avoiding added sugars and artificial flavoring. 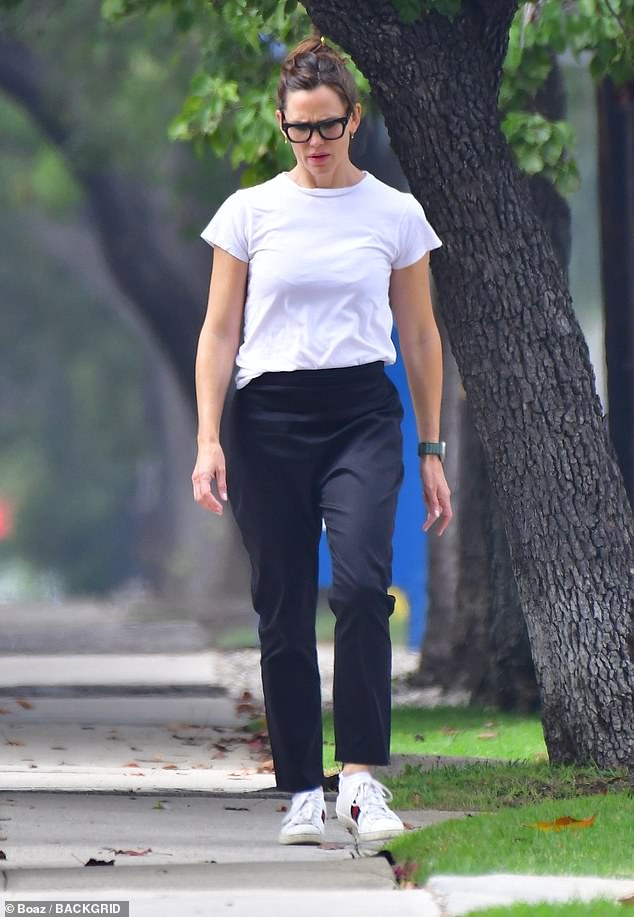 Entrepreneur: The actress co-founded a baby food company in 2017 called Once Upon a Farm to create food with only ‘fresh’ ingredients, avoiding added sugars and artificial flavoring

Now in over 11,000 retail stores in North America, and with a robust direct-to-consumer and eCommerce platform, the baby-food company is expected to double again in 2022 based on their growing product portfolio.

The brand’s website revealed that a portion of the fruits and vegetables included in the baby food is freshly grown on Jennifer’s family farm in Oklahoma.

When talking to Forbes, the entrepreneur explained, ‘We want absolutely the best for our kids. We really believe every mom makes an inherent promise the minute she has a new baby to do right by them.’ 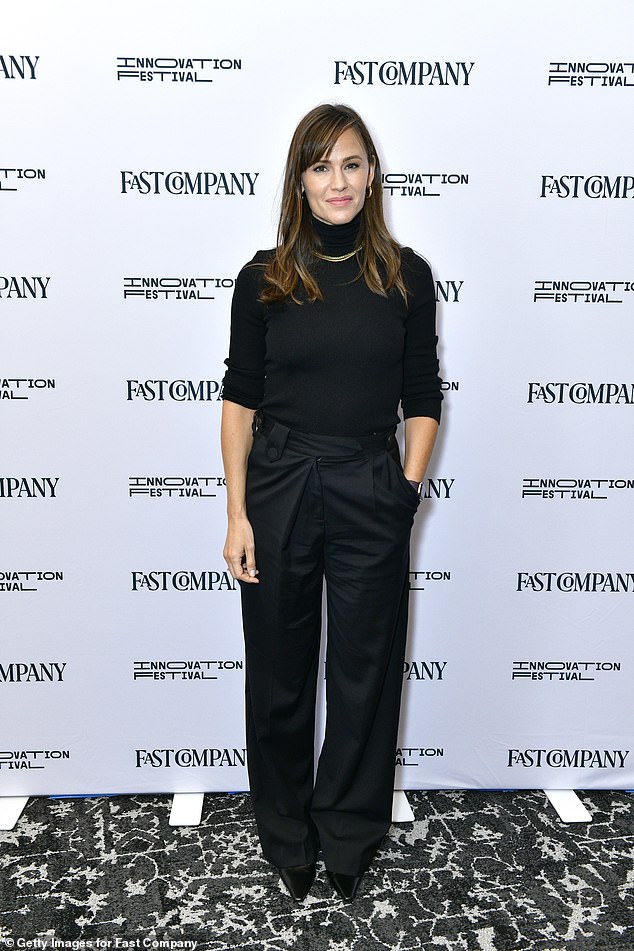 Head for biz: Two weeks ago in New York City at Fast Company’s 8th annual Innovation festival, the actress spoke about the success of the company she co-founded, Once Upon a Farm, saying, ‘The business has grown a lot