Fabulous at 52! Ally McBeal vet Jane Krakowski looks stunning in a plunging swimsuit as she makes a rare sighting with beau David Rockwell, 65

Jane Krakowski put her fabulous figure on show while relaxing at the beach over the weekend.

The 52-year-old Ally McBeal veteran showed off her sculpted arms and toned legs while in a deep blue one-piece bathing suit that also had a plunging front.

The blonde beauty – who is also known for her TV shows 30 Rock and Unbreakable Kimmy Schmidt – had her hair pinned up as she walked on the shore in the Hamptons with her boyfriend of two years, David Rockwell, 65.

Dazzling dame: Jane Krakowski looked incredible in a plunging blue swimsuit while relaxing at the beach in the Hamptons over the weekend 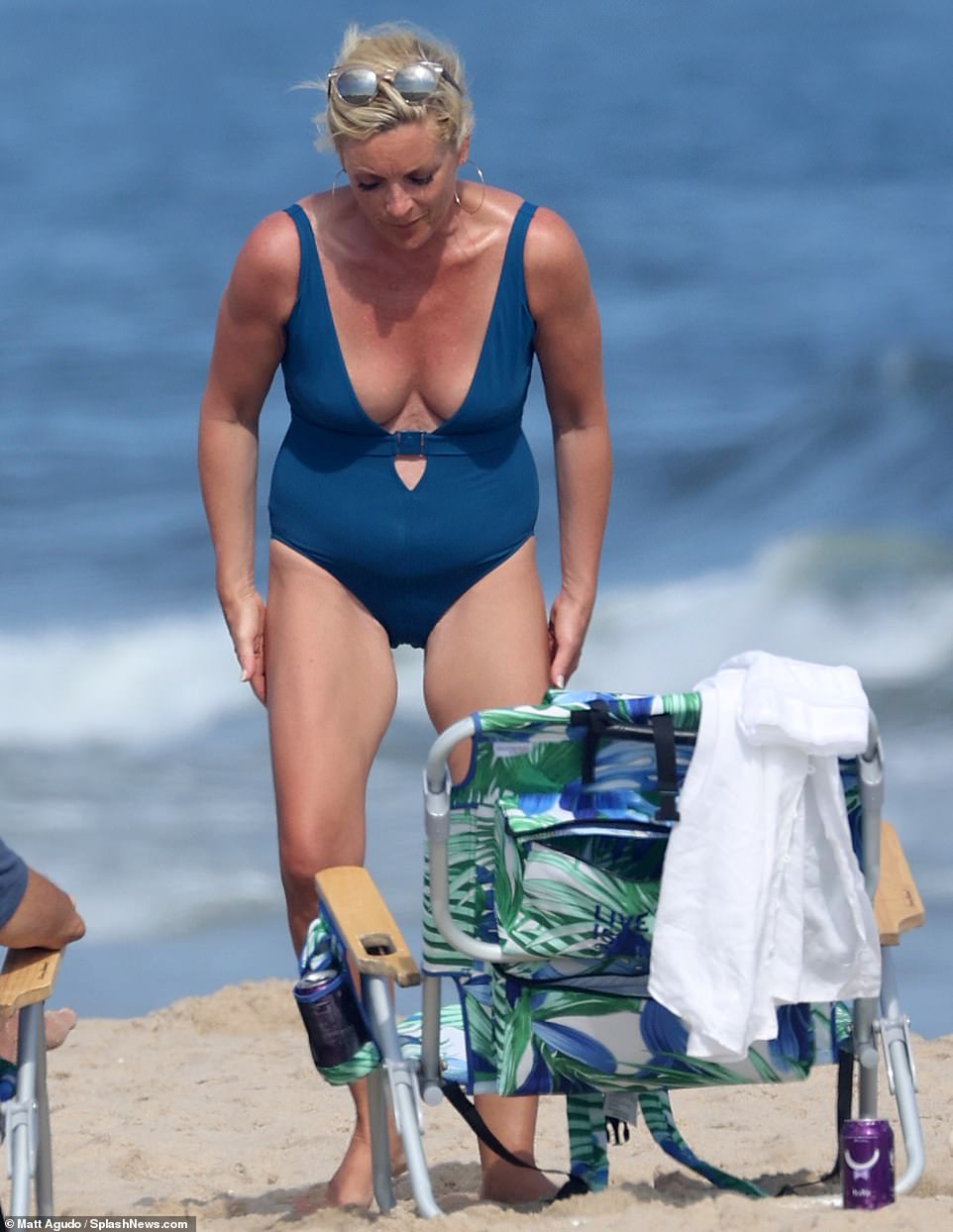 Still a pinup: The 52-year-old Ally McBeal veteran showed off her sculpted arms and toned legs while in a deep blue one-piece bathing suit that also had a plunging front 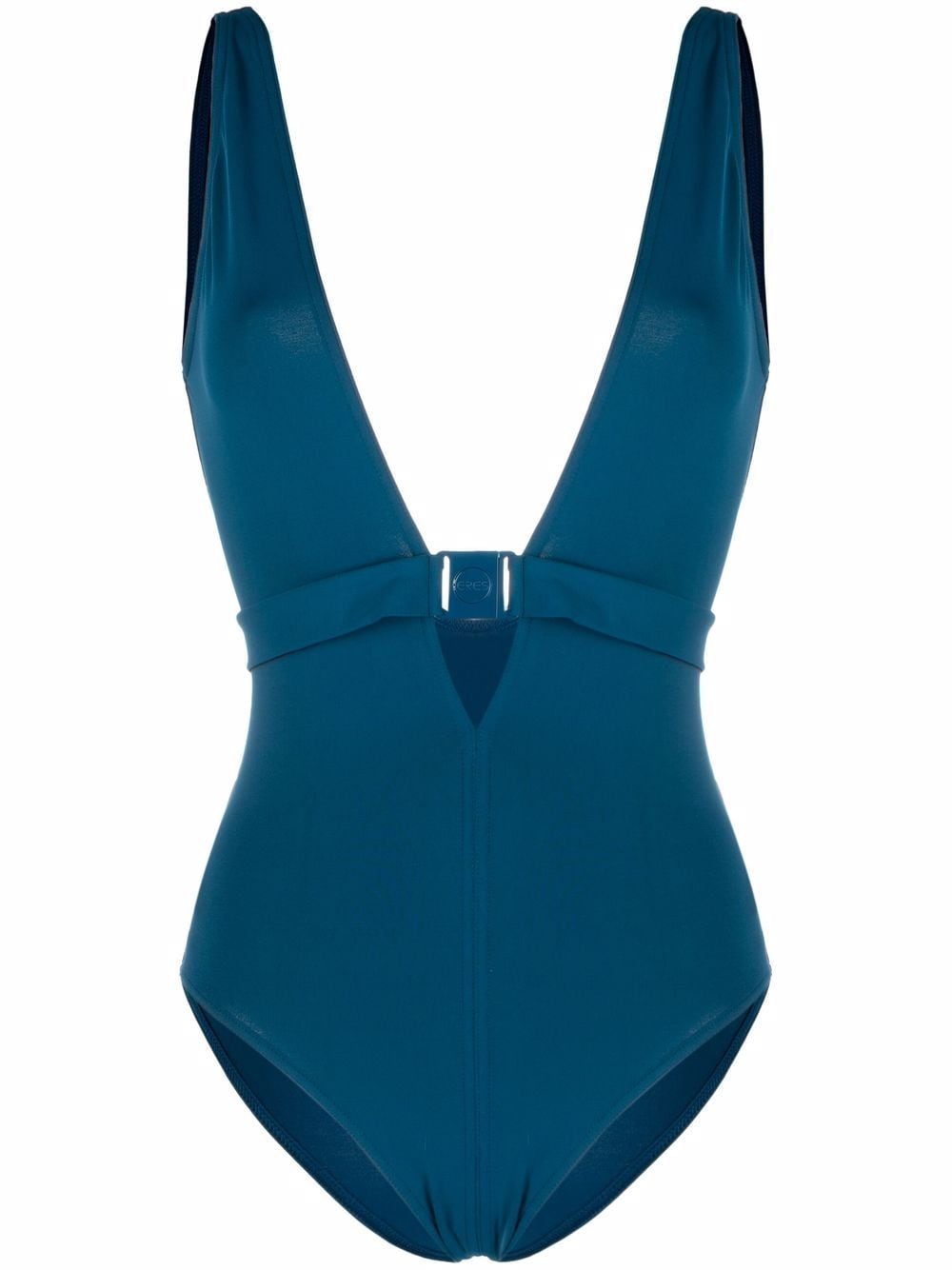 The lovebirds were spotted side by side on as she wore large hoop earrings and mirrored sunglasses.

They were also seen carrying matching beach-chair backpacks as they make their way along the sand.

Rockwell is an American architect and designer who was born in Illinois and studied at Syracuse University, and the Architectural Association.

The New Yorker is the founder and president of Rockwell Group, a 250-person cross-disciplinary architecture and design practice based in New York City. He also has offices in Madrid and Los Angeles.

He used to be married to Marcia Kirkley, 60, a producer and production manager, known for Wrestling with Alligators (1998). They have two children together, Sam and Lola.

She keeps an eye on business: The leggy lady looked at her cell phone before picking up a white blouse 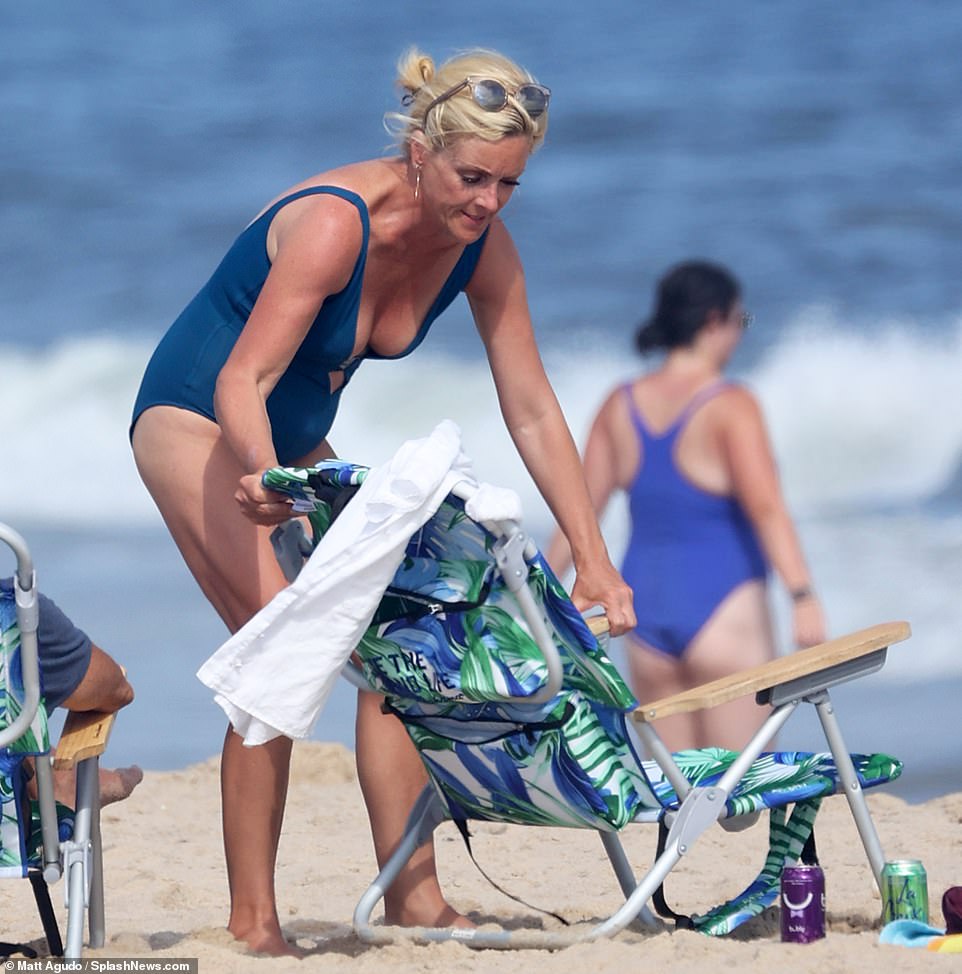 Time to say goodbye: Jane packed up her tropical print folding beach chair that had a LaCroix soda can on the side 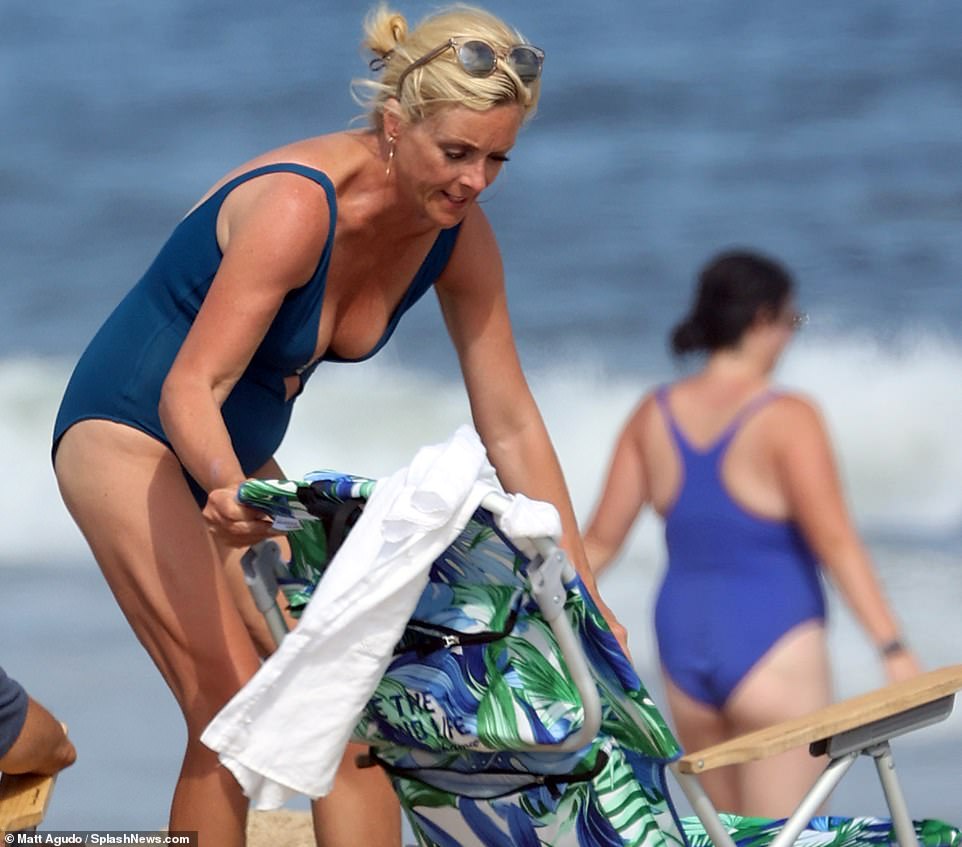 She never looks bad! The screen and stage veteran had on flattering makeup as her blonde hair framed her face

David has also worked on film and TV sets.

New Jersey native Jane has never been married but was with fiancé Robert Godley from 2009 until 2013. Together they have son Bennett Robert Godley, aged 10.

Krakowski is also known for her decades of stage and screen work that has won her many awards.

She got her start as Theresa Rebecca Kendall in the NBC soap opera Search for Tomorrow. She was nominated for two consecutive Daytime Emmy Awards for her role in 1986 and 1987. 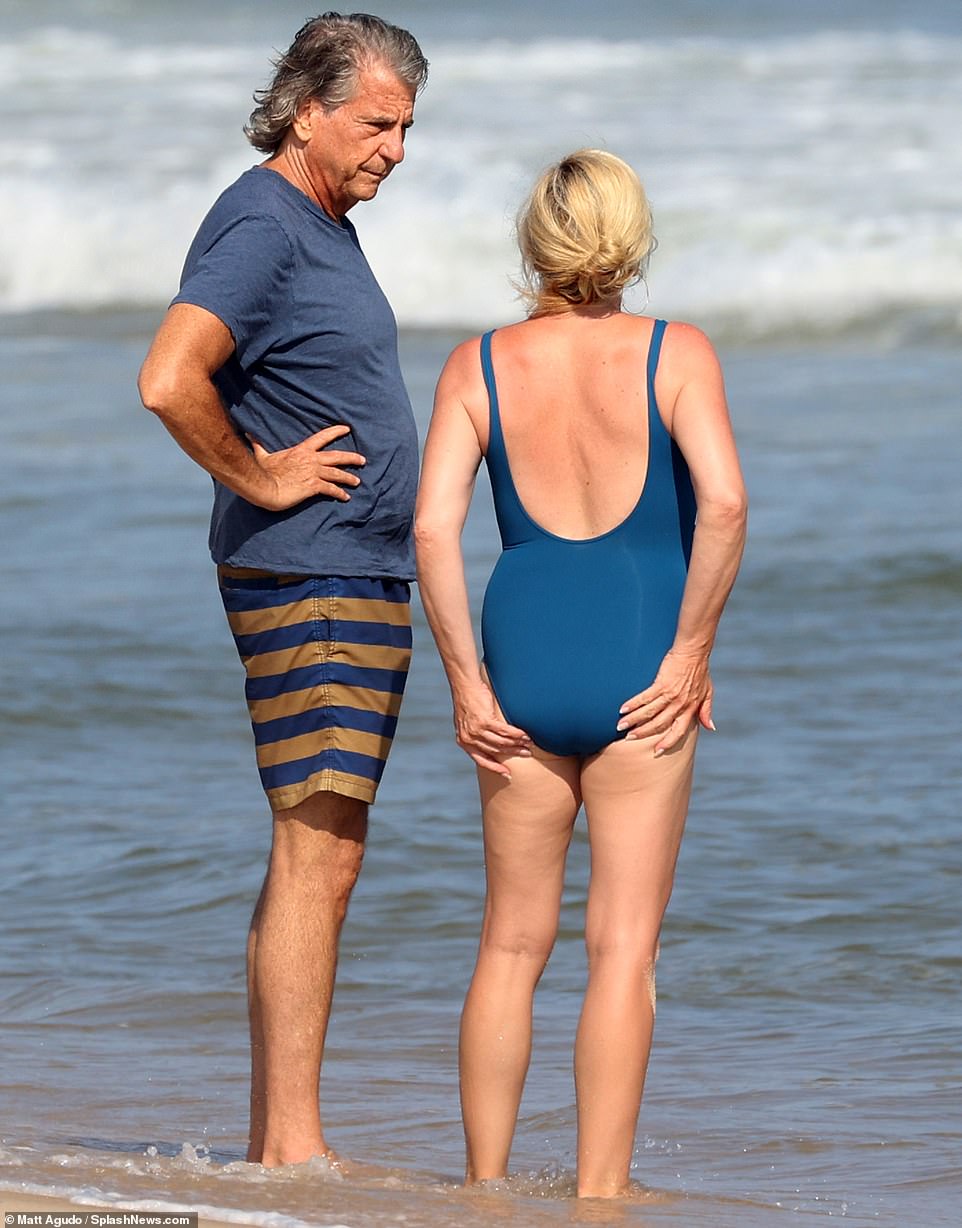 Her love: The blonde beauty – who is also known for her TV shows 30 Rock and Unbreakable Kimmy Schmidt – had her hair pinned up as she walked on the shore with her boyfriend of two years, David Rockwell, 65 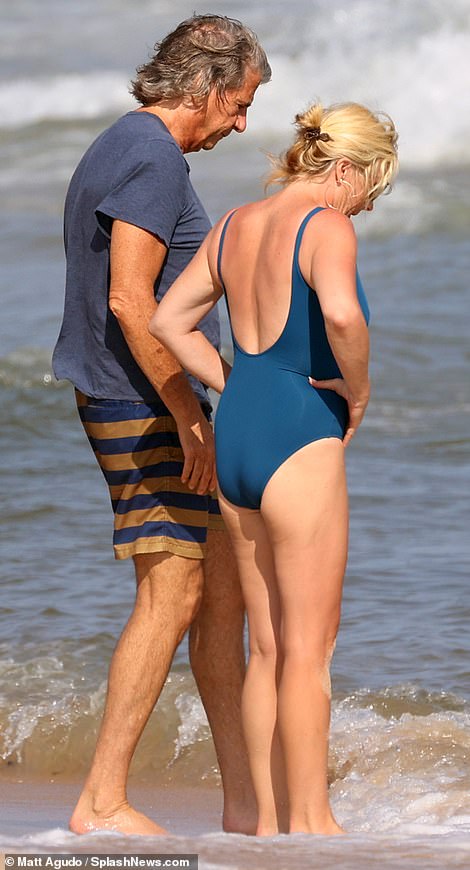 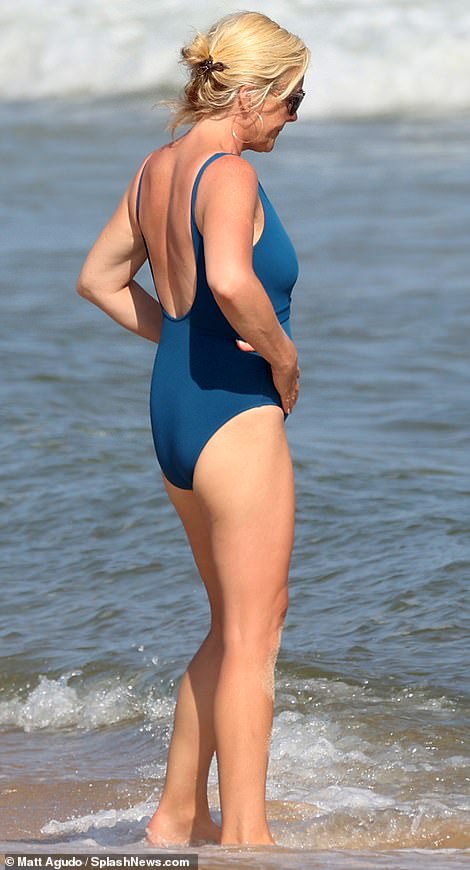 So close: The lovebirds were spotted side by side on the beach

Next came her role as office assistant Elaine Vassal in the Fox comedy-drama series Ally McBeal that starred Calista Flockhart.

Krakowski was cast in the NBC comedy series 30 Rock, where she played Jenna Maroney, a cast member of the fictional late night sketch comedy show TGS.

In 2015, Krakowski was cast in the Netflix comedy series Unbreakable Kimmy Schmidt as Jacqueline White.

She has since guest starred in an episode of Due South, and in multiple episodes of Modern Family.

Krakowski joined former American Idol judge Randy Jackson for Name That Tune in January. She said, ‘One of the reasons I wanted to do Name That Tune was to perform again in front of a live audience.’ She also has a supporting role in the upcoming Apple TV+ musical comedy series Schmigadoon! starring Cecily Strong. 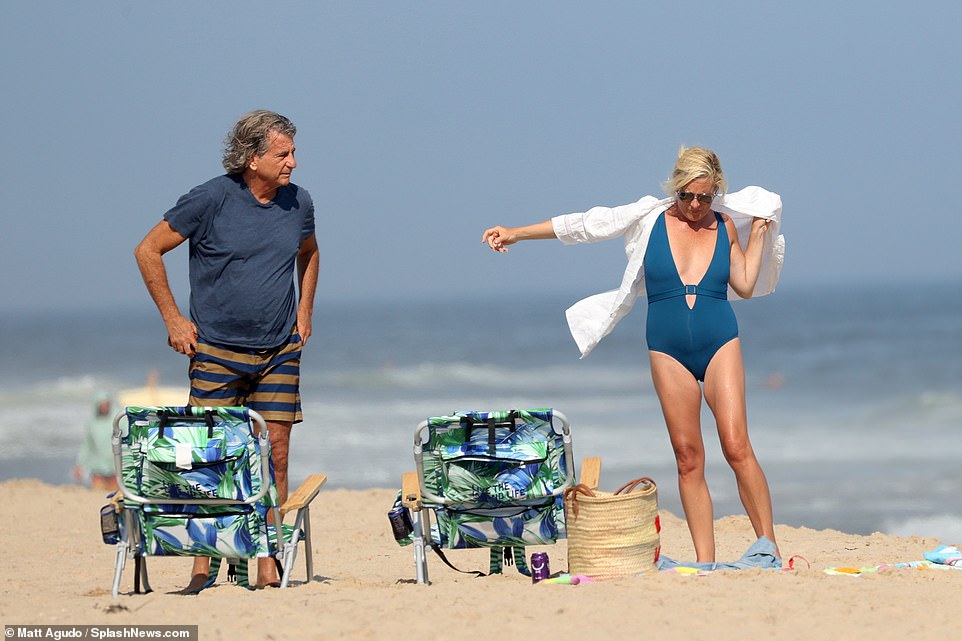 She had enough sun: After working on her deep summer tan, Jane slipped on her long-sleeved white blouse 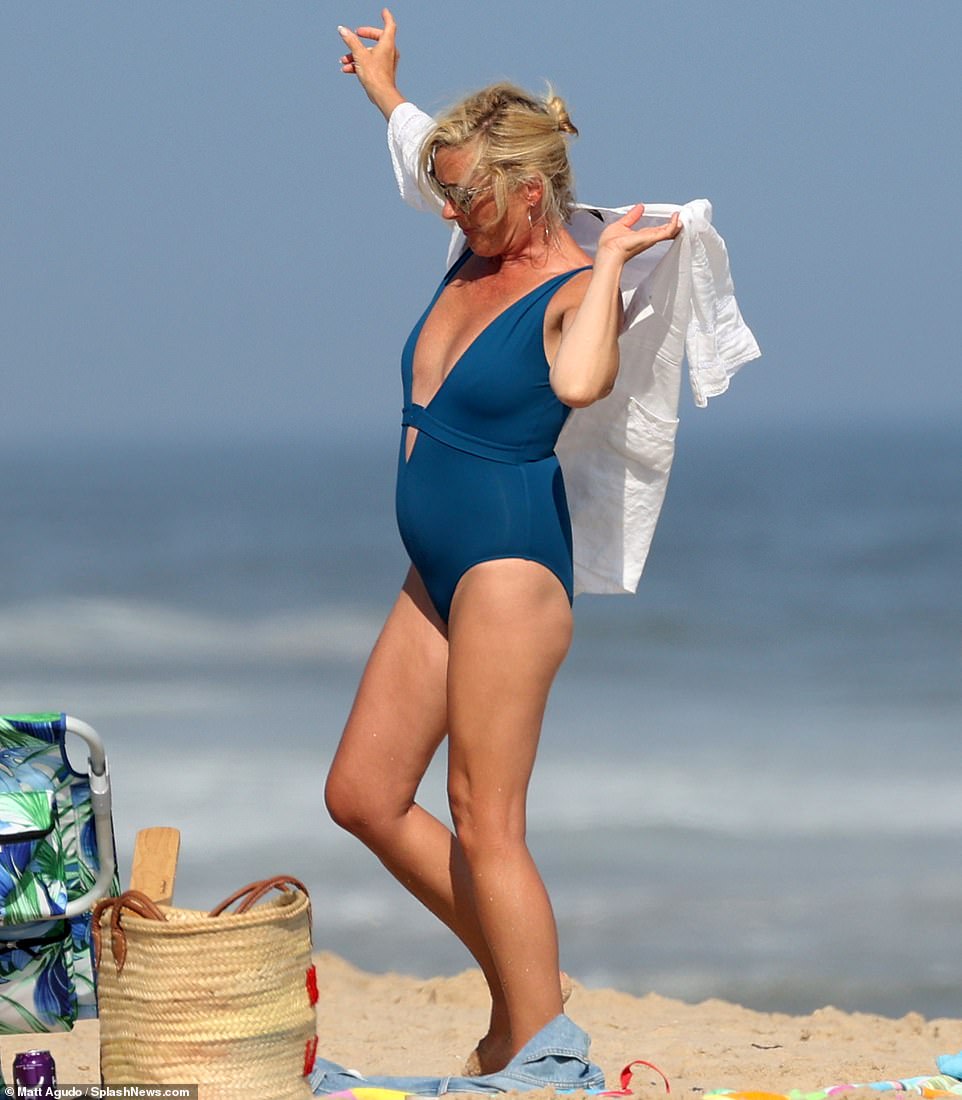 No more sun thank you: She seemed to burn on her chest a but as she made her way into her cover up 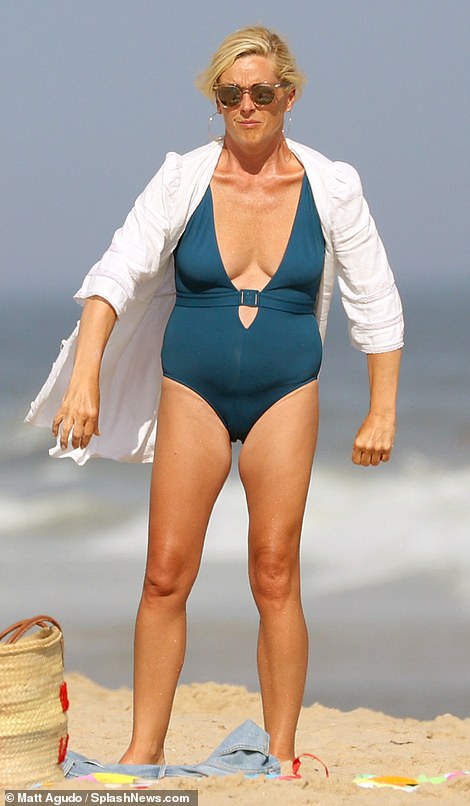 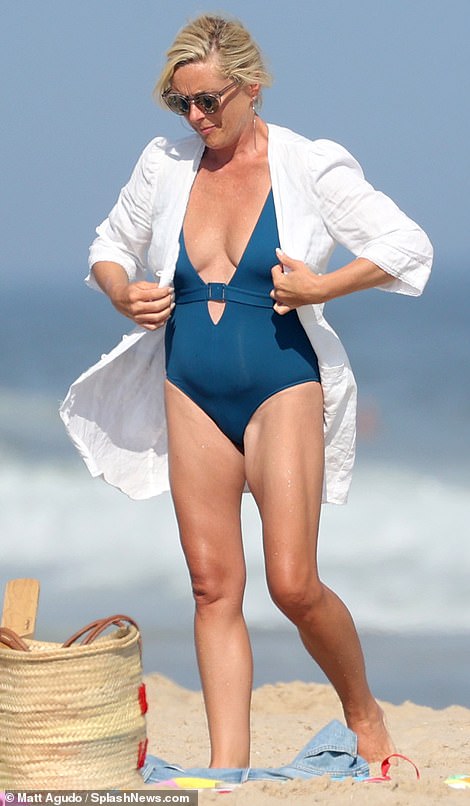 And whole new look: Once her blouse was on she looked around as she prepared to gather up her towel and woven bag

A trained singer, Krakowski has made numerous appearances on stage in Starlight Express, Grand Hotel, Company, Once Upon a Mattress, Guys And Dolls, Xanadu, Damn Yankees and She Loves Me.

In March TV Line reported that a revival of Ally McBeal is currently in the works, with titular star Calista eyed to return.

The fantastical comedy-drama followed an over-imaginative attorney as she navigated the ups and downs of both her personal and professional life. 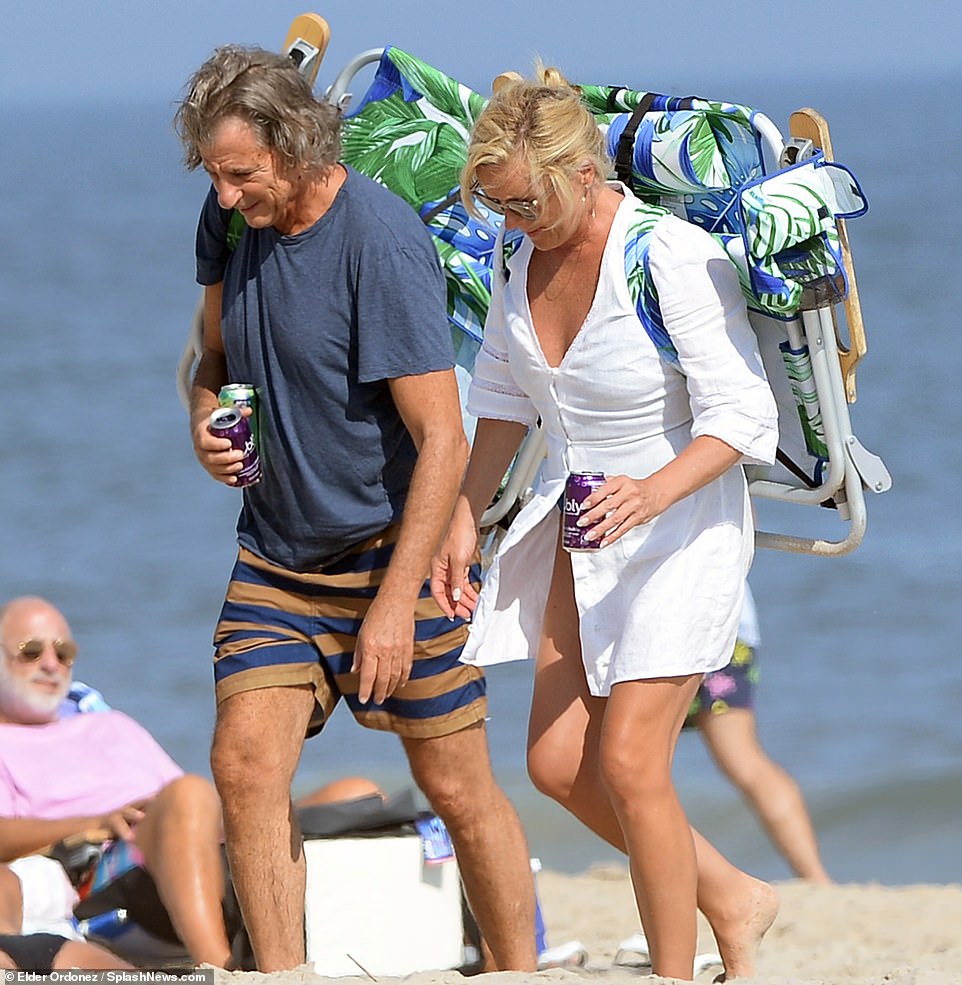 They certainly seem in step: The architect and the actress walked side by side with matching folding chairs on their backs 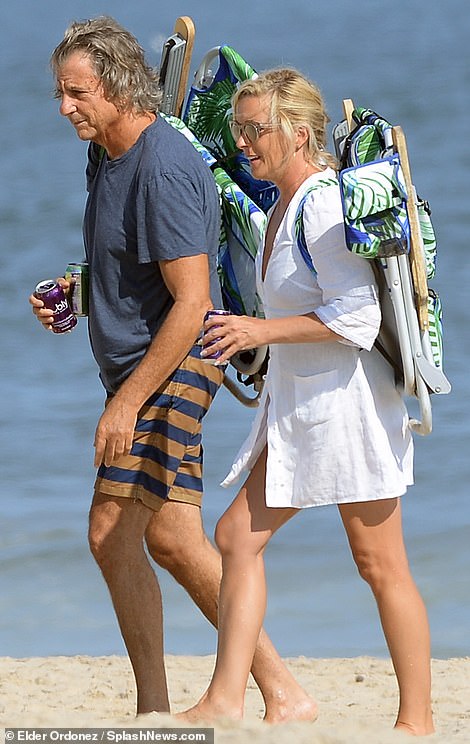 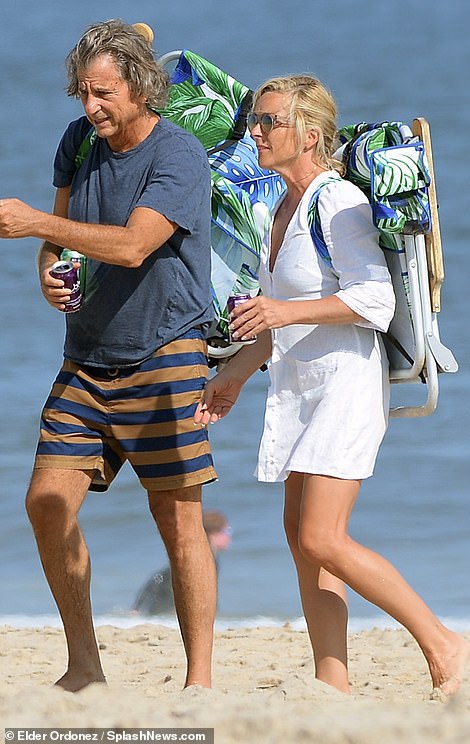 A little chat as they walked off the shore: They talked as they made their way back to their car as both held soda cans

The show ran for five seasons until 2002, and costarred Vonda Shepard, Portia de Rossi, Lucy Liu, Courtney Thorne Smith and Gill Bellows, among many others.

Show creator David E Kelley has previously mentioned his support of a reboot of McBeal, however he has urged that a woman be the main creative force behind the new iteration.

‘I’d be open to the idea of Ally McBeal being done again, but I don’t think it should be done by me. If it were going to be done, it really should be done by a woman,’ the husband of Michelle Pfeiffer told The Hollywood Reporter back in 2018. 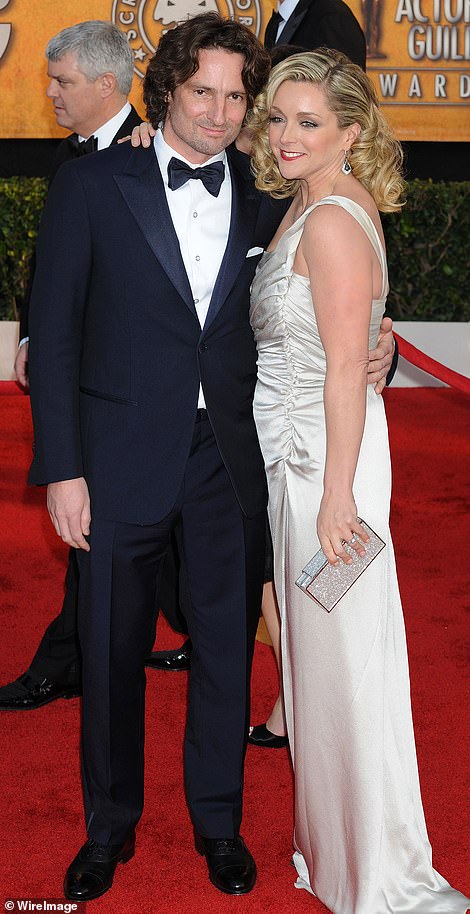 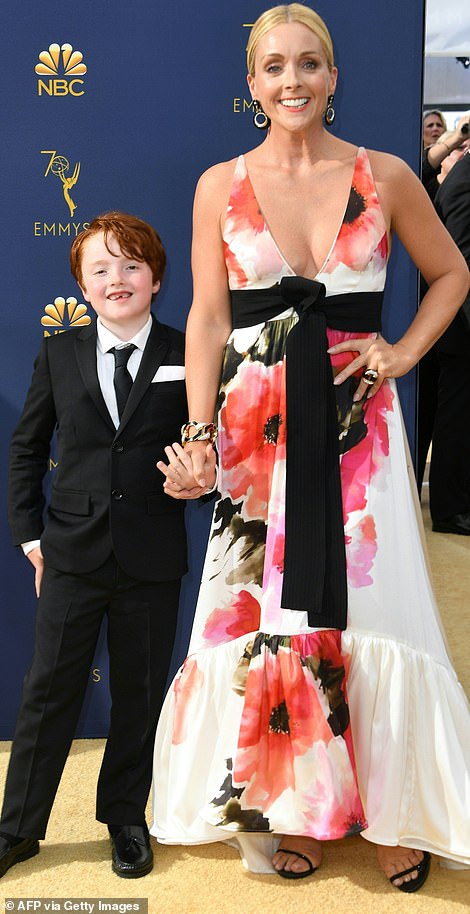 Her past: New Jersey native Jane has never been married but was with fiancé Robert Godley from 2009 until 2013. Together they have son Bennett Robert Godley, aged 10

‘If it’s going to be new, it should be new and different. And I did it: 100 hours,’ he concluded.  Kelley would, however, remain on board as an executive producer.

It is not yet clear whether Flockhart, who is married to Harrison Ford, is already in official negotiations to reprise her starring role.

The same holds true for costars Krakowski, Liu, de Rossi, Thorne Smith and the others.

Over its five-year run, Ally McBeal won four Golden Globes as well as seven Primetime Emmys, including for Outstanding Comedy Series.  While McBeal originally ran on Fox, no current network or streaming platform is yet attached to the reboot. 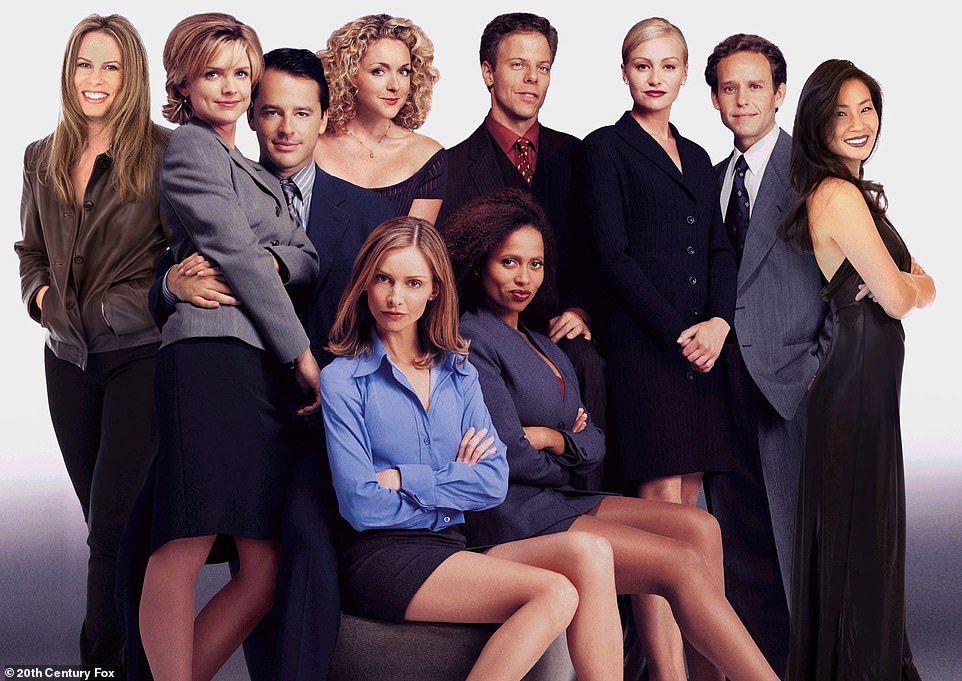