A big part of what makes The Haunting of Bly Manor so unsettling is the sheer gorgeousness the English countryside setting. The manor’s austere grandeur and the lush, natural beauty surrounding it can quickly lull viewers into a sense of security, only for that serenity to be suddenly upended by a ghostly appearance. The beautiful setting of the new season may have fans wondering if Bly is a real place in England. Here’s what curious viewers should know:

Although the quaint town of Bly seems plucked right out of someone’s ideal vision of the English countryside, it’s actually not a real place. The new Haunting season is inspired by Henry James’ 1898 novella The Turn of the Screw, which is set in a made-up country house called Bly. James’ story states that Bly is located in the English county of Essex, but in reality, there is nowhere called Bly in Essex. There is a village called Blyborough in England, but it’s in Lincolnshire county.

So where did the name Bly come from? There’s belief that James chose the name for a reason, and The Haunting of Bly Manor really plays that up: Bly is a notable surname that originated in England during times of the feudal system. It is derived from the Old English term for a gentle or merry person, which totally fits in with the genial, welcoming vibe of Bly Manor… before the haunting begins, of course. The meaning also resonates with Flora’s favorite phrase: perfectly splendid. 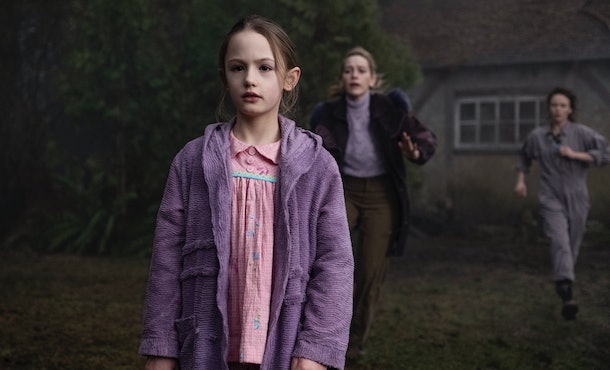 Although The Haunting of Bly Manor predominantly takes place in England, the series was actually filmed across the pond. The follow-up to The Haunting of Hill House began production toward the end of 2019 in Vancouver, Canada. Production wrapped in early 2020 just before the coronavirus pandemic shut down filming for all TV shows and movies, which is why the season was able to keep its Oct. 9, 2020, premiere date while others had to be postponed.

While Bly Manor may not be real, the drama, scares, and all the surprisingly feel-good moments in the new Haunting story are very real for viewers. TBH, it’s probably a good thing Bly Manor isn’t a real place, because nobody would want to get close to it after watching this show.

The Haunting of Bly Manor is on Netflix now.