‘You wanna build a snowman?’: Holly Willoughby and Laura Whitmore look radiant as they lark around in the snow while leading the stars making the most of Britain’s blizzard

Much of the UK has been enjoying a welcome distraction from the usual lockdown routine after waking up to snow on Sunday.

And Holly Willoughby, 39, certainly appeared to be enjoying the winter weather as she shared a fresh-faced selfie to Instagram showing a light dusting of snowflakes in her blonde locks.

Pregnant Laura Whitmore also revealed her excitement at the white stuff falling as she donned a warm jacket and beamed a grin while outside in London.

Let it snow! Holly Willoughby, 39, shared a glimpse of her weekend as she posted a fresh-faced selfie in the snow on Instagram on Sunday

Holly looked radiant as she appeared to go make-up free, with her signature blonde locks falling loose over her face in the stunning selfie.

The TV host, who will be presenting Dancing On Ice on Sunday evening, wore a brown knit jumper and black coat to ensure she stayed warm in the snow, which was adorned with snowflakes.

Holly posted the picture to Instagram with the caption: ‘You wanna build a snowman’ with a snowman emoji.

While Laura also took to social media to share her own snow snaps, with the mum-to-be putting on an animated display as she soaked up the unexpected treat. 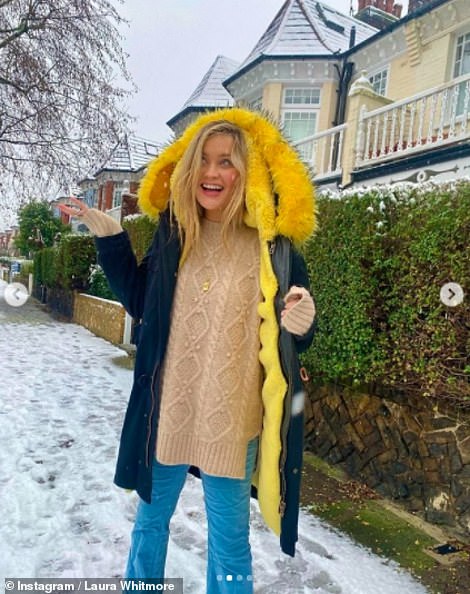 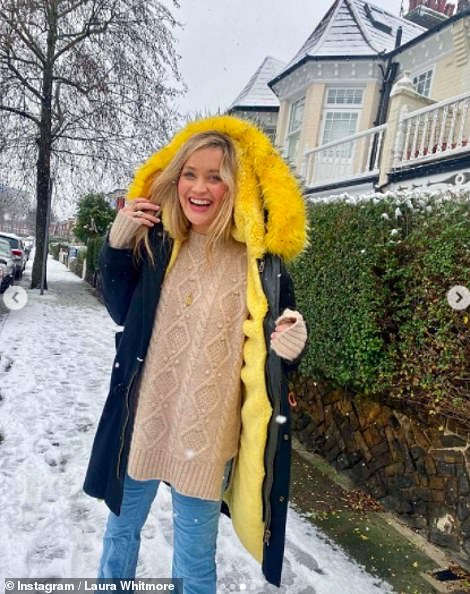 Snow day! Laura Whitmore also appeared to be in great spirits as she stepped outside to make the most of the seasonal weather 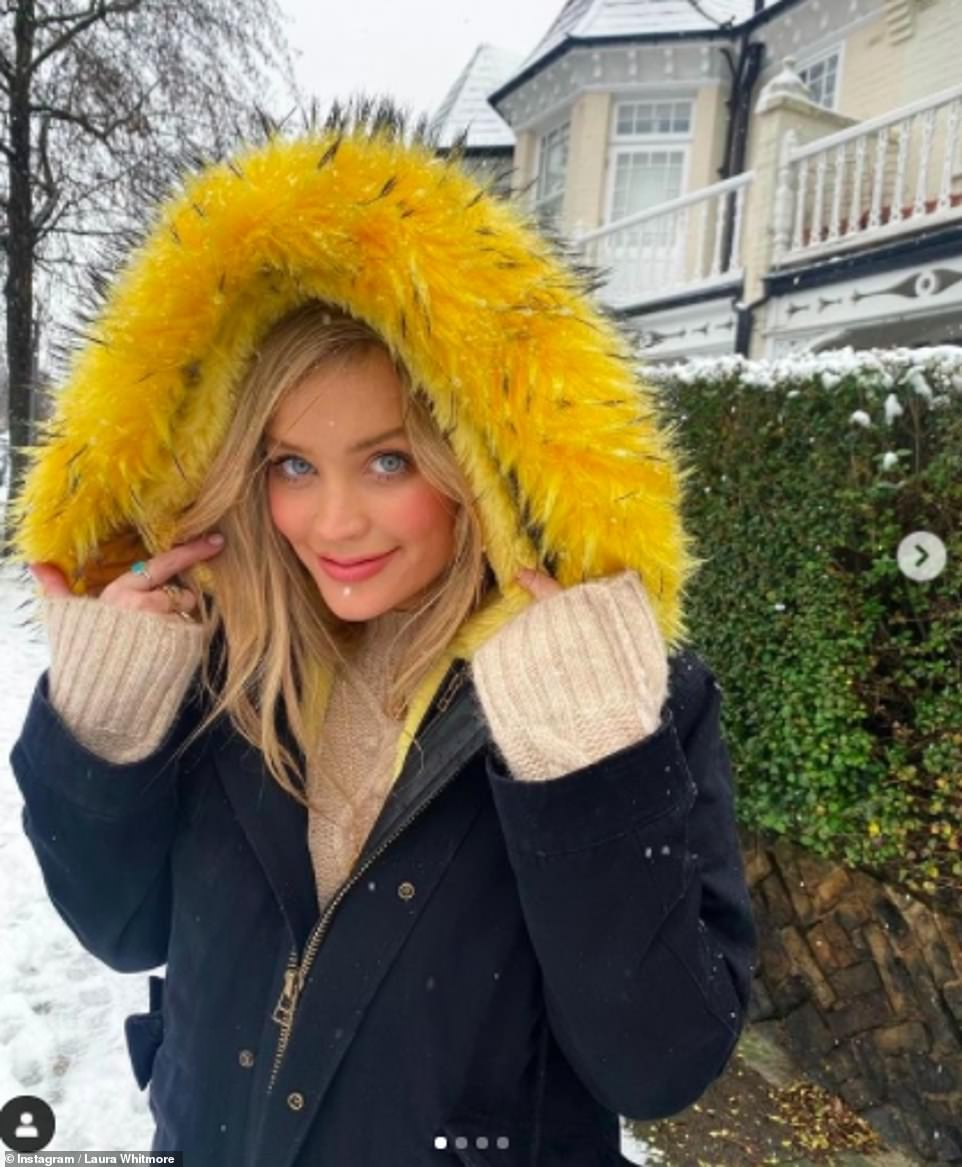 Glowing: The mum-to-be looked sensational as she posed for a few snaps in a black jacket with a bright yellow hood

Laura appeared to be in great spirits as she held out her hands to catch snowflakes and beamed a grin as she posed for a few pictures in winter wonderland.

She wrapped up warm for the trip outside in a black jacket with a bright yellow hood as well as a warm beige jumper and comfortable blue jeans.

Other celebs seen enjoying the snow on Sunday included new mum Kate Ferdinand, who shared snaps of her beloved dogs in the flurry, and Amanda Holden.

Amanda revealed she’d made a tiny snowman in her back garden, adding a funky pink and blonde wig for hair and even a face mask. 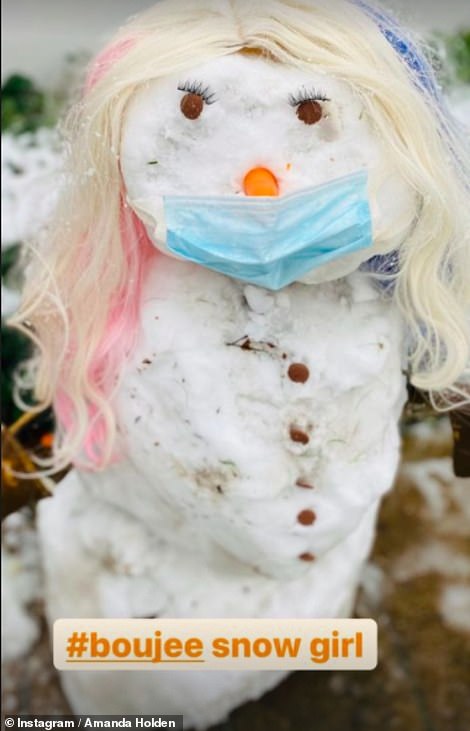 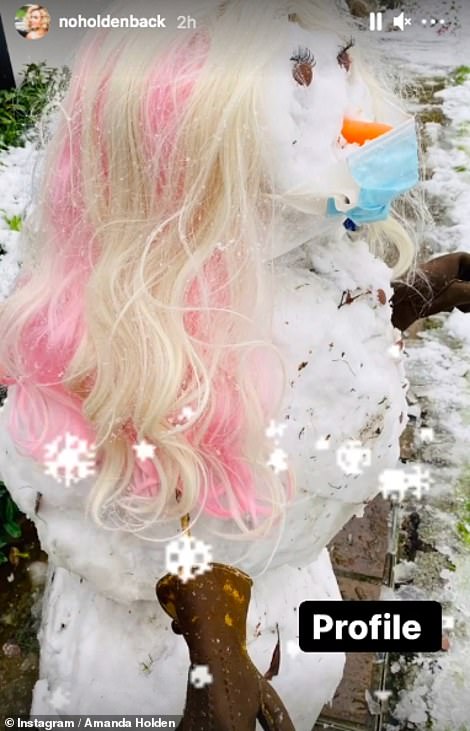 Appropriate: Amanda Holden added a face mask to her snowman, as well as a funky pink and blonde  wig 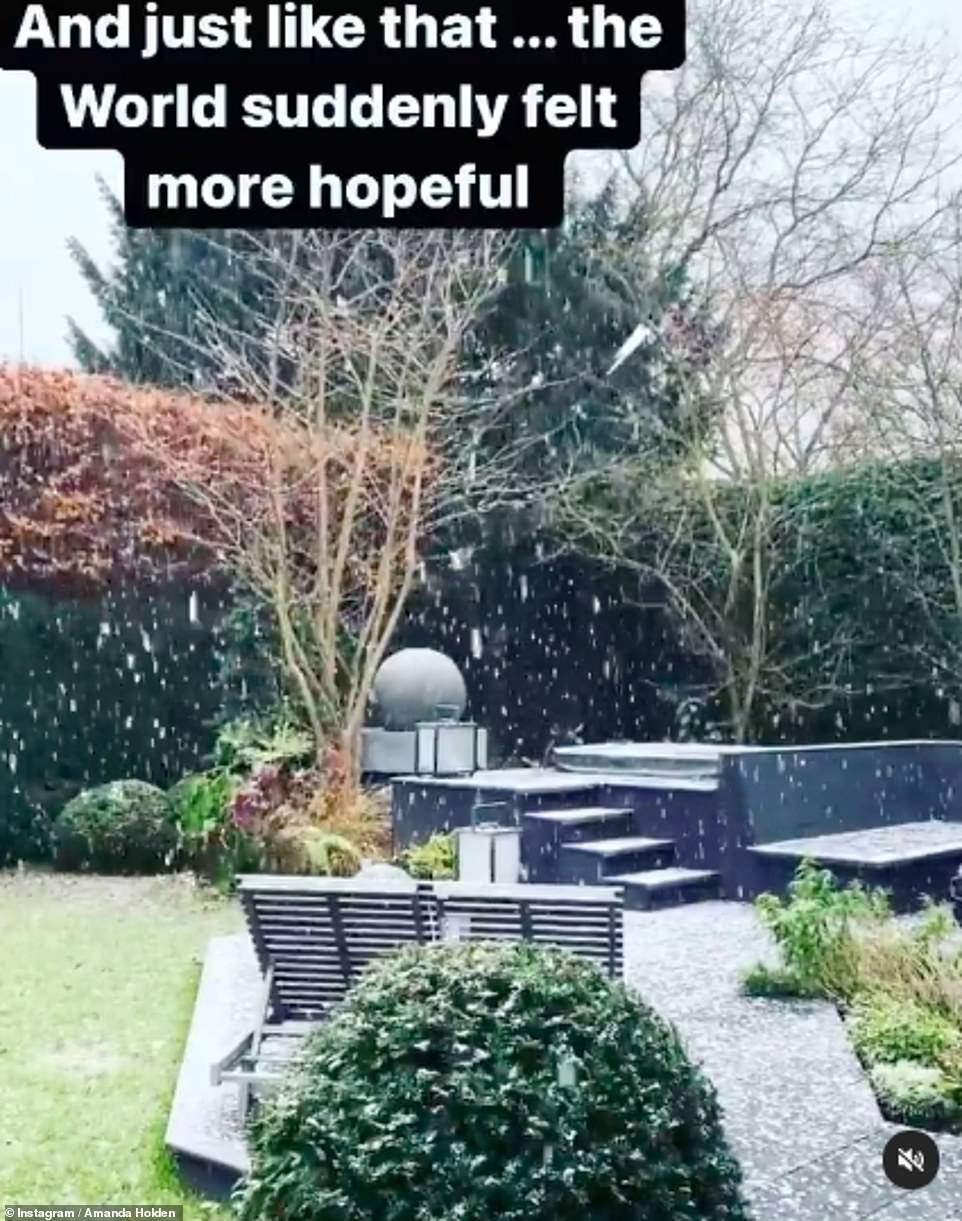 Pretty: Amanda’s back garden was covered with a light dusting of snow on Sunday morning 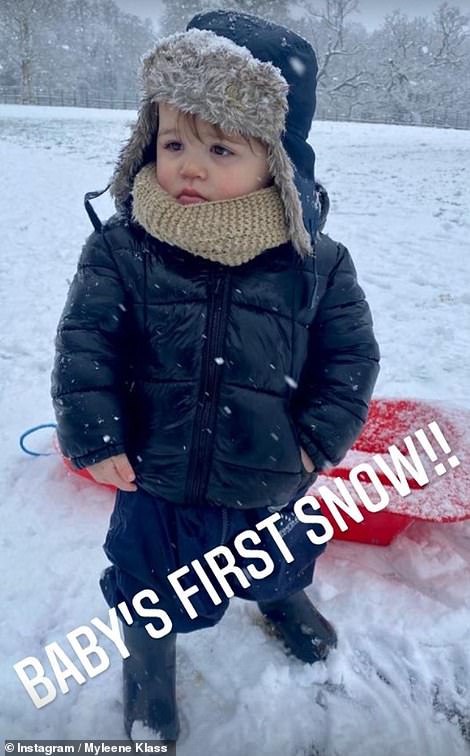 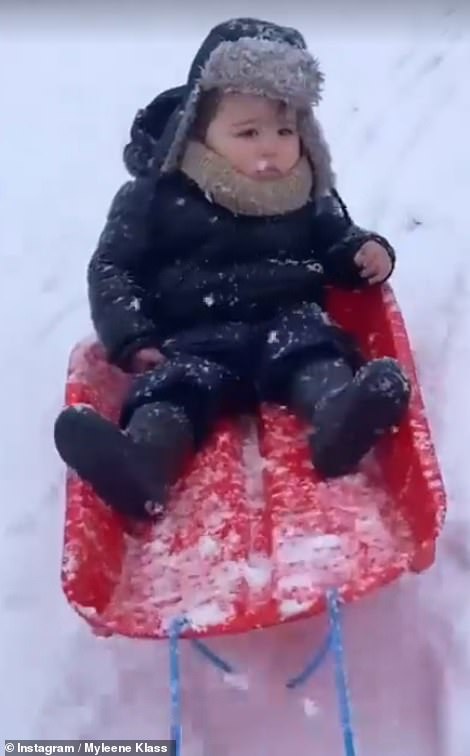 Baby’s first snow! Myleene Klass took her son Apollo out for playtime in the snow, letting the tot ride a red sledge on his first ever snow day

Abbey Clancy also made the most of the snow day, taking her brood outside to make some memories in the snow and enjoy the fresh air.

The family were all dressed in their winter warmers with dad Peter Crouch leading the excitement as he threw out his arms for a snap with his four children.

Binky Felstead also opted for a winter walk with daughter India and beau Max Darnton, with the pregnant reality star telling her followers that this ‘lockdown Sunday’ has been ‘quite fun with a surprise snow day’. 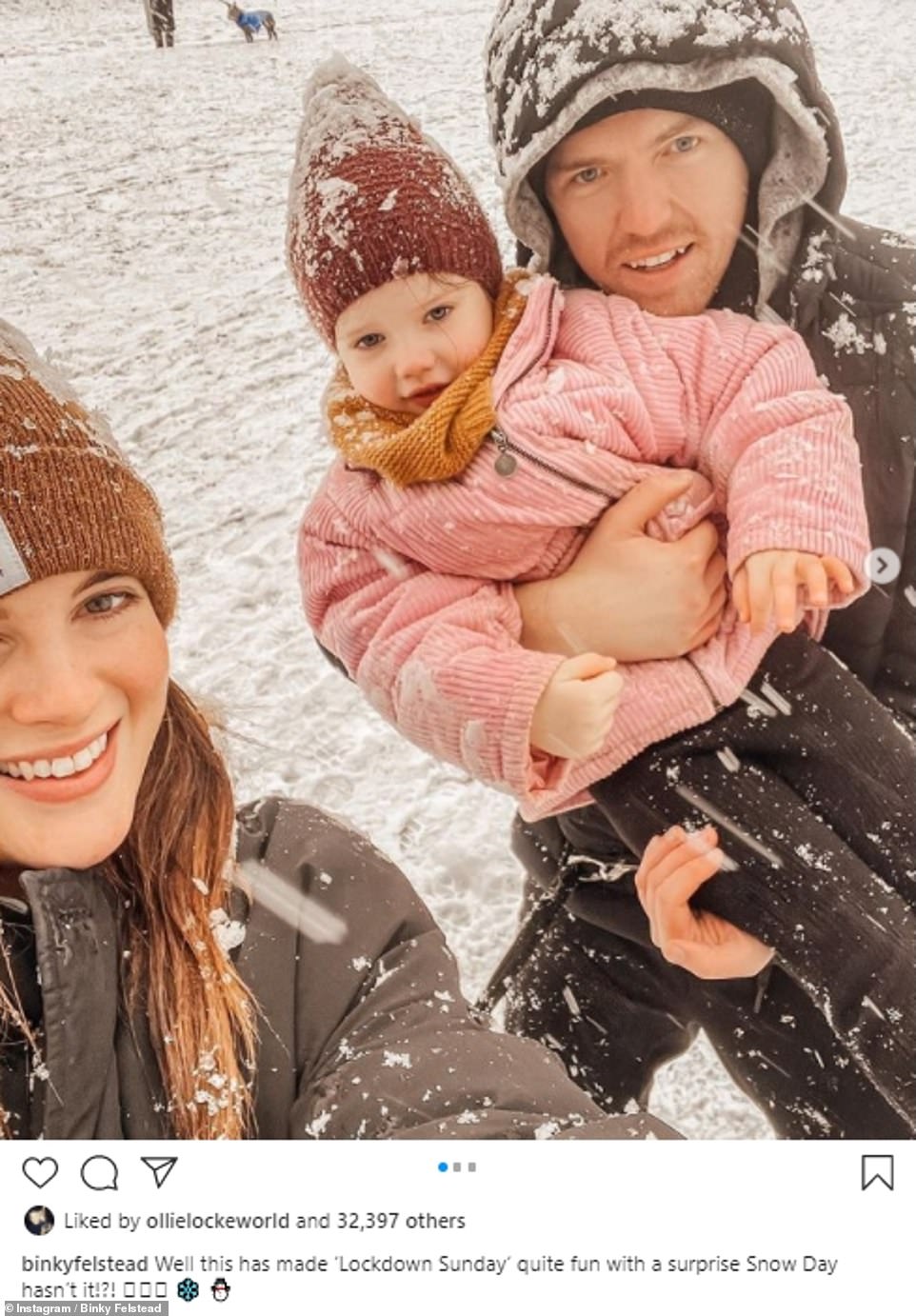 Change to routine: Binky Felstead appeared to be having a great time as she took daughter India out for some time in the snow and admitted that this ‘lockdown Sunday’ has been ‘quite fun with a surprise snow day’ 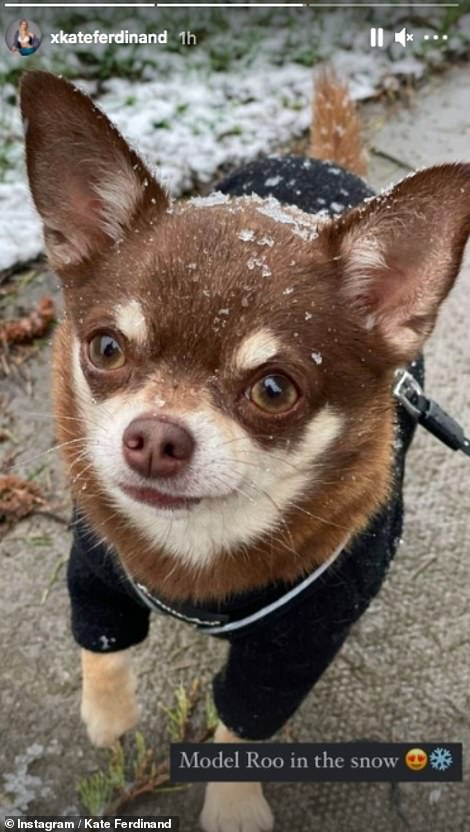 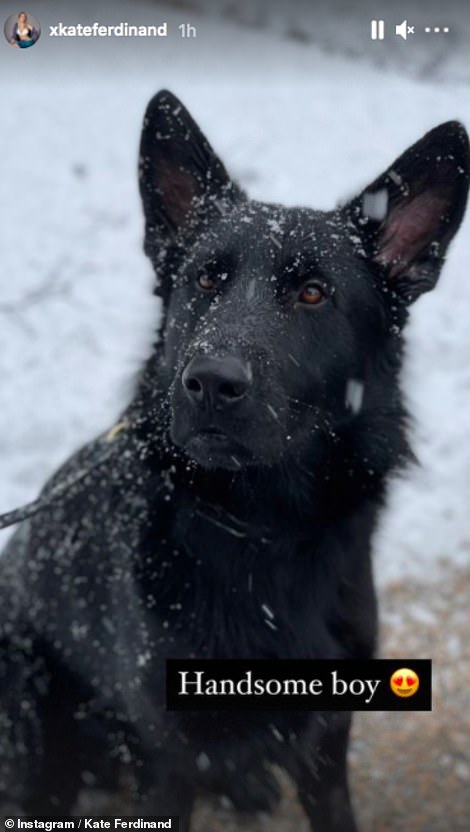 Not the usual walk: Kate Ferdinand shared adorable pictures of her cute pooches investigating the white stuff on their walk 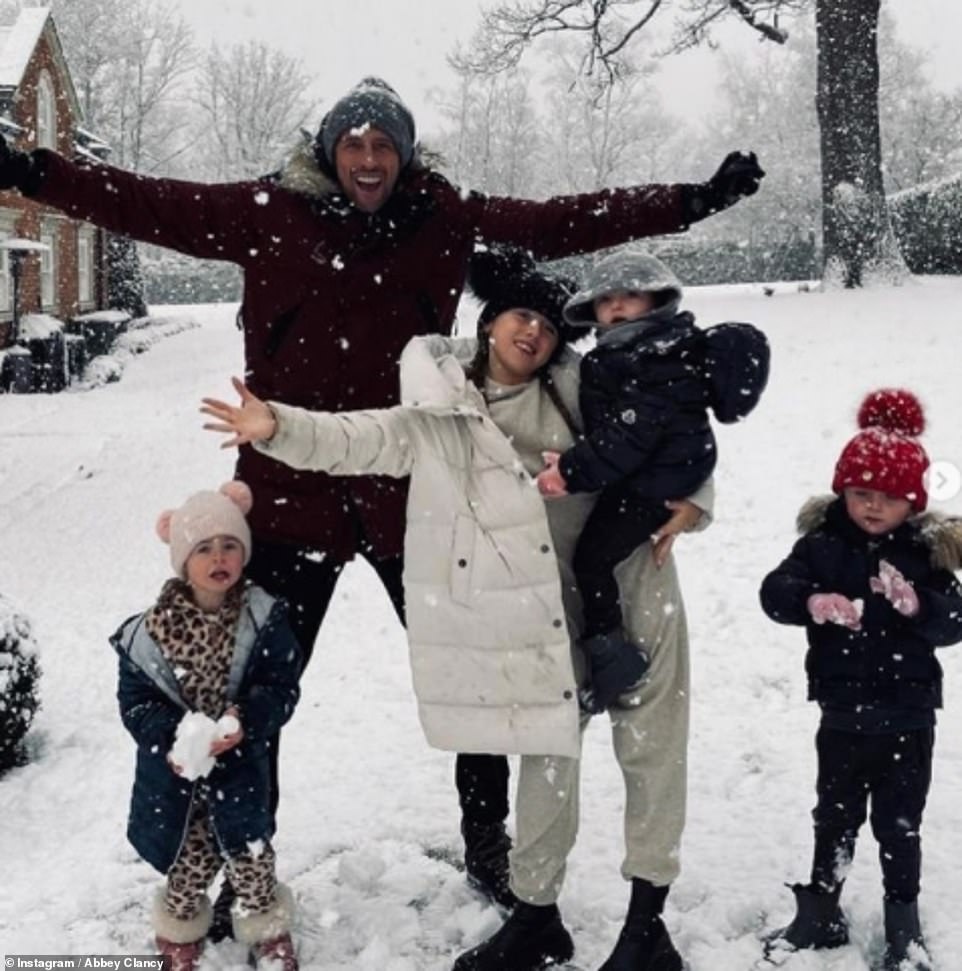 Loving it! Abbey Clancy’s family looked like they were having a fabulous time as they donned their winter warmers for a bit of playtime in the snow 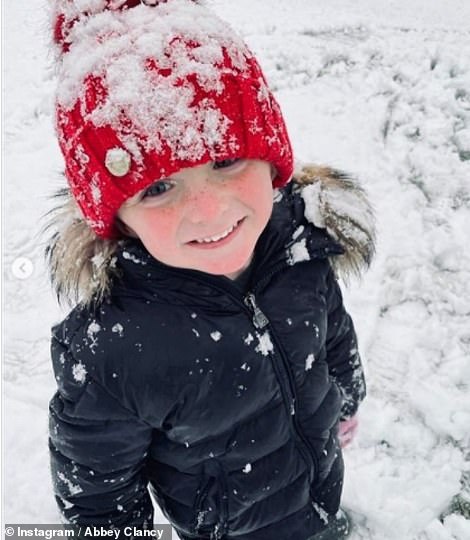 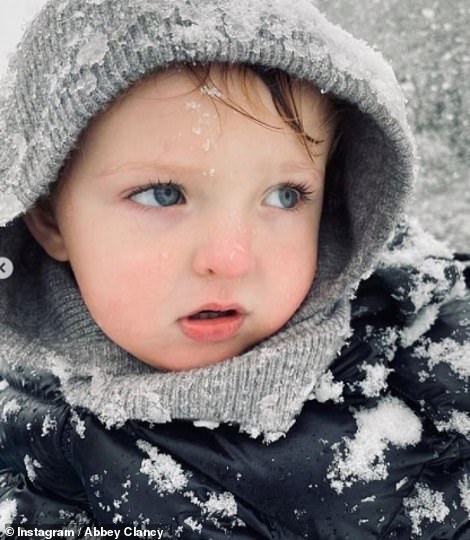 Making memories: The model shared several snaps of her children covered in snowflakes while playing outside 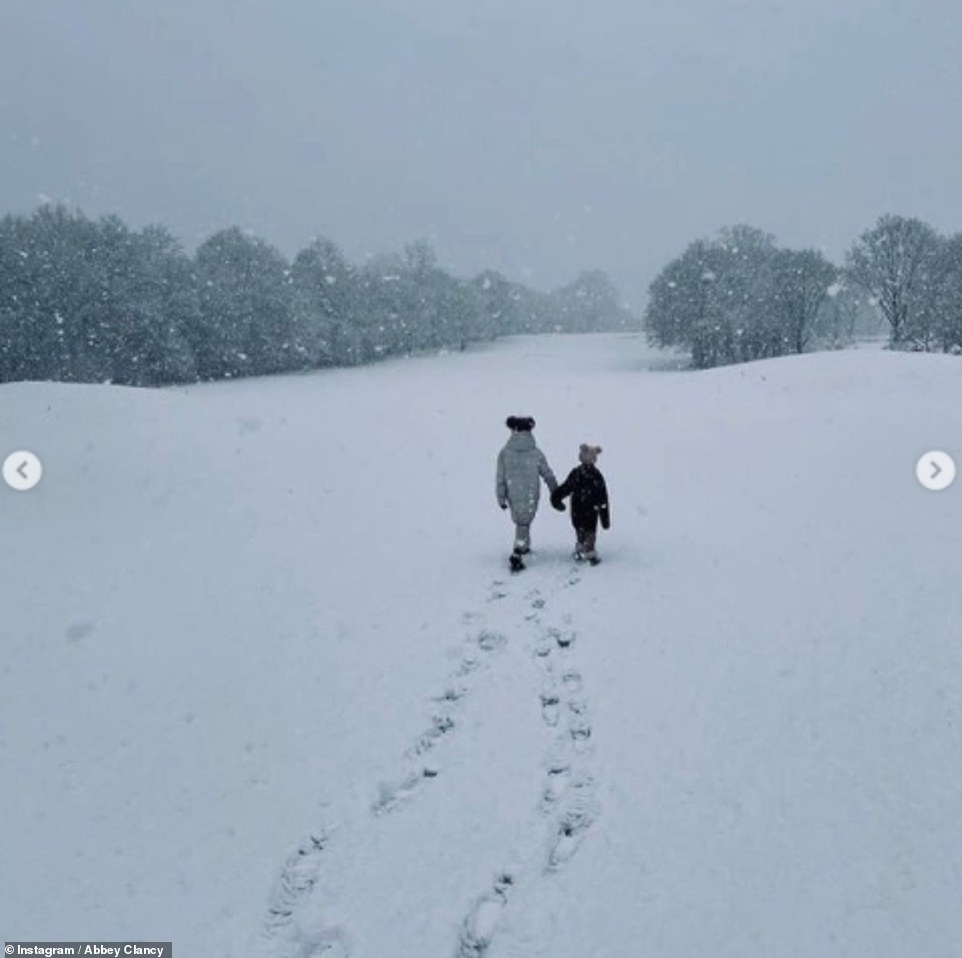 So much snow! Two of the model’s children held hands as they left footprints in the fresh snow during a stroll

Earlier this month, Holly shared a candid glimpse of her homeschooling set-up with her children as the classrooms remain closed during lockdown.

The media personality, who shares Harry, 11, Belle, nine and Chester, six, with husband Dan Baldwin, took to Instagram to upload a sweet snap with her youngest child as she helped with his reading.

The Dancing on Ice presenter previously admitting she was considering ditching the strict rules on how much time her kids spend in front of a screen.

Holly also recently offered support to one mum struggling with the challenges of homeschooling by offering to send her a printer. 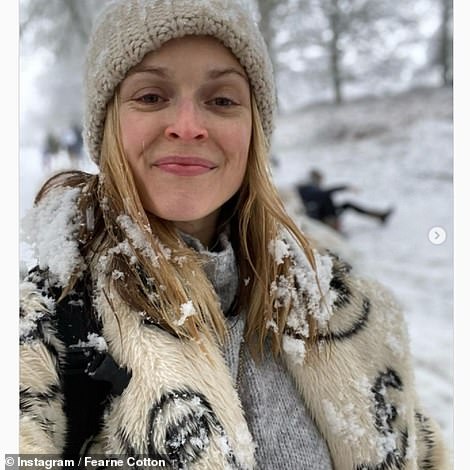 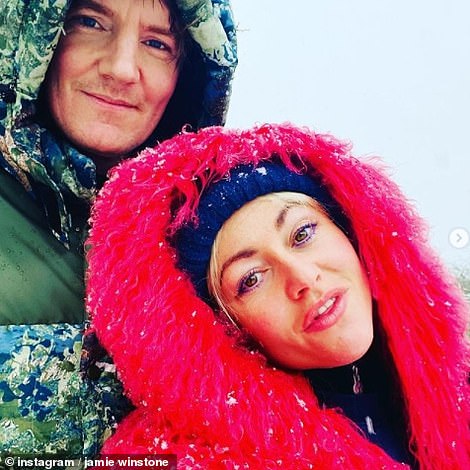 Snow selfies! Fearne Cotton looked sensational in a fur jacket and grey jumper as she made the most of the fun weather while actress Jamie Winstone (right) also opted for a cosy ensemble while out in the blizzard 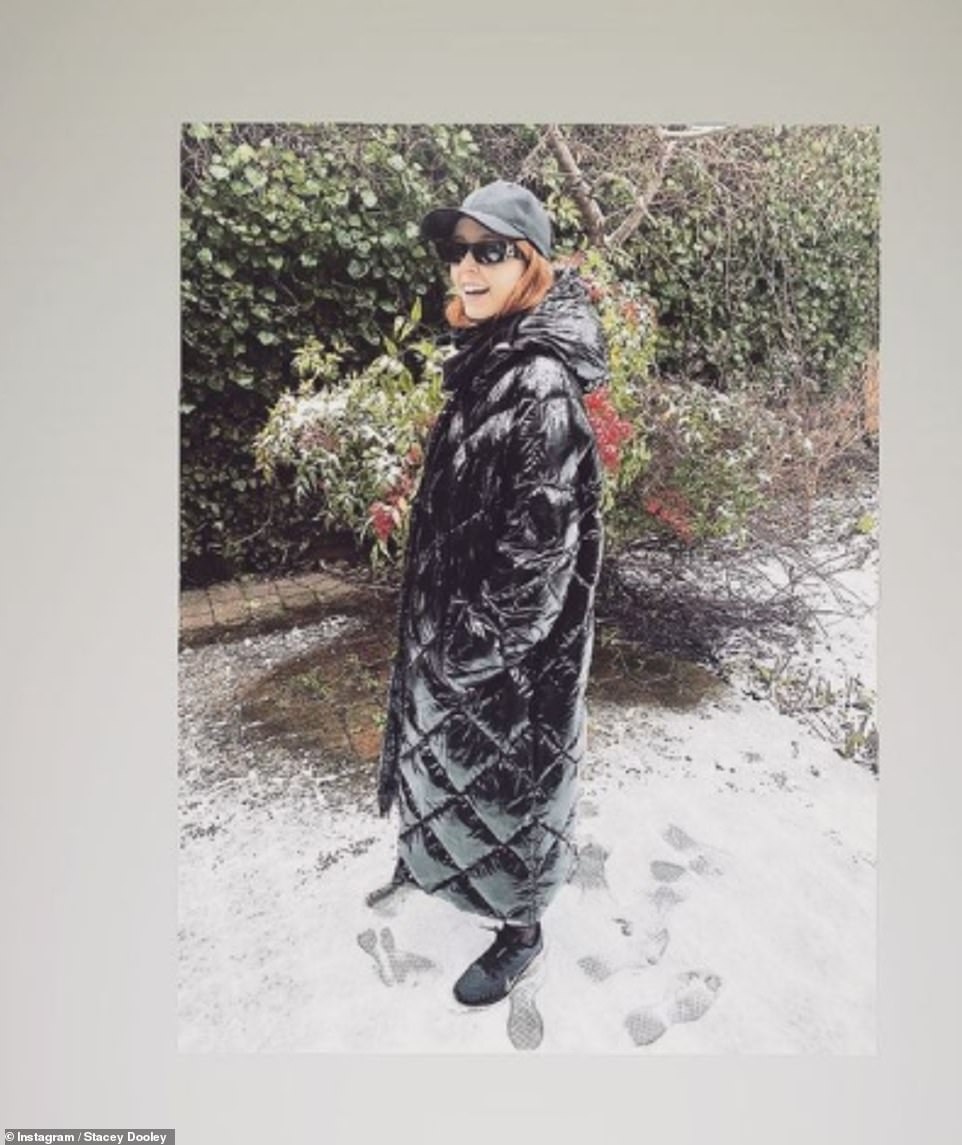 Winter fashion: Stacey Dooley managed to maintain her style credentials as she larked around in the show while donning a black quilted jacket 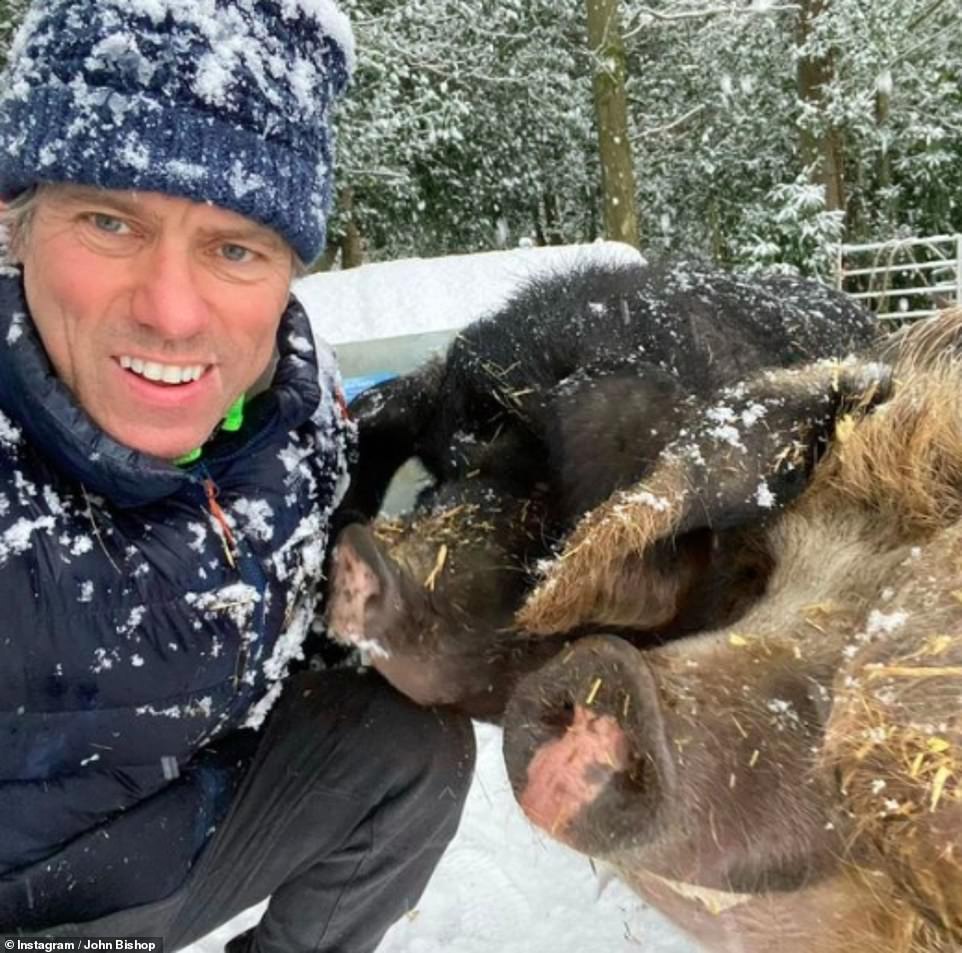 Having fun: John Bishop posed with his pigs for a snow selfie 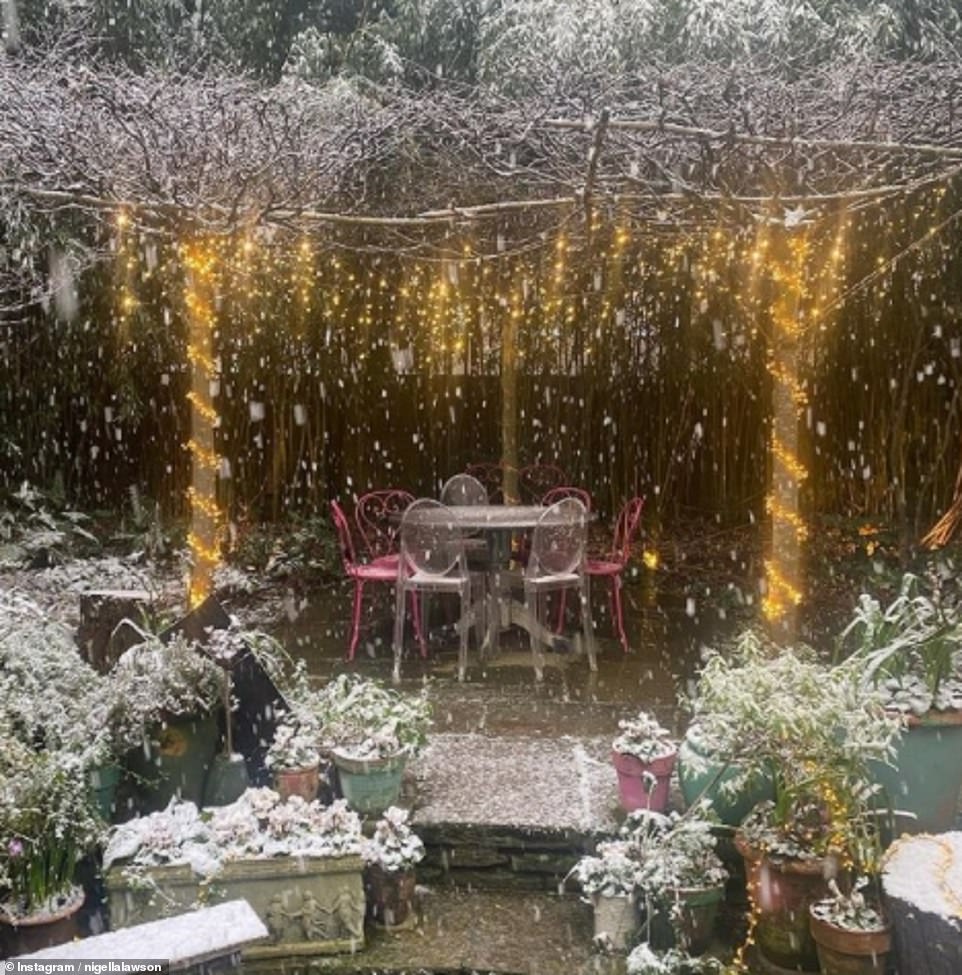 Beautiful: Nigella Lawson also shared a snap of her garden being coated in show, adding that the fairy lights had turned on as it was still dark in the morning 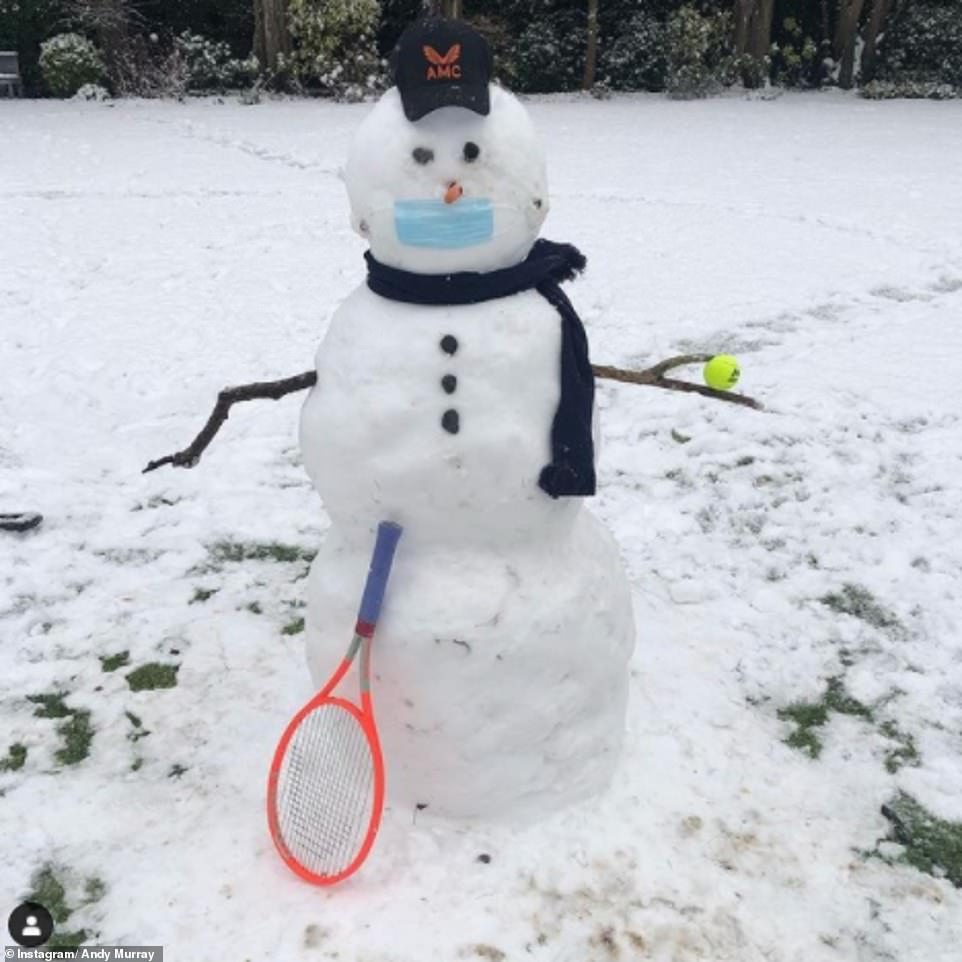 ‘Frozen out of the Aussie open’: Andy Murray also made a covid-themed snowman complete with a tennis racket

Touched my one mum’s struggle to provide resources to home school her children properly, Holly offered up her own spare printer, with fans hailing her a ‘really lovely person.’

The working mum has been keeping busy juggling homeschooling with work duties as she hosts the ITV daytime programme during the week, and also fronts Dancing On Ice on Sundays.

She shocked Dancing On Ice viewers recently when she wore an ‘inappropriate’ nude plunging gown on the ‘family show’.

The silk tulle dress embroidered in crystals and feathers divided opinion as some viewers claimed they were shocked while others called it ‘stunningly beautiful’. 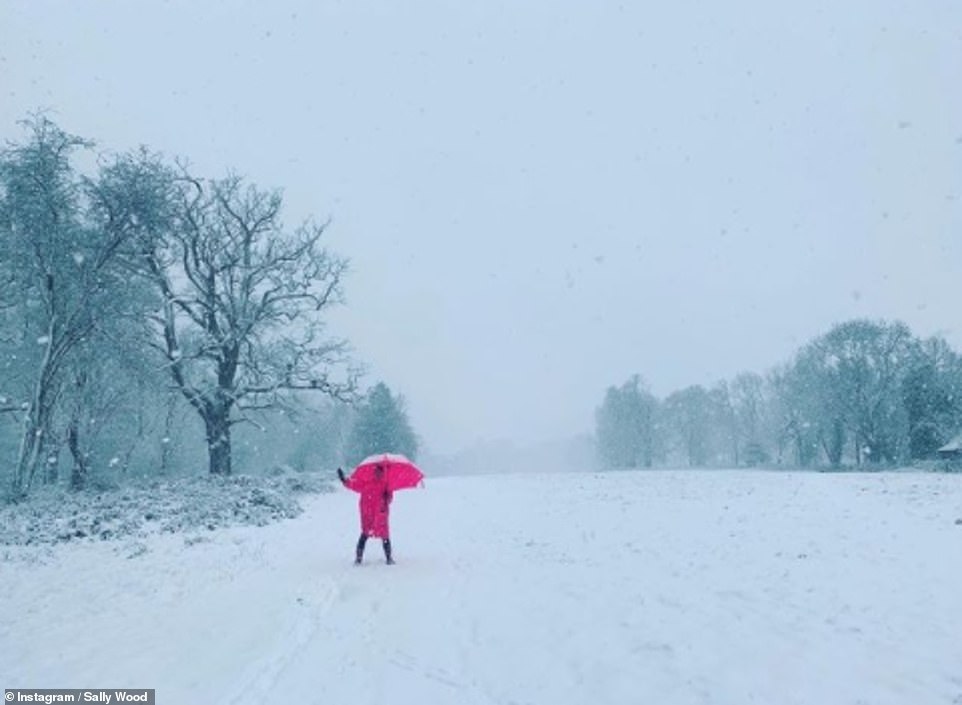 Winter wonderland! Sally Wood stood out in bright red as she enjoyed a winter walk through the snow on Sunday 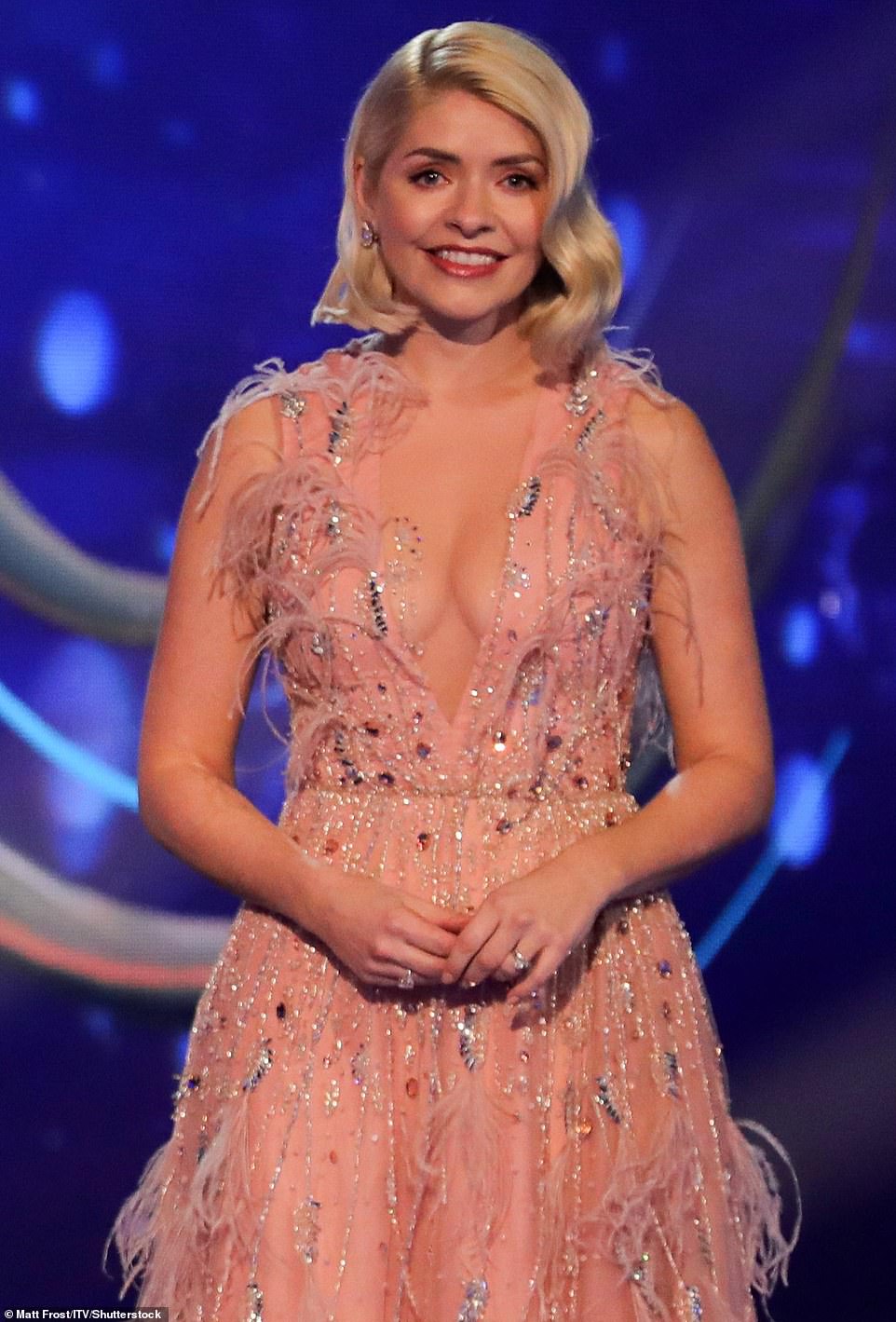 Risqué: The Dancing on Ice presenter divided opinion recently when she wore an ‘inappropriate’ nude plunging gown on the ‘family show’