On Friday, Prince Harry and Meghan Markle were both in attendance at the Service of Thanksgiving, but did not attend the reception held afterwards.

The royal couple instead returning home, with photographer Kelvin Bruce capturing the pair sat together in a convoy as they returned back to Frogmore Cottage, where they have been staying since returning to the UK for the Queen’s Platinum Jubilee. Harry was pictured smiling as he headed back with his wife in the Range Rover.

Although it’s not known why Harry and Meghan didn’t stay for the reception, they likely would’ve been anxious to get back to their children, Archie and Lilibet, who weren’t at the service.

It’s also likely that the royal pair would’ve wanted to keep a low-profile as they stood down as working royals back in 2020.

Ahead of their return, Harry and Meghan extended their lease on Frogmore Cottage for another year. HELLO! understands the Duke and Duchess of Sussex are set to keep hold of their five-bedroom home in a move that could suggest plans for more visits to the UK in the future.

Harry’s cousin Princess Eugenie and her husband Jack Brooksbank have lived at Frogmore for the past two years, but the couple recently vacated the property so the Sussexes can stay there during the Queen’s Platinum Jubilee celebrations. 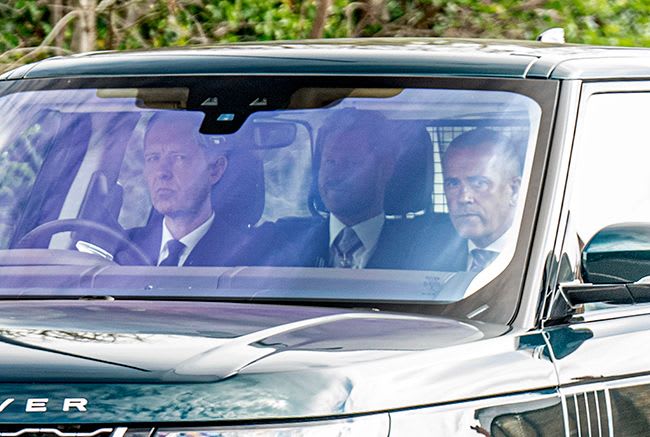 Frogmore Cottage underwent extensive renovation works in 2019 before Harry and Meghan initially moved in, converting the Grade II-listed property from separate apartments to a single-family home.

They paid back the £2.4million of taxpayers’ money after they stepped down as senior royals.

SHOP: 16 Jubilee sales that are SO royally good they’ll have you cheering

When Harry and Meghan paid back the renovation costs, the reports also revealed the royal couple covered the property’s rent from June 2020 until March 2022, leaving their future links to the UK up in the air – until now.

Frogmore Cottage is a short drive away from the Queen’s home Windsor Castle, making the location extremely convenient for visits, and it’s thought that Harry and Meghan will introduce Lilibet to the Queen for the first time during their visit.