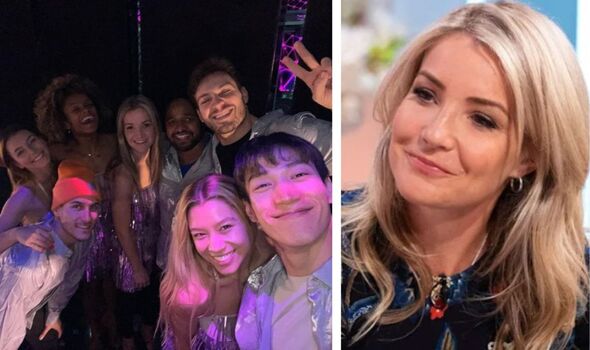 Although Helen Skelton narrowly missed out on clinching the winner’s trophy on Strictly Come Dancing, she wasn’t about to let her disappointment stop her partying the night away with her fellow celebrities and their pro partners.

Helen Skelton might have been pipped to the post by Hamza Yassin at the eleventh hour, narrowly missing out on the coveted Glitterball Trophy, but she was still in the mood for celebration after the Strictly Come Dancing final.

Molly Rainford, who also danced it out for a chance of being the 2022 winner, shared a montage of photos from the event, in which she singled out Helen as a “superwoman”.

Fans warmed to Helen after watching her 1920s cabaret style “revenge dance”, sympathising with her struggle after splitting from rugby ace husband Richie Myler within just four months of giving birth to their third child, Elsie.

“Helen, you’re such an inspiration to me and others. Superwoman! I’m so grateful to have met you and to call you a friend, thank you lovely lady!” Molly wrote in her honour on an Instagram post shared with 134,000 followers.

Meanwhile, in footage Helen shared to her Stories, she proved that she would keep dancing on, no matter what the result, as she partied with Fleur East.

Helen Skelton was declared a “superwoman” by Molly Rainford

The eight finalists posed together in an emotional photo posted by Molly Rainford, in which she said she had gained a “sister” in Fleur East, and a friend in “superwoman” Helen Skelton.

Helen Skelton could be seen among those partying next to fellow finalist Fleur East as she took to the microphone once the show was over.

Gorka Marquez urged Helen Skelton to regain her self-confidence and believe in herself during emotional tributes to her throughout the competition, acknowledging that she’d had a rocky road to navigate this year.

Ellie Taylor, who danced with pro partner Johannes Radebe this year, but was eliminated earlier in the competition, paid a heartfelt tribute to Helen, declaring her “hard as nails” and assuring her she could do “anything”.

“What do you do the morning after the Strictly final? You get back to work!” Helen Skelton announced chirpily in a video excerpt from her return to the BBC Radio 5 Live studio. She might have been exhausted, but she was determined that “the show must go on”.