Helen Flanagan took to Instagram Stories on Tuesday to reveal she’s had lip filler just a month after having breast augmentation.

The honest actress, 32, shared a video of herself applying lipstick as she detailed the reasons behind her latest cosmetic procedure.

She said: I’ve got big lips, but my bottom lip was bigger and because I’ve been overlining my top lip, I wanted a little bit of filler to even them out. 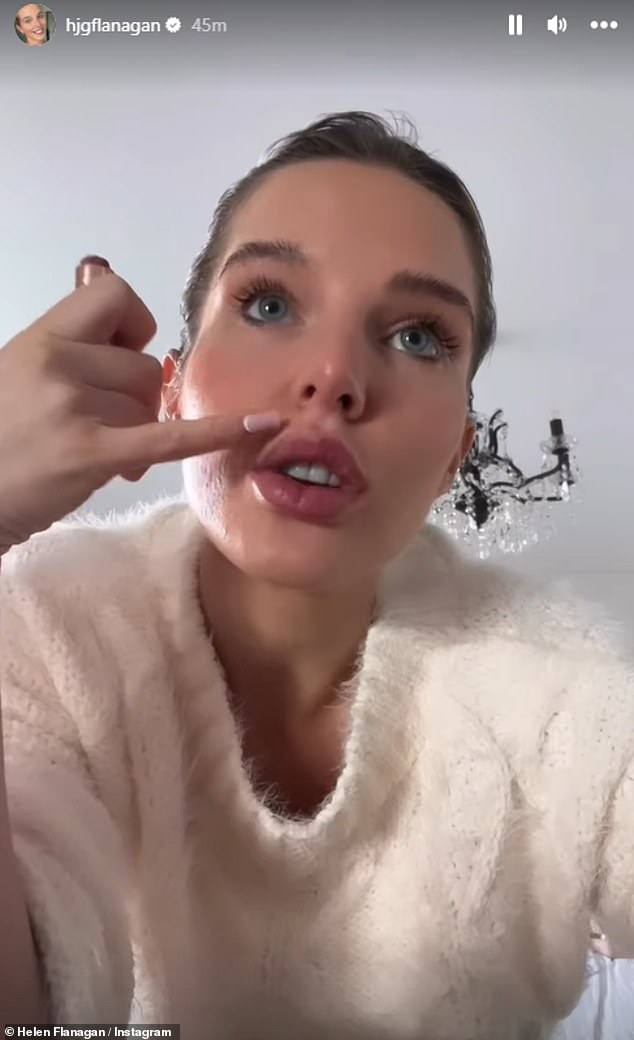 Helen Flanagan, 32, revealed she’s had lip fillers after breast augmentation surgery following her split from fiancé Scott Sinclair – she shared the news in an Instagram video on Tuesday 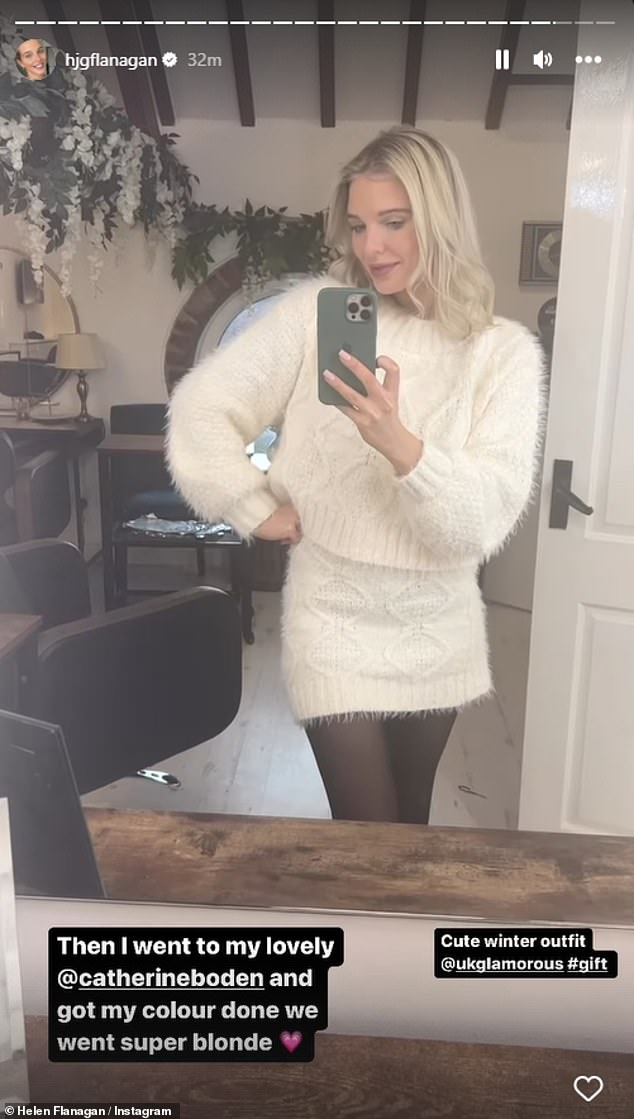 Changing it up: She also revealed she has dyed  her hair ‘super blonde’ as she mixes up her look after becoming single

Admitting she has also had Botox in the past, mother-of-three Helen, who recently split from her footballer fiancé Scott Sinclair. advised: ‘Don’t do anything when you’re too young.’

She continued: ‘I’m 32 now. I have Botox and that’s my choice. I support women whatever choices they make. I thought about this for a long time before going ahead with it.’

In 2019, Helen hit back at rumours she had lip fillers after she was accused of having a trout pout.

She told a fan: ‘I’ve never had my lips done x you can’t have those kind of treatments while breastfeeding anyway it’s a lipgloss that makes your lips look bigger.’ 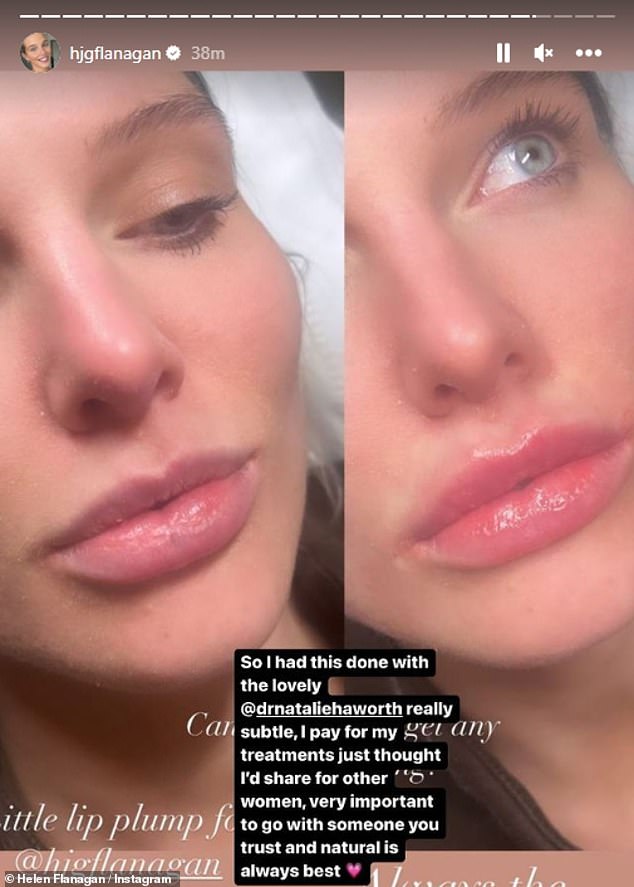 Pouty: While the results of Helen’s filler are subtle, she shared a before and after transformation shot on her grid 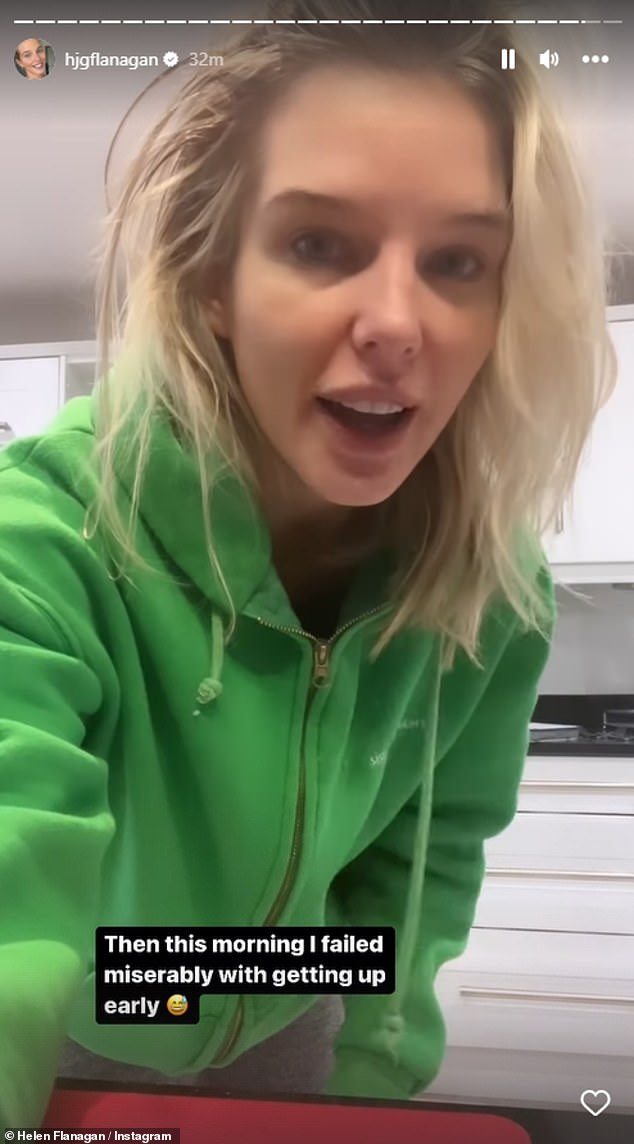 Keeping it real: But it’s not all glamour as Helen also revealed just how she is not a morning person soon after

At the start of the month, Helen spoke candidly about undergoing a breast augmentation following her break up from her footballer beau.

And she continued to show off the incredible results of the procedure with a stunning social media post on Sunday.

The former Coronation Street star slipped into simply black lingerie as she enjoyed a pampering session in her lavishly decorated bathroom.

Advertising a cosmetics brand Hey Estrid she flaunted off her jaw-dropping figure as she beamed for the camera. 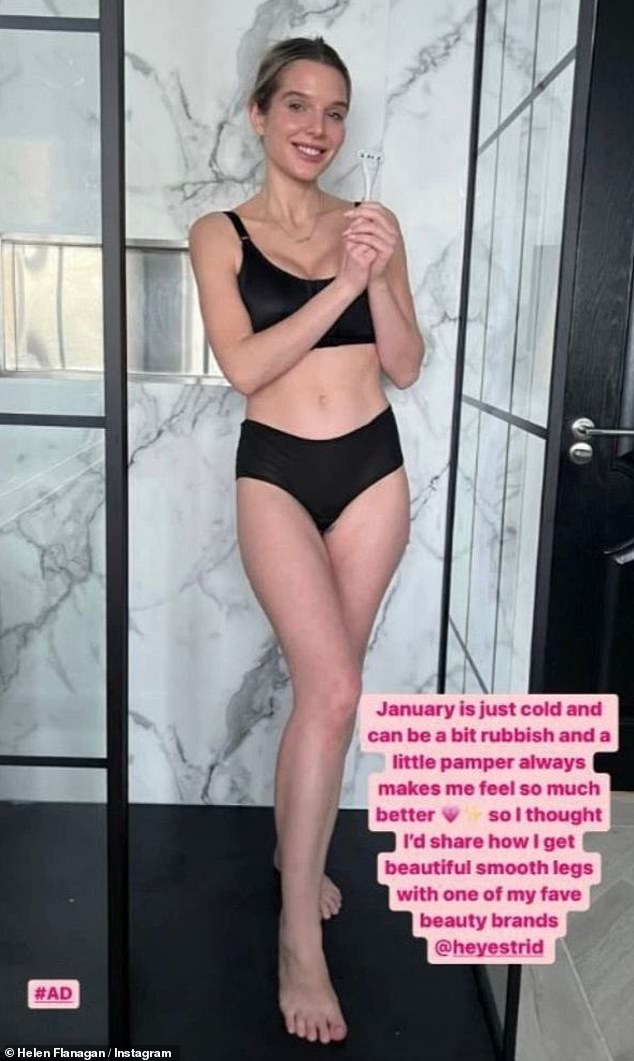 Busty: Helen showed off the incredible results of her recent boob job with a stunning social media post on Sunday

Helen accentuated her features with a light dusting of make-up and tied back her brunette tresses.

She then showed off her slender pins as she posed with one leg in the bathtub and blew a kiss to the camera.

Earlier this month revealed she’s had a boob job and admitted she was ‘really nervous’ to share the news but felt she needed the surgery since her breasts ‘became really saggy’. 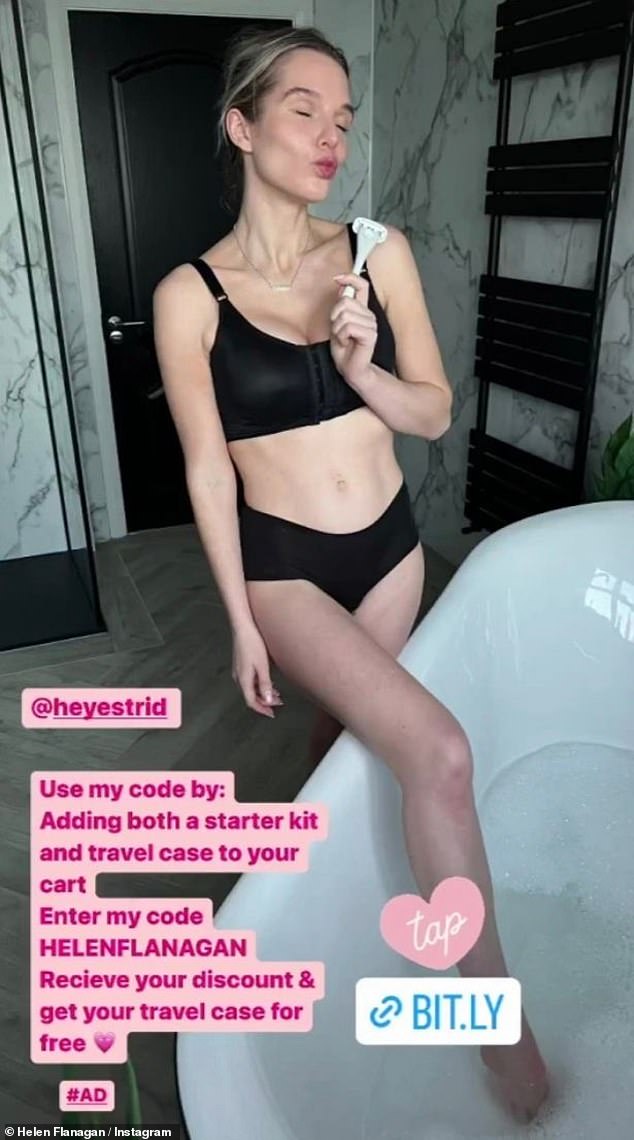 Drop dead gorgeous: The actress slipped into simply black lingerie as she enjoyed a pampering session in her lavishly decorated bathroom

While still in recovery, Helen – who split from Scott in October – claimed she went under the knife in a bid to ‘feel more confident’.

She also explained how her decision had been influenced by a reduction in her bust from an E cup to ‘not filling a B cup bra’ caused by breastfeeding her three children, Matilda, seven, Delilah, four, and Charlie, 17 months.

While holding off from displaying the results, the newly-single star said in the vlog: ‘Hi, so I wanted to pop on here. I’m actually really nervous about sharing this actually but I’ve had a boob job.

‘I had it done on Thursday. Yeah, so I’m in recovery at the moment. I have been really nervous about sharing this, because you always get some, like, not very nice comments or what have you.

‘But yeah, it’s just something that I did for myself, I really wanted to do it for my confidence. I have been really nervous about sharing this. Obviously I very much am for body confidence, and very much for supporting other women, but supporting women in all choices that they decided to do.

‘I think if something really is bothering you, then I think, you know, it’s a good thing to do something about it. 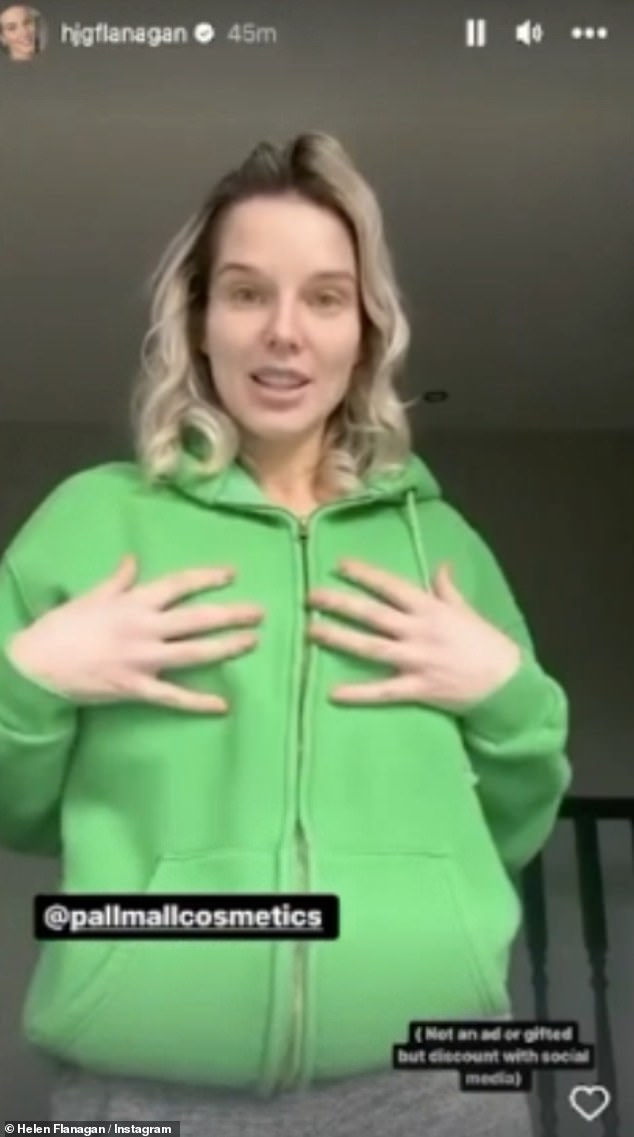 Candid: Earlier this month revealed she’s had a boob job and admitted she was ‘really nervous’ to share the news but felt she needed the surgery since her breasts ‘became really saggy’

‘I’m on day two of recovery, I’ve literally… my friend just helped me wash my hair and dry it because you can’t actually… you can’t, you can’t shower properly, you have to keep the wounds dry, I have this kind of like, support bra on, and you can’t get it wet.

‘So these Stories are probably going to be quite long so you might want to get yourself comfy, but I’m just going to talk about the whole thing, really.’

Helen confessed she decided on having the operation after becoming a mum to Delilah but waited until she’d welcomed Charlie, since she wanted to have another baby. 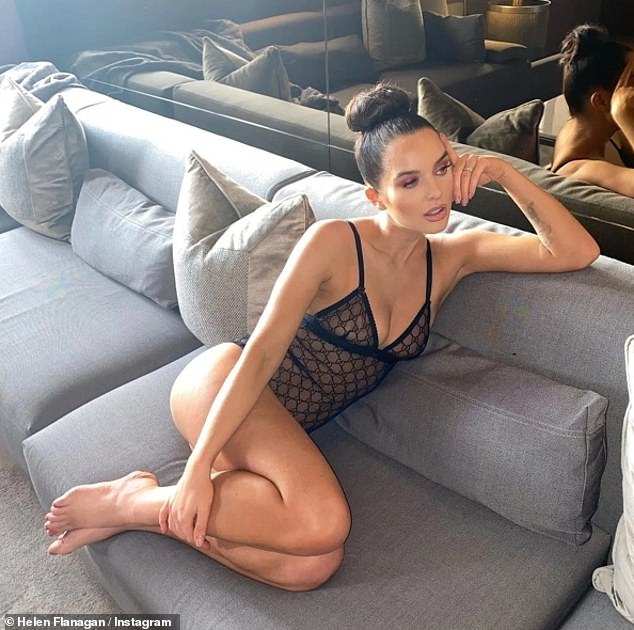 Sultry: The actress has previously shared shots of her in lingerie to her Instagram and revealed she was ‘big and busty’ before having children

‘Basically, my boobs just changed so much from pregnancy and breastfeeding. And it’s a really tricky one here, because I loved all my breastfeeding journeys. I’m a massive supporter of breastfeeding.

‘I think it’s an amazing experience that you can have your children and I would do it, you know, time and time again. But in total, I probably breastfed for about… I would say about three years.

‘So Matilda was eight months and I’ve had my babies all kind of like close together. Delilah was 13 months. And yeah, Charlie was 14 months. So it’s all in together really about three years of breastfeeding.

‘I think it’s because I was quite big and busty before. There’s no other nice way, I keep trying to think of a nicer way to say it. But the reason… they just sagged.

‘When I first Matilda, my boobs were fine. In fact, they went they went smaller, which I really liked. I think my frame change, having children. I’ve always been slim and small but I kind of lost quite a lot of weight from having children. 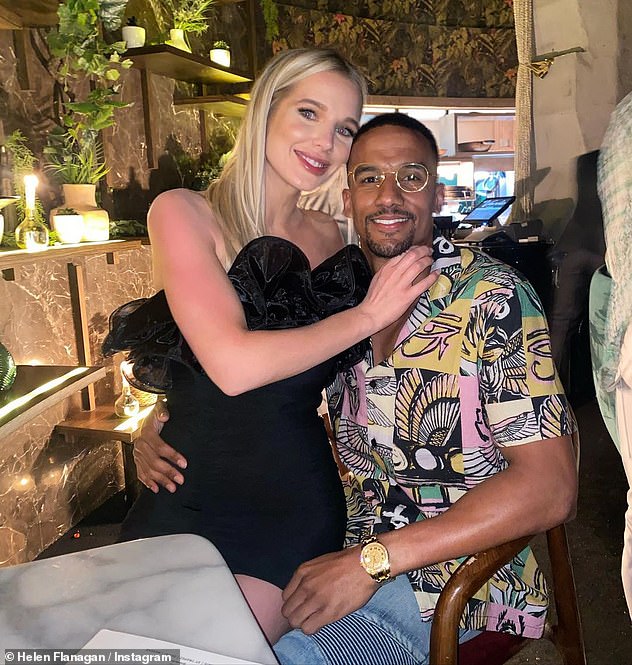 Complicated: Helen split from beau, with whom she shares three children, Scott Sinclair in October