Harry Kane and his wife Kate have announced they’re expecting their third child together.

The couple, who recently celebrated their first wedding anniversary, shared a sweet snap of their gender reveal to Instagram on Friday.

Football star Harry, 26, and Kate, 27, are already parents to their two daughters Ivy Jane, three, and Vivienne Jane, who was born in August 2018. 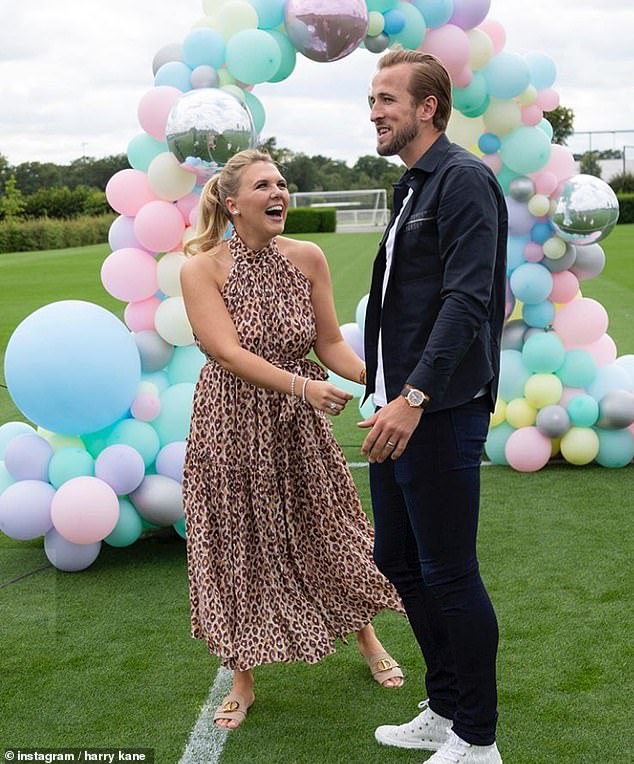 They’re expecting! Harry Kane and his wife Kate have announced that they’re set to welcome their third child together in a sweet gender reveal snap shared on Instagram on Friday

Taking to Instagram on Friday night to share the happy news, the couple posted the same image on both of their accounts.

Kate could be seen holding onto her husband’s hand as she laughed and Harry smiled while looking away from the camera.

The mother-of-two looked sensational in a halter-neck leopard print dress which she paired with some slip-on sandals.

In the background an impressive arch could also be seen, which boasted blue, pink, silver and green balloons. 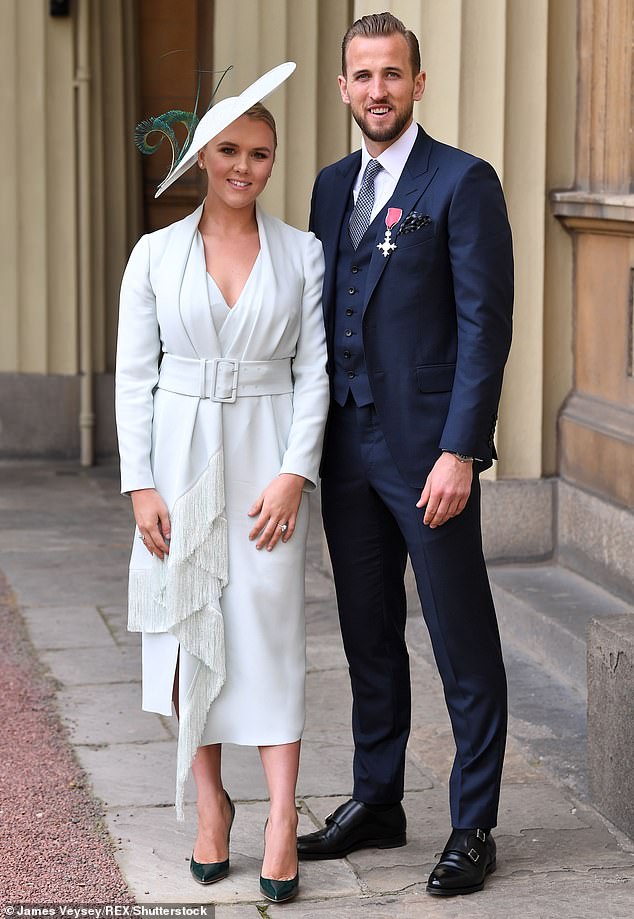 Couple: The footballer, 26, and his wife, 27, recently celebrated their first wedding anniversary (pictured in March last year as Harry received his MBE)

Have a guess: Harry and Kate both used pink and blue heart emojis to encourage their fans to have a go at trying to guess their third child’s gender 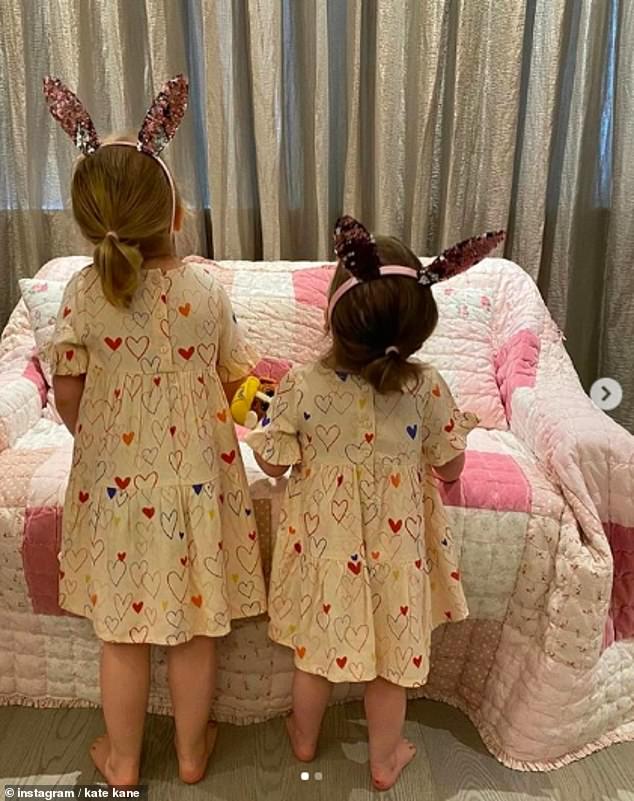 Growing family: They are already parents to two daughters Ivy and Vivienne (pictured at Easter earlier this year)

Both Harry and Kate captioned their pictures with a blue and pink heart emoji, which caused many followers to guess the baby’s gender.

However, they have kept fans waiting and haven’t revealed if their child is a boy or a girl yet.

It comes after the loved-up couple marked their first wedding anniversary from the confines of lockdown with Kate sharing details of the day on Instagram.

Sharing with her 145,000 followers,  Kate posted an image of a Friends-inspired mug with: ‘Our first anniversary 2020 – The One Where We Were In Lockdown’ – a year on from their exotic wedding at an undisclosed location.

Kate gave a sneak peek into the day, as she shared a picture of the mug with the slogan written in Friends font while the background featured masses of flowers. 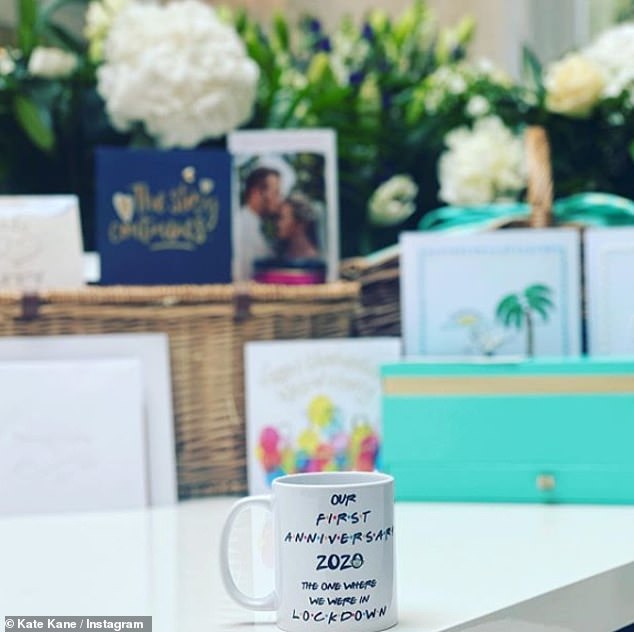 Sweet: Harry and Kate celebrated their first wedding anniversary last Friday, with Kate marking the occasion by sharing a snap of her Friends inspired mug

Among the flowers was a number of cards, including one featuring a picture of the duo enjoying a tender moment with Harry kissing Kate’s head.

Harry proposed in July 2017 when the couple, who were childhood sweethearts after meeting while they were at school, were away on holiday in Barbados.

At the time, the England captain joked to his partner that he would not cry on his wedding day and that he would only shed tears if England won a trophy.

He said: ‘I always wind my missus up that I’d cry if we won a trophy with England. And she said if you don’t cry when I walk down the aisle then she won’t go through with it!

‘I’m not a crier, I’m not someone who cries a lot. My missus has probably never seen me cry. So we’ll have to see what comes first.’

They gave snippets of details of their intimate and stunning beach wedding yet never revealed where they tied the knot.

The loved-up couple have two children together – Ivy Jane Kane and their youngest Vivienne Jane Kane, who was born in August 2018. 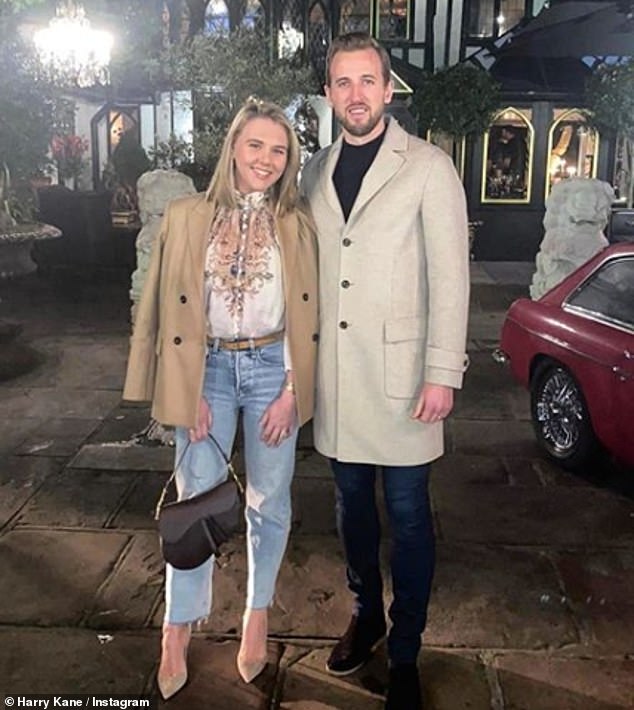 Childhood sweethearts: Kate and Harry met while they were at school and got engaged while on holiday in Barbados in 2017 (pictured in January)