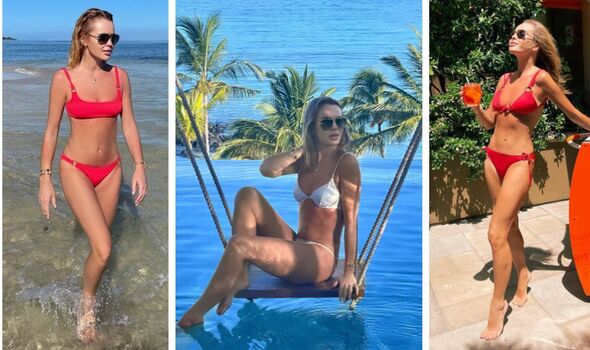 Amanda Holden looked stunning in this range of sensational swimwear snaps – and she’s said she is determined to put her flawless figure on display in the years to come too, having admitted she wants to be wolf-whistled at even when she’s a pensioner.

Ageless Amanda Holden looks sensational in this round-up of her best photos from last year.

The star has enjoyed a series of luxurious holidays, including her most recent getaway over the festive season, when she stretched out her long limbs at a Mauritius resort while surrounded by palm trees.

Earlier in the year, she also practised her diving skills in glamorous Greece, and biked around picturesque Cornwall, while work recently took her to Sicily for filming sessions.

The Britain’s Got Talent judge declared passionately in one Facebook video: “I live for holidays!” – and her compilation of bikini-clad photos clearly documents how much she enjoys sun, sea and sand.

One of Amanda’s favourite swimwear brands is Melissa Odabash, and she’s rocked numerous bikinis by the renowned designer over the months, among others, much to the delight of her 1.8 million followers.

Amanda Holden enjoyed some winter sun over the festive season as she lounged at the LUX Grand Baie Hotel in Mauritius, which was designed by her pal Kelly Hoppen CBE.

Amanda Holden’s fans joined in with her humour, admitting they’d “give anything to have a tough day like hers” as they witnessed one of her Grecian getaways.

Strictly Come Dancing host Tess Daly marvelled that she was exuding “absolute goddess vibes” on one post, while Amanda’s Heart FM co-host Ashley Roberts admiringly echoed in agreement, while fan @chrispicsandspots quipped: “Every boat wishes to have that most beautiful figurehead ever!”

Amanda Holden sizzled in shorts in California on her Easter break

Clearly not one for the British chill, Amanda Holden made the most of the balmy weather in Santa Monica, California back in April, reclining on the sandy beach as she wished fans a Happy Easter.

Amanda Holden stripped off in this sizzling summer video

Brandishing a suncare product, she transformed from a shorts and shirt-clad look to just a skimpy striped bikini with a nautical theme, as fans looked on.

Amanda Holden had been whisked over to Sicily with fellow celebrity pal Alan Carr to film for The Italian Job, and she wasted no time in getting herself to the beach, where she flexed her flawless physique while lounging in this giant inflatable unicorn.