Gabby Allen looked sensational in a tiny bikini as she went sunbathing in a park on Monday, after claims emerged married Dan Osborne had sent her flirty messages.

The Love Island star, 28, brushed off the drama as she put on a sizzling display and flaunted her washboard abs in the tiny two piece while chatting with friends.

The Sun claimed that Dan contacted his former CBB co-star Gabby in April, but she didn’t respond — months after the pair vehemently denied claims that they’d had an illicit tryst. 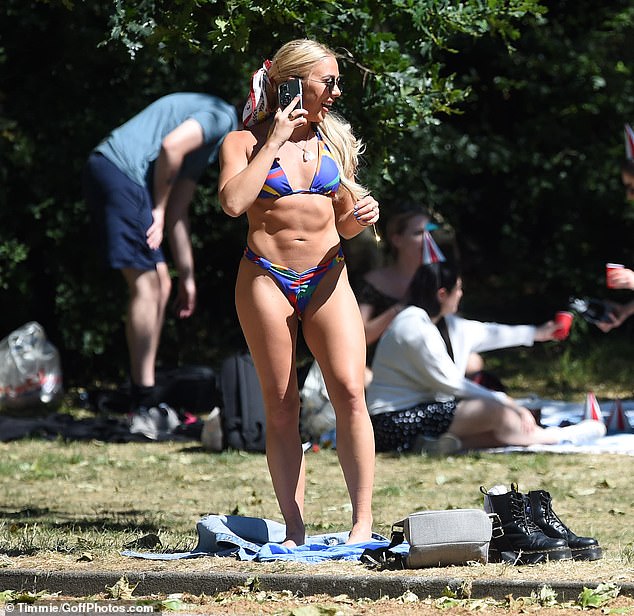 What drama? Gabby Allen looked sensational in a tiny bikini as she went sunbathing in a park on Monday, after claims emerged married Dan Osborne had sent her flirty messages

His wife Jacqueline Jossa then denied allegations the pair had argued over the messages and that she had walked out on him.

Gabby displayed her perky cleavage and rippling abs in a blue, pink and orange bikini top while talking on her phone.

A pair of matching thong bottoms revealed her peachy derriere as she soaked up the sun.

The beauty wore her blonde tresses in a chic updo tied with a scarlet trimmed scarf. 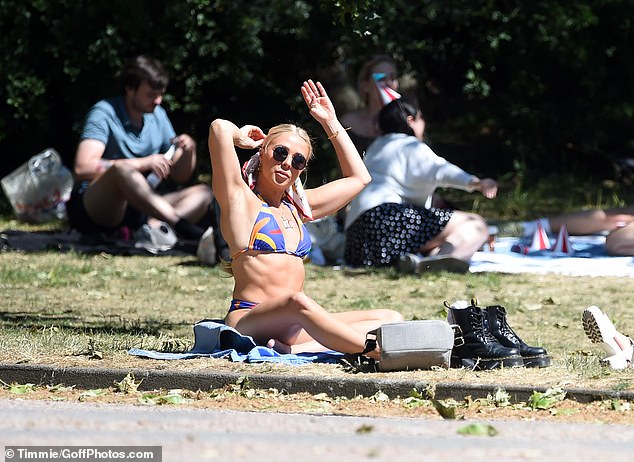 Toned: The Love Island star, 28, brushed off the drama as she put on a sizzling display and flaunted her washboard abs in the tiny two piece while chatting with friends 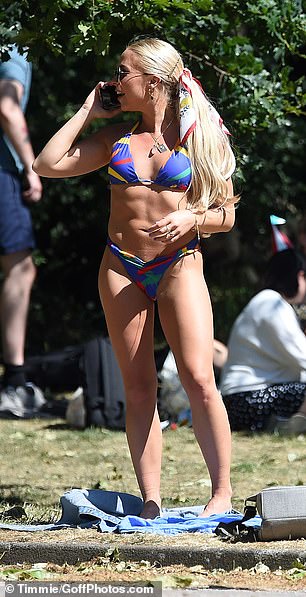 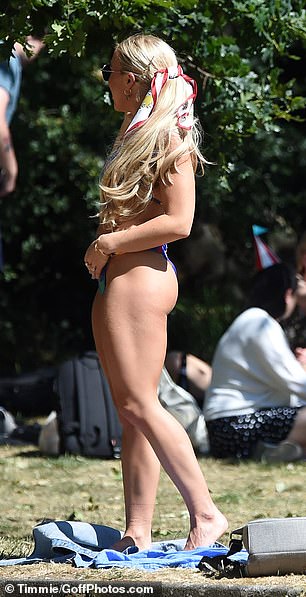 Gorgeous: Gabby displayed her perky cleavage and rippling abs in a blue, pink and orange bikini top while talking on her phone 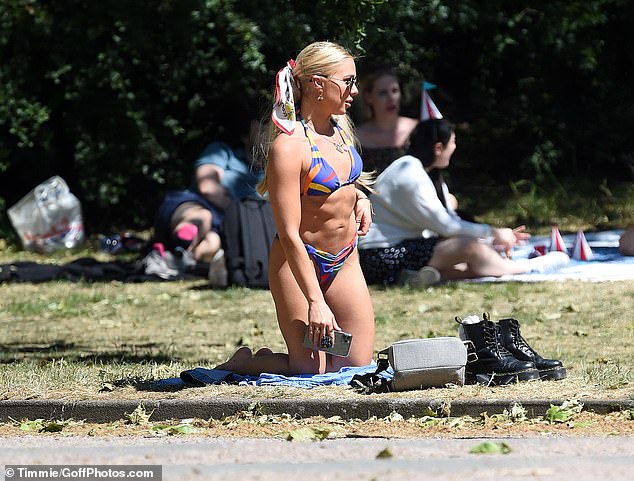 Sunbathe session: The star displayed her six pack as she relaxed in the sunshine 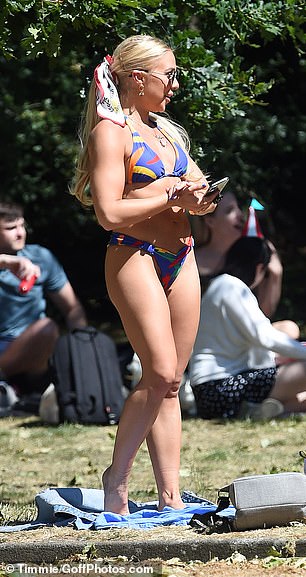 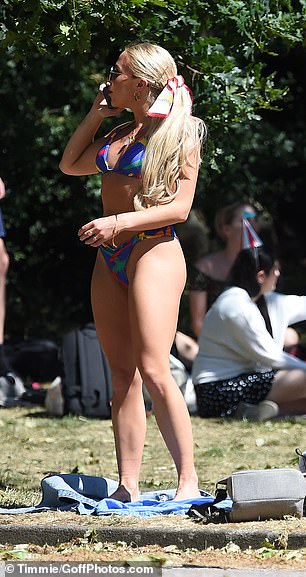 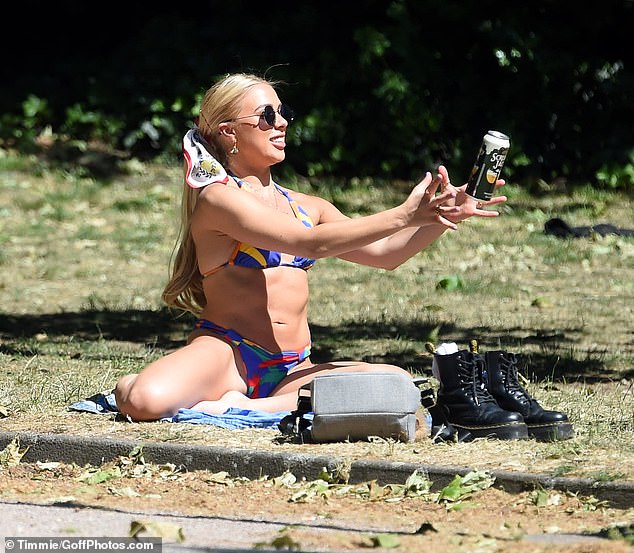 Fun: One of the star’s friends chucked her a refreshing drink during the afternoon

The star completed her ensemble with a pair of shades as she lay on a blue towel during her socially distanced sunbathe.

Gabby was also seen getting an ice cream with her friends while clad in a denim playsuit and biker boots.

The sighting comes amid a report at the weekend thatJacqueline walked out on Dan after learning of the messages, but a representative for Jacqueline told MailOnline: ‘To suggest Jacqueline and Dan have argued over messages is totally false.’ 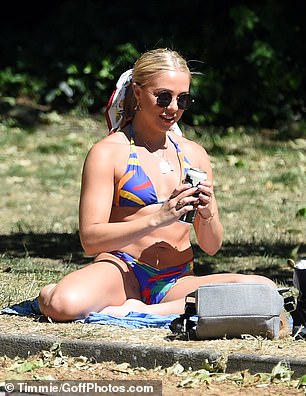 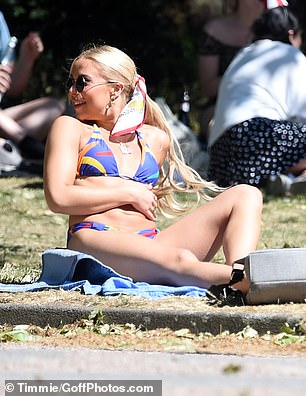 Glow: The star looked in good spirits as she relaxed in the sunshine with friends 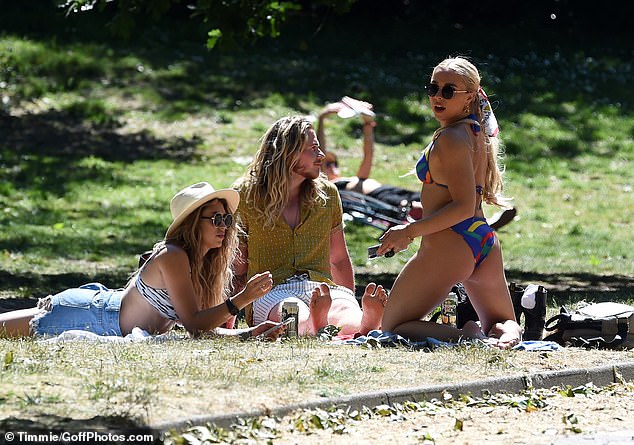 Peachy: Gabby revealed her pert derriere as she chatted with her friends 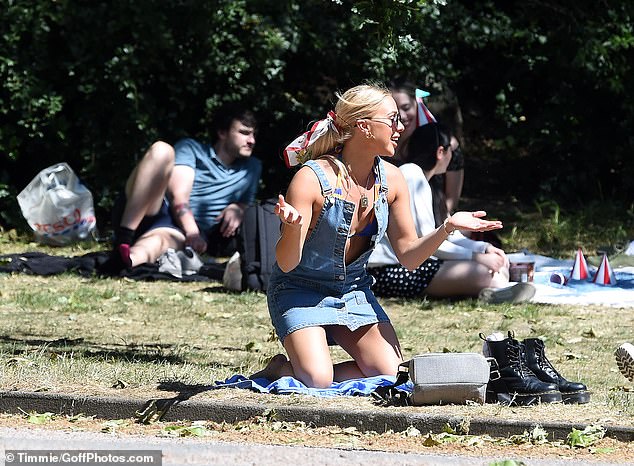 Animated: Gabby donned a denim dress for her trip to the park 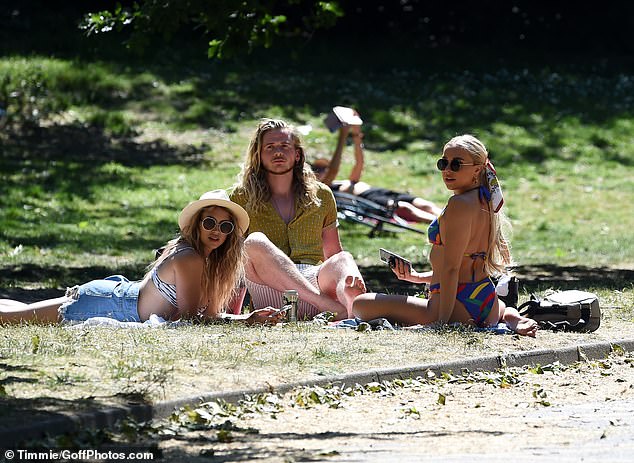 Style: Gabby looked stunning in her multicoloured bikini as she sunbathed 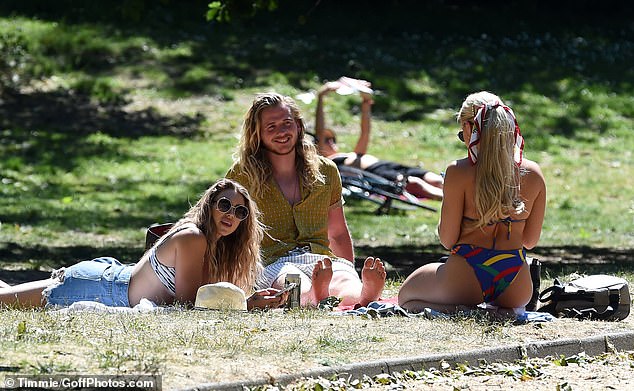 Summertime: Amid the lockdown Gabby hung out with close friends

MailOnline contacted representatives for Dan Osborne and Gabby Allen for further comment at the time.

A source told The Sun: ‘[Gabby] swears blind nothing ever, ever happened — and is furious about being dragged into his mess yet again. They last texted shortly before Dan went to Australia to support Jac in the jungle.

‘But that was all platonic from Gabby’s side. He did send her a suggestive message over Instagram last month which she never responded to. Gabby has zero interest in Dan, and she wants no association with him… Dan’s intentions seem less clear.’ 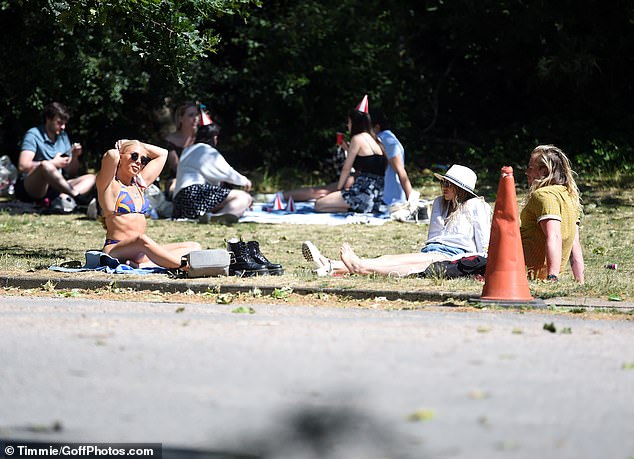 Beauty: Gabby showed off her toned midriff as she caught some rays 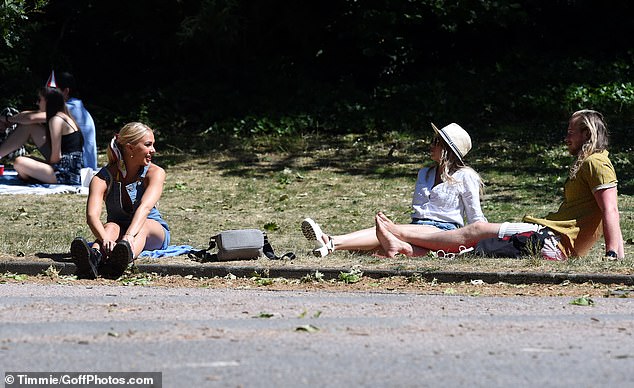 Chat: The star smiled at her pals as they whiled away the afternoon 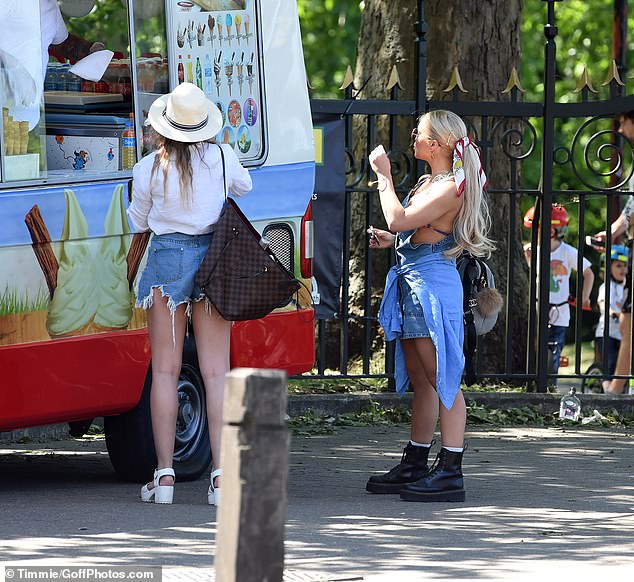 Fun: Gabby was also seen getting an ice cream with her friends while clad in a denim playsuit and biker boots 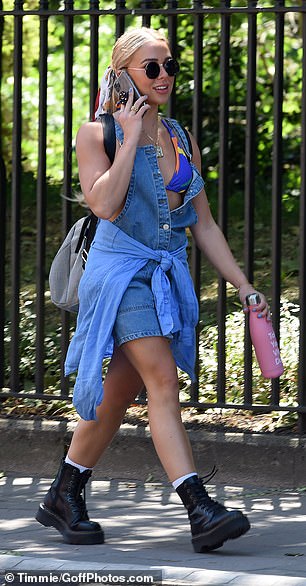 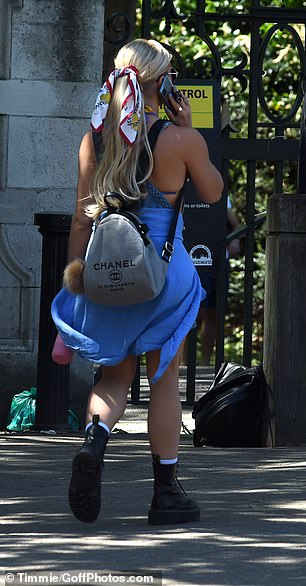 Style: Gabby caught the eye in her trendy ensemble as she soaked up the sun

However, the source has claimed that Jacqueline is putting family first amid the allegations, adding: ‘Dan has begged for one final chance, and of course she wants to fight for her marriage for the sake of their kids.’

It was claimed on Friday, Jacqueline has given her husband Dan Osborne, 28, a ‘last chance ultimatum’ as they work on their turbulent relationship.

Jacqueline has reportedly moved back into her family home on a part-time basis after claiming that she needed a break last week.

A source told The Sun: ‘Dan insists he has done nothing wrong but Jacqueline is frustrated he can’t just focus solely on her and thinks he has been communicating with other girls.’ 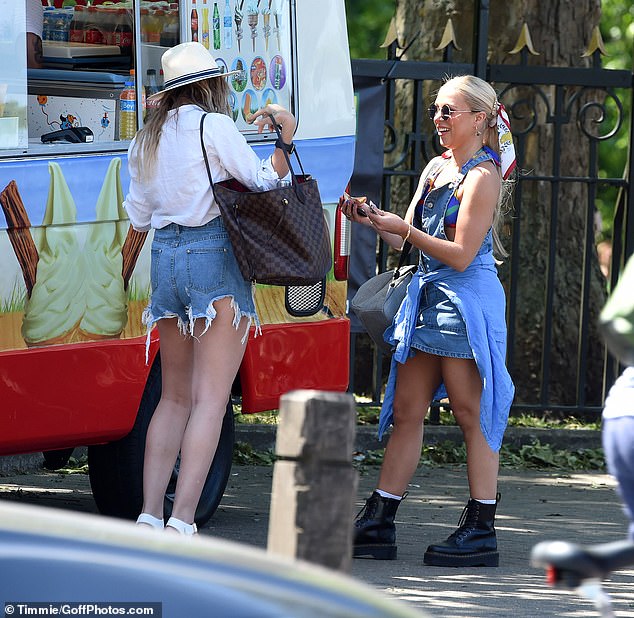 Chat: The star looked delighted to be reunited with a pal amid the lockdown 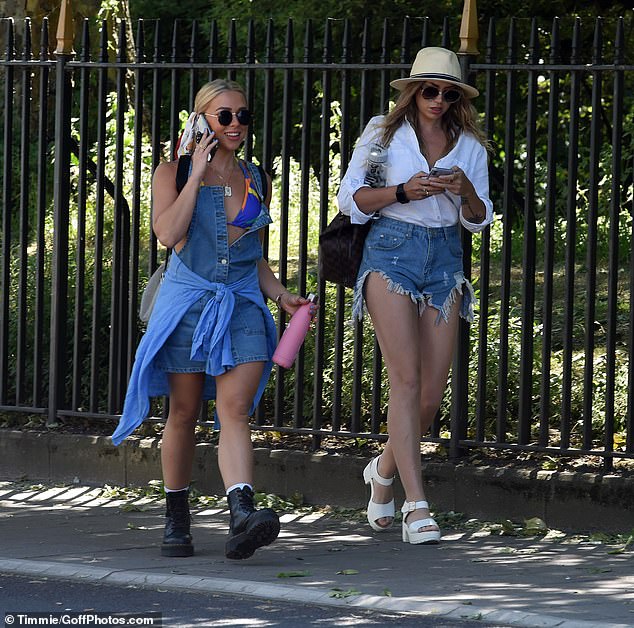 Leggy: Gabby displayed her toned legs as she strolled along on the phone 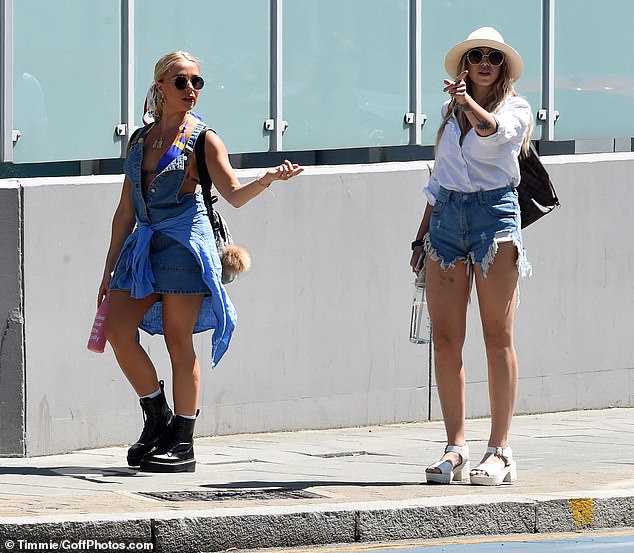 Temperatures soaring: The star looked fabulous as she chatted with her friend 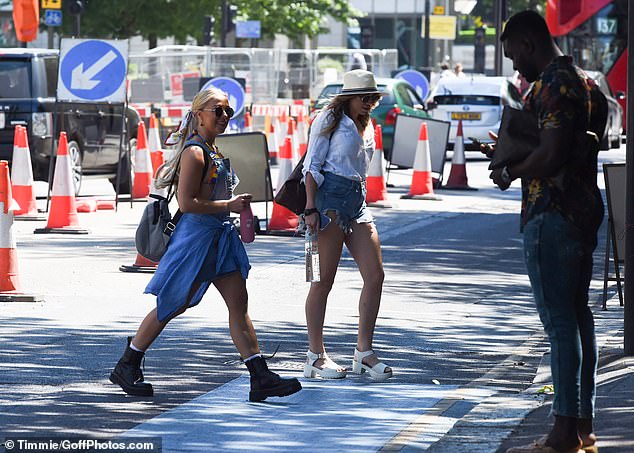 Strut: Gabby made the road her catwalk as she walked with her friend

‘She remains suspicious as she has caught him out before and he has form for being pictured chatting to attractive female celebrities at showbiz parties when she’s been at home or working.’

The publication also alleged that while Jacqueline has returned to her marital home she issued an ‘Osborne Ultimatum’, demanding that Dan ‘stop his infatuation with glamorous female reality stars.’ 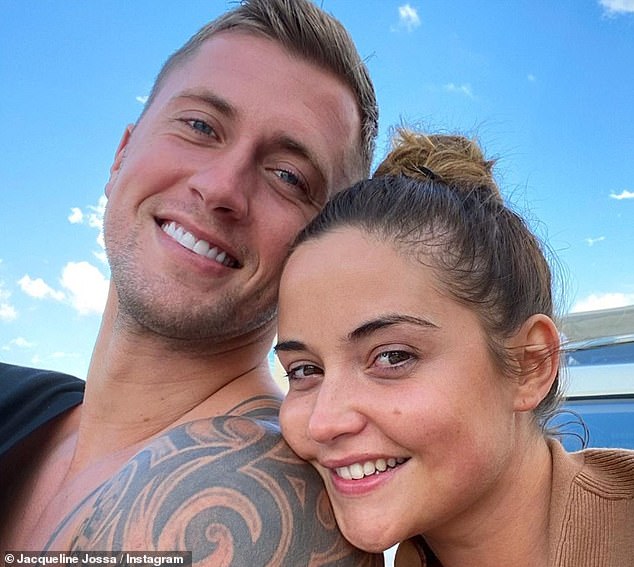 Striking back: The outing comes as Jacqueline Jossa hit out at claims she walked out on her husband Dan Osborne after he sent ‘flirty messages’ to Gabby 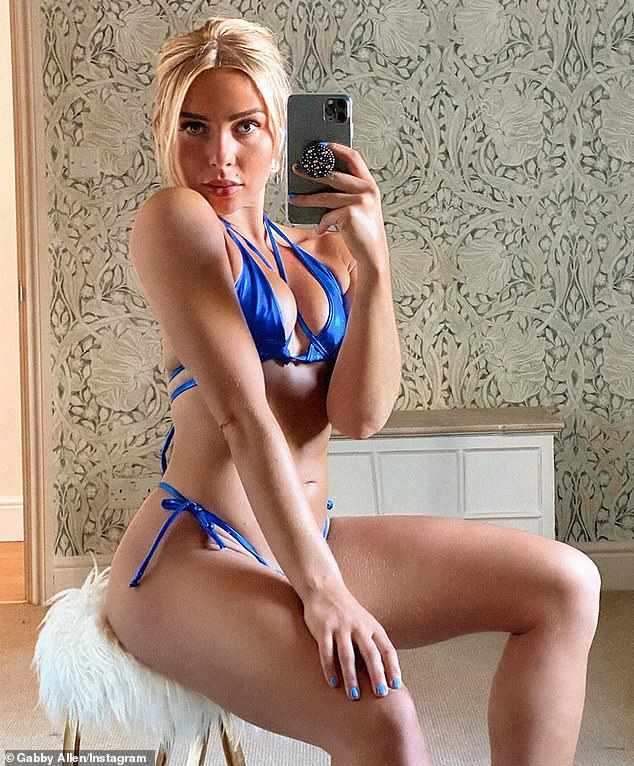 Message: The Sun has claimed that 28-year-old Dan contacted his former Celebrity Big Brother co-star Gabby in April, but she didn’t respond

The star  said Brandon, 24, is a ‘really good friend’ but nothing more, and admitted being single has been a ‘really positive thing for her’ after she split from Rak-Su’s Myles Stephenson last August.

Gabby admitted that a man would need to really add something to her life for her to date him and she’s determined to not have her life ruled by finding love. 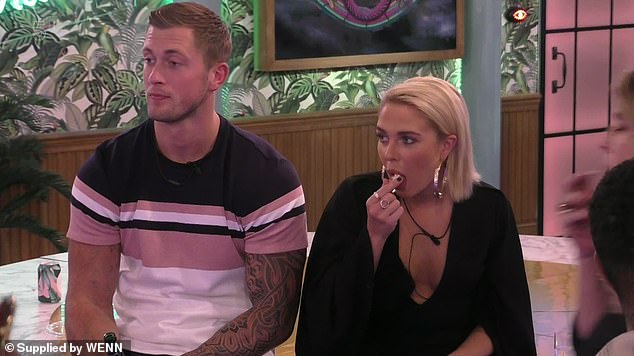 Old co-stars: The reality TV personalities were co-stars on Celebrity Big Brother back in 2018

Gabby and Brandon were first rumoured to be dating last month, when he posted a flirty comment under one of her scantily-clad bikini snaps.

But the fitness enthusiast insisted they are little more than close friends, telling OK!: ‘ No. We’ve known each other for a long time. He’s the loveliest person and a really good friend of mine, but that’s all it is.

‘Someone must have seen him comment on a picture on my social media, and automatically assumed he’s my boyfriend.’

Gabby was dating Rak-Su star Myles until August 2019, when she accused him of cheating on her, and also dumped her Love Island beau Marcel Somerville in February 2018 when she discovered he’d been unfaithful. 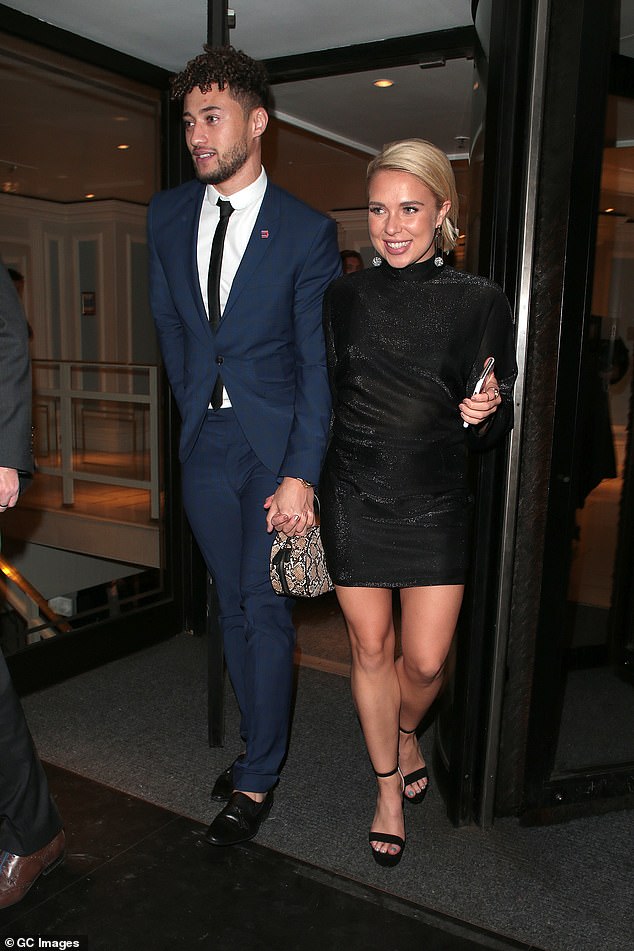 Over: Gabby was dating Rak-Su star Myles until August 2019, when she accused him of cheating on her