She knows how to have a good time.

And Farrah Abraham made the best of the sunny weather as she soaked up the sun in a barely-there bikini while combing the beach in Miami on Saturday afternoon.

The former Teen Mom star looked completely at ease as she played in the waves while enjoying a day to herself after attending an event at Donald Trump’s Mar-a-Lago resort. 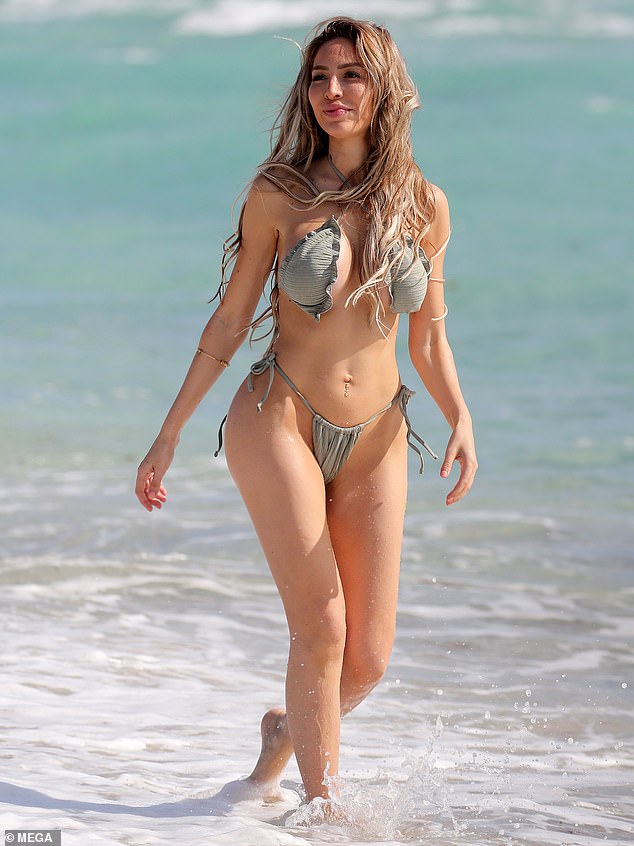 Soaking up the sun! Farrah Abraham was spotted stepping into the waves at a Miami beach on Saturday afternoon after attending a fundraiser at Mar-a-Lago the day before

Abraham showed off her incredible figure in a unique ruffled bikini top which criss-crossed across the top.

The 29-year-old paired her triangle top with matching bottoms that emphasized her curvy hips and toned legs.

She kept her lengthy dyed blonde hair in natural waves which cascaded down her back as she played in the water.

Abraham kept her accessories simple and opted for a single bracelet cuffed around her right arm. 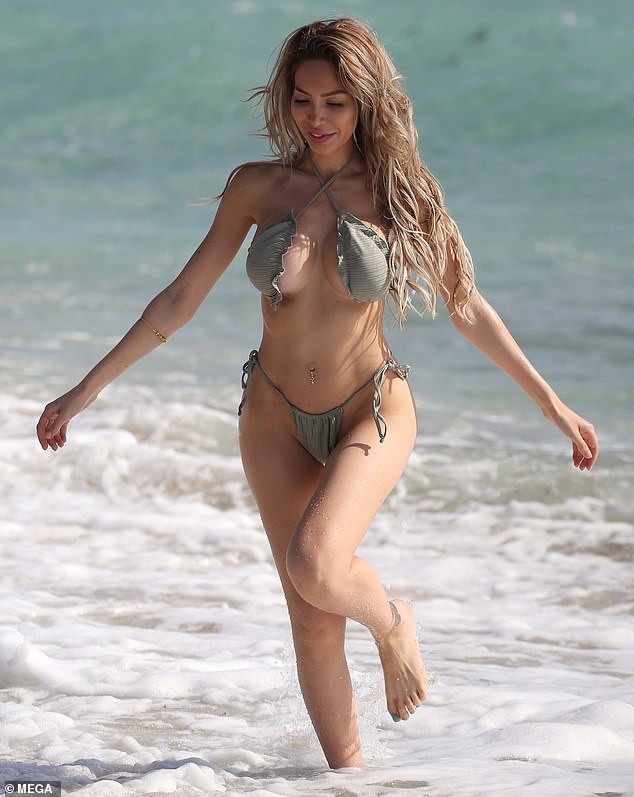 Showing it off: The reality television personality showed off her beach body in a revealing gray-green bikini while enjoying the coastal weather 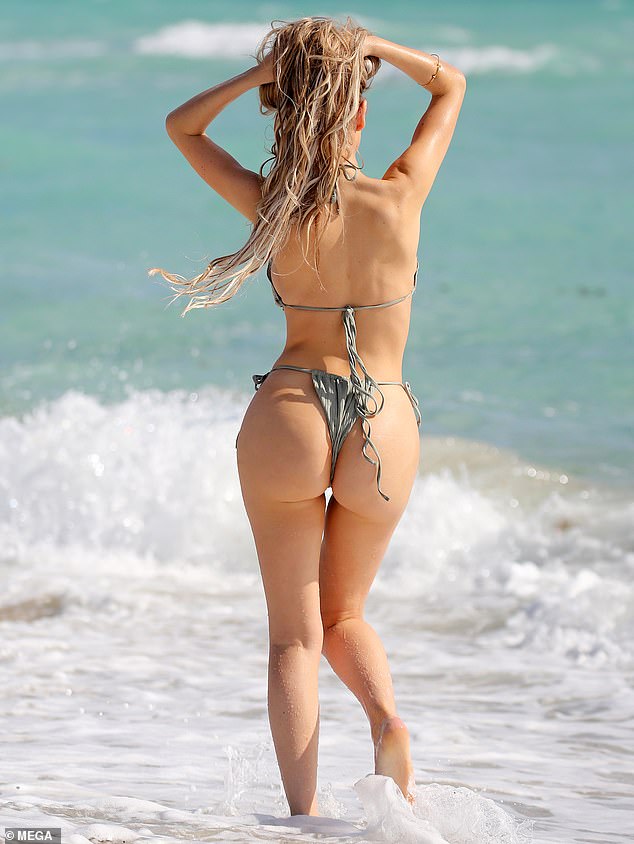 Letting it flow: The former Teen Mom cast member’s dyed blonde hair was on full view as she played in the cool ocean water

The former MTV star’s beach trip occurred a day after she attended a fundraising event at Donald Trump’s Mar-a-Lago resort that featured little to no social distancing from its attendees.

The reality television star posted a video to her Instagram account on Sunday morning to share her memories from Friday’s fundraiser; she also took her daughter Sophia, aged 12, along with her to the event.

Abraham was first seen walking into the resort with her daughter and one of their dogs, and she remarked that they were ‘excited’ for the fundraiser to begin.

She was then seen in the middle of a large crowd that had gathered to take a video of the former president, who notably wore a hat bearing the Make America Great Again slogan.

During the event, the businessman notably hinted that his daughter-in-law, Lara Trump, would soon run for political office. 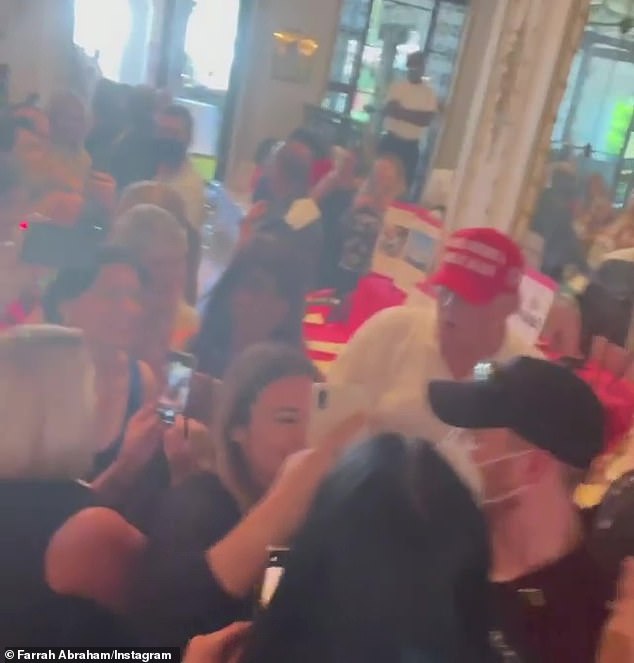 Not taking precautions: On Friday, Abraham attended a fundraiser at Donald Trump’s Mar-a-Lago resort; none of the attendees were seen following social distancing protocols during the event

Although many of the guests were seen wearing facial coverings, social distancing protocols were not being followed.

The television personality was then escorted to her table, where she caught a quick video of her pooch eating off her plate.

Abraham also wrote a long message in the post’s caption to express her views about the event.

She began her message by thanking ‘the leaders, talents, military, security, sponsors & more who truly showed care for many eye opening sectors that are breaking cycles of systemic injustices and saving lives.’ 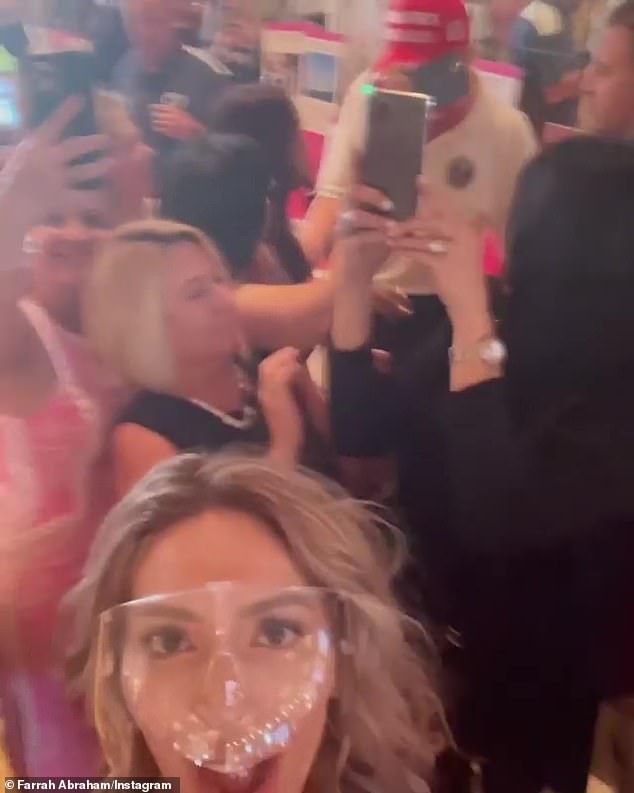 Getting a flick: The reality television personality took a video where she caught a glimpse of the former president, who hinted that his daughter-in-law Lara would be running for political office in the near future

The former Ex On The Beach cast member noted that the event, which took place just after International Women’s Day, was an inspiration to her child.

‘Showing this to my daughter meant the world; Woman remember men who lift them up, treat them equal, inspire their day, show support, and impact other men to treat women with equality,’ she said.

Abraham then wrote that she was ‘very proud of #donaldtrump president, author,global business man, granddad, and every other title he holds.’

The television personality concluded her message by writing that the fundraiser had ‘brightened our year as we all get back to enhancing our lives and others moving past Covid restrictions.’ 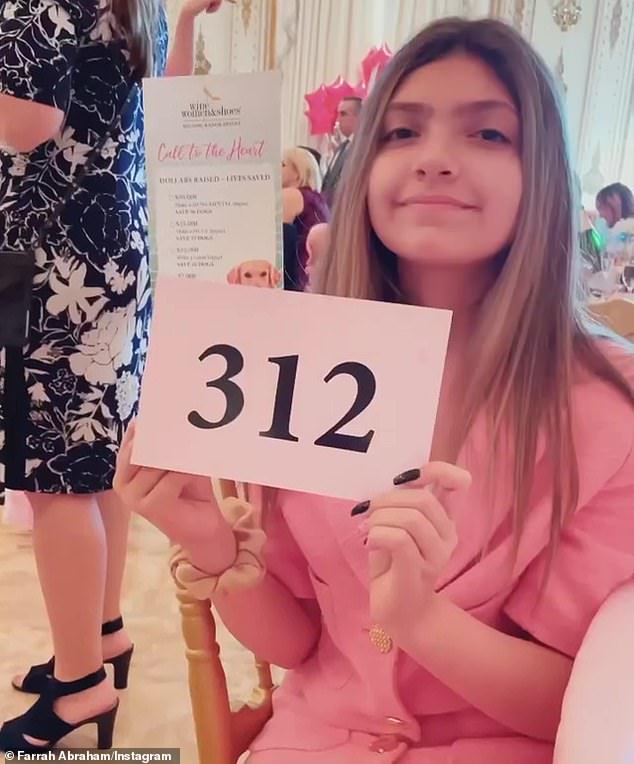 Happy mom: In her post’s caption, the musician wrote that taking her daughter Sophia to the event, which took place just after International Women’s Day, ‘meant the world’ to her 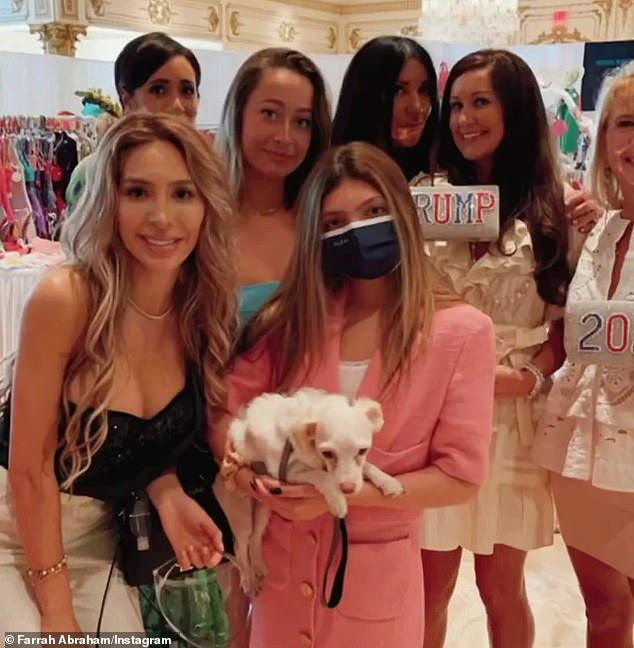 Making it known: Abraham also wrote that she was ‘very proud’ of the former president’s achievements and expressed that she was impressed with his various titles