The little boy, whose father is Travis Scott, was originally introduced to the world as Wolf, but the make-up maven later told fans she and her beau reneged on the moniker.

On Thursday’s episode of their reality show, four-year-old True is heard chatting to her mother Khloe shortly after she gave birth to a new baby boy via surrogate, with True referring to her baby brother as ‘Snowy’.

But as her mother corrects that Snowy is not the baby’s name, fans are now speculating that it could be the name of Kylie’s son – with True just getting her new brother and cousin confused. 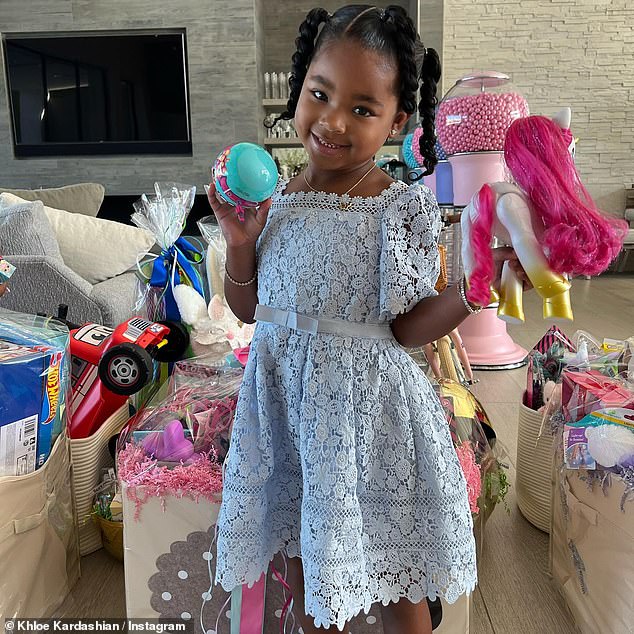 Did she spill the beans? Fans who watched the season two premiere of Hulu’s The Kardashians think Khloe Kardashian’s daughter True Thompson may have revealed the name of Kylie Jenner’s son

During a FaceTime call, True shouted ‘Hi, Snowy!’ to the newborn, before Khloe corrected her daughter: ‘His name is not Snowy.’

During the episode, Khloe joked that her son is ‘No Name Johnson’ since she’s yet to decide on her son’s moniker.

But the random ‘Snowy’ name drop has got fans thinking that True could have actually gotten her new baby brother confused with another new baby in the family – her auntie Kylie’s seven-month old son. 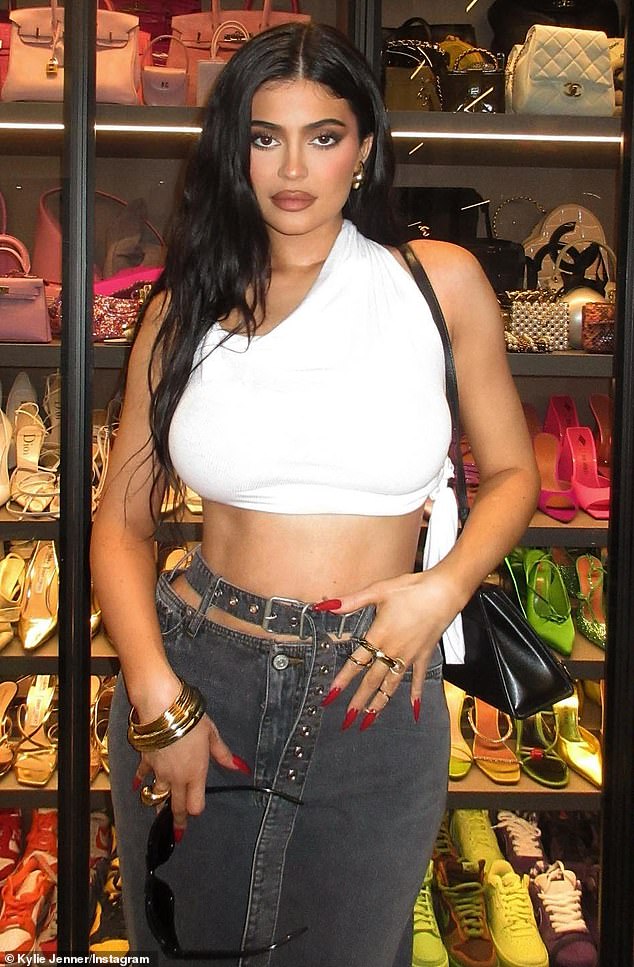 Switch-up: Kylie Jenner’s baby boy, whose father is Travis Scott, was originally introduced to the world as Wolf, but the makeup maven later told fans she and her beau reneged on the moniker

Viewers took to social media to speculate that True could’ve accidentally revealed her cousin’s name to the audience when meeting her new brother.

‘PLACE YOUR BETS!’ TikTok user Marissa Spagnoli wrote in a caption accompanied by a video explaining her theory.

She clarified in a comment, ‘She’s associating the baby brother thing to kylies baby since he was just born!’ with other fans agreeing with her.

Talking about her own newborn, Kylie said she was excited for him to have a ‘forever friend’ in Khloe’s son. 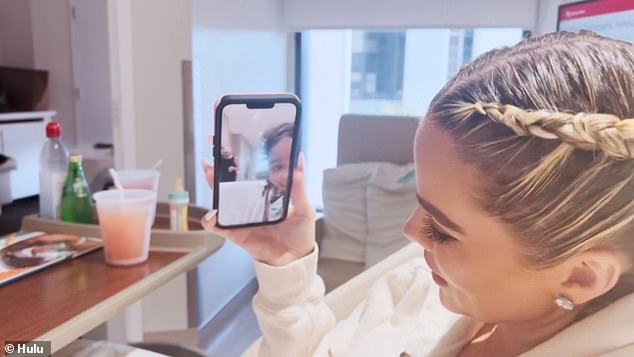 Speculation: On Thursday’s episode True, four, is heard referring to her baby brother as ‘Snowy’ shortly after his birth, but it may have been a mixup 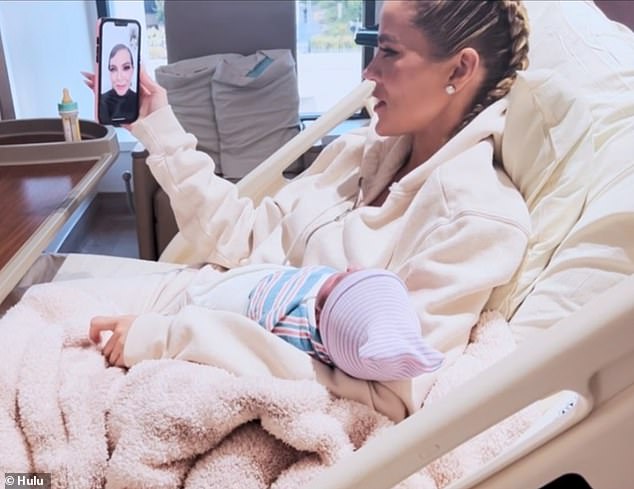 Introduction: Khloe showed her mom her new son via FaceTime in a segment from the new Kardashians episode

The beauty guru and beau Travis previously named their new son Wolfie, before backstracking and changing their mind.

Earlier this month, while on The Late Late Show, Kylie Jenner told host James Corden her son still doesn’t have a name.

She explained that the seven-month-old is legally still Wolf Webster: ‘His name is still Wolf, his passport is Wolf, but that isn’t gonna be his name. We’re just waiting and simmering. We don’t call him Wolf,’ she said.

The 25-year-old said she and her rapper boyfriend are ‘waiting and simmering’ and have narrowed down options. 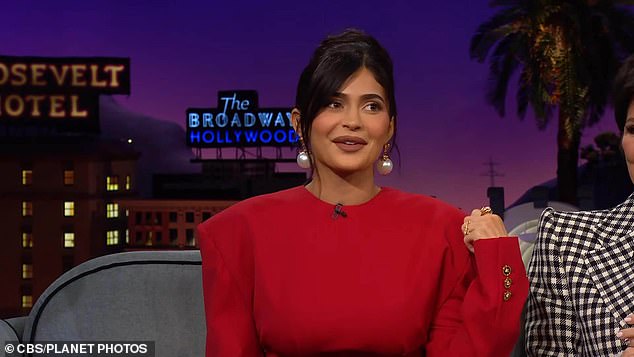 It seems the hold up is Travis, 31, who comes up with ‘cool’ name ideas but continuously changes his mind.

When the late-night host asked whether the name is still animal-themed, the reality star replied, ‘No.’

In addition to their son, the couple shares daughter Stormi Webster, four.

Back in April, her elder sister Kim told Live with Kelly and Ryan: ‘There’s one name lingering but she really wants to make sure.’ 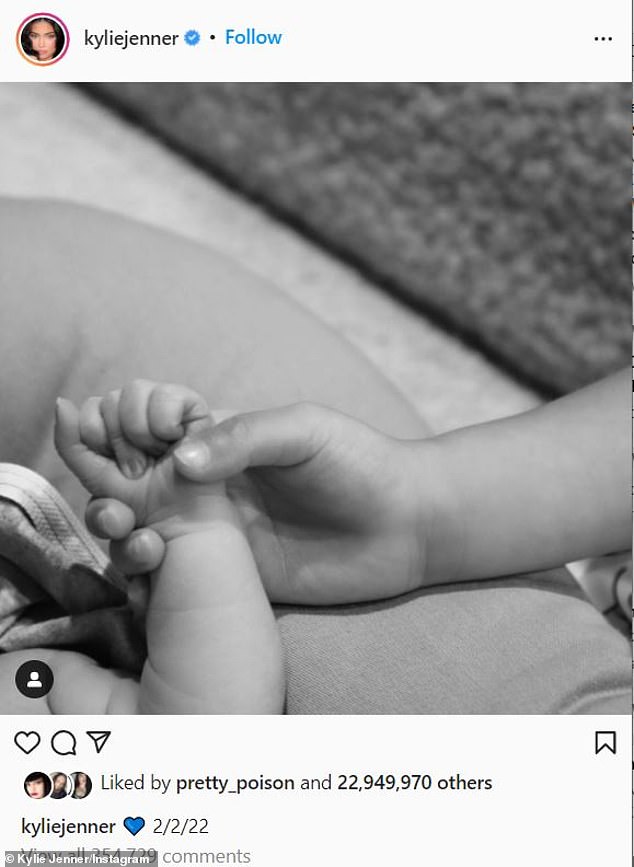 Mysterious: ‘His name is still Wolf, his passport is Wolf, but that isn’t gonna be his name. We’re just waiting and simmering. We don’t call him Wolf,’ Kylie said about her son