EXCLUSIVE: Molly-Mae Hague wows in nude mini dress as she launches new PrettyLittleThing collection and hits back at ‘unanswered questions’ about her Creative Director role

Molly-Mae Hague stars in a new glam shoot for PrettyLittleThing.

The creative director of the brand shows off her modelling skills for the London-set shoot, which sees her don a racy nude mini dress and sporty crop tops.

The shoot celebrates a new collection from the brand and Molly-Mae, who is coming into the final months of her year-long Creative Director contract. a title with a seven-figure salary. 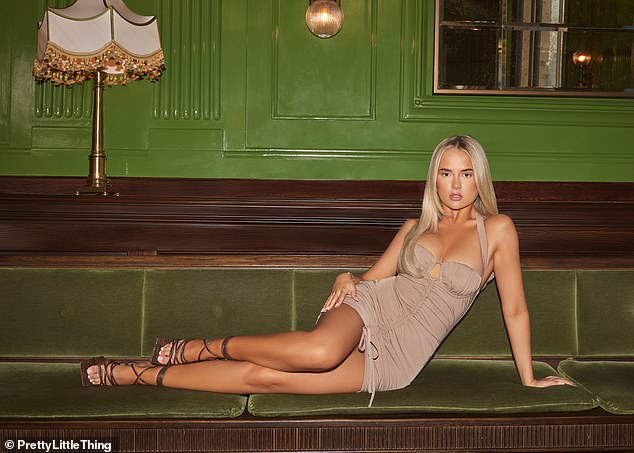 Coming soon: Molly-Mae Hague wows in a new glam shoot for PrettyLittleThing. The creative director of the brand shows off her modelling skills for the London-set shoot

The new photos show the Love Island star, 22,  posing in a chic bar, reclining on a velvet banquette in a stunning nude mini dress.

The dress shows off the blonde’s incredible figure with its plunging neckline and high hemline.

Another shot shows Molly-Mae outside a London telephone booth, this time in a tiny blue crop top layered under a baby blue shirt and nude waistcoat and shorts. 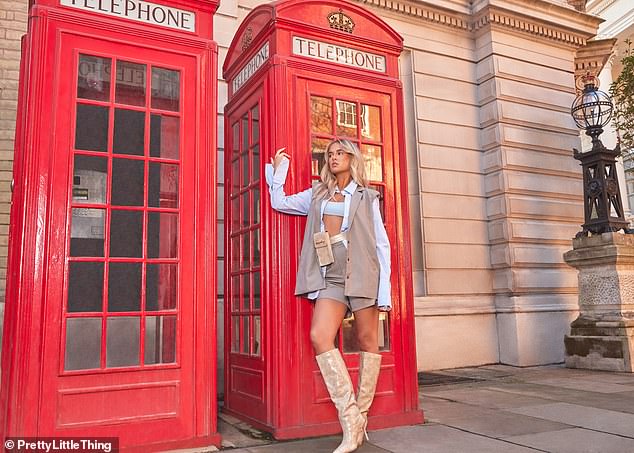 Looking fab: The shoot celebrates both a new collection and a fresh initiative from the fast fashion brand to improve its sustainability 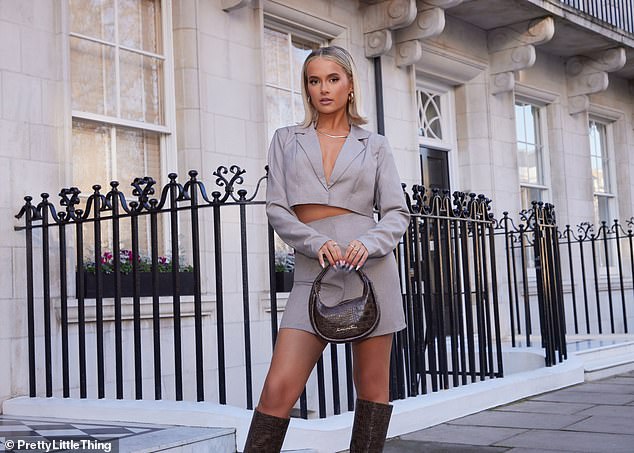 Style queen: Molly models her new collection in the images, with the garments to be revealed with a fashion show in central London on Wednesday night

Molly models her new collection in the images, with the garments to be revealed with a fashion show in central London on Wednesday night.

‘It’s really different,’ the star said of her new line. ‘It looks very high-end and I think we want to give our customer the opportunity to shop those looks — that London city girl wardrobe — on a budget, because obviously, our customer has a budget,’ she added.

Molly-Mae’s contract as EU Creative Director with PrettyLittleThing will expire in August, but the star doesn’t see ‘why it won’t continue.’

‘This fashion show is going to show everyone what we’re doing in my role, which I’m really excited about. There’s been a lot of unanswered questions, and this catwalk will display exactly what I’ve been doing the last six months because it’s taken that long to plan it,’ she said. 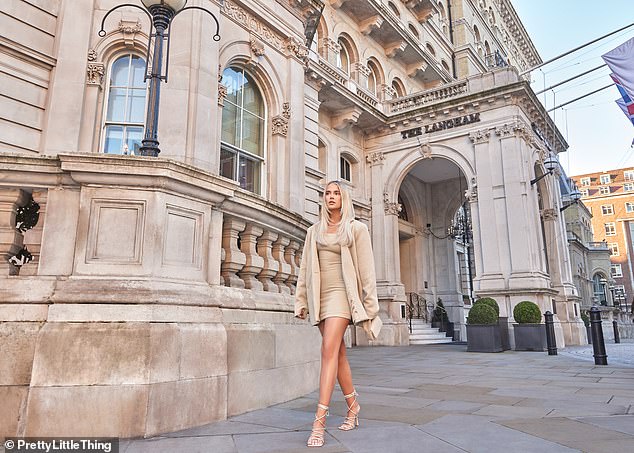 Selling off her wardrobe: The new shoot also coincides with a fresh direction for the brand, which is venturing into secondhand trading 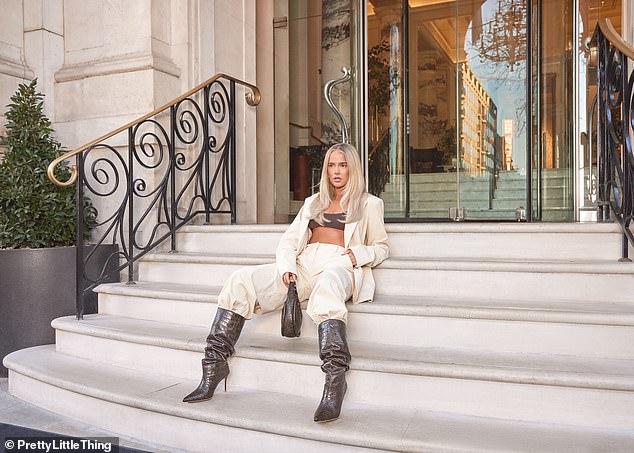 Working hard: Molly-Mae’s contract as EU Creative Director with PrettyLittleThing will expire in August, but the star doesn’t see ‘why it won’t continue’

The new shoot also coincides with a fresh direction for the brand, which is venturing into secondhand trading with the launch of an online marketplace that allows users to sell used items from PrettyLittleThing and elsewhere later this year, with proceeds going to charity.

Molly-Mae revealed her excitement at the plan in an interview with WWD.

‘There is so much in my wardrobe at home that I don’t wear anymore. Stuff that people can’t get hold of. I still get messages saying ‘I’m desperate for this blazer.’ People now will have the second opportunity to shop for those things that they can’t get anymore,’ she added. 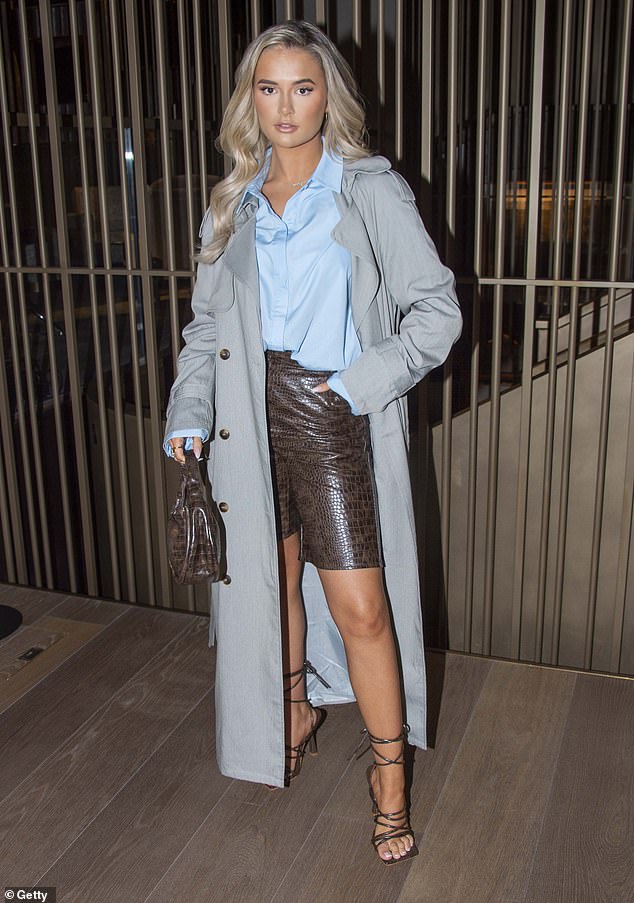 Wow! Molly-Mae flashed her bronzed legs in a brown snakeskin shorts and an oversized blue shirt at the PrettyLittleThing fashion show in London on Tuesday 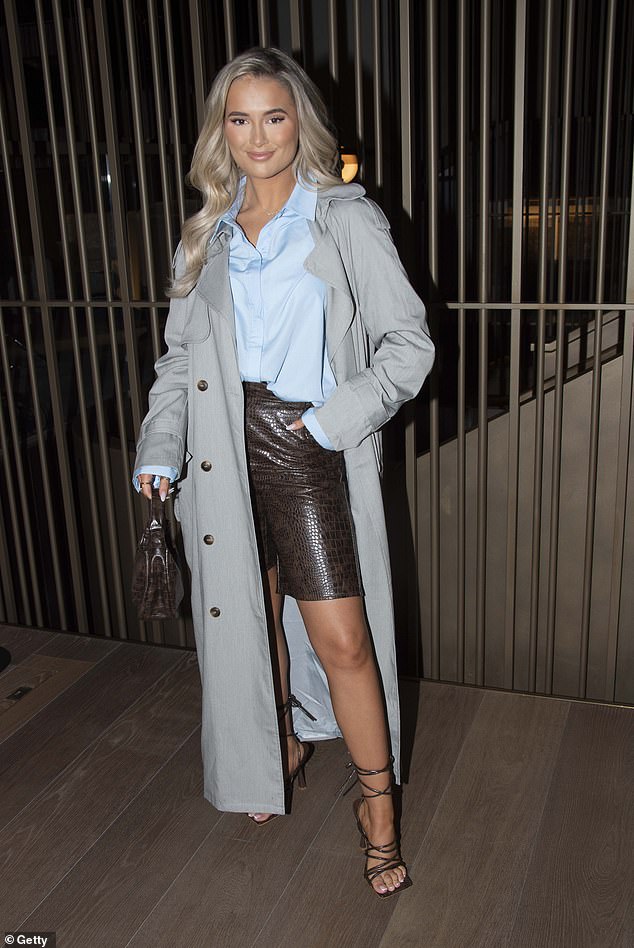 Hot stuff: She continued her ensemble with an oversized baby blue shirt

The launch follows accusations of poor labor practices and lack of health and safety regulations, with both PrettyLittleThing and its parent company Boohoo Group are taking their steps toward transparency and more sustainable and ethical production.

Her new fashion ventures follows Molly-Mae’s announcement last week that she has written an autobiography, despite being only 22 years old.

She took to Instagram on Thursday and revealed the book, priced at £20, is called ‘Becoming Molly-Mae: My Story’.

Fashion forward: She layered the number beneath a grey trench coat while elevating her height with black lace-up heels 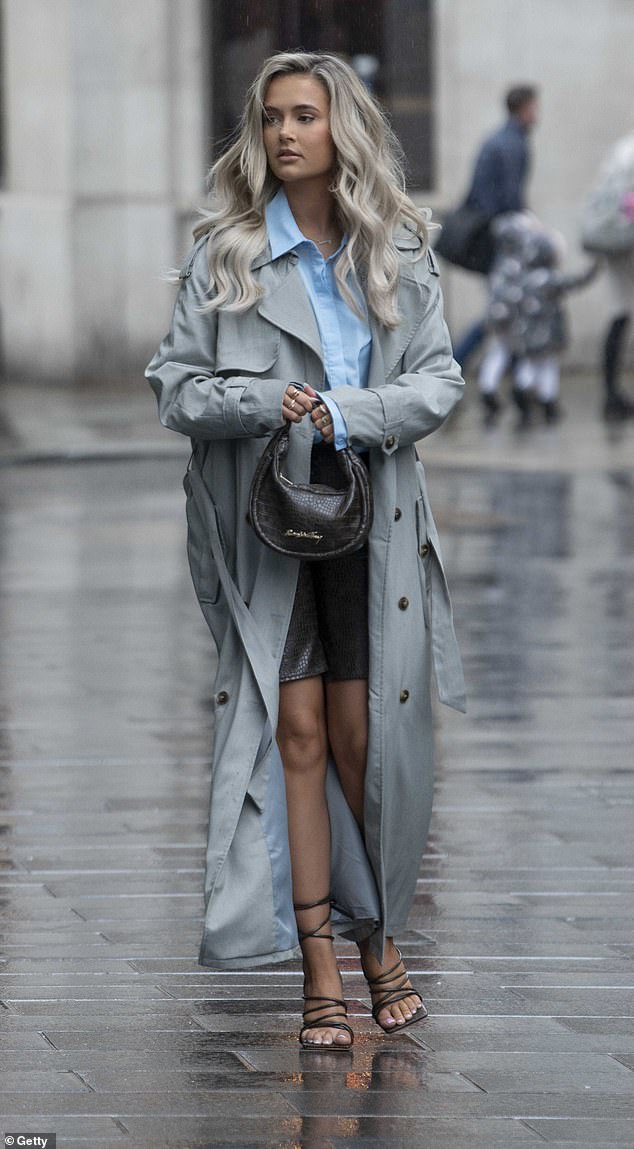 In a video message, Molly-Mae said she takes oversharing ‘to a new extreme’ in the book which features stories she has previously only told to close friends.

She said: ‘I have been keeping a huge project, a little secret, from you guys for well over a year now…and today is finally the day that I can finally speak about what it is…

‘I can’t believe I am about to show this to you guys…so I have written my very own book. This is Becoming Molly-Mae, my first ever book.’

She continued: ‘And it is literally, this is my baby, we have honestly put so many months of work into this book you have no idea and it’s been such a journey and such an adventure, venturing into this whole new world of writing a book, it is something that I have always, always wanted to do.’

Gorgeous: Molly-Mae looked sensational as she turned the streets of the capital into her very own fashion show