It was revealed earlier this week that Ed Sheeran’s wife Cherry Seaborn is pregnant with their first child and is set to give birth in a matter of weeks.

And it has now been suggested that the mother-to-be has requested an unlimited sabbatical from work to focus on raising their baby as well as other projects.

Cherry, 27, has been working in a high-powered role as a risk manager for international firm Deloitte for six years, in both their London and New York offices. 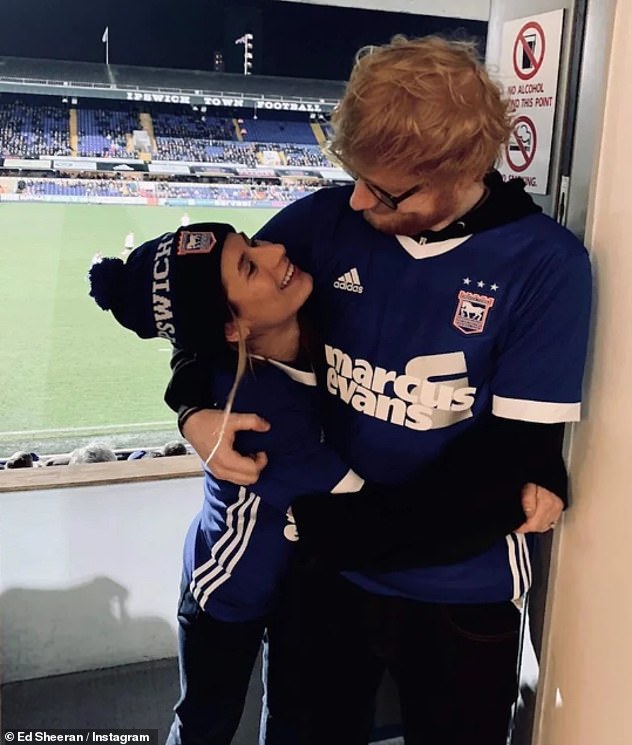 Baby news on the way? Ed Sheeran and his wife of two years Cherry Seaborn are reportedly expecting their first child together

A source told the Sun that Cherry has been given a limitless amount of time off so that their newborn can be the couple’s primary focus.

They said: ‘Cherry spent last year writing a monster paper for the firm on technology and digital risk.

‘She told bosses at the firm last summer that she planned to take extended leave at the beginning of 2020.

‘They’ve given their blessing for her to have unlimited time off and pursue other projects alongside becoming a mum.’ 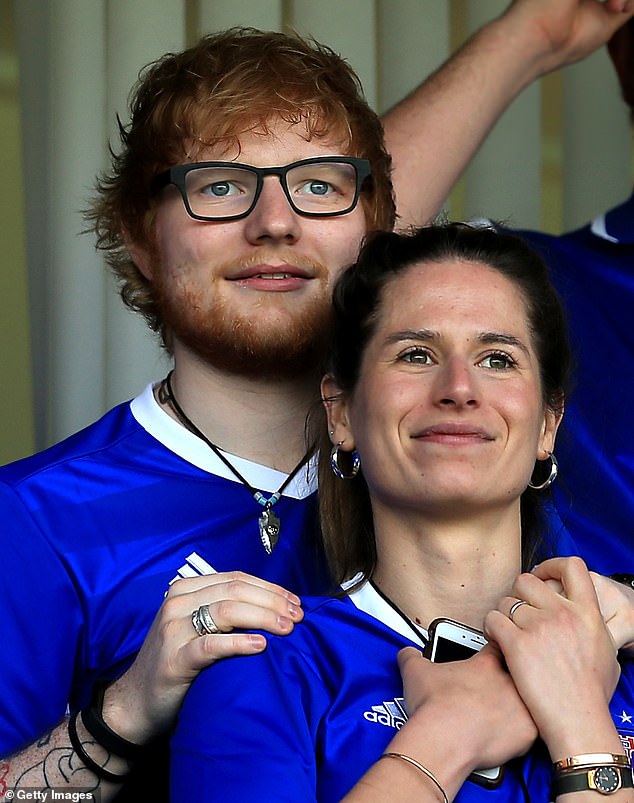 Low-key: The chart-topping singer, 29, and Cherry, 27, who first met at school, are said to have kept her pregnancy quiet during the global COVID-19 lockdown. Pictured in 2018

However Cherry reportedly has no long-term plans to be a stay-at-home mum, and is believed to have enrolled at Cambridge University to study for a post-graduate degree in sustainable business.

The couple are both passionate about sustainable living and boast free range chickens, beehives and vegetable homes at their Suffolk pad.

‘Cherry now has an increased focus on risk management, for a wide range of organisations, in the rapidly changing digital world.

‘As part of Deloitte’s global common storefront initiative for ‘Technology and Digital Risk’ Cherry works closely with our leaders around the world, and is the co-author of Deloitte’s 2019 Digital Risk Survey.’

A source close to Ed also told The Sun: ‘Ed and Cherry have spoken about having kids for some time and their intention was to try during his break from music.

‘Ed didn’t want to be halfway around the world, jetting around on private planes, when Cherry was expecting.

‘He wanted to be right next to her every step of the way and it’s just worked out so perfectly for them.’

She has also enrolled at Cambridge University to study for a post-graduate degree in sustainable business.

It was revealed on Tuesday that Ed and his wife of two years Cherry are expecting their first child together.

The chart-topping singer and Cherry, who first met at school, are said to be weeks away from becoming parents, after keeping her pregnancy quiet during the global COVID-19 lockdown. 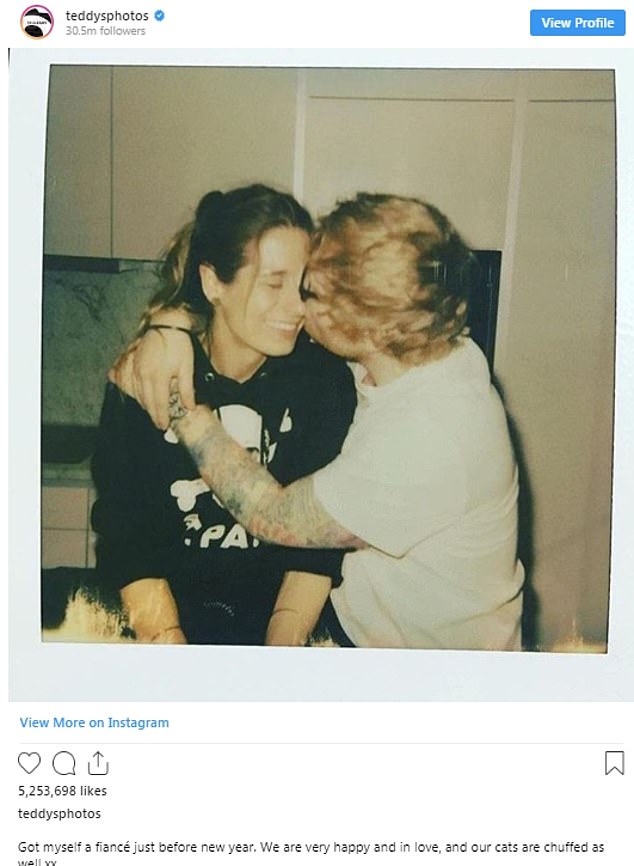 Popped the question: Ed announced his engagement to Cherry, 26, in January 2018 with a candid Instagram snap

The couple are ‘over the moon’ at the prospect of becoming parents and are making the ‘last preparations’ at home before welcoming their baby into the world.

A source told The Sun: ‘Ed and Cherry are over the moon. They’re very excited, but have kept things very low key.

‘Lockdown was a perfect excuse not to be seen out and about too much, but things are getting closer and the excitement has been building so they have started telling friends and family.

‘They’re just making the last of the preparations at home, and the baby is expected later this summer. It’s a really happy time and their families are all totally delighted for them and cannot wait to meet the new arrival.’

The news comes after Ed announced at the end of last year that he was taking an extended break from his career to focus on travelling and his personal life.

Childhood friends: Ed and Cherry first met as children when they both attended Thomas Mills High School in Framlingham, Suffolk. Pictured in June 2019

The couple have been together for five years, with Ed confirming last summer that he and Cherry tied the knot in a private ceremony in January 2019.

Singer Ed first revealed Cherry was his wife in an interview with Charlamagne The God to promote his album No.6 Collaborations Project.

After Charlamagne The God asked about lyrics on the album which refer to the singer’s ‘wife’, Ed admitted that he wrote the words before the couple tied the knot, but he ‘knew that we’d be married’ by the point that the song came out.

The Grammy winner and Cherry wed in a ceremony that saw just 40 close friends and family in attendance, according to a report in The Sun.

Said a source: ‘Neither of them were that fussed about making a big deal about it. Cherry just wanted to get it out of the way without any problems or intrusions.’

Ed announced his engagement to Cherry in January 2018 with a candid Instagram snap, gushing to fans: ‘Got myself a fiancée just before new year. We are very happy and in love, and our cats are chuffed as well xx’

The couple are thought to have started dating in 2015, with Ed’s best pal Taylor Swift sharing a photo of the pair kissing on her Instagram account.

Ed and Cherry first met as children when they both attended Thomas Mills High School in Framlingham, Suffolk.

But Cherry moved to the US for university, meaning the friends lost touch. After working on Wall Street, she moved back to the UK in 2016 to be with Ed. 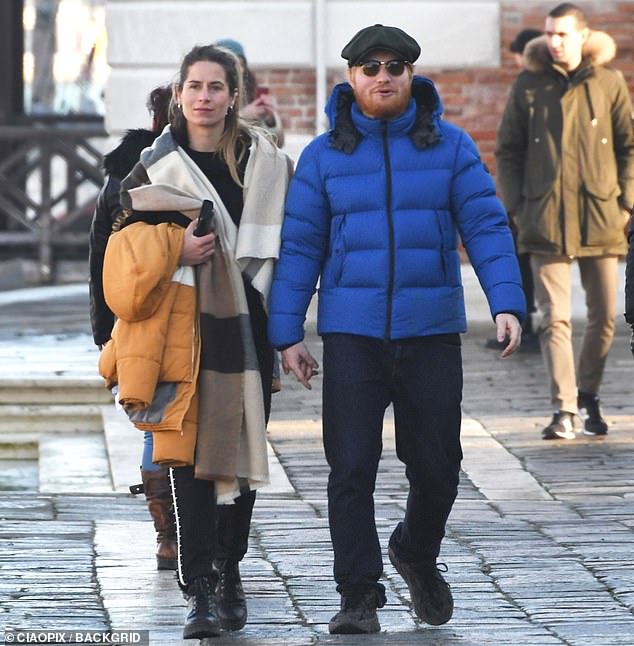 Transatlantic: Cherry moved to the US for university, meaning the friends lost touch. After working on Wall Street, she moved back to the UK in 2016 to be with Ed

During his candid 2019 interview with Charlamagne The God, Ed spoke about the sacrifices he would be willing to make for Cherry and their future family.

Ed explained that Cherry’s job as a risk assessor at an accounting firm meant they’ve previously been separated for long period when he’s been on tour, explaining that ‘something has to give’ in order for the couple to last long term.

‘I’m starting a life with Cherry,’ he said, adding: ‘I can’t spend the next 20 years on the road. Kids would be the different thing. I wouldn’t mind sacrificing for them.

‘If someone told me you can’t tour again for the next ten years if you have kids that is fine, because that is what I have signed up for.’

Wedded bliss: As they danced words appeared on the bottom of the screen giving a brief description of their love, at the same time confirming the month in which they tied the knot

‘I’ve already achieved more than I thought I would, so now I’m just trying to have fun.’

He added of his wife that he feels lucky every day that ‘she has chosen me’, gushing:  ‘I constantly wake up every day and look at Cherry and think, ‘why the f*** are you with me?’ She could be with anyone she wants to but she has chosen me.

‘And I am saying all of the things that are wrong with me and you still want to be with me. She doesn’t add fuel to the flames.

‘If she said, ‘Yeah, why am I with you?’ then you would get anxiety. But I think it’s sweet to think the person you’re with is out of your league. Imagine if you thought, you’re with me because I’m f***ing amazing. That would be the worst thing, just to take it for granted.’

Ed, who has enjoyed periods of time away from the spotlight in the past, is said to have embraced the quiet life during lockdown with Cherry at their sprawling Suffolk estate, taking up gardening and growing his own fruit and vegetables. 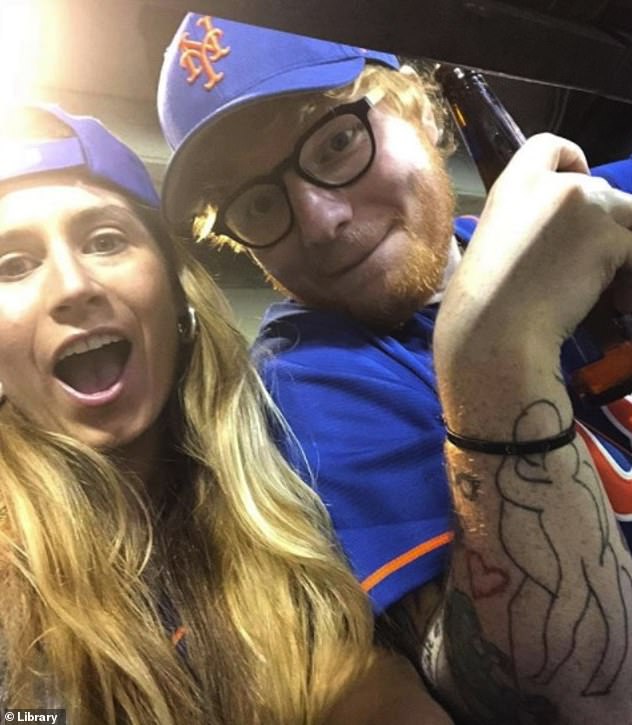 Committed: ‘I’m starting a life with Cherry,’ he said in a 2019 interview. ‘I can’t spend the next 20 years on the road. Kids would be the different thing. I wouldn’t mind sacrificing for them’

It was reported recently that the fiercely private star intends to buy out the owners of three houses that sit on the edge of his £3.7million Suffolk estate because their gardens encroach on his land.

The singer who owns a total of 27 properties both within and outside London worth £57million, has slowly been accumulating the land around his home in Suffolk, turning it into what has become known as ‘Sheeranville’.

Worth around £200million, Ed owns five of the properties on the land, but the homeowners [of the remaining three houses] know that Ed will give them the best price if and when they decide to move on.

Ed has been building and adding onto his estate for the last five years, and now has a pub, swimming pool and hot tub, orchard, walled kitchen garden, greenhouses, an underground cinema, a gym, a recording studio, a wildlife pond and an area for goats, sheep and chickens. 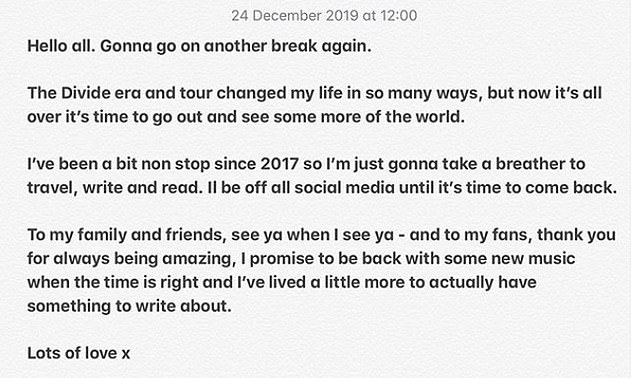 Break: Ed announced at the end of last year that he was taking an extended break from his career to focus on travelling and his personal life