The character was killed off in true soap style as he attempted to save ex-wife Linda’s (Kellie Bright) life after she and Janine Butcher (Charlie Brooks) drove off a cliff and into the English Channel.

His heroic act came after Mick learned the truth about wife Janine’s framing of Linda and confessed his love for the latter, before dramatically exiting the show in a nail-biting finale which saw him lost at sea.

And recently sharing some behind-the-scenes info on filming, Danny admitted that the dramatic scenes were actually filmed ‘in a tank of vegetable juice’. 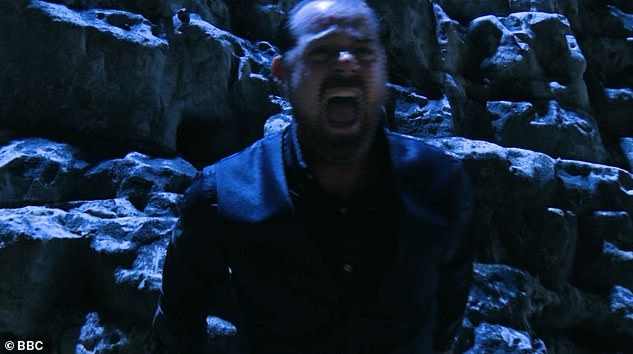 Mick’s death came as he, Janine and Linda all came head-to-head in an explosive finale at the White Cliffs Of Dover – after learning that Janine was responsible for the car crash that Linda took the blame for in previous episodes.

In a dramatic car chase, Janine attempted to escape her husband and his ex-wife as they tried to make her pay for her crimes, driving quickly away towards Dover.

But not letting her get away, Linda jumped into the passenger seat and wrestled with Janine for the steering wheel – leading to them losing control of the car and rearing off the side of a cliff, into the English Channel.

Following behind was Mick, who got out of his car and made a jump into the water to rescue them after realising what had happened.

Drama: The character was killed off in true soap style as he attempted to save ex-wife Linda’s (Kellie Bright) life after she and Janine Butcher (Charlie Brooks) drove off a cliff and into the English Channel

Conflict: Mick’s death came as he, Janine and Linda all came head-to-head in an explosive finale at the White Cliffs Of Dover – after learning that Janine was responsible for the car crash that Linda took the blame for in previous episodes

The duo were submerged in water and trapped in Janine’s car, before Mick managed to rescue Janine and take her back to land, before jumping back in for Linda.

But unbeknownst to Mick, Linda was already out of the water and had made her way to land, leaving a struggling Mick nowhere to be seen in the water.

Speaking on the filming process of the scenes, Danny recently told The Sun that to mirror the water, he was submerged in vegetable juice. 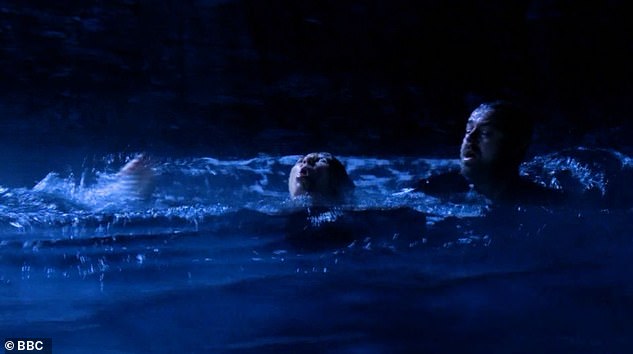 Rescue: As Janine and Linda were stuck underneath the water, Mick managed to rescue Janine and take her back to land, before jumping back in for Linda 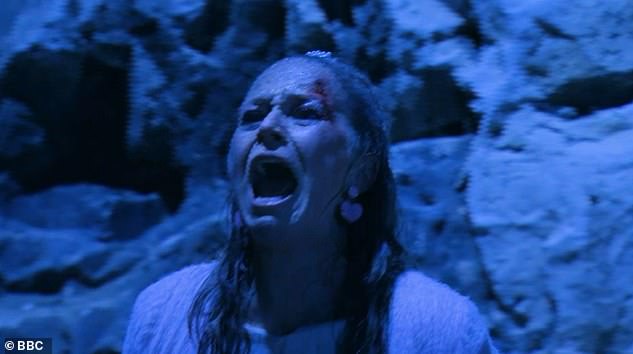 Heartbroken: But as he jumped back in, Linda was revealed to be safe and sound on land too – leaving Mick nowhere to be seen and lost at sea, with Linda calling out for him

My last scene, I was smothered in broccoli. The water tank, they fill it with broccoli juice to make it green. It is like a bath temperature. I was very tearful and I was all emotional — but I smelt like broccoli. It softened the blow,’ he shared.

The drama began earlier in the episode when the trio were all at Christmas dinner together and Janine was outed by her daughter, Scarlett.

Linda’s life was left hanging in the balance earlier in the summer, following her involvement in a dramatic car crash with Janine.

Truth revealed: The drama began earlier in the episode when the trio were all at Christmas dinner together and Janine was outed by her daughter, Scarlett, who revealed that she had framed Mick’s ex-wife Linda earlier in the year 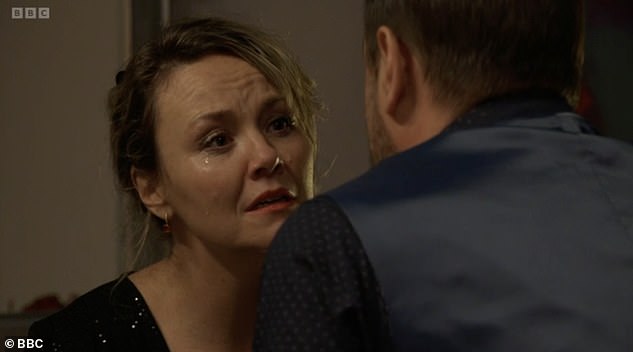 It’s over! After learning the truth, Mick was furious at Janine and ended their relationship

The most DRAMATIC EastEnders exits of all time: As Walford legend Danny Dyer is set to bow out of the soap on Christmas Day, here are some of the best moments which saw characters leave Albert Square with a bang

With the news of Danny Dyer’s explosive exit from EastEnders on the Christmas special episode on December 25th, it is only right to look back on some of the best and most dramatic ways a character has left the show. 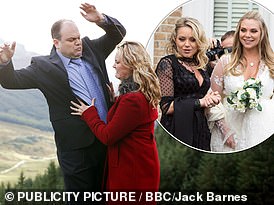 She was lead to believe that it was her fault and she was driving the car under the influence, despite the fact that it was actually Janine’s, who had moved her into the driving seat.

And during the festive dinner, Scarlett outed her mum as the culprit, saying to Linda: ‘She was driving your car when it crashed. She came to pick you up. Linda, you called the vic and talked to mum’.

While Janine attempted to brush off the truth by claiming her daughter ‘isn’t well’, but couldn’t keep up with her own lies.

Beginning to piece things together, Mick demanded to know whether Janine was in the car with Linda when she crashed – before discovering that she was, in fact, the one driving.

Turning to Janine, Linda questioned: ‘Did you move me? When they found me, I was in the drivers seat. She must’ve put me there to make it look like it was me.

She then leaped at Janine in attack as things took a violent turn, leaving Mick in shock as he processed the situation.

After the dramatic meal, Mick chatted with Linda in private and confessed his love for her despite being married to Janine.

Turning to his ex-wife, he admitted: ‘It’s you, it’s always been you. i’ve known it all along, I just couldn’tface it. Every single day I have tried to convince myself that I loved Janine but it’s you. I’ve loved you all along. And now i’m married to her, please forgive me.’

Over the moon with the news, Linda replied: ‘Of course I forgive you, this is not your fault, I love you.

Mick asked if he and Linda could try things again, with the latter replying: ‘Yes, that’s all I ever wanted, you’re the love of my life, No one else has ever come close, no one.’

Sharing a kiss, the pair then agreed: ‘We’re never gonna be apart again’. 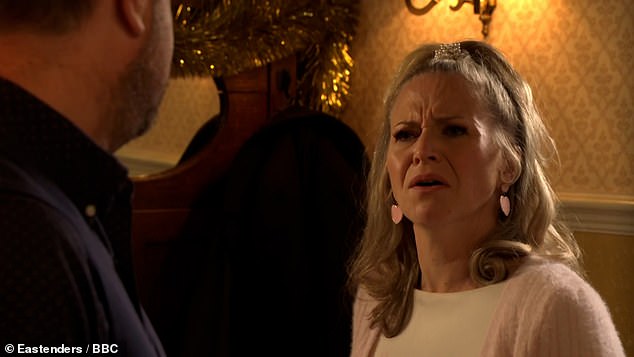 Back on: After the dramatic meal, Mick chatted with Linda in private and confessed his love for her despite being married to Janine 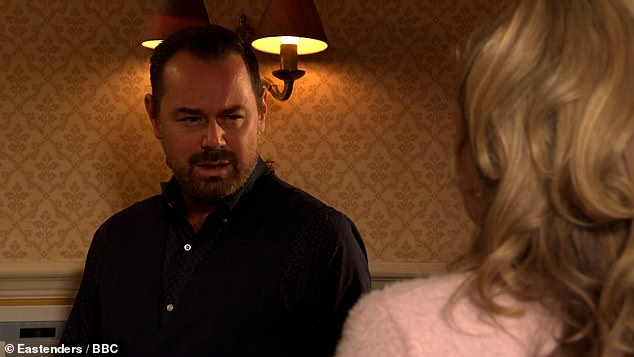 The one: Mick asked if he and Linda could try things again, with the latter replying: ‘Yes, that’s all I ever wanted, you’re the love of my life, No one else has ever come close, no one’

Going back to reality from the sweet moment, it was time for Mick to tell Janine that their marriage was over as he decided to make her pay for her actions.

Heading into their bedroom, Mick said to Janine: ‘You lied to me. to me, your husband. You honestly think i want to be with you now? I was gonna give up everything for you and for what? I don’t love you, I never loved you, i want you out of my sight. You disgust me.’

Throwing a travel bag at her, the landlord insisted that she pack her things as Linda  called the police, with Mick telling Janine: ‘You’re going to prison, do you understand me? You’ve made your bed, and now you’re gonna lie in it.’

Car chase: But things took a turn when Janine then took off with her passport to escape, as Mick and Linda set off to chase her 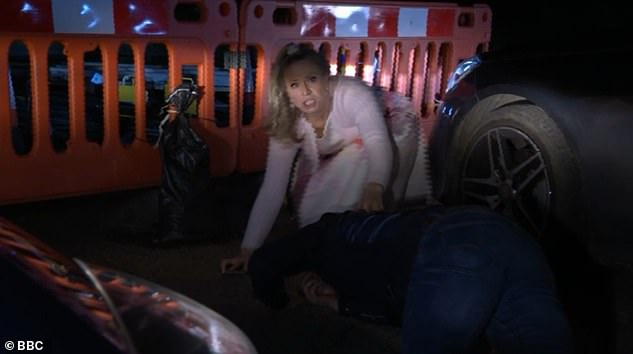 Intense: Janine attempted to escape Mick and Linda, who were hoping to send her to prison for framing the latter

But things took a turn when Janine then took off with her passport to escape, as Mick and Linda set off to chase her.

Driving on a narrow road alongside Janine, Mick attempted to convince her to pull the car over before both cars came to a stop at a dead end.

‘It’s over, get out of the car,’ he told his wife as Linda called the police from the remote location.

Janine punched Mick in the head as he fell to the ground before she got into her car and drove away, with Linda jumping into the passenger seat to try and stop her.

Intense: Following a framatic car chase which saw Janine attempt to flee, Linda jumped into her car to attempt to stop her – grappling the steering wheel 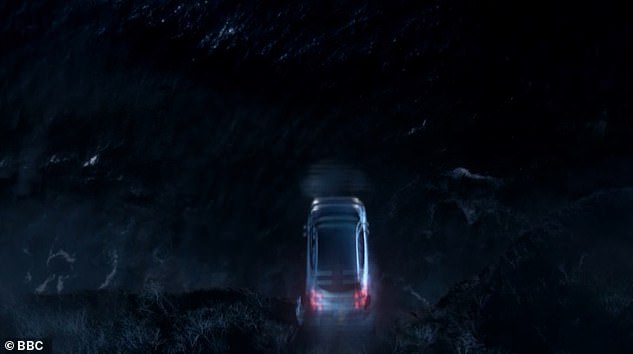 Out of control: Losing control of the vehicle, the pair drove off of the cliff and went under the water – completely submerged

The pair wrestled over the steering wheel as Janine attempted to drive away, losing control of the car as the whole vehicle falls off of the cliff’s edge and into the sea.

Underneath the water, Janine and Linda were then jammed in the car and submerged in water as they battled to get out – before Mick discovered that they had fallen in and jumps out to save them.

Diving down, he manages to open the car and get Janine out of the car, saving her as he swims up and brings her onto land.

But going back to look for Linda, a struggling Mick jumps back in to save her – without knowing that she has already managed to make her way out of the water alone.

Linda joins Janine back on land and searches for Mick, screaming for him before breaking into fits of tears as he is nowhere to be seen.

Actor Danny announced that he would be stepping down from his role as Mick Carter back in January after joining the show in 2013.

And the exit certainly lived up to bosses’ hints , which previously teased that the exit would be ‘explosive’. 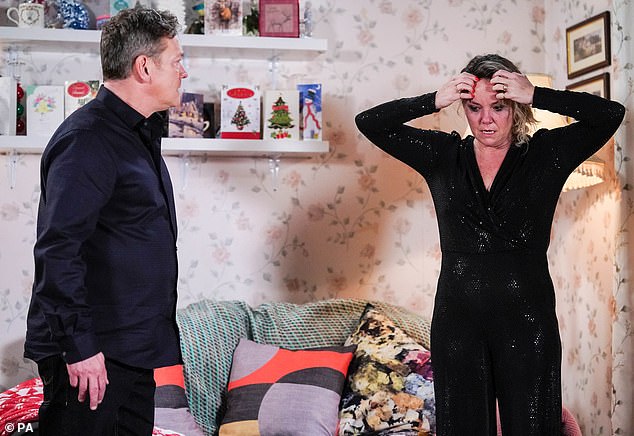 Stressed: Janine was left in bits after everyone learned the truth about her framing of Linda, with Ricky (Sid Owen) attempting to calm her down 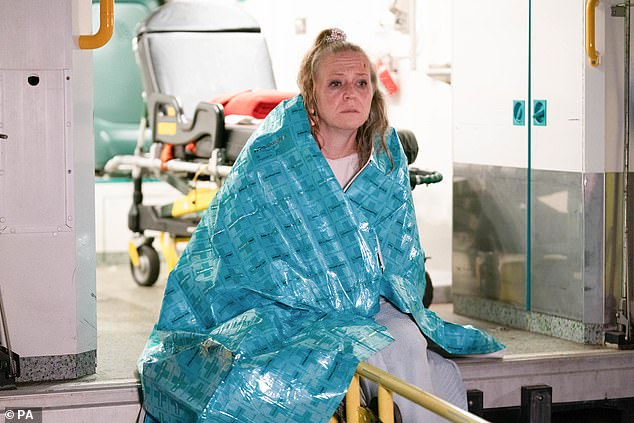 All OK: Linda managed to come out of the water unharmed after making her way back to land – with Mick looking for her in the Channel