Dennis Quaid, 65, cosies up to bikini-clad new girlfriend Laura Savoie, 26, before the pair share a passionate kiss over dinner in Lake Como

He has sparked up a new romance with a PHD student 39 years his junior.

And Dennis Quaid looked happy to be in the first throes of romance once more as he packed on the PDA with new girlfriend Laura Savoie in Lake Como, Italy on Wednesday.

The Far From Heaven star, 65, was smitten as he held hands with his stunning bikini-clad girlfriend, 26 while they took in the scenic views at the prestigious Villa D’Este. 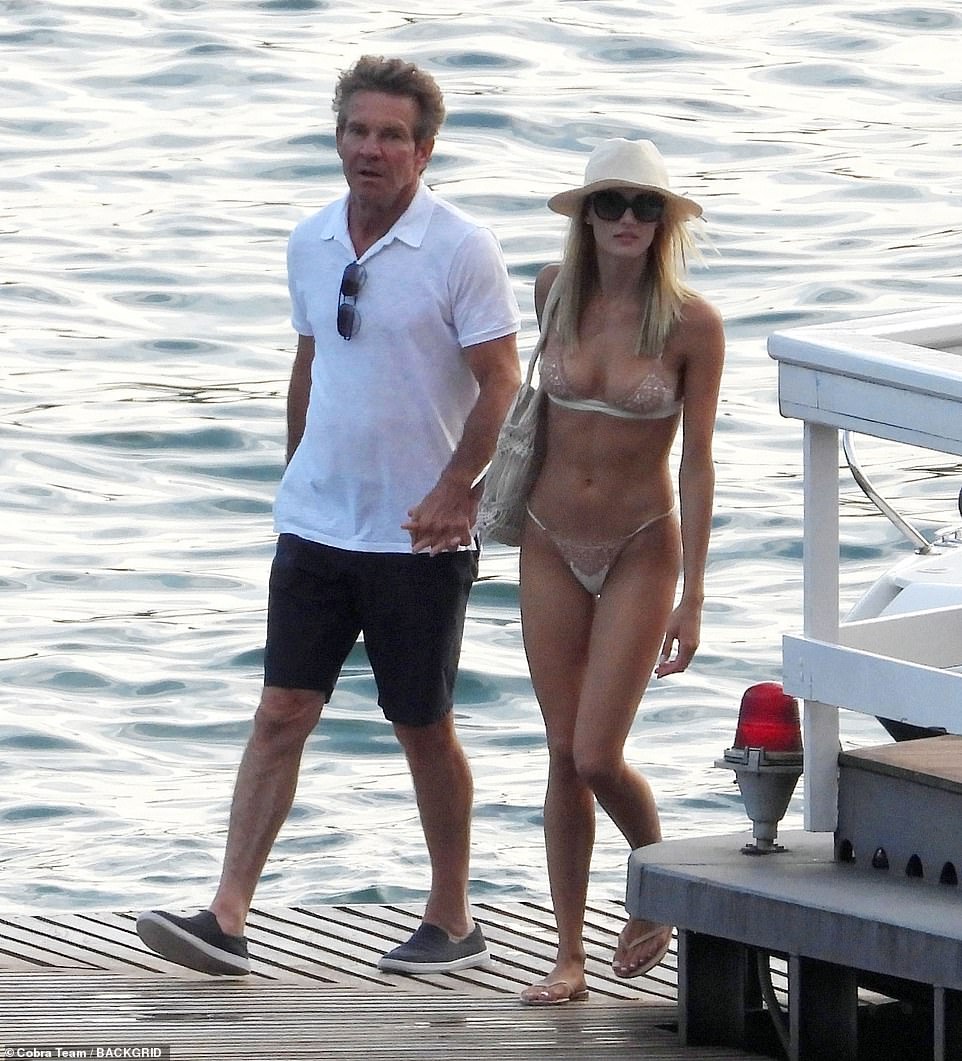 New love: Dennis Quaid looked happy to be in the first throes of romance once more as he packed on the PDA with new girlfriend Laura Savoie in Lake Como, Italy on Wednesday 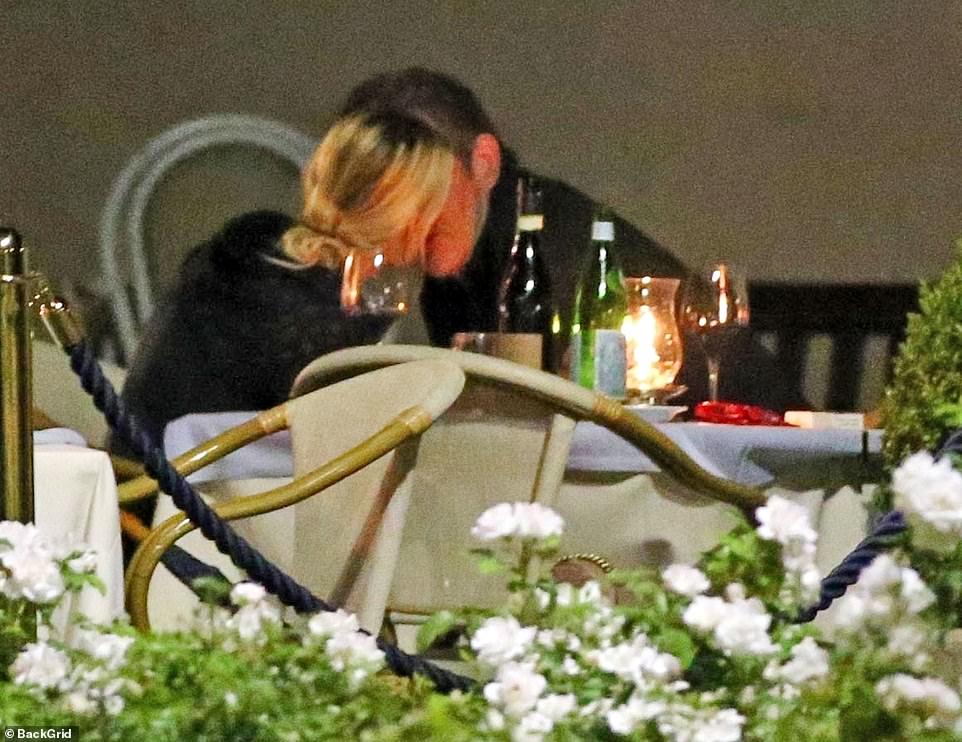 PDA: The pair were seen locking lips over a romantic dinner that evening in the upscale resort area

Dennis showed off his hunky frame in a tight white polo shirt paired with black shorts and navy boat shoes as he held hands with his glamorous girlfriend.

Looking relaxed, he sported tousled locks, with a smattering of stubble decorating his chiselled jaw.

Laura showcased her ample cleavage and taut midriff in a cream and taupe string lace bikini top as she wrapped a loving arm around the actor.

She drew the eye to her peachy derriere and lithe legs in a matching pair of high-rise bottoms. 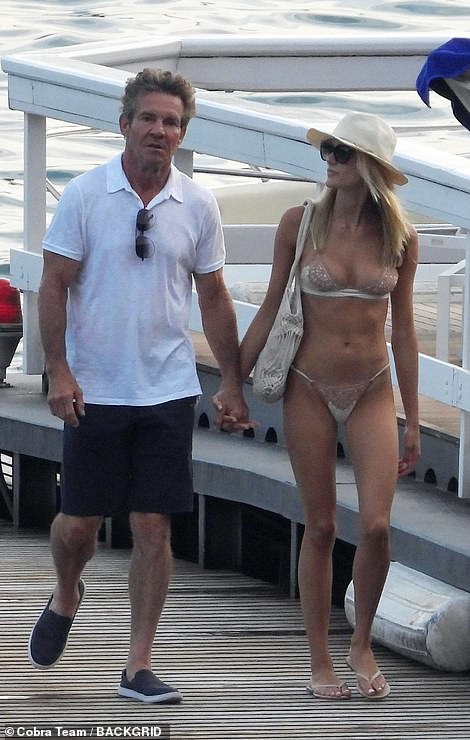 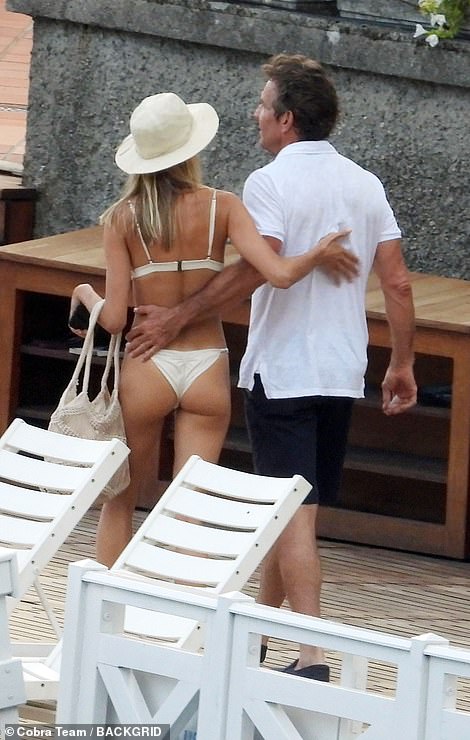 Romance: The Far From Heaven star, 65, was smitten as he held hands with his stunning bikini-clad girlfriend, 26 while they took in the scenic views at the prestigious Villa D’Este 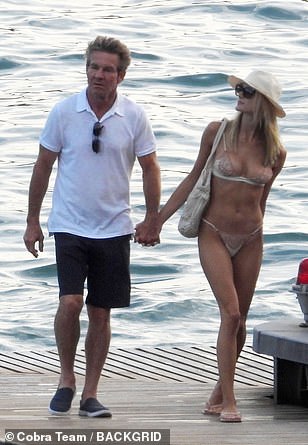 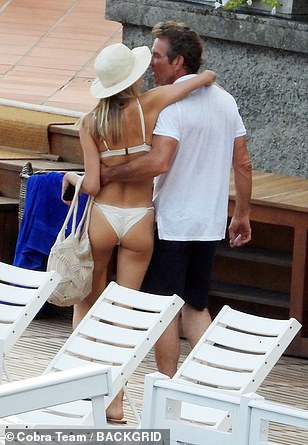 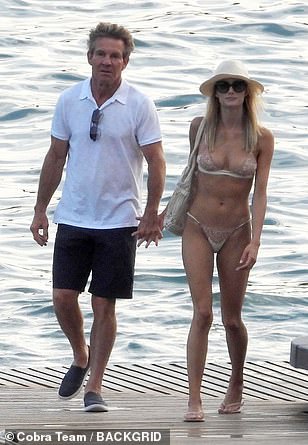 PDA: Dennis showed off his hunky frame in a tight white polo shirt paired with black shorts and navy boat shoes as he held hands with his glamorous girlfriend 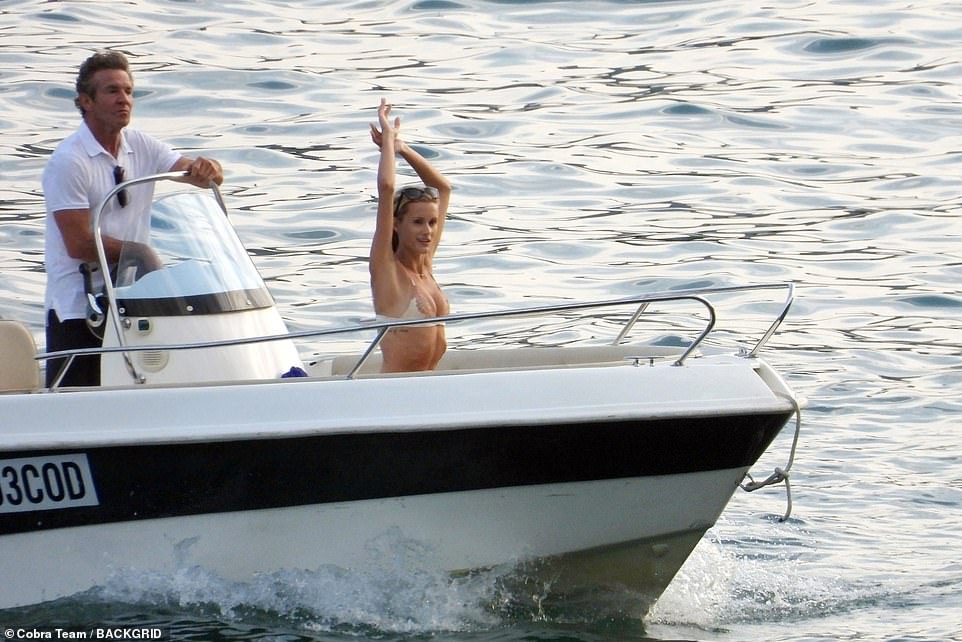 All at sea: Dennis looked relaxed as she watched his girlfriend soak up the sun 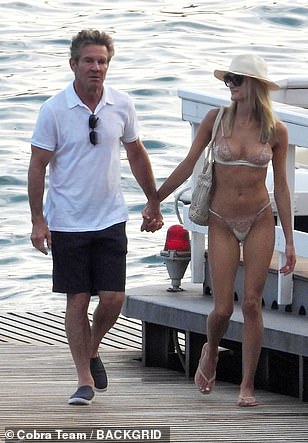 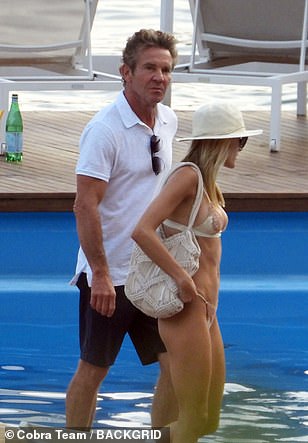 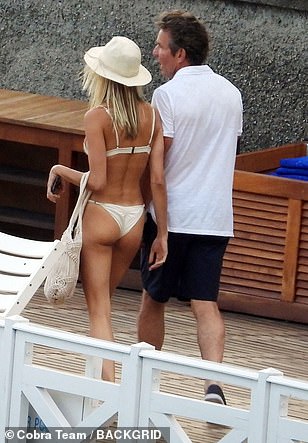 Happy couple: The pair, who have been dating for several months, looked closer than ever as they walked along 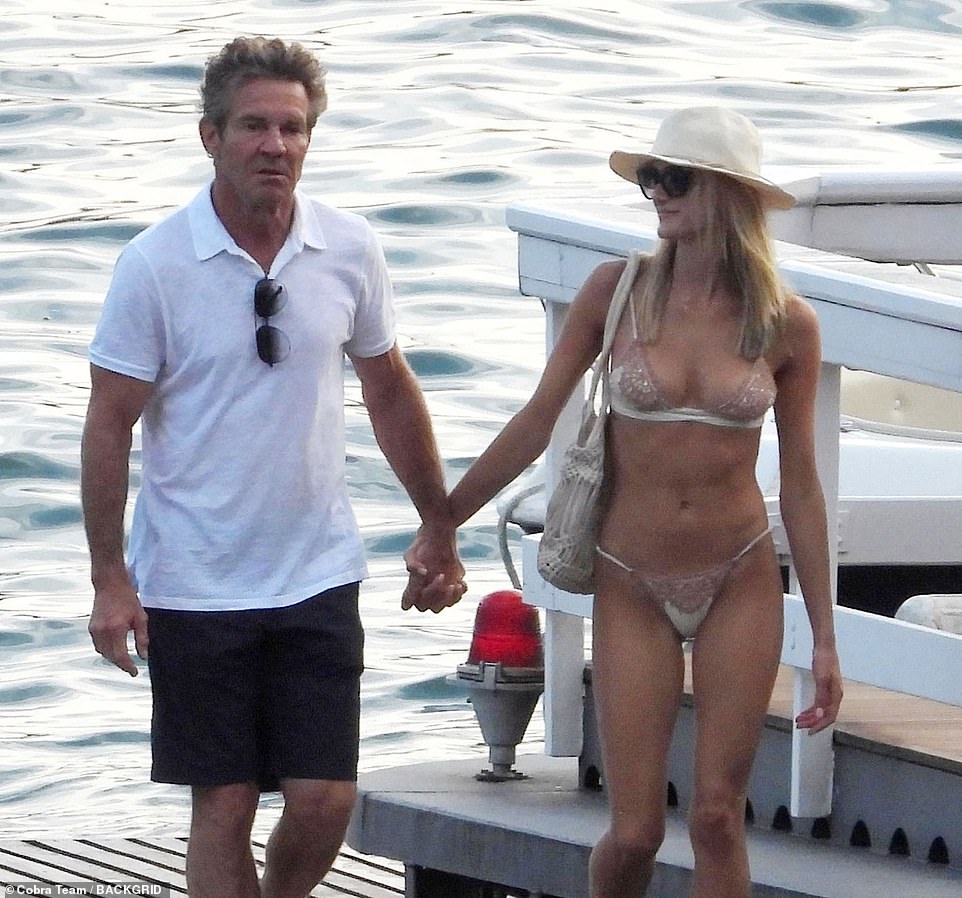 Busty: Laura showcased her incredible figure in the scanty bikini as she strolled hand-in-hand with Dennis

Her blonde locks were styled sleek and straight while she shielded her visage from the sun with a stylish cream hat and shades.

The hot new couple were also seen sharing a passionate kiss over a red-wine soaked dinner date in the upscale resort area.

The actor was first linked to the young student back in June, shortly after his split from long-time girlfriend Santa Auzina, 32. 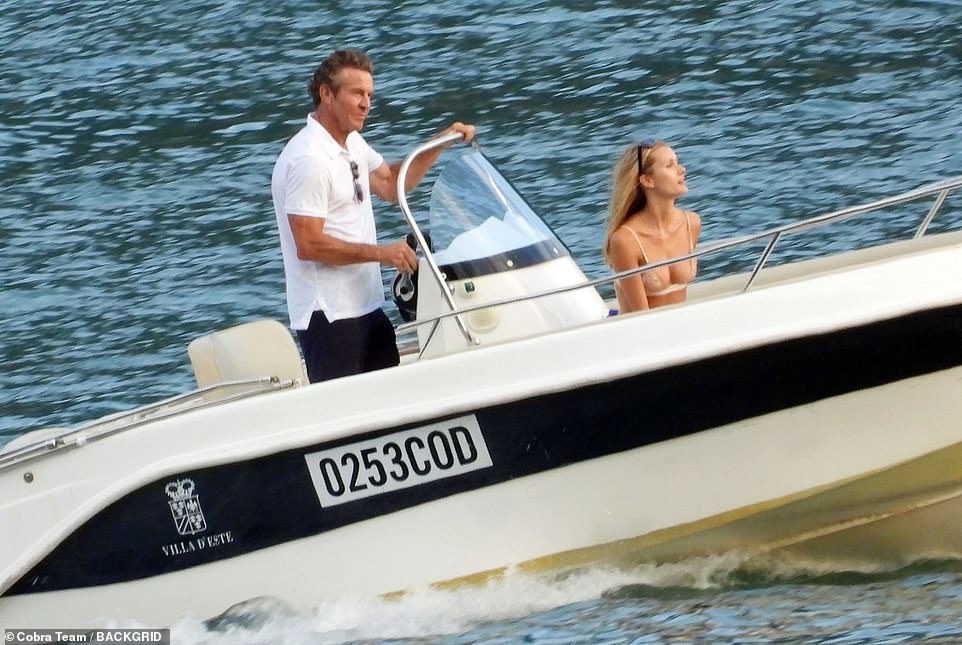 Sunkissed: The coiple looked relaxed and happy as they soaked up the sun in Italy 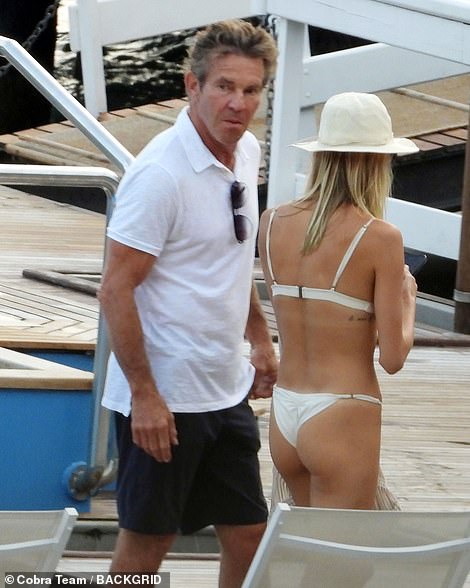 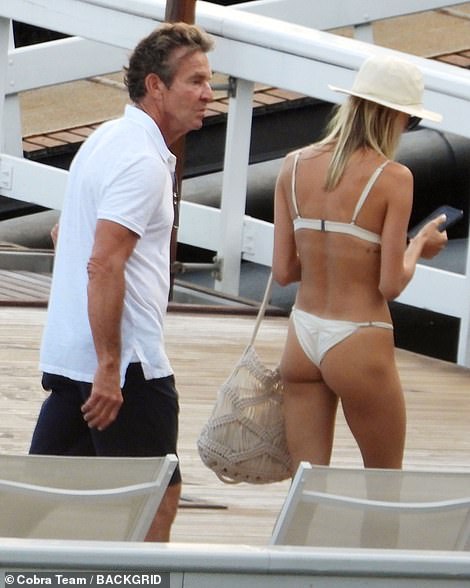 Smitten: The couple took in the scenic views as they enjoyed the day together in Italy 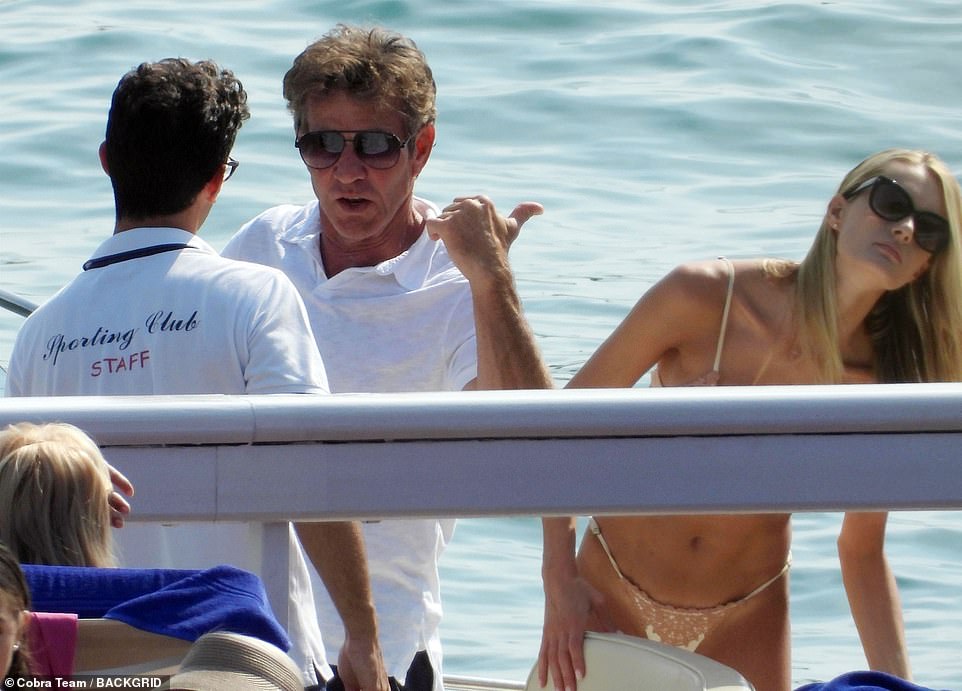 New couple: Laura oozed confidence as she flaunted her honed bikini body in the tiny bikini next to Dennis 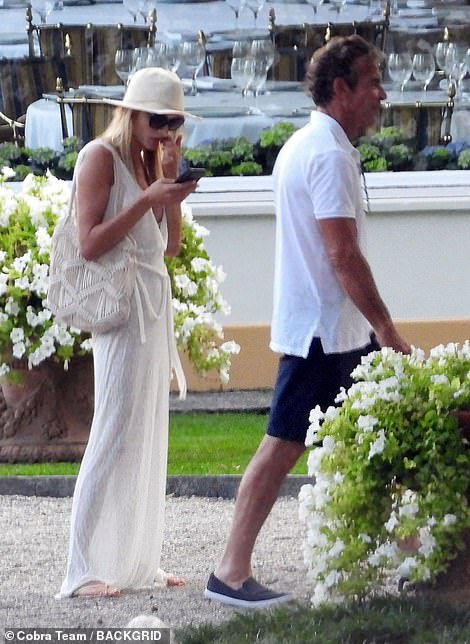 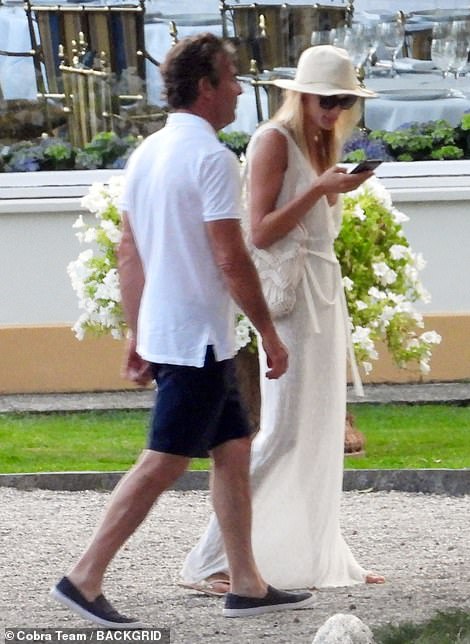 Chatty: The couple enjoyed some relaxation as they left the pool area and headed to dinner that evening 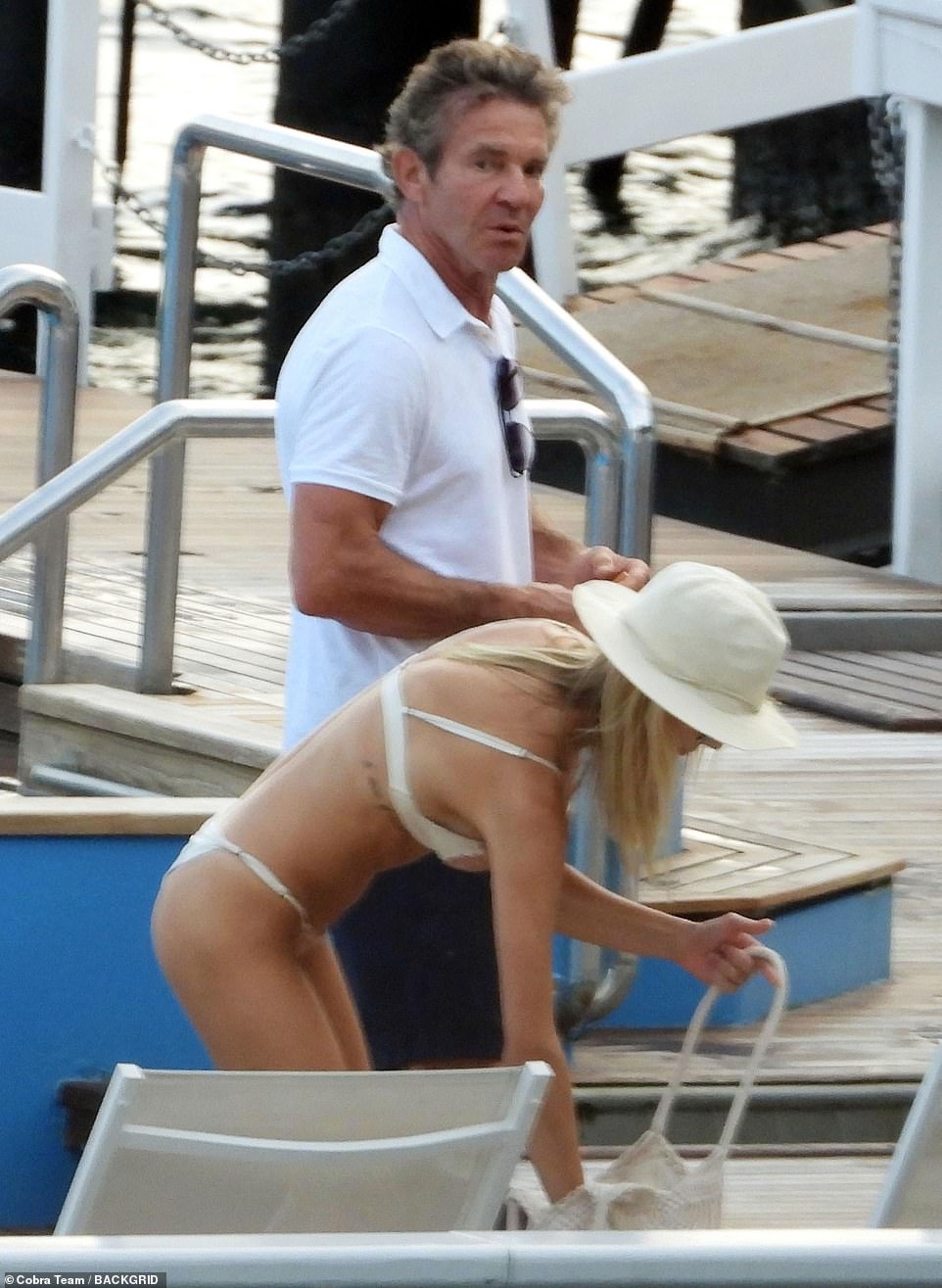 Wow factor: Laura looked stunning in her scanty swimwear as she chatted with her new beau in the sun

Laura has been posting loved-up snaps of herself with Dennis onto her private Instagram account, including a kissing snap where she declared her love for the actor, according to reports.

Laura also shared a picture of them embracing as she confessed in the caption, ‘Never been happier.’ 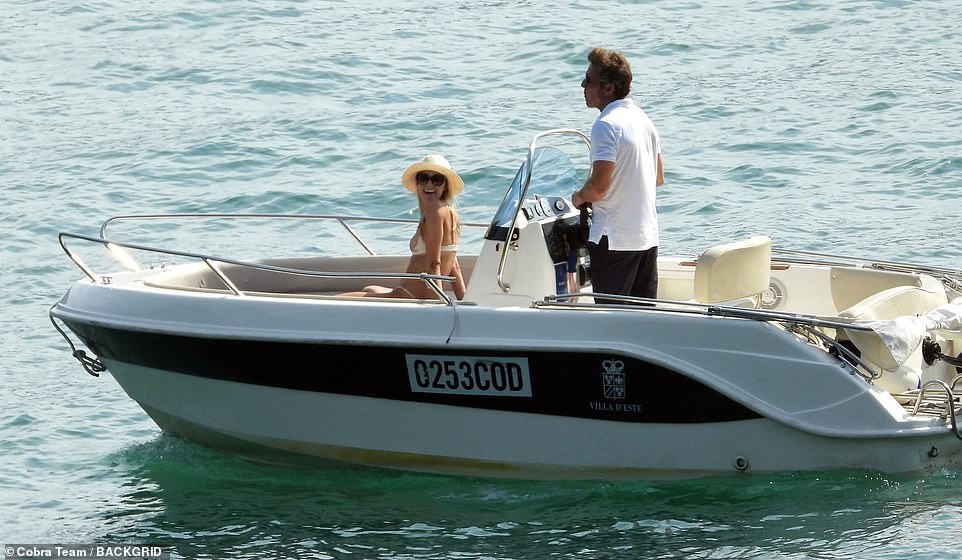 Laugh out loud: Laura appeared enraptured by one of Dennis’ jokes as he expertly steered the boat 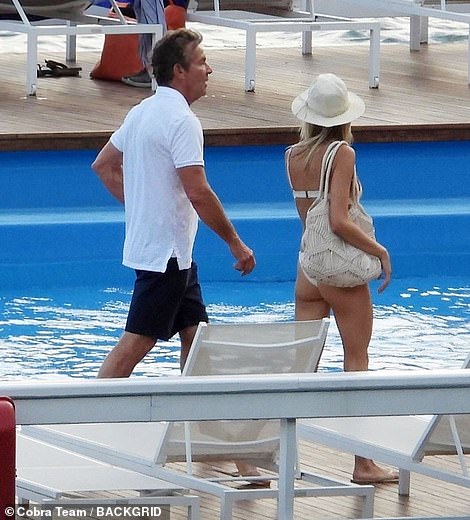 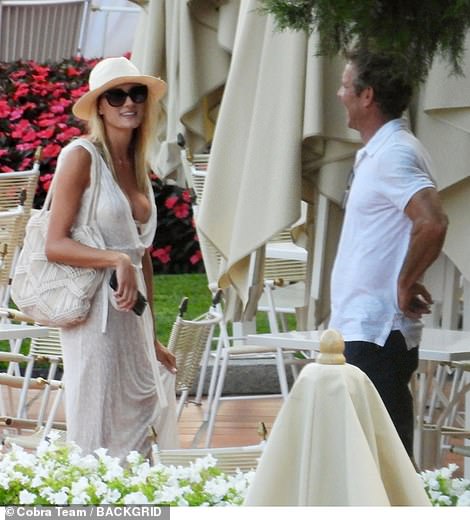 Refreshed: The Hollywood hunk looked smitten with his new partner as they whiled away the afternoon 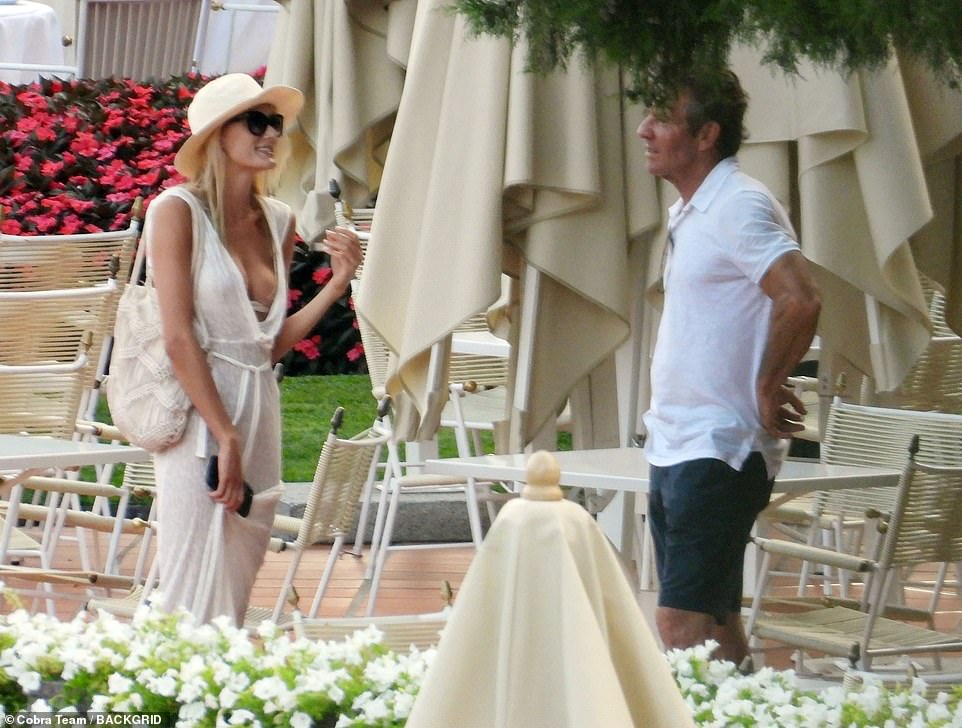 Smile: Laura shot the look of love at her dashing new man as Dennis stared into the distance 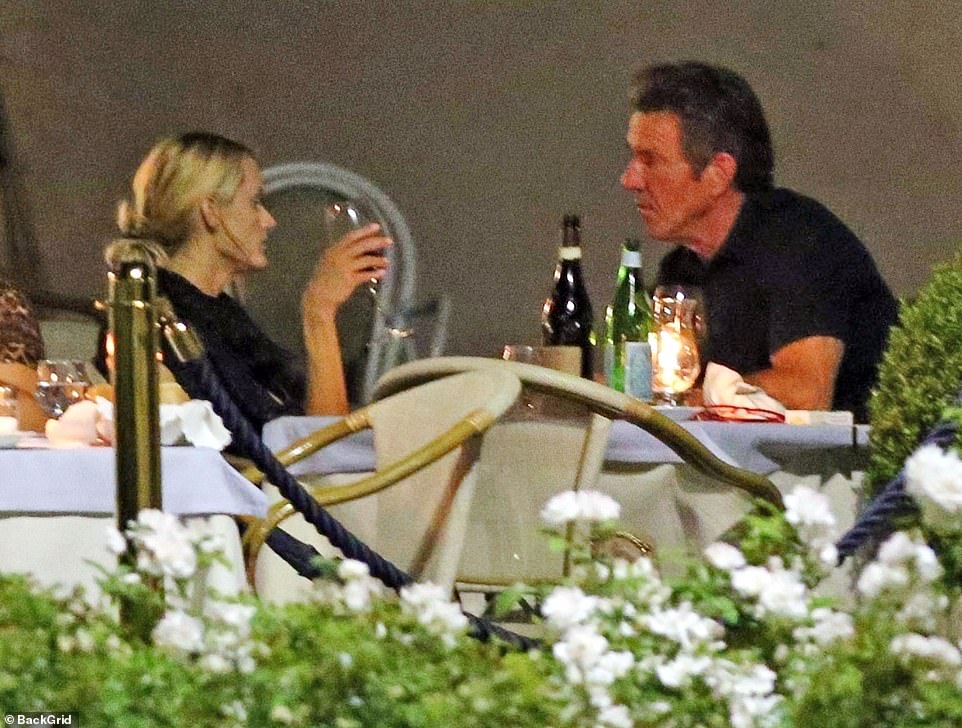 Candlelit: Dennis and Laura enjoyed some red wine over a candlelit dinner date in Lake Como 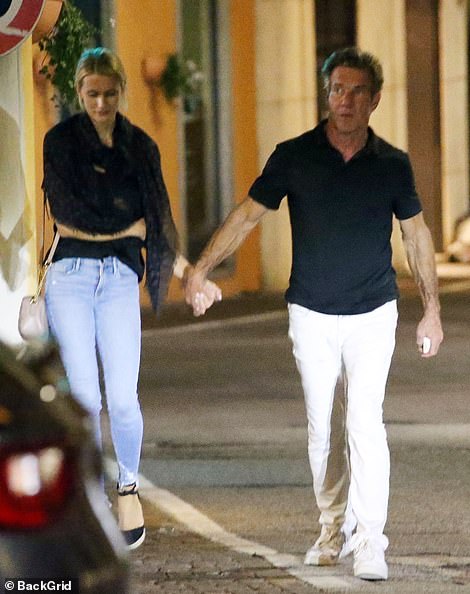 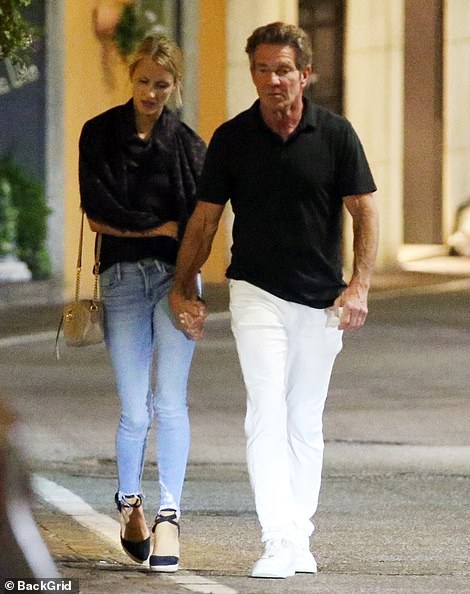 Smitten: Dennis sweetly held his new girlfriend’s hand as they walked down the street together

She graduated valedictorian from Pepperdine University in 2015, where she attended as an undergraduate, according to Us.

According to an UsWeekly insider, Laura had previously been romantically linked to Jeremy Piven.

The romance occurred when she was a college student at Pepperdine, according to People.

Dennis has been dating Santa for more than two years, though the date of their split is unclear.

They were last seen together after a dinner date at Craig’s in December 2018.

In late April, the thrice-married actor revealed he hadn’t ruled out tying the knot a fourth time.

‘I never rule out anything – but currently not,’ he told Metro when asked if he would consider proposing to Santa.

Dennis was last married to Kimberly Quaid from 2004 to 2018, and they have 11-year-old twins Zoe and Thomas together.