Demi Moore, 56, looks like a teenager enjoying an at-home beauty treatment in her tub… after tell-all about Ashton and Bruce becomes a best-seller

Demi Moore’s tell-all book Inside Out, which details her splits from Bruce Willis and Ashton Kutcher, has become a best seller on the The New York Times book list.

And now the 56-year-old Ghost actress seems to be taking a mini break from exhaustively promoting the page-turner for months.

The mother-of-three looked like a teenager as she showed off her white face mask while in the bathtub. 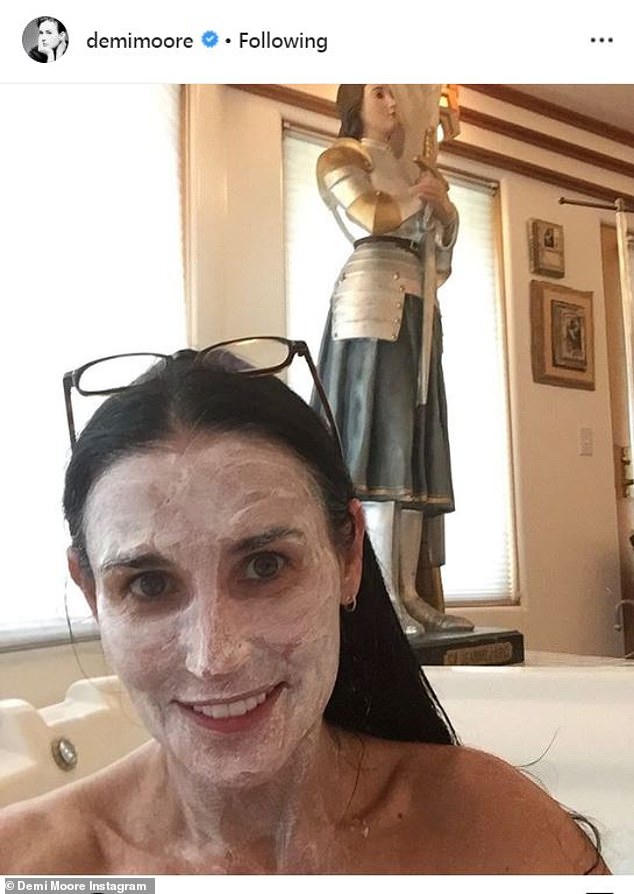 Beauty time: Demi Moore was seen with a white face mask on as she took a bath in this social media post shared on Wednesday

In her caption the star said, ‘Midweek mask with Joan of Arc watching over me.’

She sat in a Jacuzzi tub with jet as her raven hair was worn down her back. She had reading glasses on her head and small hoop earrings.

On the edge of the tub stood the Joan of Arc statue and behind that were two framed pictures that hung on the wall.

Funny lady: In her caption the star said, ‘Midweek mask with Joan of Arc watching over me’

The same day she soaked in the tub, DailyMailTV revealed who her secret lover was that she said in her new book she slept with before marrying Freddy Moore.

Moore did not name the man.

DailyMailTV has revealed it’s Paul Carafotes, her co-star from the 1981 movie Choices. 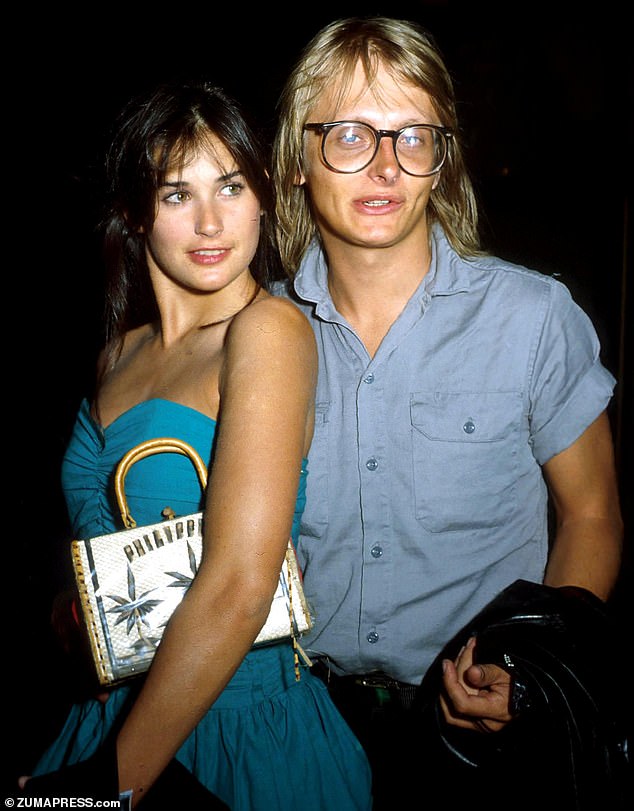 Cheating heart: The same day she soaked in the tub, DailyMailTV revealed who her secret lover was that she said in her new book she slept with before marrying Freddy Moore; seen in 1982

Carafotes has revealed how ‘wild’ Moore scaled a fire escape and climbed through his kitchen window for a steamy night of love making – hours before she married her first husband.

In an exclusive interview with DailyMailTV, Paul said he had a months-long affair with Demi behind rocker Freddy’s back after meeting her on a movie set in 1980. 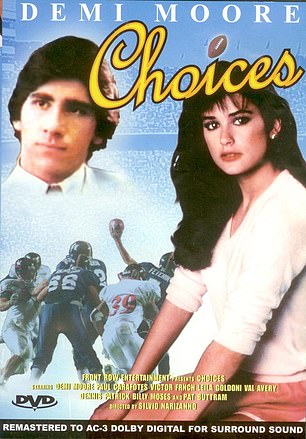 DailyMailTV has revealed she had a romance with Paul Carafotes, her co-star from the 1981 movie Choices

And the affair – which included ‘indiscretions’ in his movie trailer – culminated with 18-year-old Demi sneaking out of her own bachelorette party to visit her lover’s fourth-floor apartment clutching a bottle of Dom Perignon champagne.

Moore’s book has been a blockbuster.

Last week she took the time to celebrate herself and her achievements.

‘Got my cover all dressed up to tell you the big news… #InsideOutBook just hit #1 on @nytimes bestseller list!’ she announced in the post’s caption.

‘This is all so much more than I could have expected and I am so overwhelmed by the support and love you’ve given it. Thank you guys for reading and allowing it to resonate with you xx,’ Moore wrote.

In the first photo in the series, the G.I. Jane star can be seen smiling while holding a copy of the novel. 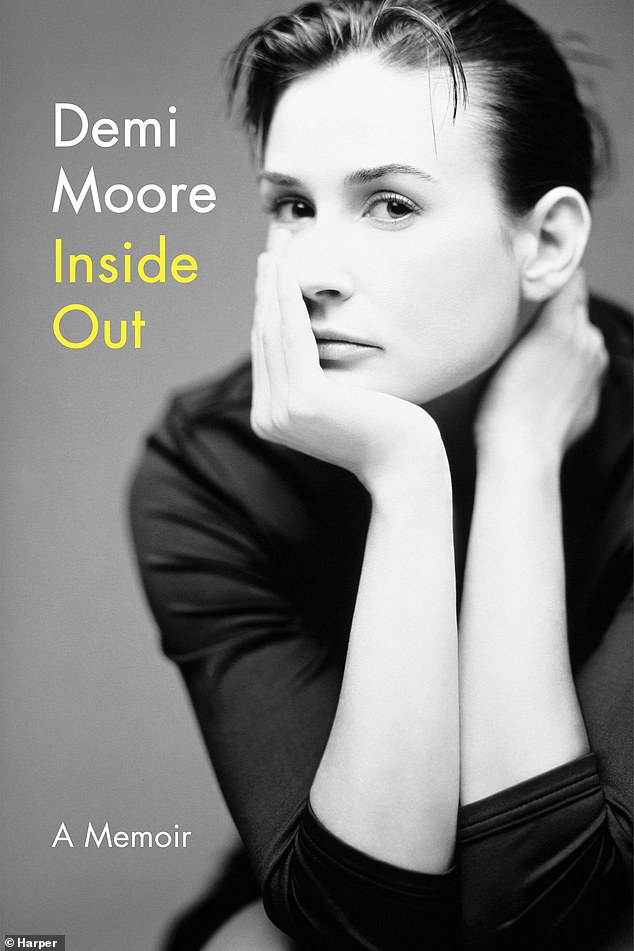 A hit! Moore’s book has been a blockbuster as she has promoted the stories nonstop 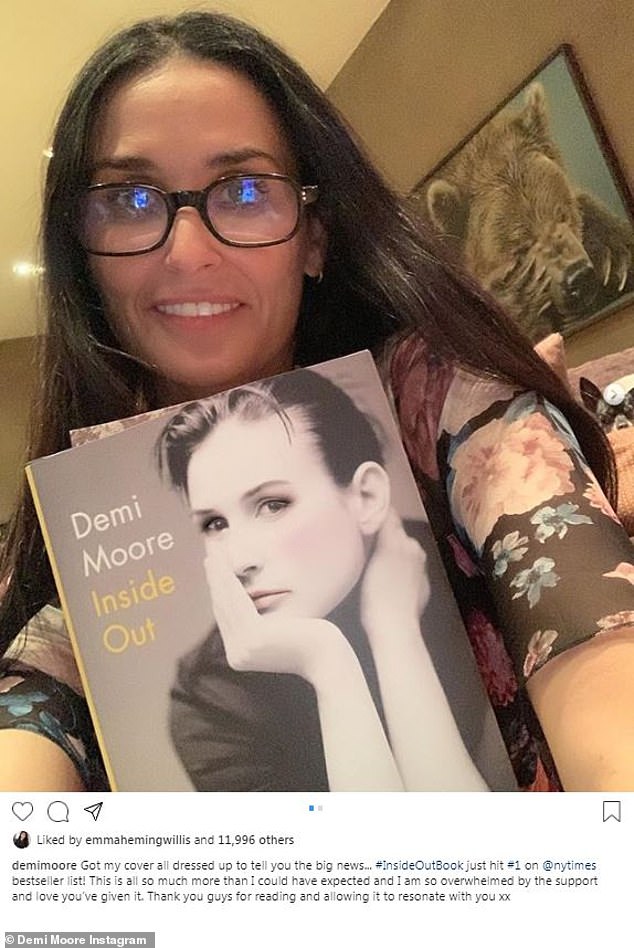 Celebrate! Last week she took the time to celebrate herself and her achievements. The St Elmo’s Fire star took to Instagram to celebrate her just published book reaching the top of The New York Times Best Sellers list

The second photo is a screenshot of the list, with Inside Out at the top spot in the nonfiction category.

In the book, the Striptease actress details her marriages and divorces along with raising the three daughters she shares with Bruce Willis as well as her battle with drug and alcohol addiction.

She also talks about growing up in New Mexico as the daughter of a mother who had her own struggles with addiction and a dad who wasn’t her biological father.

In the candid tell-all, the star recounts how she was raped at just 15 years old by an older man who had given her alcoholic mother $500. 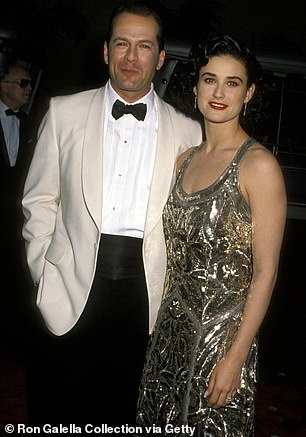 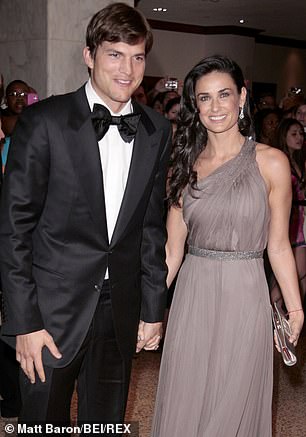 Blended family: After her divorce from Bruce Willis, 64, she started dating Ashton Kutcher, 41, who is 15 years her junior 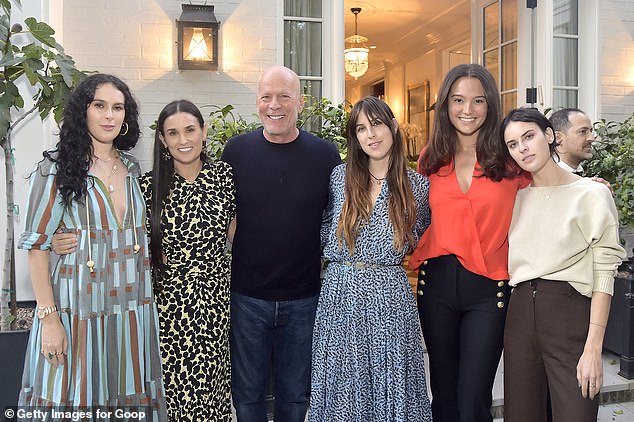 They all get along: With, from left, Rumer Willis, Bruce, Scout, Emma Heming Willis and Tallulah in September

She describes how she became pregnant with Kutcher’s baby but miscarried at six months.

They went on to tie the knot in 2005 when she was 42 and he was 27, but during the marriage she relapsed and started drinking and abusing drugs again.

Moore also said they took part in threesomes and accused Ashton of cheating on her. 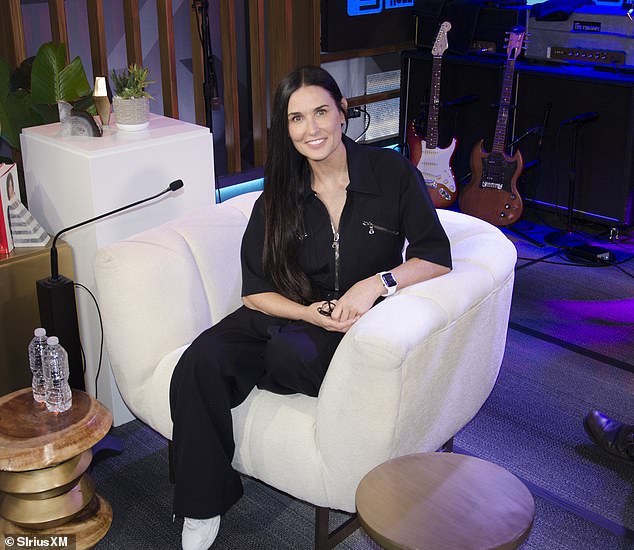 Something to look forward to: The former Brat Packer was on SiriusXM’s The Howard Stern Show on Wednesday

Her other revelations include her estrangement from her daughters following a near fatal overdose in 2012 and her obsession with dieting and working out in her 20’s and 30’s.

Her daughter, Rumer Willis, 31, recently spoke about her mother’s strength and candor in the book.

‘I’m so proud of her vulnerability,’ the actress, who was a co-host on The Talk on Tuesday, said of Moore’s book.

The Kentucky-born daughter of Demi and Bruce Willis said her mom has been a ‘beacon of strength’ for women over her decades in Hollywood.