A few days after her newborn daughter’s arrival, the ‘Yellow Bone’ songstress displays her post-baby figure while dancing in a striped nursing bra and black baggy pants.

AceShowbiz –DaniLeigh is giving a look at her post-baby body. Just one week after she reportedly welcomed her first child with her ex-boyfriend DaBaby, the “Yellow Bone” singer/rapper took to her social media platform to show off her fit physique.

On Friday, August 20, the 26-year-old new mom made use of Instagram Story to display her postpartum tummy. In her videos, the “Lil Bebe” hitmaker could be seen dancing to Moneybagg Yo‘s hit “Shottas (Lala)”. She donned a beige-and-white striped nursing bra and black baggy pants.

In following Stories, Dani posted mirror selfie videos of her wearing a beige-colored body shaper from Organicas4life. “@Organicas4life faja getting me right fr,” she wrote over her clip with “Need to Know” by Doja Cat playing in the background. 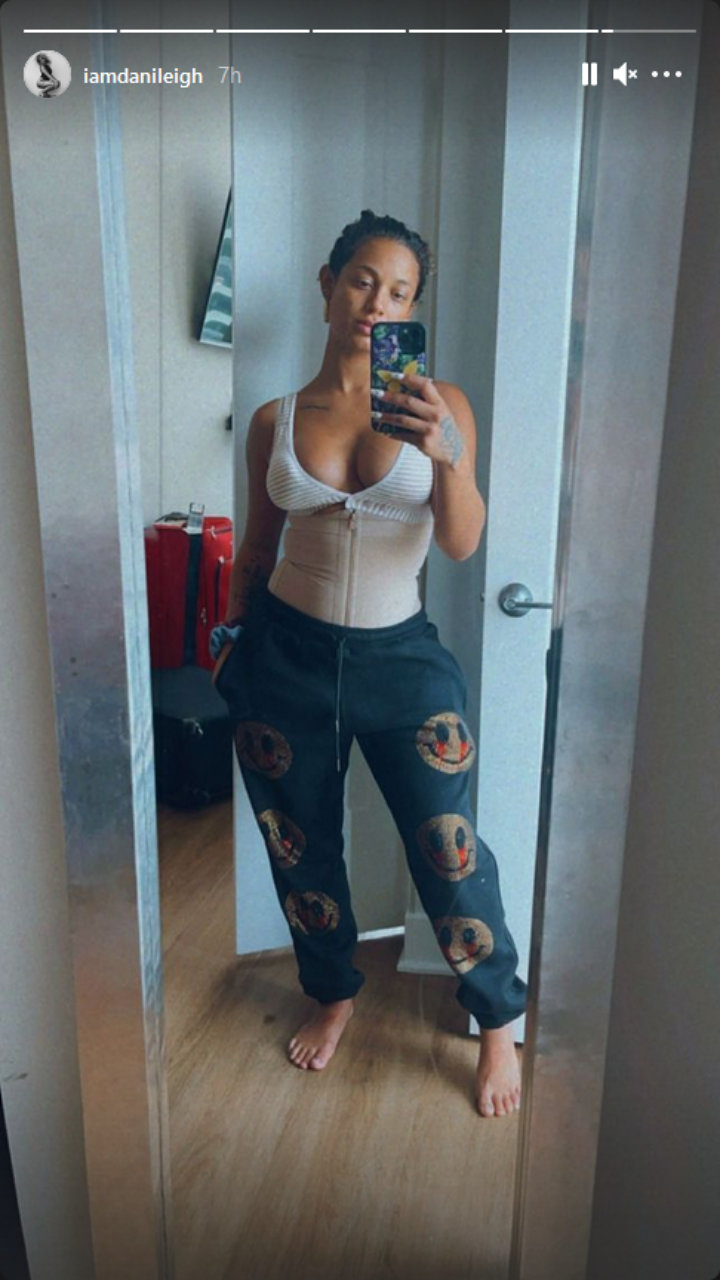 DaniLeigh shows of her post-baby body.

Dani reportedly gave birth to her baby girl on August 11. At the time, a celebrity gossip account The Neighborhood Talk reported, “Neighbors, we can positively confirm after speaking with our sources that Dani successfully gave birth to DaBaby last night! Congrats.”

Dani confirmed her pregnancy in mid-July following months of speculation. At the time, the “In My Feelings” artist posted on her Instagram page a series of stunning maternity photos which were taken in the Dominican Republic.

In one image, Dani was photographed wearing nothing but white fabric covering the front part of her body while she was dripping wet. In another pic, the “Be Yourself” singer could be seen posing seductively on the rock. “As you grow so does my love, discipline, and focus,” she captioned her post.

Nearly a week after she confirmed her pregnancy, Dani revealed her baby’s gender. In the photos, she flaunted her growing pregnant belly as she only wore a pink blazer with nothing underneath, hinting that she’s pregnant with a baby girl. In the caption, she playfully wrote, “It’s a …….”

Dani hasn’t revealed who her baby’s father is. However, it’s assumed that she shares her newborn daughter with her ex DaBaby. “NOT DANILEIGH BEING PREGNANT W DABABY’S CHILD CITY GIRLS DOWN BY A MILLION,” a fan wrote on Twitter, while another reacted, “Dani Leigh is pregnant with Dababy child. Omg.” DaBaby himself appeared to confirm the speculations by liking her Instagram post featuring her maternity photos.