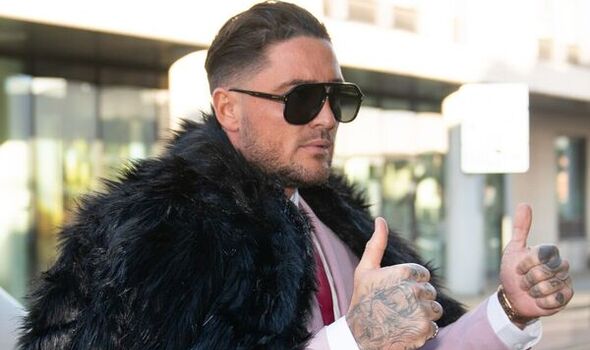 The 32-year-old is alleged to have filmed himself having sex with Love Island star Georgia Harrison, 27, in his garden on August 2, 2020, on a CCTV camera before forwarding it to someone on Whatsapp.

He is further accused of posting the footage to his OnlyFans account, a subscription-based adult website, on November 8 before leaving it up for a month.

Chelmsford Crown Court heard that, in a police interview in March last year, Bear told officers: “I’m going to lose my house because of this. You don’t understand.

The world has gone mad.”Prosecutor Jacqueline Carey told the court that, when asked if he had uploaded the video to his OnlyFans account, Bear took issue with the accusation and said: “I could have a mad twin brother.”

Bear, wearing a black shirt and tie underneath a grey suit, laughed in the dock this afternoon as the transcript of the interview was read out to jurors.The court also heard details of his arrest after he landed at Heathrow.

Police officers described Bear as “very uncooperative” at the airport, as he initially said he was flying on his own – but it later emerged he was flying with his brother, the court heard.

Bear also allegedly told officers his phone was in his suitcase in the plane’s hold – but then said, at baggage reclaim, he could not remember what his case looked like.

A large pink suitcase with the word “Bear” written in large letters on it was then spotted and identified as Bear’s, it was said.

Jurors heard Bear was asked where his phone was, to which he responded: “It’s in my suitcase, love”. His phone could not be found and he was strip searched at the airport, the court heard.

It was said by the prosecution that a “SIM card key”, a small device used to open the SIM port in a phone, fell out of his jogging bottoms.

Asked in the police interview whether he regularly carried this key, Bear said: “No it’s f*****g weird. I was surprised when I saw it.

It doesn’t look good does it.”Reading from the transcript, the prosecutor added: “Then he laughed.”Jurors heard yesterday (Tuesday) that Bear and Miss Harrison met in 2012 but started dating in October 2018 after appearing on MTV’s The Challenge together.

They had split by July 2019 but, by August 2020, they were speaking again and Miss Harrison said she went to Bear’s house in Loughton, Essex, for a cup of tea.

On August 2, the pair took part in an all-day drinking session, eating lunch at a local Turkish restaurant, before returning back to Bear’s home where they “chatted, had a laugh and drank tequila shots and wine”.

Giving evidence yesterday, Miss Harrison said she had “absolutely no idea” he had CCTV until he mentioned it later.

She told jurors this afternoon: “After what happened, I was in the worst state of my life. I can’t explain the shame I felt.

I couldn’t leave my room.“Instead of explaining, he put his subscription fee up.

My brother and sister had to see me having sex on his account.“Whether he did it or not – that’s no way to act if that video is mistakenly on your account. It’s brazen.”She added: “I’m hurt, I’m upset, I’m ashamed and I deserve justice for what I have been through and he deserves consequences.”