Coco Lodge put on a very flirty display with her fellow dumped Love Island star Jack Keating during the series wrap party at London’s ME Hotel on Monday night.

The graphic designer, 27, who left little to the imagination in a skimpy black cutout dress, cosied up to Ronan Keating’s son, 23, as Ekin-Su Cülcüloğlu and Davide Sanclimenti were crowned winners at the villa in Mallorca.

Meanwhile, her former love interest Andrew Le Page and his girlfriend Tasha Ghouri reached fourth place and professed their love for one another during their ‘declaration of love’ speeches. 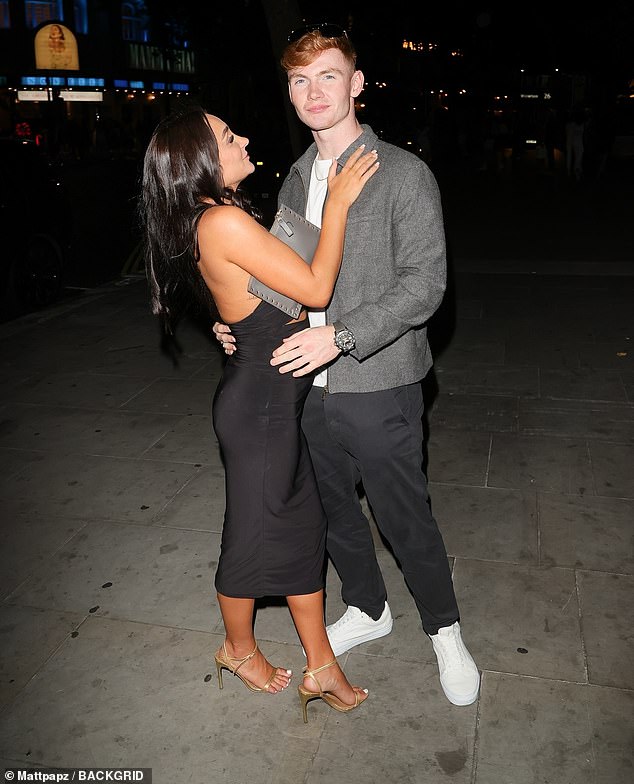 Cosying up: Coco Lodge put on a very flirty display with her fellow dumped Love Island star Jack Keating during the series wrap party in London on Monday night

Jack looked dapper in a grey jacket which he wore above a classic white T-shirt and black trousers, while completing his look with white trainers.

Despite it being pitch-black outside, the celebrity offspring styled a pair of black sunglasses into his short ginger locks while walking hand-in-hand with Coco.

Love Island fans struggled to contain their emotions when Tasha revealed Andrew removes her cochlear implant at night during Monday’s finale episode, before they were announced in fourth place.

The show’s first deaf contestant, 23, welled up with tears as she thanked her boyfriend for embracing her ‘superpower’ during her ‘declaration of love’ speech. 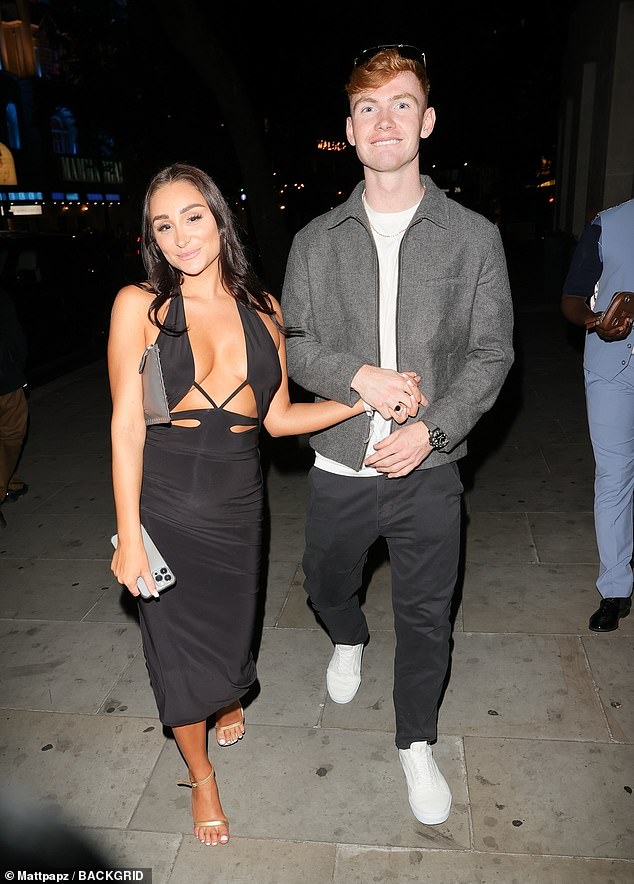 Cute: The graphic designer, 27, who left little to the imagination in a skimpy black cutout dress, cosied up to Ronan Keating’s son, 23 as they strolled hand-in-hand 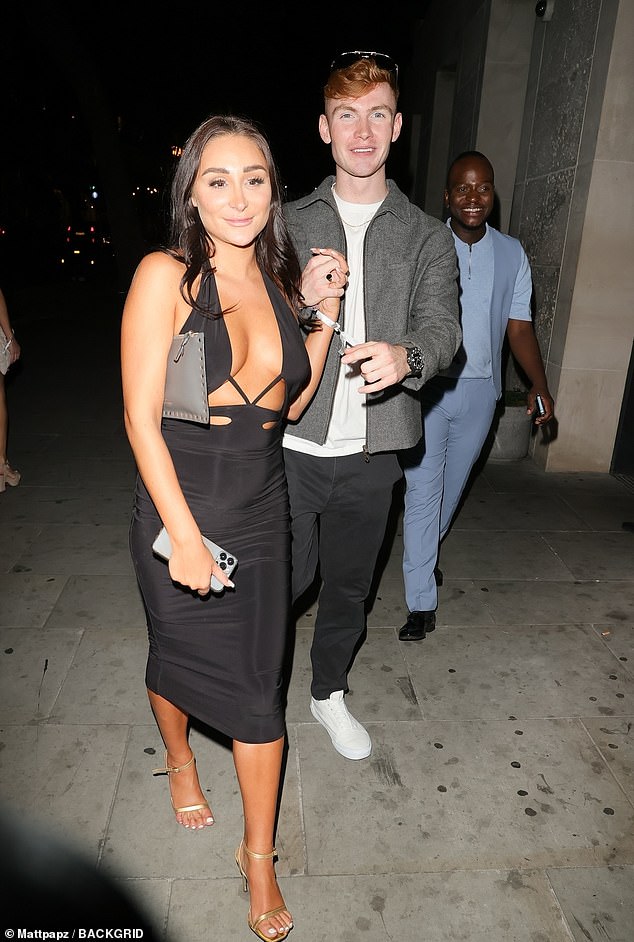 Suave: Jack looked dapper in a grey jacket which he wore above a classic white T-shirt and black trousers, while completing his look with white trainers

Reading from his own script, Andrew, 27, said it was when she disclosed her hearing impairment that he fell in love with her, adding that she is an ‘inspiration’ to others.

Tasha said in full: ‘Andrew… walking into this villa, I came in with no expectations but hoped to meet my love, especially my first love.

‘I’ve never felt this way before, you were everything I asked for. What I loved about you is your ambition, dedication, the way you care for others, your sexy body. There’s not a single thing I’d change about you. I’m so lucky to have you.

‘Our journey has had its up and downs but what’s so special about it is we always knew we’d find our way back to each other because our connection is unbreakable and magical. 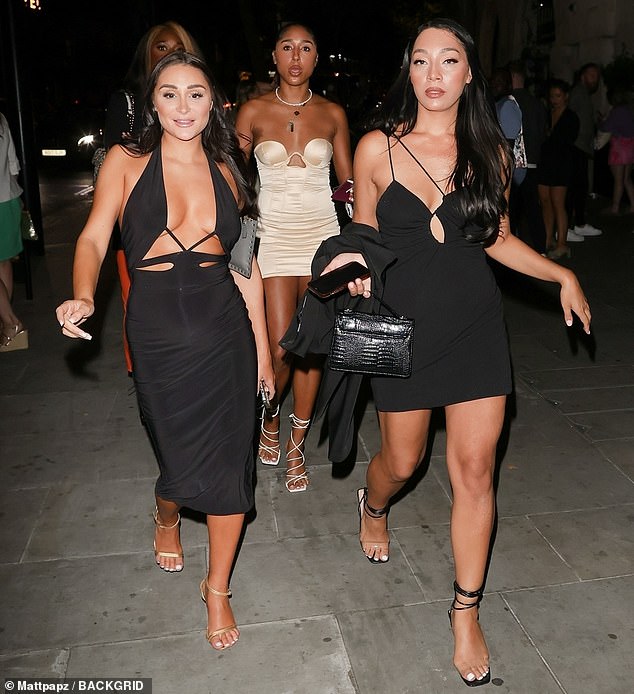 Ladies’ night: Coco looked in good spirits as she left the party with Afia Tonkmor and friends

‘My dad said, “She’s my princess and there’s room for a prince and you’ll be fantastic at it.”

‘Thank you for accepting me for me and loving my superpower. The fact that when I fall asleep and you take out the cochlear implant for me, that’s how I know you’re the one. So here’s to you and me, our future. I’m so mad about you and I love you.

He said: ‘We have so many dreams to conquer. I can’t wait to see what you and I achieve next.

‘There are so many things I love about you, your beautiful eyes when we look at each other from the other side of the garden, when you scrunch your nose.

‘My favourite thing and something we will do forever… our secret hand squeeze to let each other know we always have each other’s back.

‘The exact moment I fell in love with you was when you told me your superpower. I never truly knew how special you were until you shared that with me. 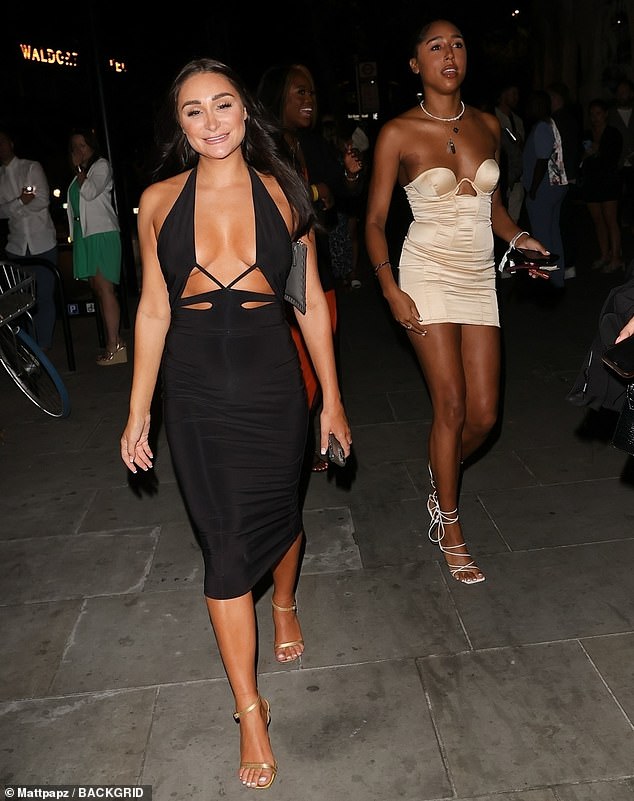 Dressed to impress: The bombshell looked incredible in her form-fitting dress and heels 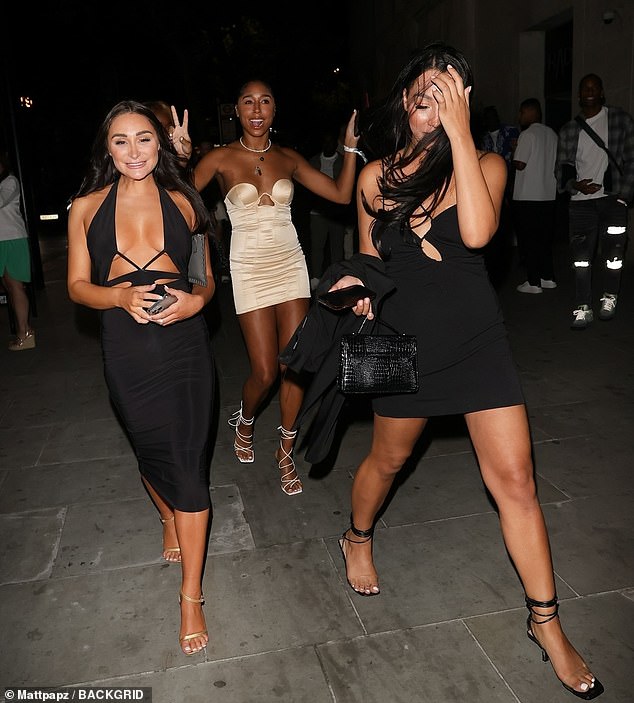 Time to celebrate! The group were celebrating a triumphant series of Love Island

‘You’re so incredible brave and inspired more people than you’ll ever know. You really are one of a kind and I feel like the luckiest guy in the world.

Bawling fans soon wrote on Twitter that his gesture is ‘adorable’ and ‘so sweet’.

They penned: ‘When tasha said andrew takes out her cochlear implant before bed i could not hold back the tears #LoveIsland.’

‘andrew taking tasha’s cochlear implant out is so adorable #LoveIsland.’

‘When Tasha said that Andrew takes her cochlear implant out for her. Beautiful.’

Andrew was coupled up with Tasha but grew close to Coco during the show’s Casa Amor twist, with the pair passionately kissing in the pool, as well as sharing the intimate moment together under the sheets.

Confessing the act to Tasha once she had returned to the main villa, Andrew attempted to play down his sexual chemistry with Coco, saying: ‘I licked her t*t or whatever.’ 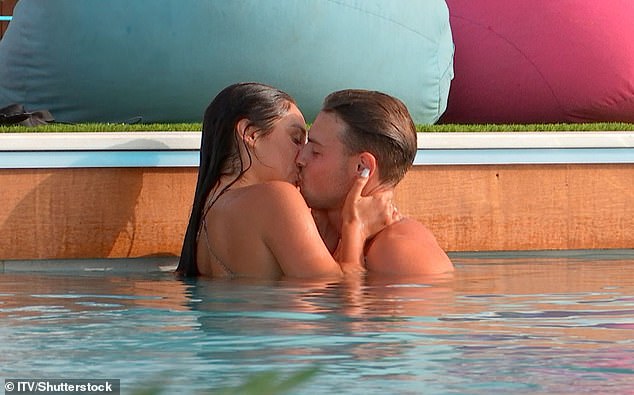 Oops: Andrew was coupled up with Tasha but grew close to Coco during the show’s Casa Amor twist, with the pair passionately kissing in the pool, as well as sharing the intimate moment together under the sheets

HOW DOES A TRADITIONAL COCHLEAR IMPLANT WORK?

Cochlear implants are small hearing devices fitted under the skin behind the ear during surgery.

They have an external sound processor and internal parts, including a receiver coil, an electronics package and a long wire with electrodes on it (an electrode array).

The external processor takes in sound, analyses it and then converts it to signals that are transmitted across the skin to an internal receiver-stimulator, which sends the signals along the electrode array into a part of the inner ear called the cochlea.

The signal is then sent to the brain along the hearing nerve as normal.

This means cochlear implants are only suitable for people whose hearing nerves are functioning normally.

The implants cannot restore normal hearing but they can give a deaf person a good representation of sounds, helping them understand speech.

Whereas hearing aids amplify sound so they can be detected by damaged ears, cochlear implants bypass damaged parts of the ear and directly stimulate the auditory nerve.

Signals generated by the implant are sent via the auditory nerve to the brain, which recognizes the signals as sound.

Hearing through an implant is different from normal hearing and takes time to get used to it.

It allows people to recognize warning signals, understand their environment and enjoy conversations with people.

If a cochlear implant is recommended, it will be inserted into the ear (or both ears) during an operation and switched on a few weeks later.

The couple finished ahead of Gemma and Luca who were awarded second place and narrowly missed out on the money, with bosses deciding to ditch the ‘split or steal’ twist that usually comes at the end.

In previous years, winners have picked an envelope which either has the prize money or nothing enclosed, with one person being given the £50,000 with the option to split or steal the cash.

This year, host Laura Whitmore announced they would automatically be sharing the money as producers opted to ditch the tradition which has been in place since series one.

As the news was announced, emotional Ekin-Su jumped into her beau’s arms as they celebrated their win and speechless Davide exclaimed he ‘couldn’t believe it’.

Earlier in the programme, Indiyah and Dami were awarded third place on the dating programme ahead of Tasha and Andrew who finished narrowly behind them in fourth place. 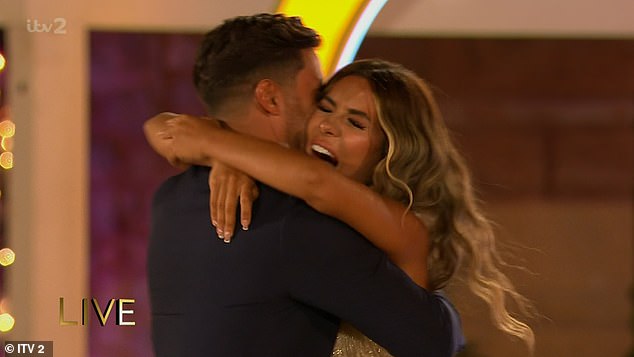