CHRISTOPHER STEVENS reviews the weekend’s TV: The Larkins is nothing less than the murder of a national treasure

What’s the point of it? For the life of me, I cannot see why The Larkins (ITV) exists, or who is expected to enjoy it.

The original Darling Buds Of May, starring David Jason and Pam Ferris as the rascally bon viveurs rearing their family in rural Kent, was a national sensation.

It made a major star of 21-year-old Catherine Zeta Jones, who played the oldest of the Larkin brood, Mariette. And for a couple of years, Pop’s catchphrase ‘Perfick!’ was on everyone’s lips.

But the show, based on H.E. Bates’s short stories, was a magical success because it took its escapism seriously. We really believed in that world of fresh air and tax dodges, Sunday roast dinners and romps in the haystack.

The remake with Bradley Walsh playing Pop and his son Barney as the gormless PC Harness doesn’t even pretend to be credible. It has all the subtlety of a Viz cartoon. 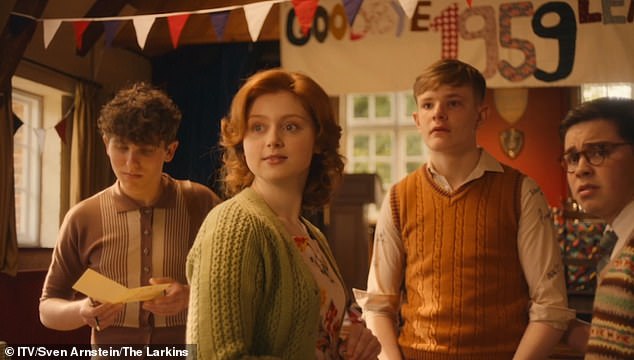 What’s the point of it? For the life of me, I cannot see why The Larkins (ITV) exists, or who is expected to enjoy it

Every character is flat as a cowpat, even Ma Larkin (Joanna Scanlan), which is ironic since her bosoms have been inflated to the size of a couple of barrage balloons.

The actors gurn, simper, bellow and squawk their way through every scene. Tony Gardner and Selina Griffiths as the social climbers Alec and Norma Norman are especially guilty. Barging into a dinner party uninvited, they shrieked their lines: ‘We’re completely solvent! We make excellent friends!’ It went well beyond absurdity and even further beyond any chance of raising a laugh.

There’s currently no Mariette: Sabrina Bartlett has left the show, and her replacement Joelle Rae has yet to appear. Peter Davison as the foul-tempered alcoholic vicar is never without a fag in his mouth, and that’s the whole of his performance: enter vicar, glug of whisky, swearwords, drag on cigarette, more swearing, exit vicar. 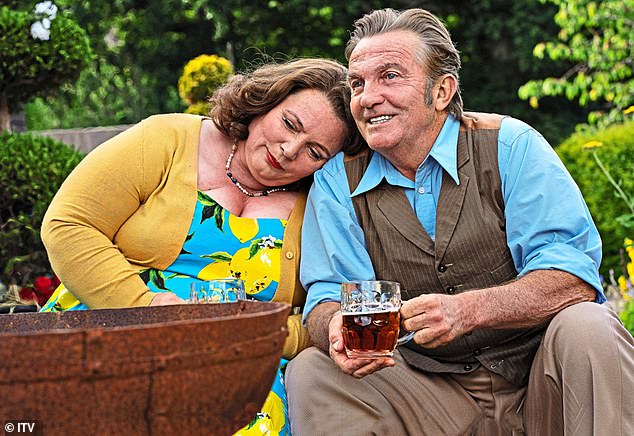 The remake with Bradley Walsh (right) playing Pop and his son Barney as the gormless PC Harness doesn’t even pretend to be credible. It has all the subtlety of a Viz cartoon

No one believes in the world of The Larkins, least of all the cast. Anything that looks like a joke is bloated until it collapses under its own weight. When Mr and Mrs Jerebohm (Julian Rhind-Tutt and Morgana Robinson) moved into the manor house, they took up shooting . . . blazing away at bottles on the lawn with shotguns.

‘We need living creatures to kill, daddy,’ declared daughter Blanche (Lucy Allix). In case we didn’t think this was funny the first time, she did the joke again five minutes later. By the end of the hour, the Jerebohms were loosing off machine guns into the sky like guests at a Taliban wedding.

But the only thing they slaughtered was the memory of those long-ago Darling Buds. This is no remake — it’s the murder of a much-loved national treasure.

A shotgun was the chief prop of weirdo dad Steve (Rory Keenan), in Somewhere Boy (C4). Each night before he returned home to the lonely cottage he shared with his teenage son Danny (Lewis Gribben), he smeared himself in blood before staggering through the door, gun in hand. 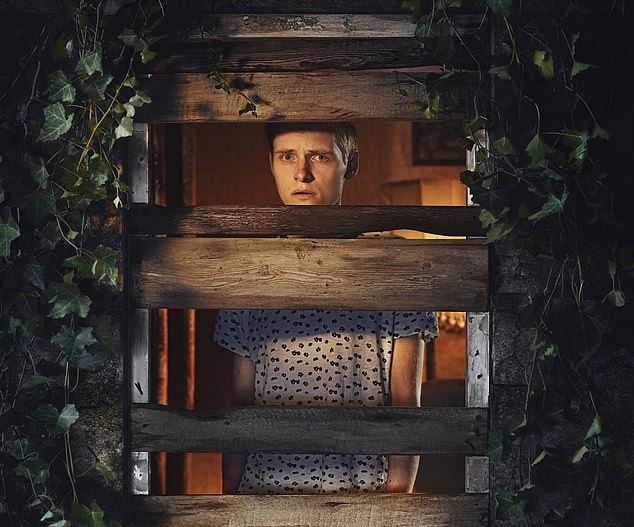 Danny (pictured) believed his dad spent every day fighting monsters, so he never dared venture outdoors — until the police came to take him away. If this set-up didn’t make much sense, the aftermath is even more muddled

Danny believed his dad spent every day fighting monsters, so he never dared venture outdoors — until the police came to take him away. If this set-up didn’t make much sense, the aftermath is even more muddled.

The idea of an innocent emerging from captivity has been done before, far better, in the Netflix series Unbreakable Kimmy Schmidt.

Somewhere Boy airs in double doses every night till Wednesday. We’ll have to hope a proper plot emerges, but it’s in hiding at the moment.

Confined space of the weekend: Long stretches of the Norwegian crime thriller Wisting (BBC4), starring Sven Nordin, were set in the back of a van as detectives tracked an escaped killer and bickered moodily inside the vehicle.