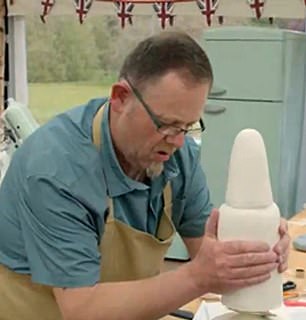 The Great British Bake Off: Channel 4

That’s near the knuckle! And I’m not talking about baker Michael’s pastry knife, which seemed to lop off part of a finger every time he lifted it.

It was the jokes that really cut to the bone as The Great British Bake Off (C4) returned. Judges and presenters dressed as The Wizard of Oz cast to launch the first episode, with Noel Fielding in a gingham dress as Dorothy and Paul Hollywood in a suit of silver cans, playing the Tin Man.

‘I don’t have a heart,’ Paul announced, quoting his character in the 1939 movie. ‘Yeah, that’s not going to come as a big shock to people,’ retorted Noel.

It sounded as though the kohl-eyed comedian was wading into the very public row over Paul’s private life, following the 53-year-old’s split from barmaid girlfriend Summer Monteys-Fullam, 24.

Notoriously touchy though he is, Paul didn’t even flinch. Is he suddenly immune to any jibes about his ex, who dumped him so noisily after he tried to have her sign a secrecy pledge (what the lawyers call a ‘non-disclosure agreement’)? The answer to this puzzle was dancing in the breeze outside the Bake Off marquee. The daffs were out… because this show started filming back in April, when thoughts of Summer still brought a warm glow to Paul’s face.

Ah well, cheer up, Baking Tin Man. If you don’t have a heart, you’ll never get your heart broken.

Week One of Bake Off, now stretched to 90 minutes, is always an exercise in getting to know the contenders, and this time the field is more crowded than ever, with 13 challengers. This was the cue for lots of comments about the Baker’s Dozen, though that old term for a clutch of 13 will mean about as much to most younger viewers as calculating the budget in guineas and groats.

Theatre manager Michael certainly made sure the camera noticed him. Every time he tried to talk while chopping, the knife sliced into a finger.

By the time he reached the afternoon round, three of his digits were swathed in plaster… and the next day he was wearing a plastic glove. Had he been fitted with a prosthetic hand overnight?

This is the youngest collection of bakers ever brought together for the show. Two of them, Jamie and Henry, were 20, and in contrast to previous years there were no older women and only one bloke who could even be called middle-aged. Judge Prue Leith claimed the producers were intent only on selecting 13 outstanding bakers: ‘They’re not set up to find somebody who’s the right ethnic mix, or the right height, or the right age or anything.’ 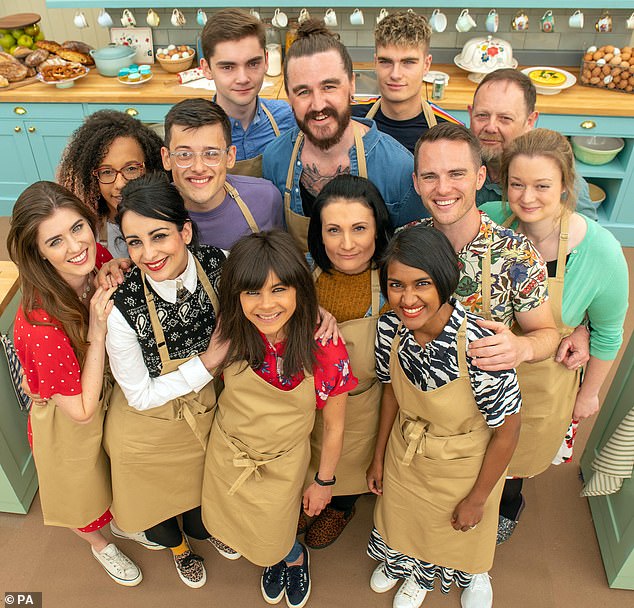 This is the youngest collection of bakers ever brought together for the show. Two of them, Jamie and Henry, were 20, and in contrast to previous years there were no older women and only one bloke who could even be called middle-aged.

Does she really believe that? It must strike her as odd to look around the tent and see that of the six women, the oldest is Helena who is 40 and the mother of a young daughter.

Essex truck driver Phil is 56, but we all know he’s not going to win or even make the semi-finals. There can’t be room for two 50-something working-class males on this show, not when one of them is Paul Hollywood. Being young, most of the bakers wanted to pay tribute to their grans, the standard trick of any reality show contestant trying to win over viewers. Steph, 28, went one better and announced her great-grandma Rose was looking over her. ‘I feel like she was there,’ she insisted. 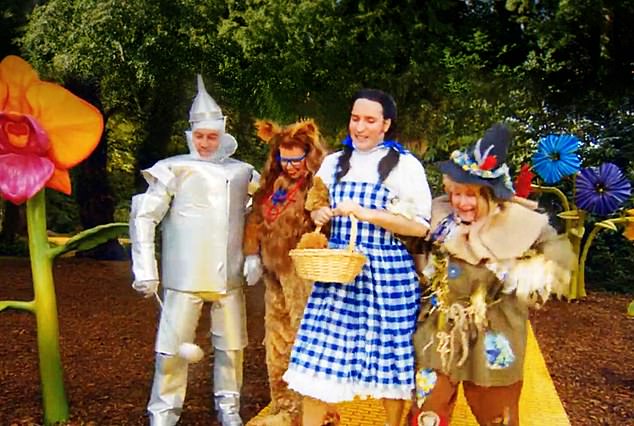 Dressed as the Tin Man in The Wizard Of Oz (left), the judge kicked off the new series of The Great British Bake Off last night with a fitting quote: ‘I don’t have a heart’

Supernatural or not, the cakes were looking spookily good, with show-stoppers that included a pirate’s treasure chest overspilling with gold bars, a tropical island with a sugar waterfall and a fairground ride. The standard of cakes this year is clearly going to be exceptionally high: No baking for beginners here.

English Lit student Henry proved himself an old soul by tackling a 400-year-old recipe known as ‘wood cake’. If he was hoping any 16th century ancestors, his great-times-ten grandmas perhaps, were looking down on him, Henry was out of luck: The intricate icing decoration he created to top his wood cake collapsed when he picked it up.

Fellow youngster Jamie was struggling, too. He forgot to add his eggs to the batter mix. The camera let us know, with a zoom on to the bowl of eggs, accompanied by the clang of a bell. That’s the unmistakeable sound for high drama in BBC1’s gangster series Peaky Blinders.

You could almost expect Paul to pull a razor from his quiff and warn, ‘Don’t leave out the eggs… by order of the Peaky Bakers’.