8 Days: To The Moon And Back

Half a century ago it seemed a mechanical miracle that we could send men to the Moon. Today, the marvel is that we achieved so much with technology long regarded as obsolete — such as magnetic audio tape.

Eight Days: To The Moon And Back (BBC2) told the breath-taking story of the Apollo 11 mission in July 1969, based on sound recordings of the three astronauts’ voices, made in the lunar modules during their space trek.

A couple of soundbites captured from Mission Control have become two of the most famous phrases in the language. First, Neil Armstrong declared: ‘The Eagle has landed,’ as they touched down, and then, a few hours later: ‘One giant leap for Mankind.’ 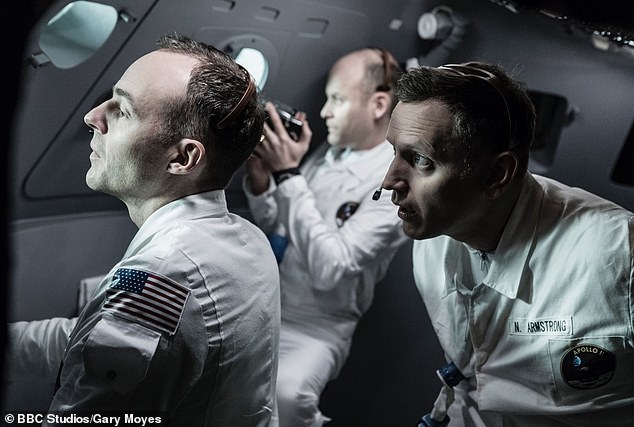 Eight Days: To The Moon And Back (BBC2) told the breath-taking story of the Apollo 11 mission in July 1969, based on sound recordings of the three astronauts’ voices, made in the lunar modules during their space trek

So it is astonishing to discover that all exchanges between Armstrong, Edwin ‘Buzz’ Aldrin and Michael Collins were taped, and have scarcely been heard since. Perhaps Houston had the same problem as the rest of us with old cassettes — we’ve got nothing to play them on.

Someone at NASA must have gone up into the attic to drag down a faulty old reel-to-reel, because the quality of the sound varied from incomprehensible to crystal clear. Sometimes it seemed as though the astronauts were sitting beside us. Collins’s heartfelt exclamation as he watched the sun rise over a distant Earth gave me shivers: ‘God damn, that’s pretty!’

The audio was matched to convincing reconstructions of the mission, featuring actors uncannily like the real astronauts, lip-synching to the tapes.

‘They are not naturally talkative men,’ Walter Cronkite of CBS News warned us in a clip from the original TV coverage. But Cronkite himself, normally the most fluent of reporters, was reduced to tear-streaked silence as he watched live pictures from the Moon’s surface.

That footage remains uniquely powerful. What has been forgotten in the intervening 50 years is how perilous the journey was, and how often the world held its breath — when we lost radio contact, as the capsule orbited on the dark side of the Moon, and when it seemed the module would be stranded, unable to return … until Aldrin flipped a broken switch with the nib of a felt-tip pen.

In the control room, scientists chain-smoked cigarettes and puffed constantly on pipes. It’s a surprise they could see their screens. But this sublime documentary revealed much more than high drama.

Equally moving was the detail that Aldrin took a piece of Holy Communion bread from his church, so that he could participate in Sunday worship, a quarter of a million miles from our planet.

If we could do so much with comparatively primitive tech, how come we seem powerless now? The depressing answer was supplied by a stilted one-off drama, The Left Behind (BBC1) — these days, all the world’s problems are Someone Else’s Fault. 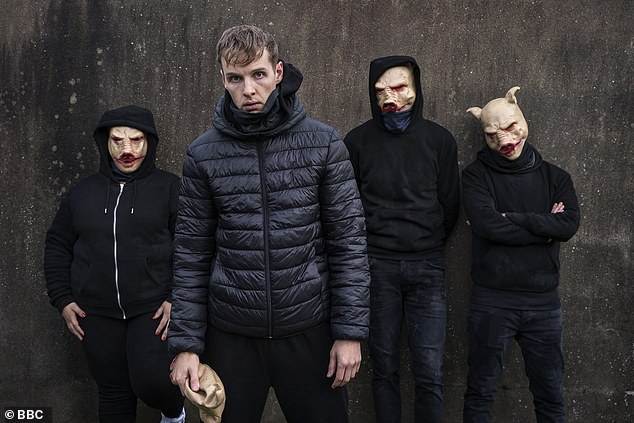 We were meant to feel sympathy for Gethin (Sion Daniel Young), a Cardiff teenager who dossed on his sister’s sofa, and, when he did get a rare shift at a fried chicken shop, turned up late with a mouthy attitude (pictured: The Left Behind)

We were meant to feel sympathy for Gethin (Sion Daniel Young), a Cardiff teenager who dossed on his sister’s sofa, and, when he did get a rare shift at a fried chicken shop, turned up late with a mouthy attitude. The world owed him a living, he thought.

Gethin took his vengeance by donning a plastic pig’s mask and burning down a halal butcher’s shop. The rest of the time, he took drugs or sat in the pub with his mates, spouting dialogue that was apparently cut-and-pasted from a pamphlet from Corbyn’s Labour Party.

If that’s the typical attitude these days, small wonder we no longer dream of going to the Moon.