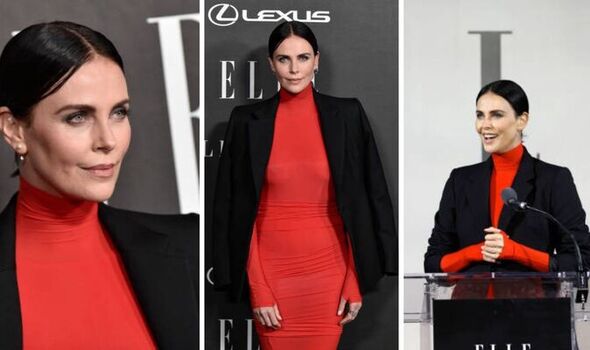 The event took place at The Getty Centre in Los Angeles.

Charlize Theron, 47, stunned as she made a style statement while attending the 29th annual ELLE Women In Hollywood event. The event took place in The Getty Centre in Los Angeles on Monday, and Charlize did not hold back when showing off her bold style.

She could be seen on the stage among the likes of Anne Hathaway and Hailey Bieber.

Her decision to wear the red pants underneath the red dress appeared to be a nod to early 2000’s fashion.

To finish, her makeup was complete with layers of bronzer, a lined eye and a glossy nude lip.

Charlize Theron previously spoke about her career and fame

During an interview with Harper’s Bazaar, she said she wasn’t interested in more fame than she has now.

Charlize Theron said she has never had “that much” fame

She said: “I’ve never been one of those people that’s at a Kim Kardashian level.”

She could be seen hugging Michelle Yeoh and Olivia Wilde.

Charlize Theron showed up at the Elle Women event

The event aims to shine a spotlight on some of the brightest women in the industry.