Five years ago, in Guillermo Del Toro’s Oscar-winning The Shape Of Water, Sally Hawkins played a mute who fell in love with a kind of monster, a humanoid amphibian, more prosaically described as half-man, half-fish.

She was deservedly nominated for an Academy Award and in The Lost King she gives another wonderful performance, again as a woman reduced, in this case by the debilitating condition ME, who again falls for a monster: King Richard III.

But just as in The Shape Of Water, the Hawkins character wants the world to know that the object of her obsession is monstrous only by misperception. Richard III, she thinks, has been dreadfully maligned, above all by William Shakespeare. 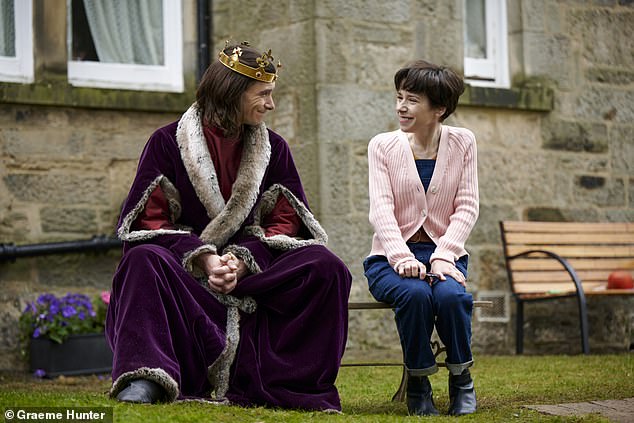 The implication is clear: Philippa might just be a middle-aged divorcee trapped in a dead-end career, but she identifies with this 15th-century monarch as, it seems, he does with her

So when she learns that the Plantagenet monarch’s mortal remains are ‘lost to history’, she embarks on a mission to find them. And as you will recall, for much of this really happened, find them she does . . . beneath a council car park in Leicester.

Philippa lives in Edinburgh, where she works in a dreary sales job and is passed over for promotion. ‘You are at the right level for you,’ says her condescending boss.

When she then goes with her son to watch a production of Shakespeare’s Richard III, she feels as though the King is talking directly to her. From then on, the stage version of Richard (Harry Lloyd) starts coming to her in visions, a device that could feel wincingly arch, but director Stephen Frears makes it work.

The second half of a glorious double-bill of golden oldies, which begins with Robert Donat in The 39 Steps, this is the thriller that propelled Hitchcock to Hollywood. Dated, of course, but still sublime.

And the implication is clear: Philippa might just be a middle-aged divorcee trapped in a dead-end career, but she identifies with this 15th-century monarch as, it seems, he does with her.

Moreover, while history aligns with the Shakespeare version of Richard as a malignant, murderous hunchback, she finds that he was an advocate for the printing press and also introduced the principle of innocence until proven guilty. Every time she visualises him, it is as a handsome man on horseback. She is adamant that he was not deformed.

Off she duly goes to Leicester to find the telltale bones, recruiting a sympathetic lecturer (James Fleet) to the cause and eventually persuading the chief archaeologist at the university (Mark Addy) to let her dig.

However, it is the academics who become the villains of the piece by seizing the credit when, wonder of wonders, the skeleton under the car park does indeed turn out to be Richard.

I should add that Leicester University have strongly denied they sidelined Philippa during this remarkable project, and the screenplay certainly injects the truth with a good dollop of fiction, but then there’s something rather fitting about that. After all, we’re asked to believe Shakespeare did, too.

Whatever the accuracy of it, this is an engaging feelgood picture in which even Philippa’s footwear during the excavation, Union Jack wellies, compounds the sense of a doughty Englishwoman at war with the establishment.

There are also echoes of Philomena (2013), made by the same team of Frears, Coogan and Pope. Judi Dench picked up lots of award nominations for that film, and I suspect the brilliant Hawkins will, too, for The Lost King. In honour of Richard, or maybe not, let’s call it a hunch.

The Woman King also tells a true story, that of a regiment of fierce female warriors in the African kingdom of Dahomey, now a region of Benin, in the 1820s. 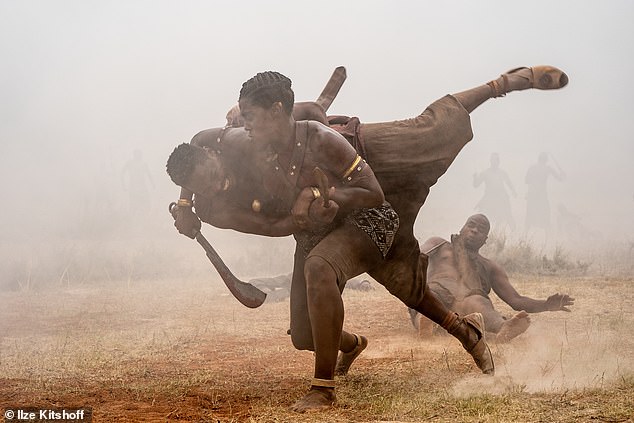 The appeal of this film, directed by Gina Prince-Bythewood, derives entirely from its reversal of gender assumptions

Viola Davis plays their fearless general, Nanisca, quite prepared to lay down her life in the service of a rather complacent sovereign (John Boyega), and similarly prepared to use her long nails to pop out the eyeballs of her enemies.

She’s almost as tough to those on her own side, but sees something of her young self in a new recruit, Nawi (Thuso Mbedu), cueing up a tale of virtuoso and apprentice that we have seen a thousand times before in the cinema, only never quite like this.

The appeal of this film, directed by Gina Prince-Bythewood, derives entirely from its reversal of gender assumptions. If it were about male soldiers, it would seem thoroughly derivative, if not irrelevant. As it is, it’s about prime Amazons and altogether in tune with our own times.

Verdict: Too wacky by half

Early in the 1930s, a cabal of powerful American industrialists plotted to overthrow President Franklin D. Roosevelt. Admirers of Hitler and Mussolini, they wanted to make a popular war hero, General Smedley D. Butler, the leader of their coup.

What a shame, then, that Russell has chosen to make an unabashedly quirky comedy of his heavyweight tale. One, moreover, that lasts well over two hours.

I loved his 2013 film American Hustle, which also starred Bale (and an uncredited De Niro), was also a comedic interpretation of a true story and also seemed to last about the length of a short holiday. 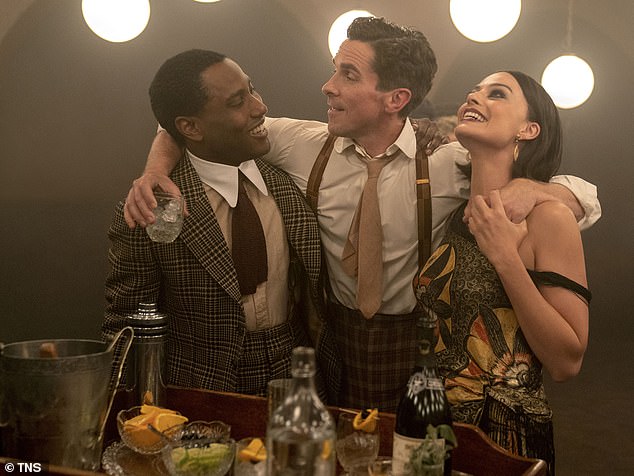 Pals: Washington, Bale and Robbie. It’s just all too wacky and whimsical for its own good, the kind of film in which those in it seem to be having a bigger hoot than those of us watching, making it a waste not just of a tip-top cast, but also of a cracking yarn

But this time Russell lets his imagination run away with him, and, worse, run rings around his audience. I’d have cheerfully settled for a political thriller, a film noir or a tongue-in-cheek caper. What makes Amsterdam so convoluted, and ultimately tiresome, is that it tries to fuse all three.

Still, there’s no faulting the acting. The setting is New York City, 1933, but flashbacks show us how Burt (Bale), a half-Jewish doctor packed off to the Western Front by his wife’s snobby parents, a black soldier called Harold (Washington), and Valerie (Robbie), a nurse, became friends at the end of World War I.

The two men were maimed in battle; Burt lost an eye. But Valerie knew people in Amsterdam who could source a prosthetic. A devoted alliance was formed.

By 1933, Burt has a medical practice treating fellow veterans, in partnership with Harold, a lawyer. Then the daughter (Swift) of their much-loved wartime commander, who has died suddenly, asks Burt to perform an illicit autopsy on him, believing he has been poisoned. Soon she is dead too, part of a sinister cover-up that appears to reach into the highest echelons of New York society.

Malek and Taylor-Joy both have fun as an extravagantly rich married couple, while De Niro plays the general (based on Smedley Butler) whose rock-solid integrity, with the help of our determined trio, eventually undermines the dastardly fascist plot.

There are a handful of pleasures while all this plays out. Bale makes the most of his character’s glass eye and treats us throughout to a lively Al Pacino impression. Robbie is terrific, as usual.

And Russell makes no attempt to conceal the parallels between his story and that of another American business titan who challenged the democratic process (albeit that Donald Trump was still President at the time).

But it’s just all too wacky and whimsical for its own good, the kind of film in which those in it seem to be having a bigger hoot than those of us watching, making it a waste not just of a tip-top cast, but also of a cracking yarn.

Vengeance (15, 107 mins, ***) has a decent fish-out-of-water comic premise, unevenly executed, but on the whole it represents a promising directorial debut for B.J. Novak, who also starred in and co-wrote the acclaimed American version of The Office.

He plays the lead character, a rakish New York journalist, Ben Manalowitz, whose promiscuous city lifestyle does not extend to remembering women after he has slept with them.

One such was Abi, from a remote Texan town, whose brother Ty (Boyd Holbrook) calls him to break the terrible news that she has died.

Ty thinks that Ben was Abi’s boyfriend and wants him to come out to Texas, to help him pursue his theory that his sister may have been murdered by a Mexican drug lord. When Ben realises that the story might make a decent podcast, he agrees to help.

Some of this is very funny, sometimes the comedy feels forced, and sometimes, not entirely successfully, it is abandoned altogether. Cautiously recommended.

Catherine Called Birdy (12A, 108 mins, ***) is another comedy and indeed another feature-length debut as director and writer, in this case for Lena Dunham, creator of the hit TV show Girls.

It’s an adaptation of Karen Cushman’s ‘young-adult’ novel of the same name, about a 14-year-old girl, Birdy (Bella Ramsey, from Game Of Thrones), growing up in medieval England. It might remind older viewers of the long-ago TV comedy Up Pompeii in the jaunty way it sends up its historical setting. But then it’s not really intended for anyone who remembers Up Pompeii.

Some of the scatological humour is feeble by anyone’s standards, but there’s no faulting the cast, nicely led by Ramsey, who is ably supported by, among lots of familiar faces, Andrew Scott, Billie Piper, Joe Alwyn and Sophie Okonedo.

Even Russell Brand gets a blink-and-you’ll-miss it cameo. My advice is to blink.

Vengeance is in cinemas. Catherine Called Birdy is available on Amazon Prime Video.