Tori Spelling, 46, found herself in an uncomfortable situation while on Fox 5 NY with her BH 90210 costar and best friend, Jennie Garth, 47.

During the interview, Spelling was asked by beloved New York journalist Rosanna Scotto about her ongoing money troubles, in which the star wasn’t too thrilled to open up about. 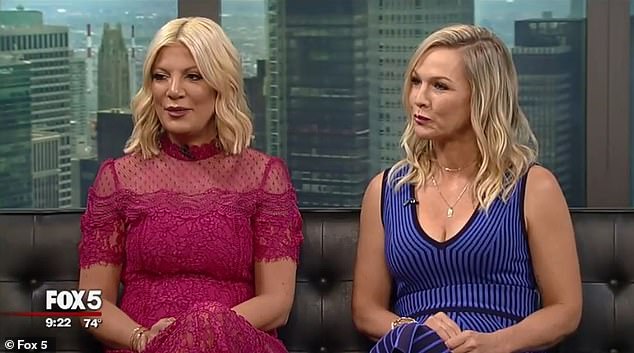 Uh-oh! Tori Spelling found herself in an uncomfortable situation while on Fox 5 NY with her BH 90210 costar and best friend, Jennie Garth 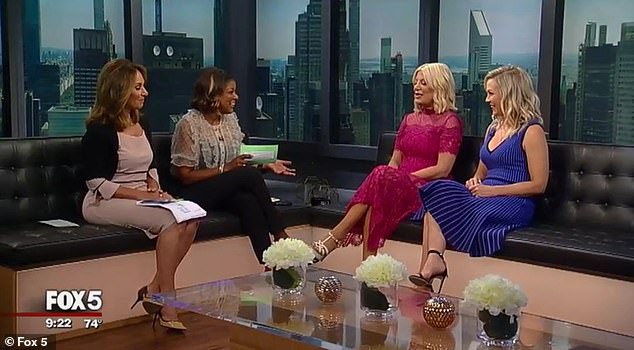 ‘But Tori, it’s got to hit a little close to home when they start talking about financial problems, right?’ the host asked.

‘That was a choice that I made and we made together to put that in there,’ she said looking over at Jennie.

‘That’s such speculation and the media loves to talk about it,’ she said of her troubles. ‘So we were like, let’s face them straight on and let’s put it in there.’ 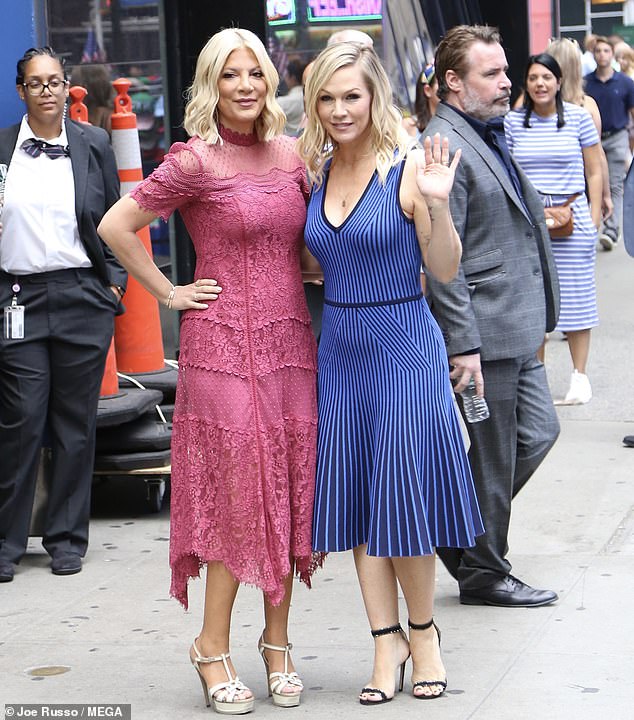 Press tour: Tori and Jennie smiled while out in New York as they continued their press tour

And then the bold question came when the anchor asked if the author was in fact experiencing financial troubles.

‘That’s appropriate,’ Spelling mumbled to herself as the anchor kept talking before bluntly asking, ‘Are you able to pay your bills?’

‘Am I able to pay my bills? Yeah, thank you. I am,’ she said with a reassuring head nod. 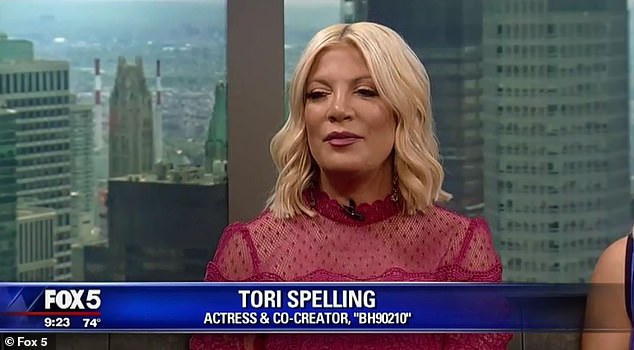 Not having it: ‘Am I able to pay my bills? Yeah, thank you. I am,’ she said with a reassuring head nod after being asked a blunt question

But it didn’t stop there. The anchor continued with another hard hitting statement.

‘And this show will obviously give you some money in your pocket right?’

Tori looked stunned over the question as her costar let out a nervous laugh before saying ‘interesting.’

Spelling had a quick way out and said to her friend that she would use this kind of content on the show. 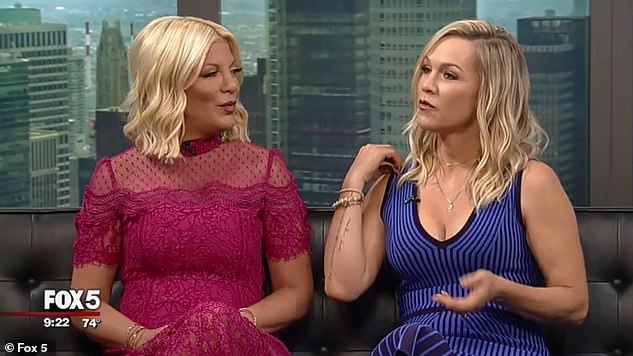 Quick thinking: Spelling had a quick way out and said to her friend that she would use this kind of content on the show

While the group of women seemed to move on from the interview, a clip played of the reboot. But it seems as though the mics came on a little early and Spelling was heard saying ‘it’s okay, I’m used to it,’ to Jennie before the shot opened back up to the interview.

At the end, the anchor apologized about ‘offending’ her in which Tori replied that she ‘has pretty thick skin.’

As a result of the constant media scrutiny, Spelling seemed to downplay the situation. 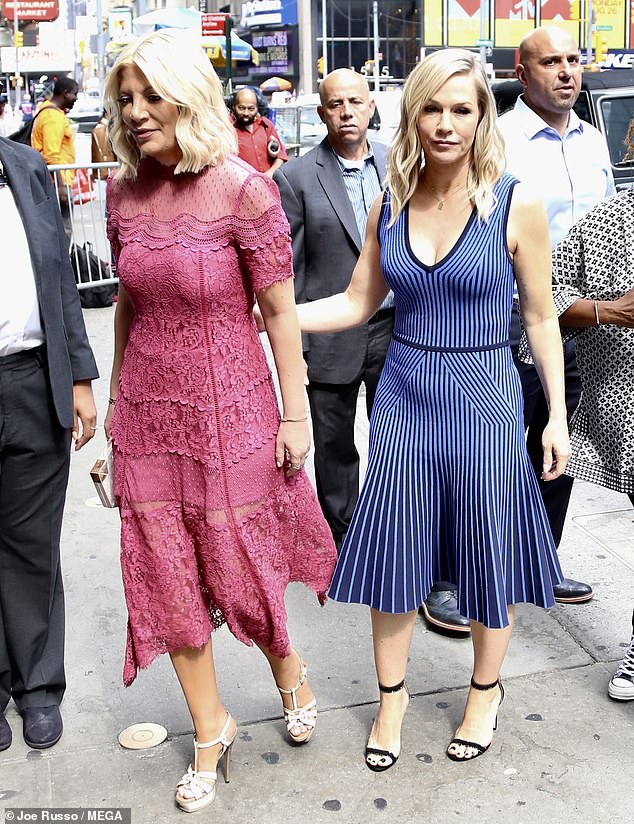 Good friend: Garth wasn’t having it as she helped her friend inside after the awkward television interview

In 2016, she was sued by American Express for failure to pay off her debt of $37,981.97. The couple was forced to move out of their home and into a smaller one with their kids to make it more affordable.

In 2014, her mother, Candy, revealed that her daughter did indeed have trouble managing her money.

Her daughter, while seemingly struggling for work and to pay their bills after getting a three-day eviction notice signed on to star in the show VH1’s True Tori, where she opened up about her ongoing issues with her husband Dean McDermott and also went to star in the ABC Family comedy, Mystery Girls. 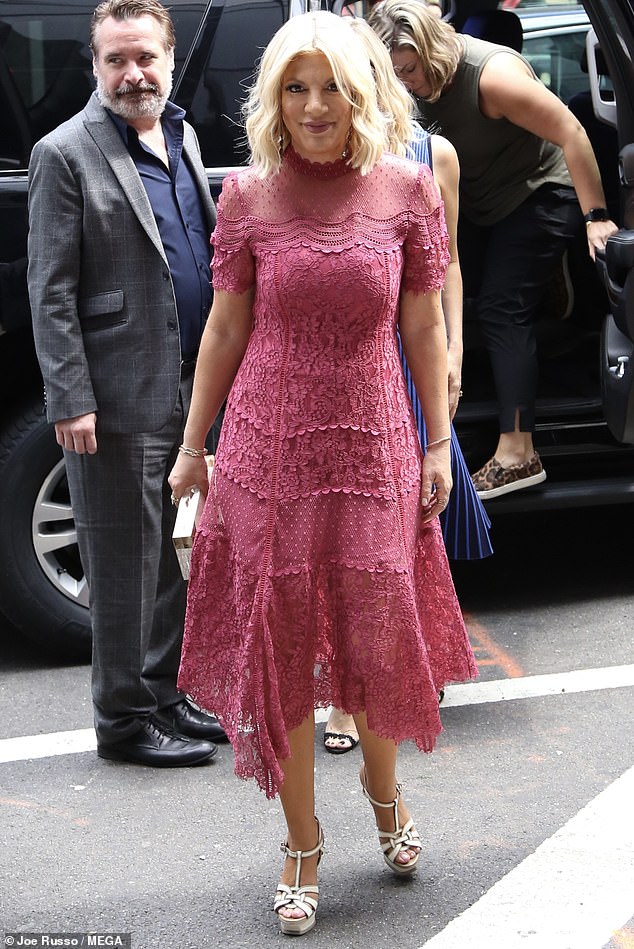 Looking good! Tori wore a rustic red lace dress that stopped mid-length as she stepped out in New York

‘I feel so responsible for so many people and I can’t do it. [I can’t handle] the responsibility of having to take care of so many people financially, the fear of that. [It] doesn’t matter. I know people look at me and they’re like, ‘Oh, poor you.’ Like, ‘Boohoo, you have so many problems,” she revealed while on True Tori.

‘But ‘we live paycheck to paycheck!’ she admitted.

‘After this [show] I have no f**king idea if work’s going to come in. Like, how am I going to support my family in six months? Look at the life we’re leading. We’re paying for five f**king private schools.’