After a year of largely virtual award shows, it seems some of Hollywood’s best and brightest have become a little rusty in the fashion department.

And Addison Rae, Leslie Jones and Jurnee Smollett were just a few celebrities who garnered attention for all the wrong reasons at the 2021 MTV Movie & TV Awards held in Los Angeles.

The TikTok darling, 20, tried to shed her largely ‘good girl’ image as she turned up to the red carpet in a midriff-baring ensemble with a sheer top designed by Christopher Esber.

But her attempts at a daring look seemed to be overshadowed by the outfit’s strange proportions, as she modeled a low rise black skirt and a tiny bralette that looked prone to a revealing wardrobe malfunction.

To make matters more complex the floor length black skirt was adorned with a decorative chain link belt around her bare stomach, and she tried to add a touch more modesty with a blazer on top.

And the fashion faux pas on her end just seemed to continue as she later slipped into a dress that looked like it would hang near the window at one’s grandmother’s house. 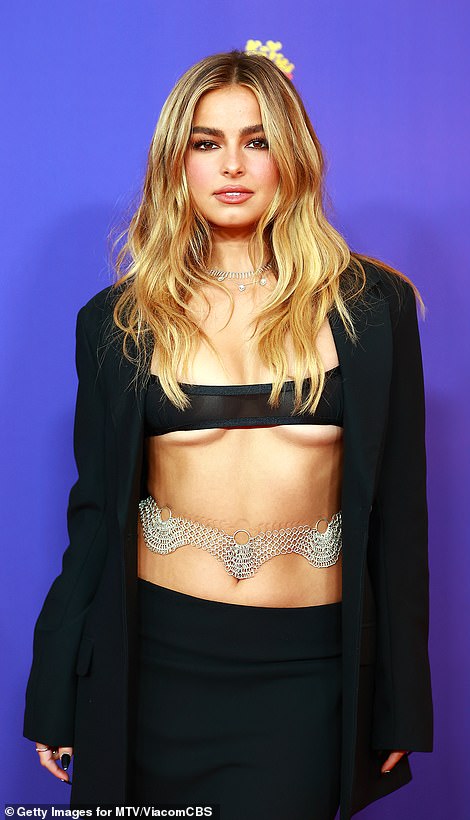 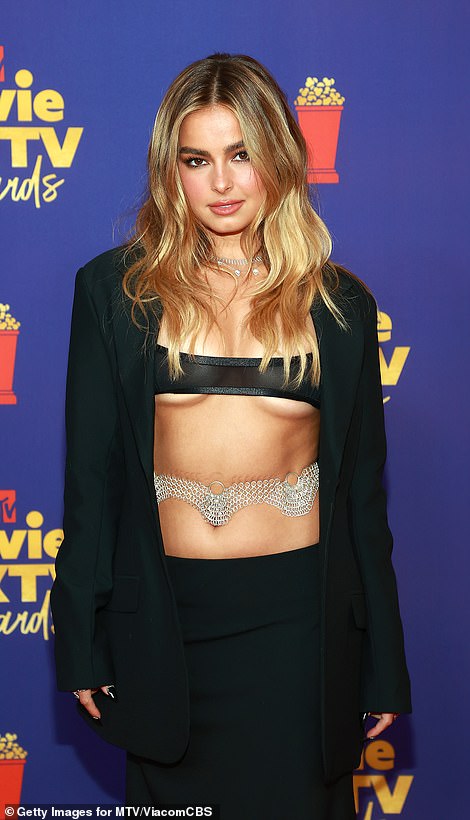 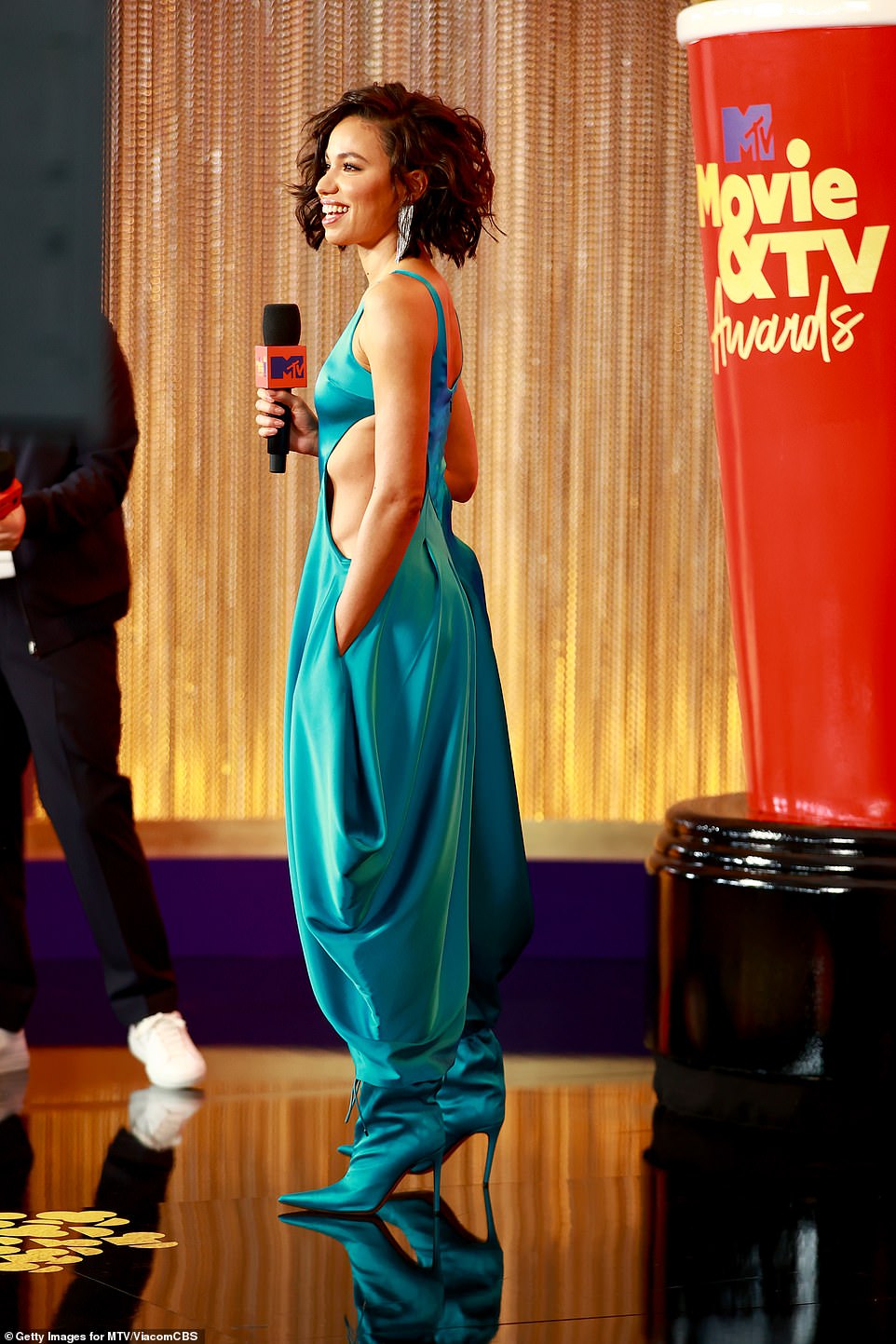 Taking us on a Jurnee: The star was hard to miss in this satin romper that came with matching boots 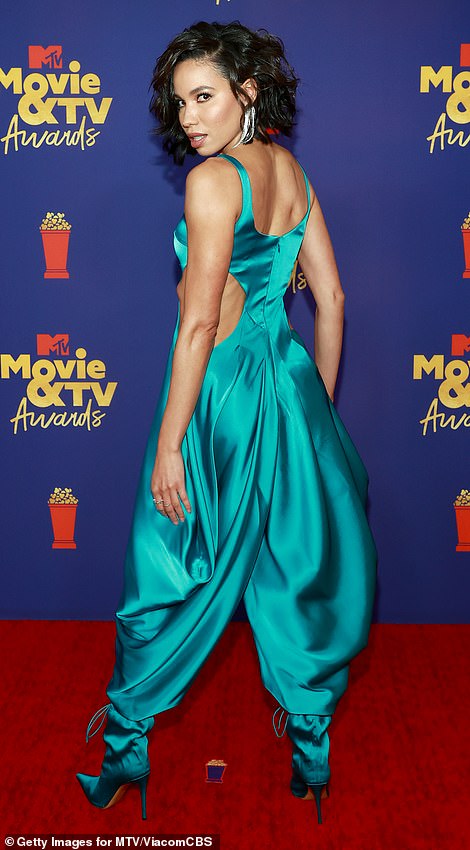 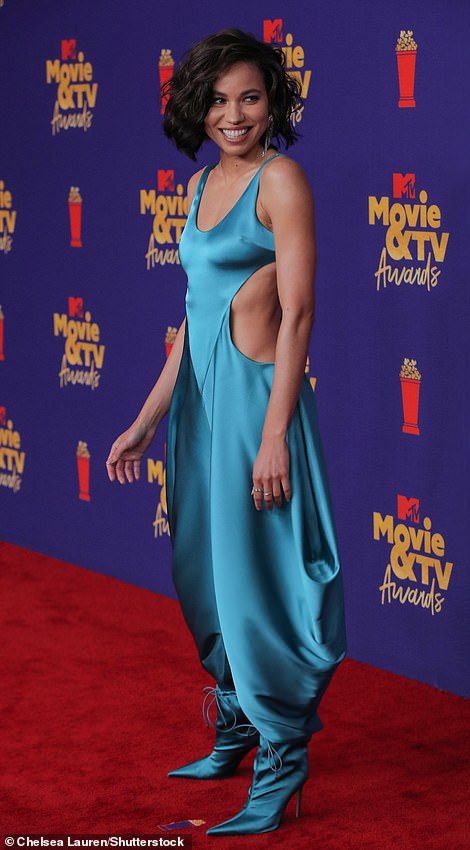 Cut it out! Jurnee’s romper was paired with slouchy heeled boots of the same silky turquoise material as she did a 360-turn on the red carpet 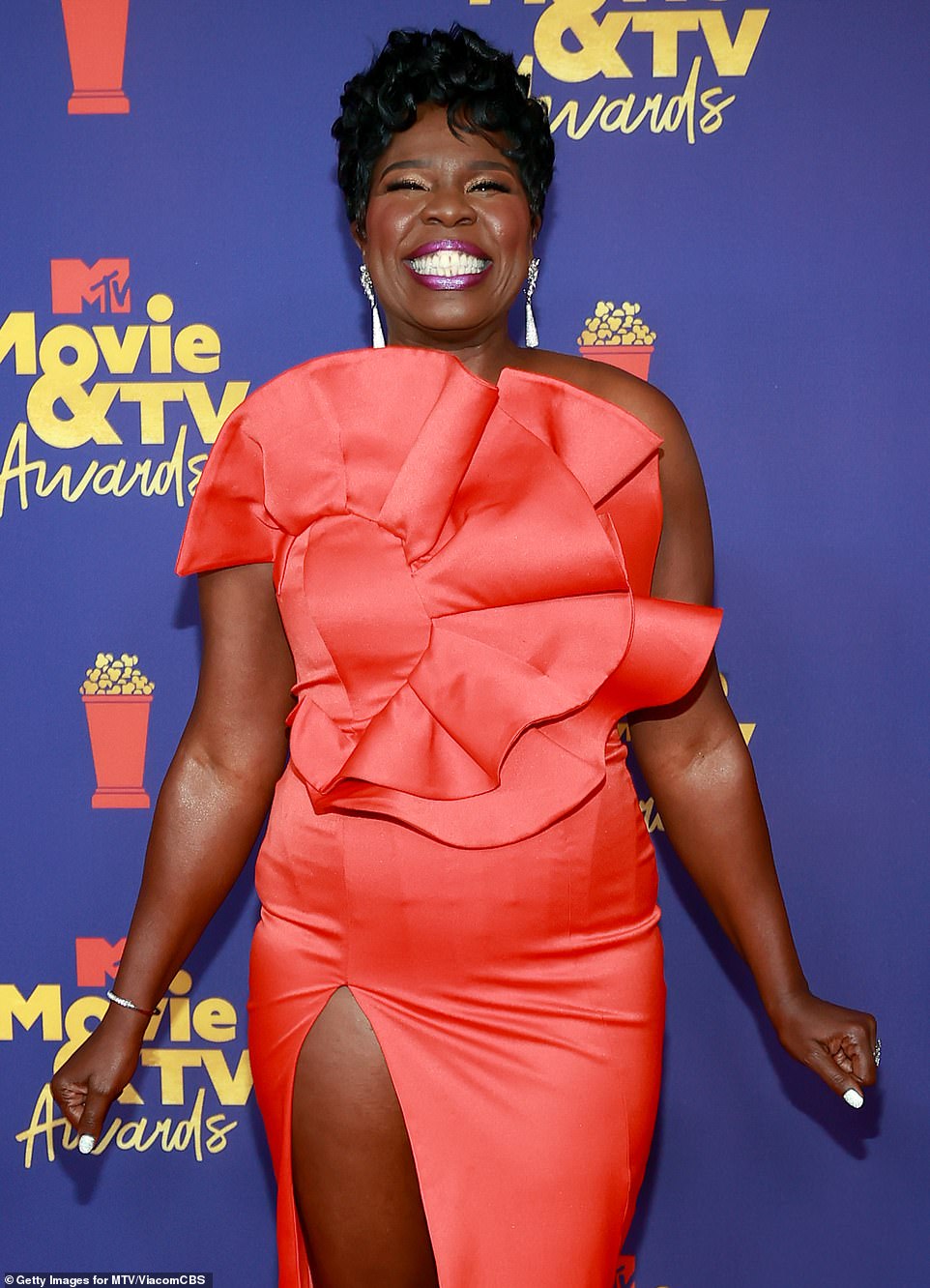 Doing too much: Jones tried to lead with glamour but looked more like decorative wrapping as she showed off a coral dress with a high slit and an overwhelming swirl detail

Jurnee, 34, who has received praise for her role in Lovecraft Country seemed to shine better on-screen than on the red carpet.

The actress was seen in a turquoise jumpsuit designed by Alexandre Vauthier that featured rather large parachute pants and cutouts on the side. She played up the silky monochromatic look with a matching pair of slouchy heeled boots.

And Jones, 53, who was tapped as host for the evening, tried to lead with glamour but looked more like decorative wrapping as she showed off a coral dress with a high slit and an overwhelming ruffled swirl detail.

Lisa Marie Presley’s daughter Riley Keough, 31, aroused visions of Christmas as she showed up in striped red and green sequined pants with a purple crop top and sparkly short sleeved jacket all designed by Gucci. 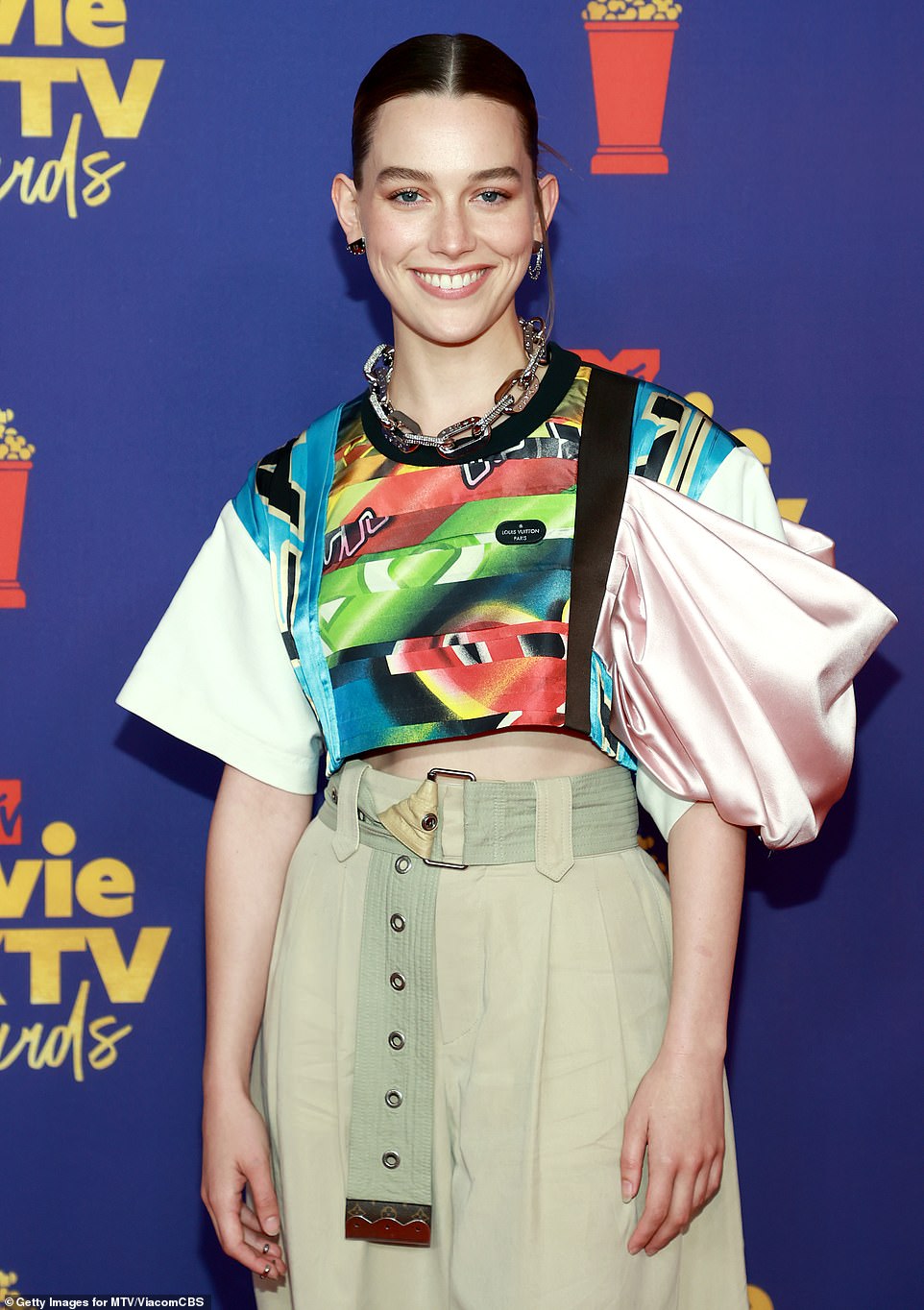 Self-fashioned? You breakout star Victoria Pedretti, 26, wore a top that looked like she had handcrafted it herself, as she showed up to the event in a patterned crop top with a bulbous pink ruffle on just one arm

Baggage: The young star’s outfit certainly came with a lot of bells and whistles and was overall a very busy ensemble with too much going on 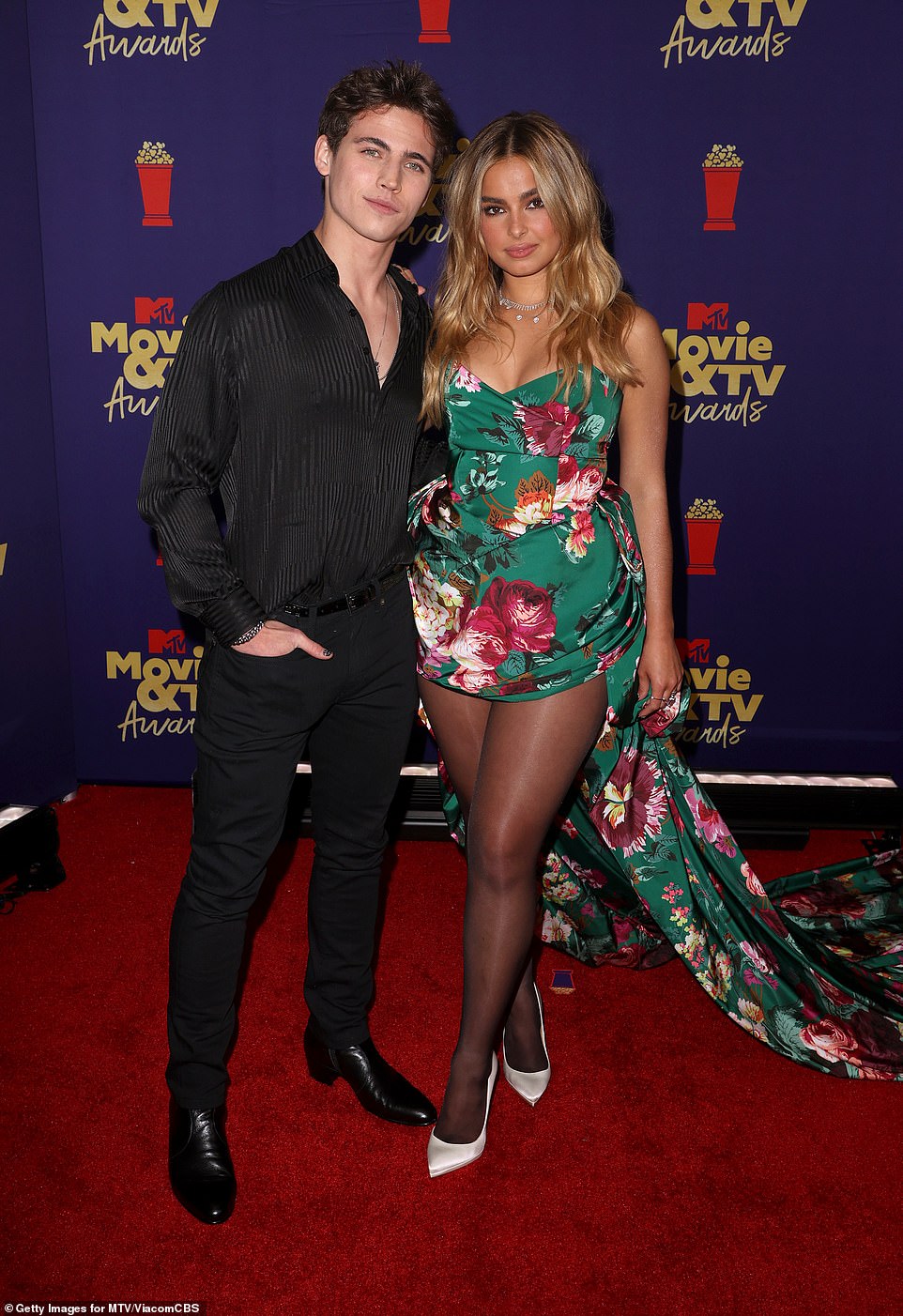 Curtain call? Addison’s  fashion faux pas seemed to continue as she later slipped into a dress that looked like it would hang near the window at one’s grandmother’s house

Red alert! Chase Stokes was a hot mesh in red, while To All the Boys author Jenny Han brought some major prom vibes to the red carpet

The less than subtle look donned by the Zola actress was further accentuated with whacky blue eyeshadow and silver heels with colorful bangles, and her hair was slicked back into a braided ponytail.

You breakout star Victoria Pedretti, 26, wore a top that looked like she had handcrafted it herself, as she showed up to the event in a patterned cropped T-shirt with a bulbous pink ruffle on just one arm.

The Netflix darling paired the eye-sore of a shirt with khaki trousers that looked sizes too big for her tiny frame and slid her feet into a pair of black and white platform loafers.

Missing the mark: Both actors turned up in outfits that did not scream red carpet ready 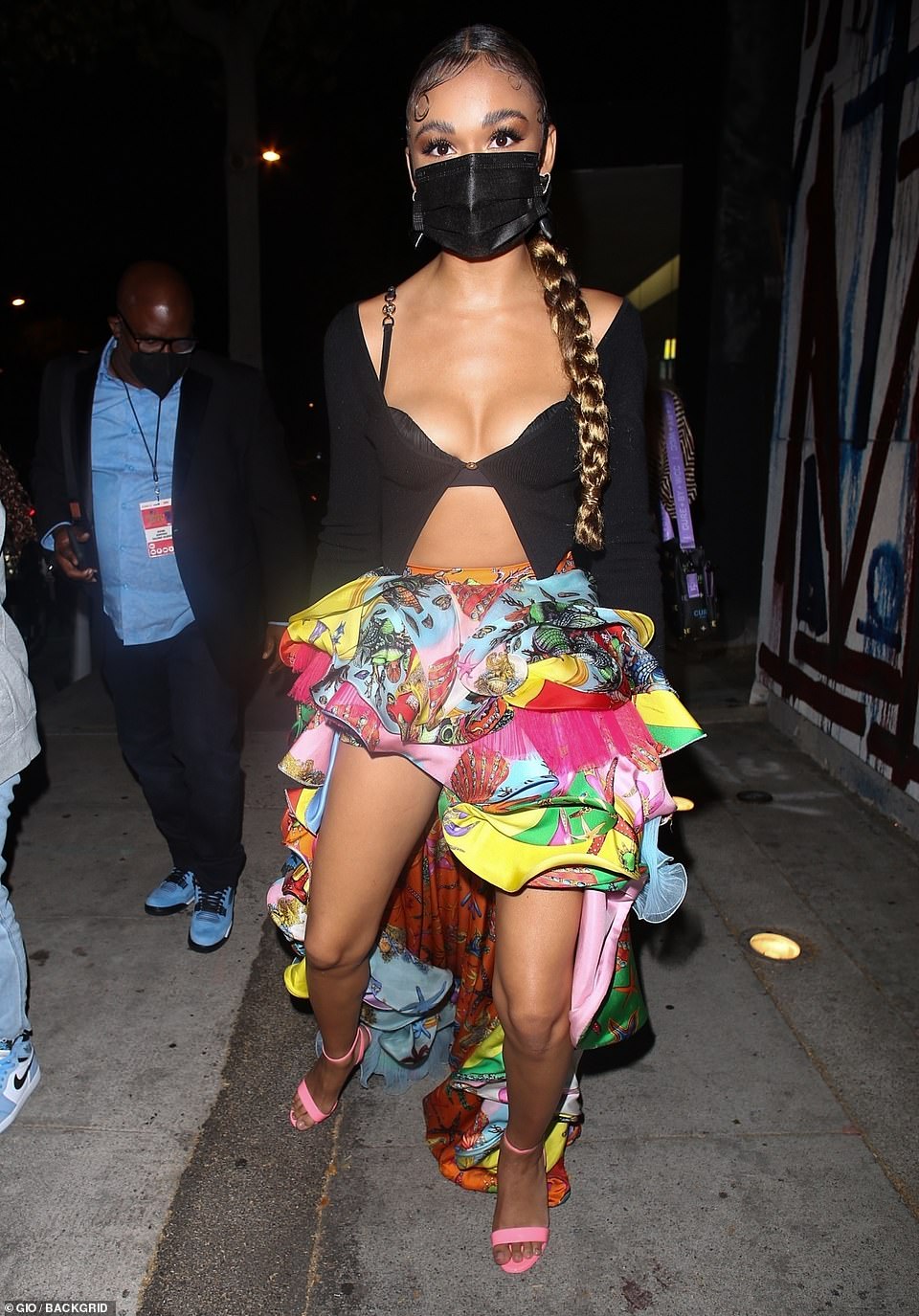 Shock edit: Madison Bailey’s ensemble looked slightly mis-matched after the show, as she was seen arriving at Craig’s in West Hollywood

Judas and the Black Messiah

To All the Boys: Always and Forever — WINNER

BEST PERFORMANCE IN A MOVIE

Sacha Baron Cohen: The Trial of the Chicago 7

Maitreyi Ramakrishnan & Jaren Lewison: Never Have I Ever

Anthony Mackie: The Falcon and the Winter Soldier — WINNER 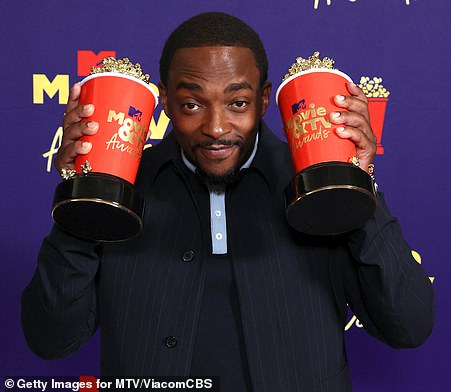 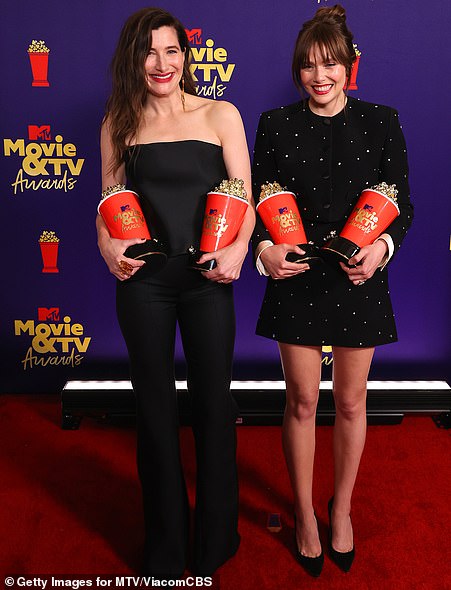 BEST PERFORMANCE IN A SHOW

Michaela Coel: I May Destroy You

Simona Brown: Behind Her Eyes

Outer Banks star Madison Bailey also seemed to go off book with her outfit as she strolled the red carpet in a rather chaotic atelier Versace look that included a midriff-baring black cardigan and ruffled skirt with clashing patterns.

And Crazy Rich Asians actor Henry Golding, 34, looked more like an extra in the Grease movies as he wore a vinyl black jacket with a white T-shirt and a pair of very high waisted trousers by Dior.

Formerly known as the MTV Movie Awards, the annual show sees winners presented with the “golden popcorn” statue and has traditionally been tied to the start of the summer blockbuster season for the film industry.

The award show did not include accolades in Television until 2017 and the entire production was cancelled last year due to lockdown restrictions, later airing a Vanessa Hudgens’ hosted one-off ‘Greatest of all time’ special in December. 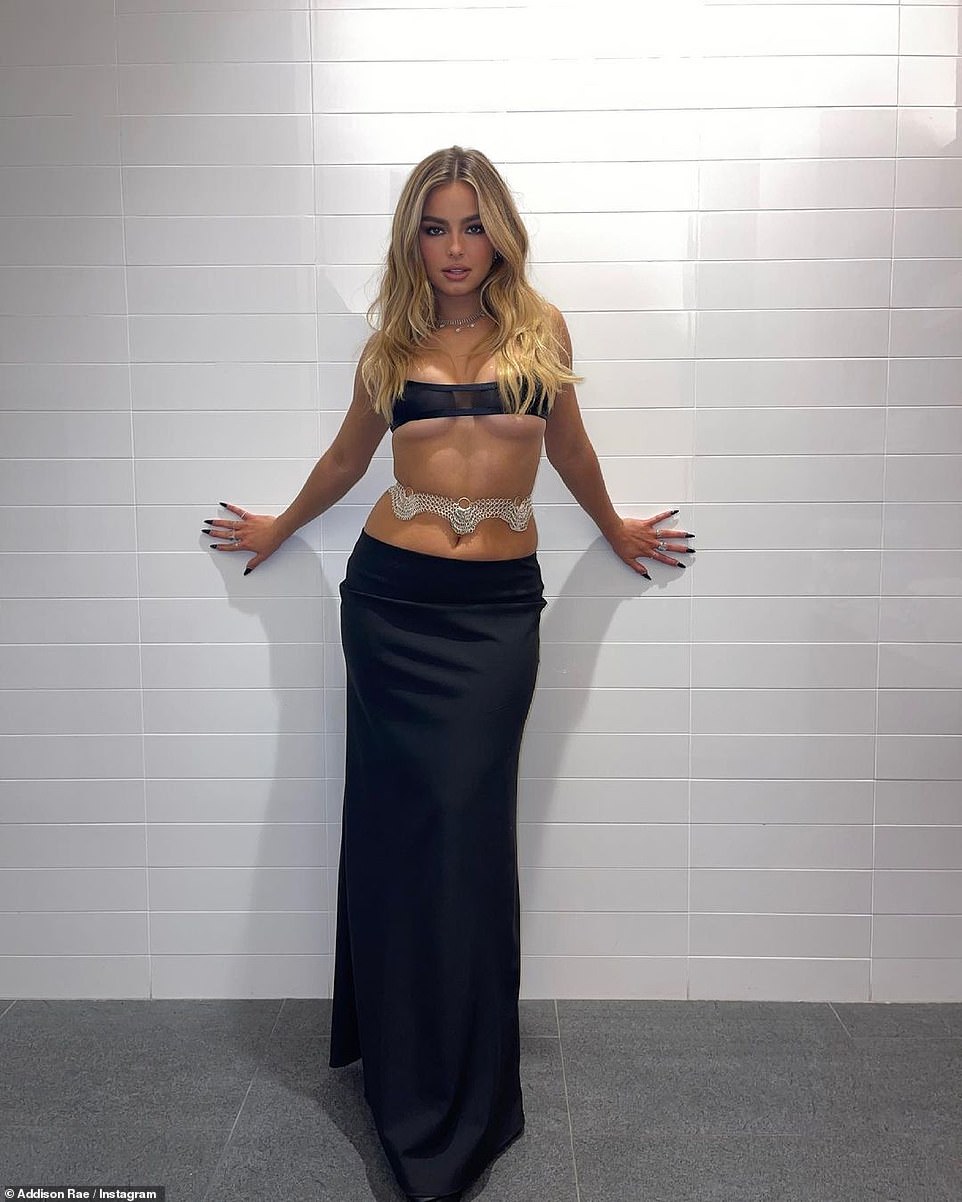 Closeup: Addison continued to show off her racy outfit with a series shot against what looked to be a bathroom wall