A ‘death match’ where two blood-soaked wrestlers attacked each other with a garden strimmer and glass in front of children is being investigation by police.

Children can be seen staring in shock as blood trickles down the wrestlers while they beat each other with glass lighting tubes and wooden sticks.

The Colliery Championship Wrestling event was billed as a ‘Pits of Punishment’ fight and offered a family discount for parents wanting to bring their children.

But members of the audience were left open-mouthed and gasping, with some even moving away from the violence and try to get to the back of the room.

One of the wrestlers has since admitted they ‘went overboard’ – but is f****** sick of apologising’.

While the event organisers have confirmed ‘there will not be a repeat’ of what unfolded.

The promoter James Barrass claimed the wrestlers only suffered from a ‘couple of scratches here and there’. 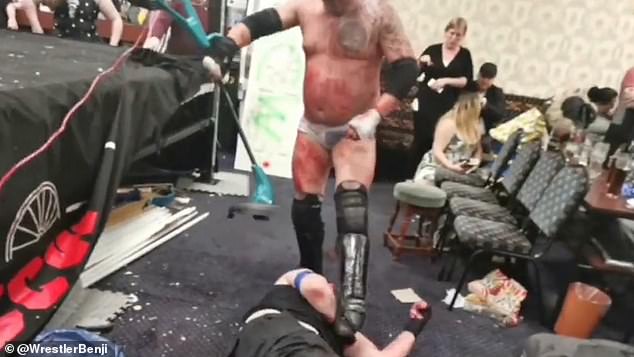 Gruesome footage from the event, held at Seaham Conservative Club in County Durham on April 29, shows the wrestlers using a garden strimmer to cut each other on a carpeted floor just inches away from the stunned audience 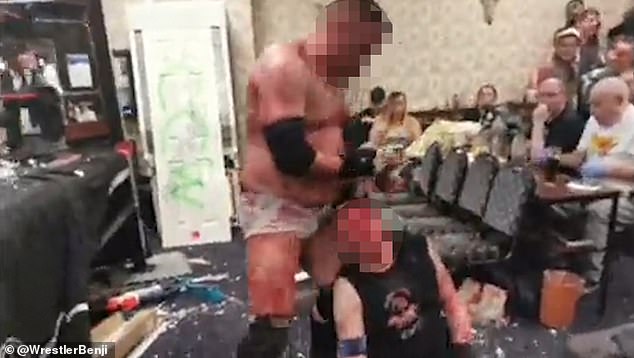 One wrestler takes wooden sticks and smashes them into the head of the other wrestler, piercing the skin 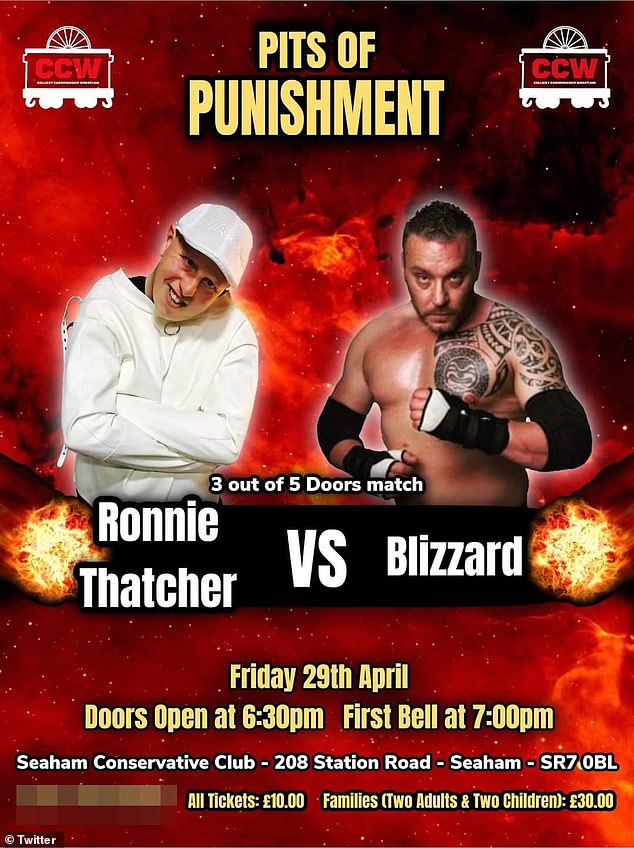 Today, a Durham Constabulary spokesman said: ‘We are working with Durham County Council’s licensing team after a number of complaints were received by the local authority in relation to an event at Seaham Conservative Club on April 29. Enquiries are ongoing.’

It comes as Teesside-based wrestler Benji condemned the violence that took place in front of children as he shared some of the footage online.

He said: ‘Please don’t do death matches on a family friendly show. There’s a time and place and this is definitely not it.

‘Families and venues don’t see company names they just see ”The Wrestling” this isn’t what we need.’

He continued: ‘The videos I’ve seen there was a mother shielding their child’s face as glass and blood went everywhere.

‘They got lucky this time and the wrestlers only got cuts and bruises but what if the untrained cowboys lost an eye or worse. 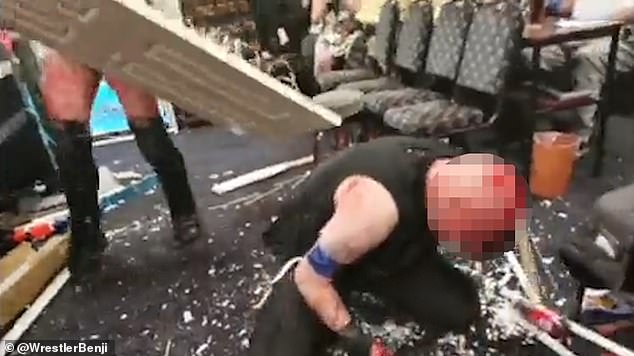 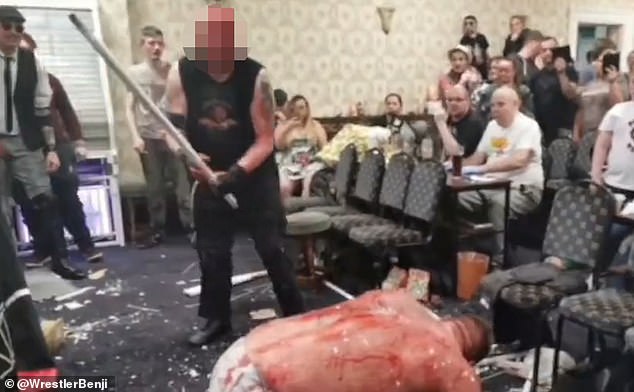 Children stared in shock as one wrestler smashes glass lighting tubes, which appear to have been stashed underneath the stage, over the other while blood trickles down their bodies

‘CCW didn’t hold their hands up they said the fans like it, the venue didn’t mind and the wrestlers went into business for themselves and it got out of hand… Yet they want to run 18+ death matches.’

However, one of the wrestlers, Ronnie Thatcher, has since posted a video to Facebook in which he said he is ‘f****** sick of apologising’ about the event.

He said: ‘I have apologised and apologised, numerous f****** times right. How many more times do I need to apologise?

‘CCW has promised this will never happen again. Me and Blizzard went overboard, we understand that, we’ve apologised.

‘We can apologise until we’re blue in the face, is it going to change everybody’s minds? No. Why? Because some people think that they’re perfect, that they haven’t done nothing wrong in their lives. 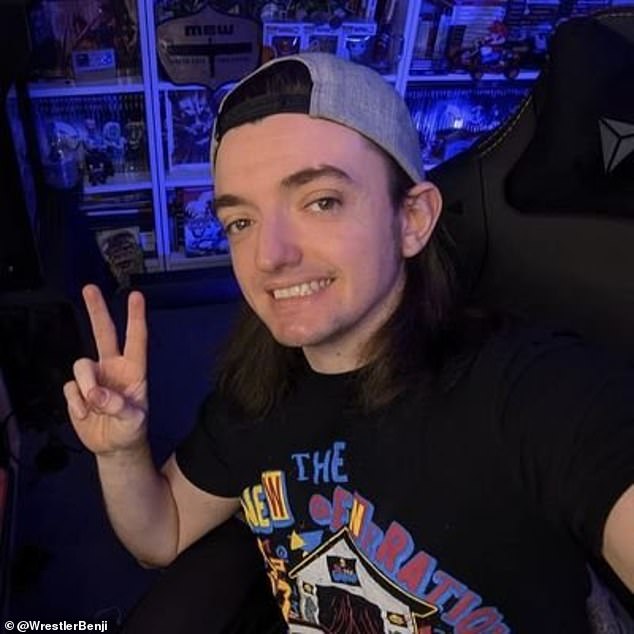 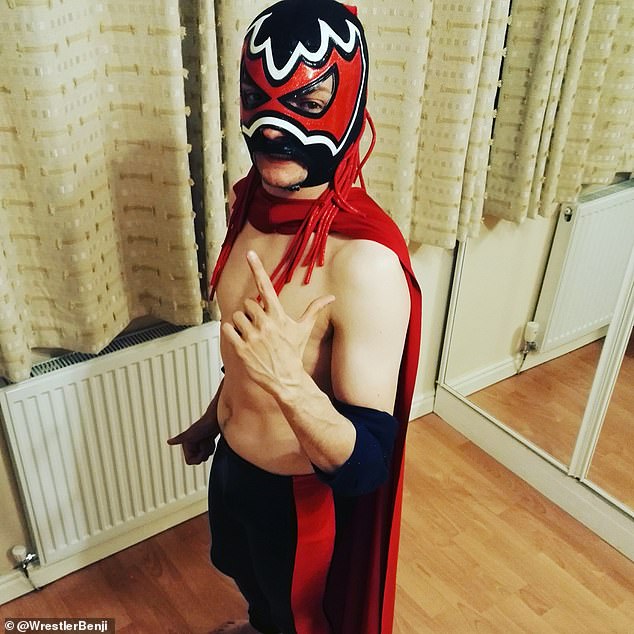 He said: ‘Please don’t do death matches on a family friendly show. There’s a time and place and this is definitely not it’ 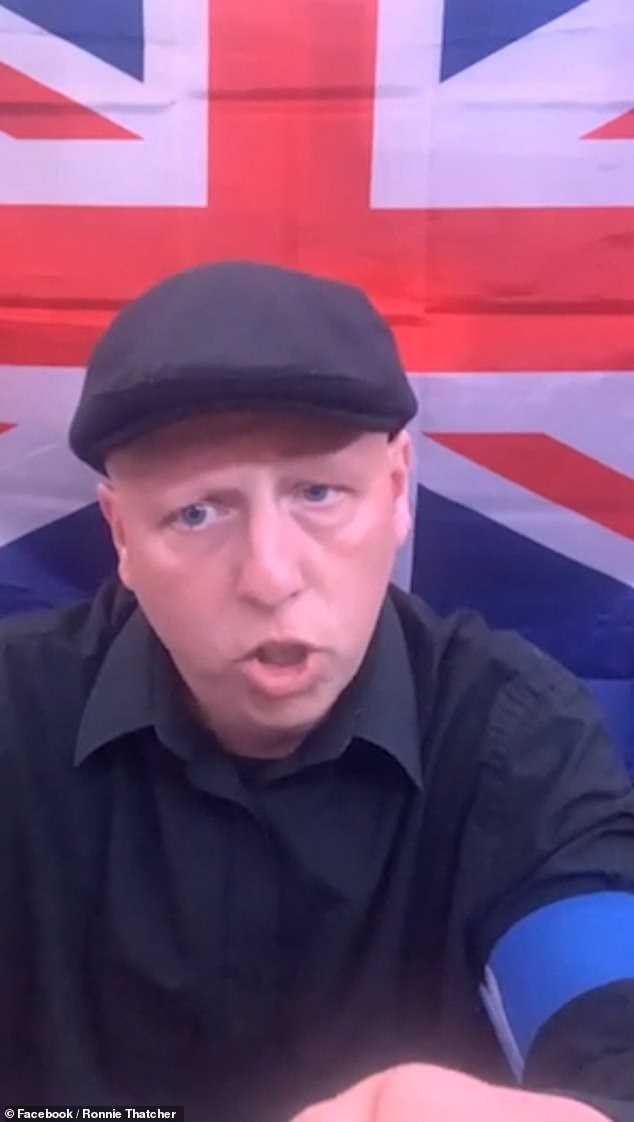 ‘No one in their life has been perfect. We make mistakes in our lives, some more than others… but we learn…

And the event’s promoter, James Barrass, posted a video online with Ronnie Thatcher saying it was ‘on famillies’ to leave.

He said: ‘We are a family show don’t get me wrong. That was on families. We put a full show on… 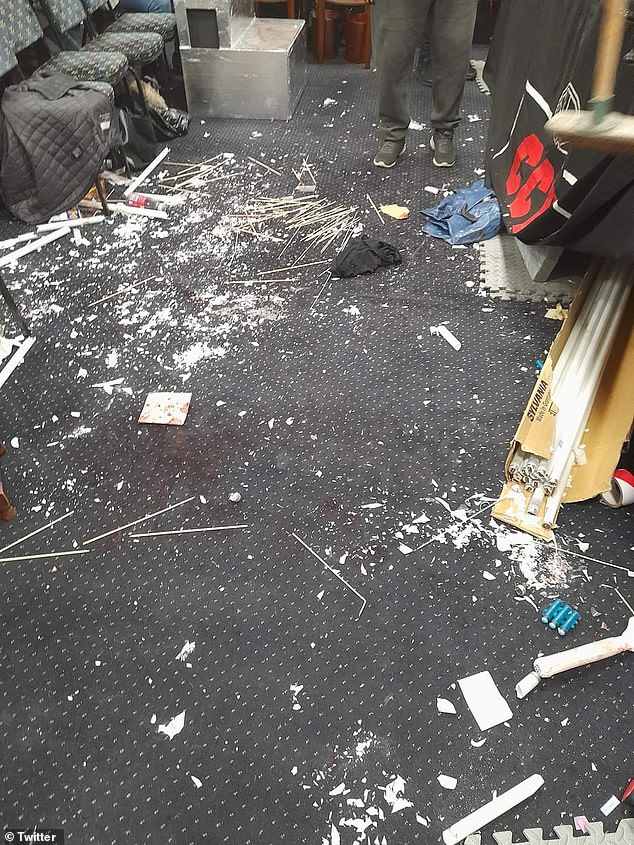 ‘This was kind of a dark match, kind of unsanctioned, kind of out of my hands, I wanted you to fight, we knew what it was.

‘What I have said is in life we live we learn and we move on. We don’t always get it right, and if we do how will we ever learn?

He told the BBC: ‘The [wrestlers] got looked after behind the scenes. A couple of scratches here and there,’ he said.

‘Blizzard was out having breakfast with his girlfriend the very next day. He said getting a new tattoo hurt him more.’

The wrestling group has now posted to Facebook to confirm that no similar events will be hosted again. 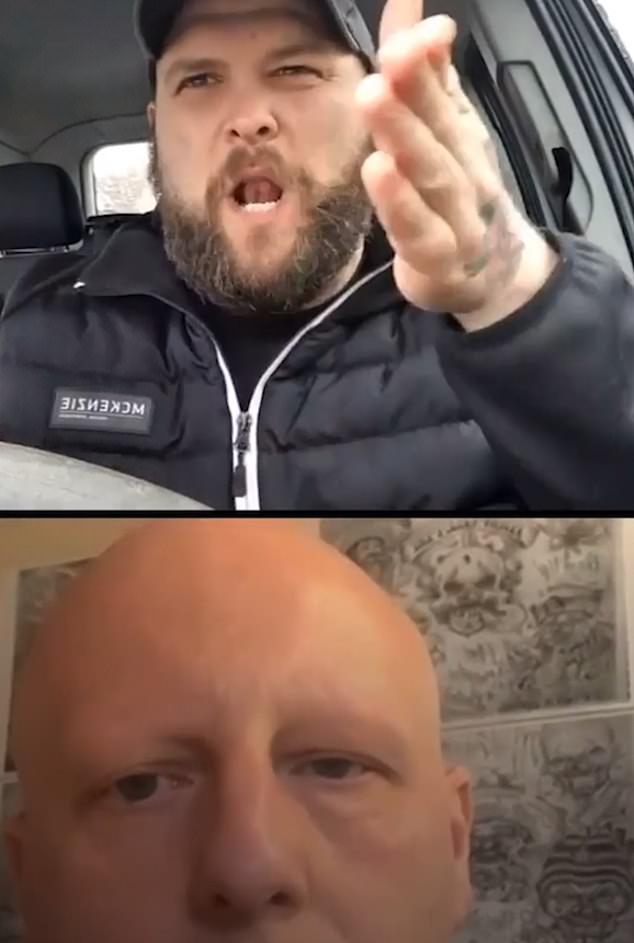 And the event’s promoter, James Barrass, posted a video online with Ronnie Thatcher saying it was ‘on famillies’ to leave

The post reads: ‘There will be no repeat of went down at PITS OF PUNISHMENT like what we saw between Ronnie and Blizzard again. It will only take place in over 18 shows (yes you can screenshot this for twitter).

‘The match was only supposed to be a doors match, where both men took it upon themselves to take things to another level. We apologise to everyone this may have upset and we will make sure this will never happen again.

‘We are very sorry, and all we can do is make things right.’