Before he died by suicide, tactical intelligence officer Laurie Fox wrote emails to his wife, Belinda, and their young sons, saying he believed they would be freer "to dream" without his mental health "shackles" in their lives.

In typical style, his reasoning was structured so rationally, said Belinda Bozykowski, that she could even understand how he came to the terrible conclusion he should end his own life after suffering without seeking support. 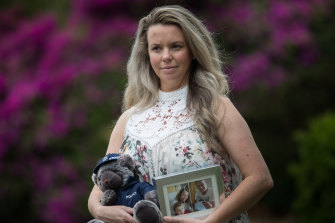 Belinda Bozykowski lost her husband Laurie Fox to suicide and has endorsed his image being ‘reanimated’ for a suicide prevention campaign,Credit:Jason South

Senior Constable Fox worked in the armed crime squad at the St Kilda Road police complex and their sons Charlie and Henry were aged 4 and 2 at the time. His mental health had begun to plummet in the six weeks prior to his death on New Year's Eve 2012, his widow said.

She could see it in his mood and other symptoms, but he was extremely reluctant to get help for fear of it counting against him at work.

"He would go to work and function perfectly normally, then come home and it felt like he would crumble. I felt like I was the only person he was comfortable to talk to; I could only help so much," Ms Bozykowski said.

"I started to see a psychologist in order to be able to help him. At the time I didn't realise how much the decline in his mental health really was."

In the seven years between Mr Fox's passing and December 2019, 20 Victoria Police employees died by suicide. As part of a campaign to help prevent further loss of life, Ms Bozykowski has stepped up to be "his voice" and has endorsed Mr Fox being digitally "reanimated" in a video.

Using "deepfake" technology, the late officer appears at his desk describing some of his warning signs and why he did not speak up. In the video, Chief Commissioner Shane Patton acknowledges police are more likely to think about suicide than the general population and need to get better at recognising the indicators.

Ms Bozykowski, who has remarried and recently had a baby boy, hopes the campaign will help serving police, veterans and family members feel more comfortable speaking about mental health and getting help. She wishes her late husband had been able to.

"We don't want people to suffer in silence," he said.

Senior Constable Fox told his family in his emails he had struggled "for too long".

"I've thought about this so well [and] my wish for you guys would be to release you from the shackles I've had and to let you dream and do what I would have wished we could all do together," he wrote.

Ms Bozykowski said she "almost can't argue" with his logic.

"Because that's how he felt and how his brain was processing everything, [but] for him to feel like he had shackles on us breaks my heart," she said.

"He had never said that to us before … for him to to feel 'I'm doing this for you guys, I can't bear holding you back' – I would have argued that concept so hard."

If you or anyone you know needs support call Lifeline on 131 114, or Beyond Blue's coronavirus mental wellbeing support service on 1800 512 348. For current or former police employees and their families, please visit the Bluespace Wellbeing website for wellbeing information and access to support services.