A woman and a child have died after a car was found submerged in a pond near to an RAF base.

The pair were found inside the blue Ford Focus that was recovered from a pond near to RAF Wittering, Cambridgeshire, on Saturday evening.

The woman died at the scene, while the boy was rushed to hospital for treatment where he later passed away.

The pond is sat on a sharp bend, meaning fast moving vehicles that lost control while travelling out of Whittering westwards may end up in the water.

Local residents said the surrounding road were the pair tragically died remained closed off since their car was recovered.

One resident, who wished to remain anonymous, said: ‘Nobody is really sure what happened or if it was a local resident who died, unfortunately it’s not the first time a car has gone into that pond in the last few years.

‘Police arrived last night and investigators have been searching the site since last night, the road is still closed off at the moment. 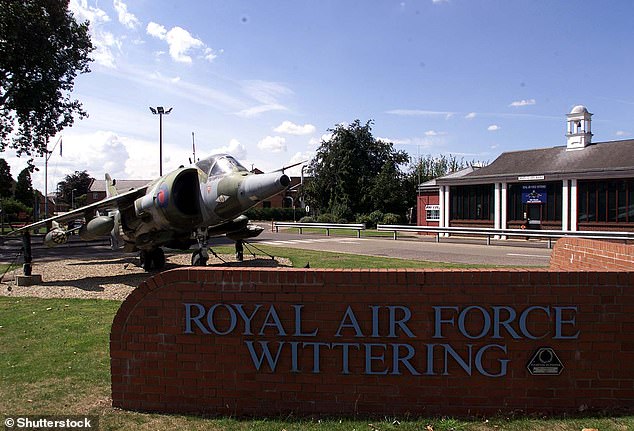 The pair were found inside the blue Ford Focus that was recovered from a pond near to the boundary with RAF Wittering (above), Cambridgeshire, on Saturday evening

The tragedy happened three years after another vehicle plunged into the same pond, but no one was injured on that occasion.

Police, fire crews, and paramedics attended the scene on Saturday and the woman and child were removed from the vehicle.  It is unclear how long the vehicle had been in the water.

A previous crash at the site in 2019 also saw a silver vehicle also plunge into the pond after a traffic collision, though in that incident nobody was injured.

A Cambridgeshire Police spokesperson said: ‘At about 6.20pm police were called with reports the blue Ford Focus had been spotted in the water next to Old Oundle Road, to the rear of RAF Wittering.

‘Police, fire crews and paramedics attended the scene and the woman and child were removed from the vehicle.

‘The boy was taken to hospital for treatment, but later died, while the woman died at the scene.’

The police have advised anyone who witnessed the vehicle go into the water, or has relevant dashcam footage, to call 101 or visit www.cambs.police.uk/report quoting 414 of 3 September.