Wife, 93, ran over and killed her husband, 98, after reversing into him while he cleared condensation from car rear windscreen, inquest hears

A 93-year-old wife killed her husband after reversing into him while he cleared condensation from her car windscreen, an inquest heard today.

Pat Faulkner ran over her husband Harold Faulkner, 98, in a fatal accident on the driveway of their detached home in South Petherton, Somerset, in January.

The retired secretary was reversing her automatic Nissan Micra down the eight-metre long driveway when she backed into her husband, who died from his injuries after being trapped under the car.

Mr Faulkner, a retired engineer, may have been trying to clear mist or condensation from the rear windscreen of his wife’s car when she ran over him, the Taunton inquest heard. 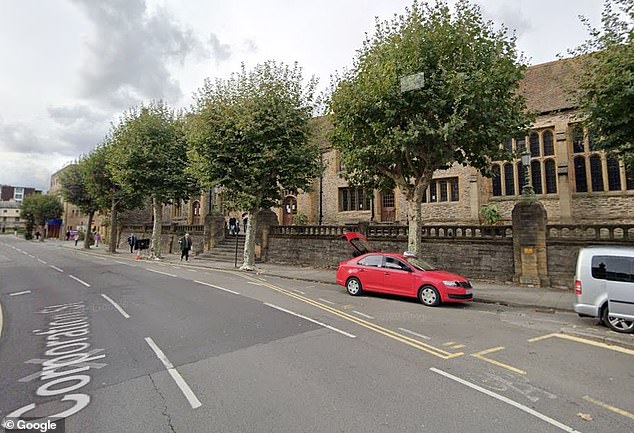 Pat Faulkner ran over her husband Harold Faulkner, 98, in a fatal accident on the driveway in South Petherton, Somerset, in January, inquest at Somerset Coroner Court (pictured) heard

Police were unable to determine if Mrs Faulkner had failed to check her mirrors or made a driving error or whether her husband had been obscured by the condensation on the rear window or had knelt down out of her view.

The car had no defects, the weather was fine and it was daylight at the time of the tragic accident, the inquest heard.

Mrs Faulkner told police her husband had been chatting to a neighbour and may have been clearing the condensation from the opened window of the car.

She told police, who said there was some confusion in her account, that it was ‘all a mystery’, adding: ‘I looked in both mirrors.’

Investigators said her husband may have been using a yellow sponge to wipe away the mist on the back window with the boot open and leaning in.

But after clearing only half of the window, his wife did not see him through the uncleared window.

Mr Faulkner died from asphyxia and chest trauma after getting trapped under the car, Somerset Coroner Court heard.

The senior coroner for Somerset Tony Williams said the CPS looked at whether to pursue a charge of causing death by careless driving against Mrs Faulkner but decided it was not in the public interest.

She has given up her licence and will never drive again.

Mr Williams recorded an accidental death conclusion saying Mr Faulkner ‘was struck by the reversing car and sustained injuries that were to prove fatal’.