There was a riot when I was in Athens a few years ago. Police fired tear gas into a rampaging crowd as they surged through the streets.

I was in a museum, oblivious. Walking back to my hotel, people were sitting on the street eating and drinking with not the slightest sign that anything had happened an hour before and just a few blocks away. I first learnt about it that evening from the BBC News. 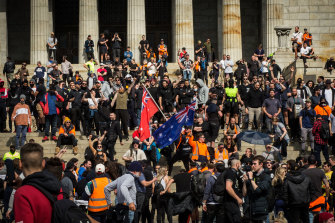 Protesters converged on the Shrine of Remembrance.Credit:Getty Image

Melbourne was like that this week. Walking the dog in the neighbourhood park, there was a helicopter hovering in the distance. Families and friends were enjoying their first chance in a long time to have an outdoor picnic, while some other Melburnians were using the same opportunity to punch a police officer or desecrate the war memorial.

That afternoon, a friend sent me a video clip from a website I had never heard of. It features a very authoritative sensible looking man in a pin-stripe suit. He confidently proclaims to his gullible viewers that the government is controlling the population under guise of the health crisis.

He assures viewers that they are within their rights to refuse to comply with health orders, police directives nor any of the other measures that have been introduced to combat the pandemic. Needless to say, the website seeks donations in order to assist their ‘noble’ cause. Hundreds of thousands of dollars have been donated.

The same ratbag website was the source of much of the Dan Andrews broken back conspiracy theories. It also hosts material claiming to debunk what happened at Port Arthur and features shooting fanatics ranting about how politicians are threatening to take away their guns.

It is a cesspool of rubbish, and a thinly disguised pyramid scheme.

It is a cesspool of rubbish, and a thinly disguised pyramid scheme, like those selling a ‘secret formula’ for always winning at the races or beating the stock market. The only secret is if you trick enough people into thinking there is a secret. You do indeed get rich – at their expense.

These scammers have always been around and always will be. The pandemic and the personal, financial and social stress created makes for fertile ground for anyone who claims to have a shortcut to solving what seem to be overwhelming problems. The conspiracy theorists are making money by feeding our anxiety. Their lucrative business model must be destroyed.

There is an unshakeable sense of grievance that may be motivating these protests, daily reminders of how unfair life has become, how loaded are the dice, how deeply the snouts are in very comfortable troughs. Unsurprisingly, those who feel they are missing out do not trust authority and wonder why they ought not take matters into their own hands.

If the boss has just trousered millions of dollars from JobKeeper whilst still turning a handsome profit, how do the staff feel when their wages have been static for years?

When poor people are being hounded for robo-debts and find themselves dragged into a mis-matched fight against the might of the bureaucracy, their persecution complex kicks in.

When a government minister accepts a ″⁣donation″⁣ – speculated at as much as a million dollars from a secret source, integrity becomes a joke.

When everyone else seems to be getting free money, and the system seems loaded, the unsurprising reaction is that rules and rule-makers need no longer be respected.

The neo-Nazi and Proud Boy fascists are merely the tip of an untidy iceberg, made from a mixed bag of sceptics, anarchists, spiritualists, self-styled health and purity gurus, cult leaders and the tin-foil hat brigade. They enjoy the attention – it is their primary objective, part sport and part performance. 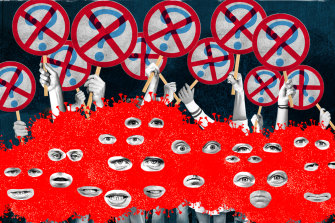 Seeing themselves featuring on the nightly news, front pages and social media feeds validates their behaviour and helps persuade their followers that they are succeeding to grow their ‘movement’.

It is a tried and tested business model. Like a frill-necked lizard, they puff themselves up to make themselves seem more of a threat than they are.

Police officers are understandably fed up with being attacked. There is no doubt that some of the ‘protesters’ hope that they get a free swing at a copper. Their friends film them and they boast about it later.

But undisciplined retaliatory actions of excessive force by a few police makes it even more likely that other police will be attacked in future.

The self-styled leaders of these protests are not stupid, but calculating. They do not represent the community of Melbourne and they never will. Their fleeting moment in the spotlight must end.

We must have zero tolerance for those who undermine community harmony with violence and do so for personal profit.

The answer to isolated street violence is better policing and more peaceful picnics.