London: King Charles III has never given up hope of reconciling with Prince Harry, according to palace sources.

Despite all of the recent revelations and allegations from California, Charles believes he will one day be reunited with his son and they will move forward, sources insist. 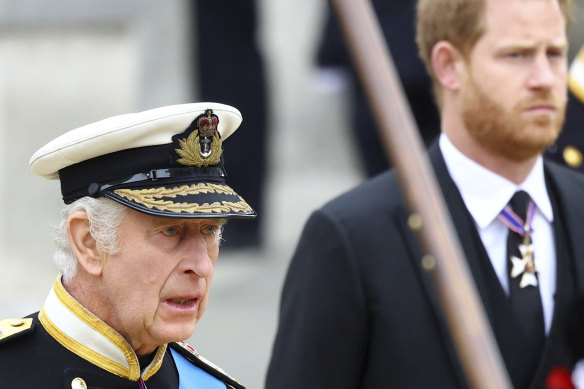 King Charles III and Prince Harry at the funeral and burial of Queen Elizabeth in September.Credit:AP

The two sides appear to have reached a stalemate, each keen to build bridges but convinced that the ball is in the other’s court.

There is thought to have been no contact between them since the Duke of Sussex’s memoir went on sale in Spain on Thursday, and other copies were leaked in New York.

Those close to the King are aware that the “only way out of this mess” is reconciliation, however difficult. It is considered the only way of avoiding “open warfare” for years to come. 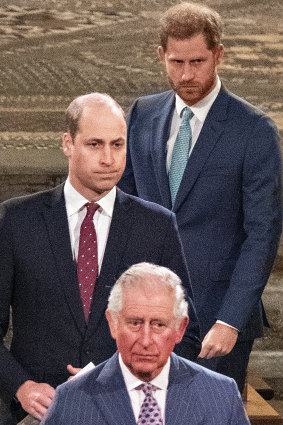 “The challenge here is not to build a mountain of resentment that cannot be bypassed,” one source said.

“In many ways the royal family is no different to any other family and it will be their normality, rather than their uniqueness, which offers their greatest chance of reconciliation.

“Although Harry resents the role he was dealt within the institution, it is the fact that they are father and son that will bring them back together.”

The Prince told ITV that his family had “shown absolutely no willingness to reconcile.”

But sources said it was the King’s view that they would reconcile. “What father does not forgive their son?” he added.

Jonathan Dimbleby, the veteran broadcaster and friend of King Charles, also believes the King will be eager to heal the rift to try to move on. 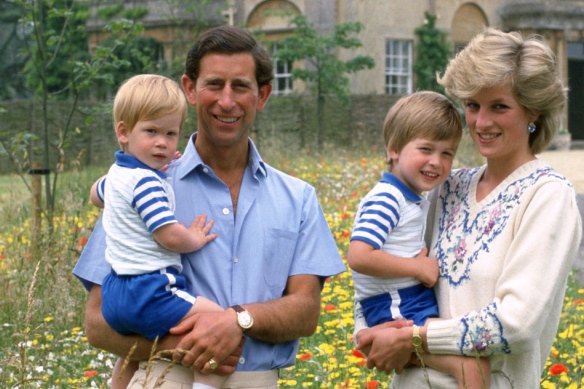 Charles with Harry, and Diana with William at Highgrove, England, in 1986.Credit:Tim Graham/Getty Images

Speaking on the BBC’s Today programme, he said he believed Charles would be “extremely pained, very frustrated and anxious” to reach a resolution with his son. But, Dimbleby also said: “If he [Harry] wants reconciliation, I don’t understand how you do it by metaphorically sitting in your Apache firing potshots at people who aren’t going to answer back, as he must very well know.”

Harry may have used his memoir to accuse his father of being distant and of failing to hug him in the darkest moments of his life but he also peppered it with tender anecdotes that convey genuine warmth.

Among them, he revealed that Charles often used to ask his son to write to him rather than call, as he “loved” his letters. He referred to his son as “darling boy” and when Harry confided that he had been suffering with panic attacks and anxiety he sent him to a doctor before suggesting that it was his fault and that he should have got him help years ago.

The King also empathised with his younger son when photographs of his wild night in Las Vegas playing naked billiards were splashed all over a tabloid newspaper.

Although he was “bemused”, Charles said he too had “felt” exposed on many occasions and Harry said they chatted that night about their unusual life for a long time, having found common ground.

The King would also leave notes under his son’s pillow and sit on the side of his bed until he fell asleep, knowing he was afraid of the dark.

A royal source said it was not surprising to anyone who knew the King that Harry had presented an image of a sensitive, thoughtful man whose faults were solely attributed to his upbringing.

They said: “It would have been odd if Harry had painted anything other than a tender portrait of his father. They were very, very close and it would be impossible to hide that reality if you wanted to write your whole history.”

The source said that while it was “not a reason to celebrate”, the fact that the Prince had not recast his father as part of the narrative, the “authenticity” of their relationship will be preserved.

“It may even prove the mechanism that brings them together,” they added.

The Duke and Duchess of Sussex are both expected to be invited to the King’s coronation in May, despite the various allegations made against the palace.