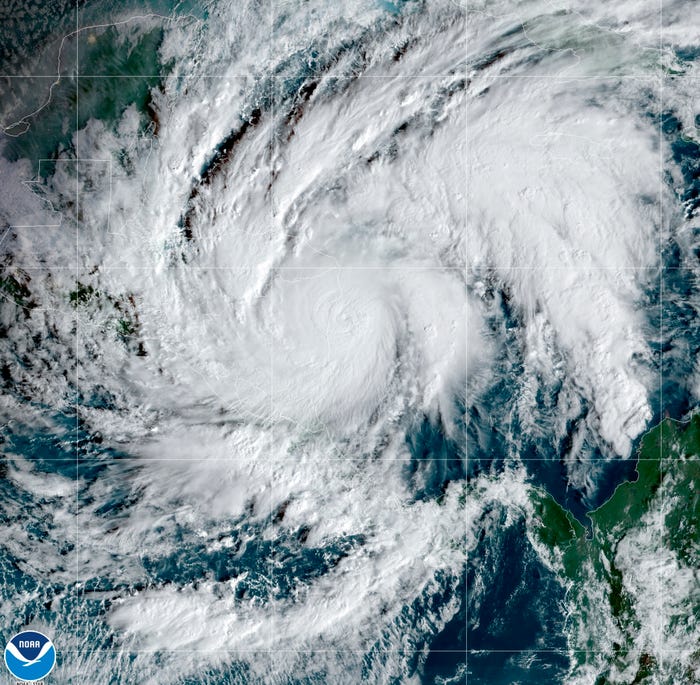 While Americans awaited the results of the 2020 election on Tuesday, a record-breaking storm hit Nicaragua, demolishing buildings, triggering deadly mudslides, and dumping rain as it moved inland.

Hurricane Eta formed in the Atlantic over the weekend then rapidly intensified: Between Sunday and Monday, Eta strengthened from a tropical storm to a Category 4 hurricane. Its maximum sustained winds reached 150 mph, making it one of the strongest hurricanes of the season. It was also the season's 28th named storm, making 2020 the year with the most named storms in recorded history.

That tops 2005, which had 27 named storms. The two years could be considered a tie, however, since 2005 had one storm that was strong enough to get a name but didn't because scientists identified it after the season ended. (Storms are named once their wind speeds reach at least 39 mph.)

What's more, the hurricane made 2020 the first year on record that three major hurricanes formed in the Atlantic between October and November. That's usually a time when storms tend to weaken as oceans cool and winds pick back up. Only four other hurricanes on record have reached Category 4 status in November, the most recent being Hurricane Paloma in 2008.

Hurricane season tends to peak in September, but it lasts through November. That means more storm activity could still come, according to Phil Klotzbach, an atmospheric scientist at Colorado State University.

"The odds certainly favor another storm or two forming in November," Klotzbach told the New York Times on Sunday. "The large-scale environment, especially in the Caribbean, is forecast to remain more conducive than normal for this late in the hurricane season."

Already, the 2020 hurricane season has surpassed researchers' most dramatic forecasts. In August, the National Oceanic and Atmospheric Administration predicted that the season would have up to 25 named storms and 11 hurricanes. With a month still to go, 2020 has seen three more named storms and one more hurricane than those forecasters expected.

Most of the year's named storms also came earlier than their counterparts in previous years. Hurricane Isaias, for example, formed on July 30 — the earliest storm with an "I" name on record. (Storm names go in alphabetical order.) Storms with "I" names don't usually form until October 4.  In fact, of the 28 named storms so far in 2020, only three – Arthur, Bertha, and Dolly – weren't the earliest with their letter to form in history.

The next decade is expected to see even more active hurricane seasons, largely due to climate change.

Research shows that climate change makes storms slower, stronger, and more devastating, since hurricanes feed on warm water. A single-degree Fahrenheit rise in ocean temperature can increase a storm's wind speed by 15 to 20 miles per hour, according to Yale Climate Connections.

Each new decade over the last 40 years has brought an 8% increase in the chance that any given tropical cyclone will become a major hurricane (Category 3 or above), according to a study published in May.

Similarly, a study from 2013 found that for each degree the planet warmed over the previous 40 years, the proportion of Category 4 and 5 storms  increased by 25% to 30%.

Warmer water can also lead storms to develop into powerful hurricanes more quickly via a process called rapid intensification. Eta was the ninth storm to rapidly intensify this year, and one of the fastest-intensifying storms on record. Such speedy intensification for a storm is unusual, especially in November.

"It's more likely that a storm will rapidly intensify now than it did in the 1980s," James Kossin, an atmospheric scientist at NOAA, told the Associated Press in October. "A lot of that has to do with human-caused climate change."

A quickly intensifying storm not only poses a more severe threat to coastal areas, it also makes the event harder to predict and prepare for.

When a storm rapidly intensifies, it "does not appear to be a significant threat until it's too late, greatly stressing any preparation and evacuation plans," University of Miami atmospheric scientist Brian McNoldy told USA Today in August. "Neither human forecasters nor computer models do a great job with rapid intensification; it is one of the key challenges in all of meteorology."