With alleged mosque terrorist Brenton Tarrant in sight, two country cops put their "total trust" in each other's abilities as they gave chase.

The officers, who had known each other for many years and played rugby together, had "total faith that the other would do their job and continue to go forward regardless of what we encountered". 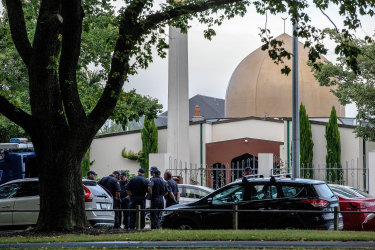 The Al Noor Masjid mosque, the scene of the mass shooting in Christchurch.Credit:SNPA

It was about 2pm on March 15 when the officers saw Tarrant's gold Subaru driving erratically with its hazard lights on. At this time they had no idea how many gunmen there were, but were in the area because they believed there was a good chance the offender or offenders would have left the two mosques where, it would later emerge, 51 people had been fatally shot.

They managed to ram the car to the side of the road – 18 minutes after police received the first emergency call from the Al Noor Masjid – and, ignoring the bombs in the back seat, dragged Tarrant through the passenger side of the car.

The suspect was thought to have been speeding to his third target, the Ashburton Masjid, and allegedly told the arresting officers eight other shooters were involved. But by the afternoon of March 16, police were confident the accused killer acted alone.

A passer-by videoed the dramatic arrest, which Prime Minister Jacinda Ardern said at the time could only be described as an act of bravery. 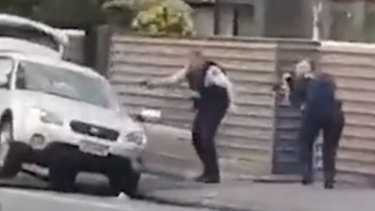 Footage of Brenton Tarrant being arrested in Christchurch after the mosque shootings.

Ardern gave them the awards in a private ceremony during the association's 84th annual conference in Wellington.

In a joint statement, the country cops, known as officers A and B while their names are suppressed, thanked colleagues who nominated them for the award and acknowledged other first responders.

"We were doing our job and were part of a huge and focused operation which resulted in the arrest of the alleged gunman. In doing our job we represented all police staff around the country who put themselves in harm's way every day. This includes those who have gone before us who set the bar high for the rest of us to meet," the officers said.

"We have known each other for many years, including playing many games of rugby together, and had total trust in each other's abilities, and total faith that the other would do their job and continue to go forward regardless of what we encountered."

The two experienced police officers did not know if there was more than one offender at the time they pursued the alleged gunman but believed there was a good chance the offender, or offenders, would have left the mosques.

"For us, knowing we played our part in possibly preventing further casualties is really important," they said. "We know our families are truly proud of what we were able to do, and that has helped tremendously in the past months."

The officers offered their condolences to the families of the victims. "As officers our job is to keep New Zealanders safe so when we can't do that, it cuts deep."

Mr Cahill said all police staff were proud of their actions.

"All officers wonder how they would respond when faced with a split-second decision to risk their lives," he said.

"These two officers have answered that question by responding with outstanding bravery which protected many others from further harm."

It was earlier reported the pair had been at Princess Margaret Hospital in Cashmere, where they'd been training on a disused floor in how to deal with an armed offender, when they heard reports about an active shooter in the central city.

Rather than making a bee line for one of the mosques, they tried to predict where the gunman might head next.

Police Commissioner Mike Bush said earlier he was listening to a live stream of the officers at the time of the arrest. He said the person in the car "was not willing to be arrested" and he credited the arresting officers for their act of bravery.