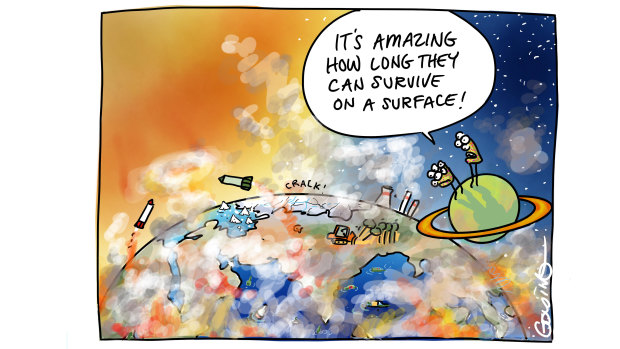 Never tire of caring
David Crowe’s article ″⁣I saw Kyiv up close. I can’t look away″⁣ (30/12) was uplifting but I was puzzled by his expression ″⁣Ukraine fatigue″⁣.
Does he mean that viewers of news bulletins depicting scenes of death – for example, babies in maternity units dying from rocket attacks, or scenes of 8 million refugees huddling in makeshift shelters, or scenes of women and children hiding in freezing basements – are going to switch off the news? I don’t think so.
We are lucky. We have an open, honest, accountable and democratic government and as a free people I don’t think we will ever tire of caring about and offering our wholehearted support to the people of Ukraine. They just want the same things we have.

Where to on COVID?
Not introducing any new measures for Chinese flights into Australia sounds good on the face of it.
What will happen if it is similar to Italy, where the first planeloads were found to have 50 per cent of passengers infected? Presumably they will just be let into the community.
What will happen if they need medical attention? Hospitals are under pressure as it is. Seems a very laissez faire approach.
The mention of lockdowns in the Age editorial (30/12) is completely irrelevant. The emphasis is normally, and should be on, the people entering Australia to comply with sensible requirements so as to not exacerbate the medical situation and infection rates here.
It appears the emphasis is on ″⁣business″⁣ as usual, particularly for the airlines.

Back to the future
The attempt (Comment, 31/12) by the incoming federal president of the Young Liberals, Dimitry Chugg-Palmer, to understand the Coalition’s poor standing with young voters used a throwaway line that people are more likely to vote conservative as they age. I disagree.
I think older people are more likely to vote for the party that espouses values and ideas that were popular when they were young. I suspect that in the future, today’s youth will vote for the party that holds true to today’s so-called progressive policies. This isn’t conservatism, it’s nostalgia, and will always be challenged by younger generations.

Electing who to trust
The Liberal Party in opposition accuses Labor of dangerously politicising our policy on China. Last April, the then defence minister, Peter Dutton, said we needed to prepare for war with China. Voters made it abundantly clear in May who they would prefer to trust to manage the relationship with our biggest trading partner.

Image over all else
China’s out-of-control COVID epidemic would suggest a tightening of borders was in order to prevent global contamination. Instead it has chosen its historical state response of “it’s all under control″⁣ while allowing flights out of the infected areas, presumably because “a problem shared is a problem halved”.
This is the response of a government that cares only about its global image, not global consequences.

The human targets
My elderly father has recently had multiple admissions to Footscray Hospital. We have seen how resources within the emergency department are strained to the max. Even when under duress and run off their feet, the medical and nursing staff have treated my father and his family with the utmost respect and kindness.
These kind of human needs cannot be quantified by statistics. Western Health may not be meeting its targets but the staff were meeting ours.

Slowly does it
The lack of urgency for Australia to move to a republic is a little like St Thomas Aquinas: Let me be chaste, but not just yet. Most of us would be happy with a ceremonial head of state chosen from a range of eminent, respected candidates. Little else would need to change as our system of government, though complicated by our federal-state system, functions well and avoids the problems we see unfolding in the US. There is no urgency, but aiming towards a new system and modernising some other antiquated sections of the Constitution by 2030 has some merit.

It’s not cricket
I feel sorry for Vinoo Mankad, who I saw play in 1946. His name is sullied by an incident totally within the laws of the game, for which the offender receives no penalty while the bowler who warns him or her is criticised. If a bowler crosses the line, he/she is penalised.
I suggest that a batter who leaves his/her station before a ball is bowled is penalised four runs. If he/she hasn’t already scored four, the side is penalised anyway. As it stands, the bowler gets the blame for a sin the batter has committed. Is that cricket?

Unforgettable …
Dear Novak,
I can’t forget the pandemic, the deaths, the lockdowns, the uncertainty … and those unwilling to be vaccinated. Robyn.

… Unmentionable
Can we please not hear what Nick Kyrgios is doing or saying?