Victorian alpine businesses are still placing their hopes on Melburnians being able to return to the region soon, after coronavirus rules and destruction from severe rain put a dampener on the ski season’s opening weekend.

Despite some foggy conditions on Saturday, ski fanatics at Mt Buller were lapping up more than half a metre of coverage on its main village slope, Bourke Street. 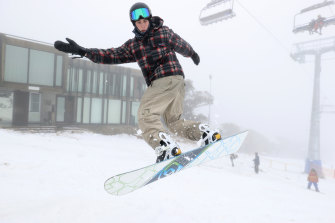 A snowboarder takes a jump at Mt Buller Ski Resort on Saturday. Credit:Getty

With COVID-19 restrictions keeping Melburnians within 25km of their homes, only those in the regions have been able to travel to the Victoria snowfields for the Queen’s Birthday weekend.

David Clark from Mt Buller’s marketing team said for those Victorians lucky enough to hit the slopes on Saturday, there was no wiping the smiles off their faces.

While demand for accommodation on the mountain was strong across July and August, he said tourism operators are still banking on visitors from metro areas.

“We had to refund so many bookings, not just us but all the smaller operators that own restaurants and bed and breakfasts. They lost out big time on this weekend,” he said.

“The operators haven’t made money effectively since September 2019 … so we need Melbourne to come back.

“I’d recommend people plan ahead to secure their preferred dates, and the thing to keep in mind for a lot of Melburnians is that we are open and guarantee skiing until the October 3, so there’s a long time in the season to go.”

Falls Creek Resort Management CEO Stuart Smythe said 2020 was an “extremely challenging time” for businesses around the resort, but he believed operators would bounce back this year.

Falls Creek has delayed social functions and fireworks which usually accompany opening weekend until restrictions ease across the entire.

“It will be a quiet start to the season without the usual celebrations and social gatherings, but we acknowledge it is best for all Victorians for it to be done this way,” Mr Smythe said in a statement.

The Bureau of Meteorology’s duty forecaster Ilana Cherny said over the long weekend, she expected snow down to 1600 metres, but with precipitation easing on Sunday and Monday, the amount of snowfall would reduce.

The ski operators at Mt Baw Baw faced additional disappointment after the resort was forced to close this weekend due to 225mm of rain which fell on Wednesday and damaged infrastructure.

“Due to significant weather event … that impacted Mt Baw Baw Alpine Resort, the team are working to repair damage and flooding to areas of the resort,” a media spokesman said. 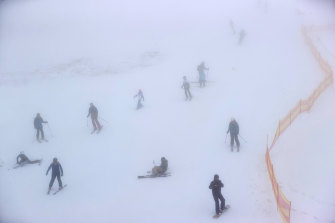 Foggy conditions didn’t stop the Bourke Street slope at Mt Buller from being packed on Saturday. The resort is open for the season, with regional Victorians permitted to travel to the area.Credit:Getty

“This has resulted in a change to snow activity operations. No lifts will operate over the Queen’s Birthday weekend including the toboggan park.”

Live cameras from Mt Baw Baw showed employees working on muddy roads around the resort on Saturday, with piles of snow still intact despite the heavy rain.

Health Minister Martin Foley said on Saturday that while the financial strain on regional businesses was considered when drafting rules, like the 25km restriction, the public health considerations were the key driver.

“We look forward to all Victorians getting back out and about and supporting those important regional tourism operators,” he said.

“All Victorians have great sympathy for small businesses, particularly for tourism businesses, who are doing really tough.”