After three consecutive shootings last week in the Virginia Beach resort area left two people dead and another eight wounded, the three suspects charged so far are to appear to court Monday.

One of the incidents was an officer-involved shooting, and authorities are also investigating why the officer responsible for fatally shooting a man did not have his body-worn camera activated as the Friday night chaos broke out.

Ahmon Jaree Adams, 22, of Chesapeake; Nyquez Tyyon Baker, 18, of Virginia Beach; and Devon Maurice Dorsey Jr., 20, of Virginia Beach, Virginia, were all arrested in connection to the first shooting Friday night that happened in the 2000 block of Atlantic Avenue. Each has been charged with seven counts of felonious assault, use of a firearm in commission of a felony and reckless handling of a firearm.

Several people were wounded but there were no fatalities in that incident.

A preliminary investigation found that a group of individuals was involved in some type of conflict that resulted in a physical altercation, and at some point, several individuals produced firearms and began shooting at each other, the Virginia Beach Police Department said. 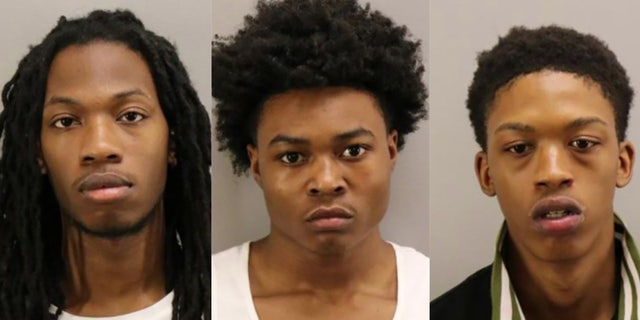 While police were securing the crime scene, officers heard gunshots from a second shooting that unfolded at the 300 block of 19th Street near Pacific Avenue, where a bystander, identified as 29-year-old Deshayla Harris, of Norfolk, Virginia, was likely killed by stray gunfire. She was pronounced dead at the scene, and investigators did not immediately believe her killing was related to the first shooting.

“We do believe that she truly is, at this point in time, an innocent victim,” Virginia Beach Police Chief Paul Neudigate said at a press conference Saturday, stressing that her death remains “very much under investigation,” as no arrests in connection with her slaying have been made so far. Harris reportedly was one of the stars of season 17 of “Bad Girls Club” on the Oxygen network.

As the aftermath from two consecutive shootings in a short time frame continued to unfold, a third incident of the night in the 300 block of 20th Street left 25-year-old Donovan W. Lynch, of Virginia Beach, dead. A uniformed police officer encountered an armed individual, the police department said, which “resulted in a police involved shooting.” Lynch succumbed to his injuries at the scene.

Also at some point during the three incidents, another police officer was struck by a vehicle and transported to a local hospital, where he was treated and released.

Speaking at the press conference Saturday, Neudigate responded to a question from a member of the Black Lives Matter 757 chapter who asked why the officer who fatally shot Lynch had not been arrested.

“The officer was wearing a body cam, but for unknown reasons at this point in time, it was not activated,” the police chief said, adding that there was no immediate probable cause for an arrest. “That will be part of our administrative investigation — that will be subsequent to the criminal investigation.”

The Virginia Beach Commonwealth Attorney’s Office had overseen the preliminary investigation conducted Friday night and is contacting the Virginia State Police to determine if an external investigation was warranted, Neudigate said, according to WVEC.