Keen travellers have snapped up 40,000 regional travel vouchers issued by the Victorian government within half an hour of them being released.

The second round of the Regional Travel Voucher Scheme, providing $200 to put towards trips to country Victoria, was exhausted within 30 minutes of their release online at 10am Wednesday. 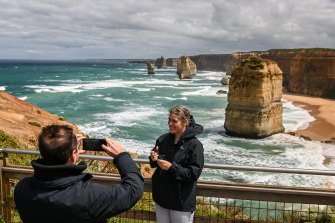 The vouchers can be put towards accomodation, tours or meals during trips to locations around regional Victoria.Credit:Justin McManus

Those who too slow to nab their voucher will have to wait until the next round is released on March 30.

The system ran more smoothly on Wednesday than during the release of vouchers in December, which saw the vic.gov.au/regional-travel-voucher-scheme website crash due to demand.

At the time, Business Victoria apologised to holidaymakers after tens of thousands of people were left disappointed as they were unable to apply for a voucher.

The site recorded 800,000 visits as people struggled to lodge their applications. More than 19,000 people applied for vouchers during the first allocation.

The state government says the vouchers are to be used to contribute to the costs of accommodation, tourism attractions or tours in regional Victoria, as well as the Yarra Ranges, Dandenong Ranges and the Mornington Peninsula.

Victorian residents who receive a voucher and spend at least $400 in those areas – whether it is on accommodation, tours or attractions during their stay – will be eligible to receive a reimbursement of $200, after presenting their receipts.

Those who received vouchers in Wednesday's ballot must travel between January 27 and April 1 to claim the reimbursement.

The scheme is open to all Victorian residents over the age of 18. Only one voucher is permitted per household.

The next voucher round will open at 10am on March 30 at vic.gov.au/regional-travel-voucher-scheme.