Victoria has recorded 134 new cases of coronavirus as the state battles a huge outbreak and the whole of Melbourne braces for a six-week lockdown from midnight.

Only 11 of the new cases are connected to known outbreaks, raising fears that community transmission is spreading around the city.

Premier Daniel Andrews said there are now 75 cases of the deadly disease in nine social housing towers in north Melbourne which have been placed under hard lockdown, confining 3,000 residents to their homes.

Forty people are in hospital with seven fighting for their lives as the state’s testing total passed 1million with 30,000 swabs on Tuesday. 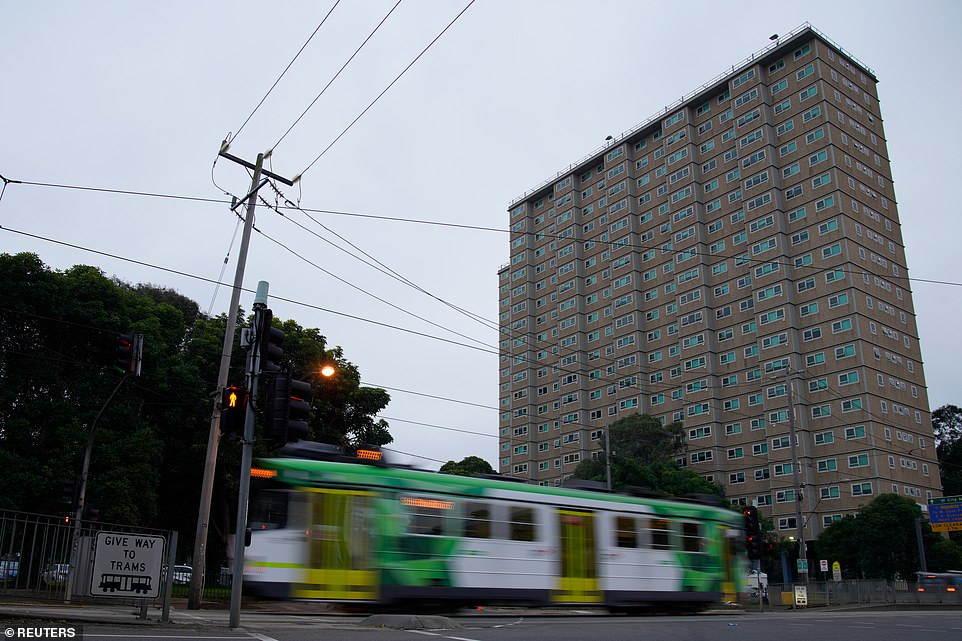 Earlier on Wednesday morning Mr Andrews refused to answer why he employed private security guards instead of using the police to man hotel quarantine for returned travellers.

Dozens of cases from the Melbourne outbreak have been traced back to quarantine breaches after guards broke social distancing rules, interacted with patients and took the virus home to their families.

In a heated interview on the Today show, host Karl Stefanovic asked him: ‘How could you blame Victorians yesterday for the outbreak when it was your government’s decision to employ an incompetent private security force to guard those in quarantine? 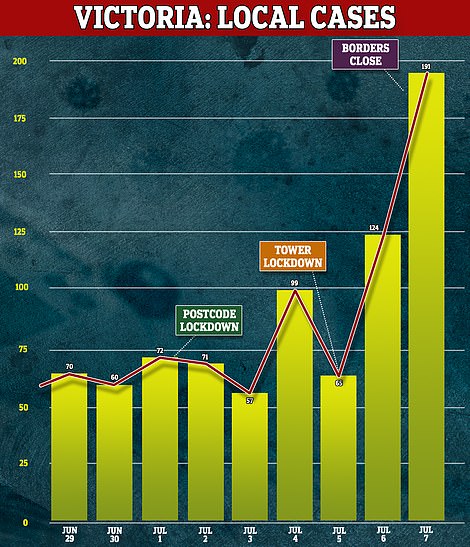 ‘That’s an unbelievably catastrophic bungle right at the front door.

Mr Andrews said he ‘did not come on the show to argue’ and dodged the question by saying an inquiry is under way. In a press conference afterwards he said he was not considering resigning.

From midnight, Melbourne residents will be only allowed to leave their homes for work and study, giving or receiving care, shopping for essentials and daily exercise near where they live.

Officers said the mission – called ‘Operation Sentinel’ – will use automatic number plate recognition to identify anyone breaking the rules.

There will also be vehicle checkpoints across the state – including the main arterial roads to regional Victoria.

Officers will continue to make house visits and patrol public places all over Victoria, with $1,652 fines to anyone breaching social distancing restrictions.

Victoria Police made 810 spot checks in the past 24 hours at homes, businesses and non-essential services across the state. They have issued a total of 6,314 fines, including 15 people who held an ‘AirBnb party’ last night.

Around 264 ADF soldiers are assisting with on-ground operations, focusing on planning, logistics and transport. They will also play a key role in monitoring the boundary around metropolitan Melbourne and Mitchell Shire.

Gatherings of more than two people who do not live together will be banned; beauty services and entertainment venues will shut; and cafes, restaurants and pubs will be able to offer takeaway only.

Year 11 and 12 pupils and special schools will go back to class but holidays will be extended by a week for students up to year 10, with remote learning a possibility after that.

Restrictions for the rest of Victoria remain the same – but residents can only enter Melbourne for caregiving, essential shopping and work or study.

Under-pressure premier Andrews said the new lockdown was essential to avoid ‘thousands and thousands’ of cases and ‘many, many people in hospital.’

‘This is a pandemic and it will kill thousands of people if it gets completely away from us,’ he said. 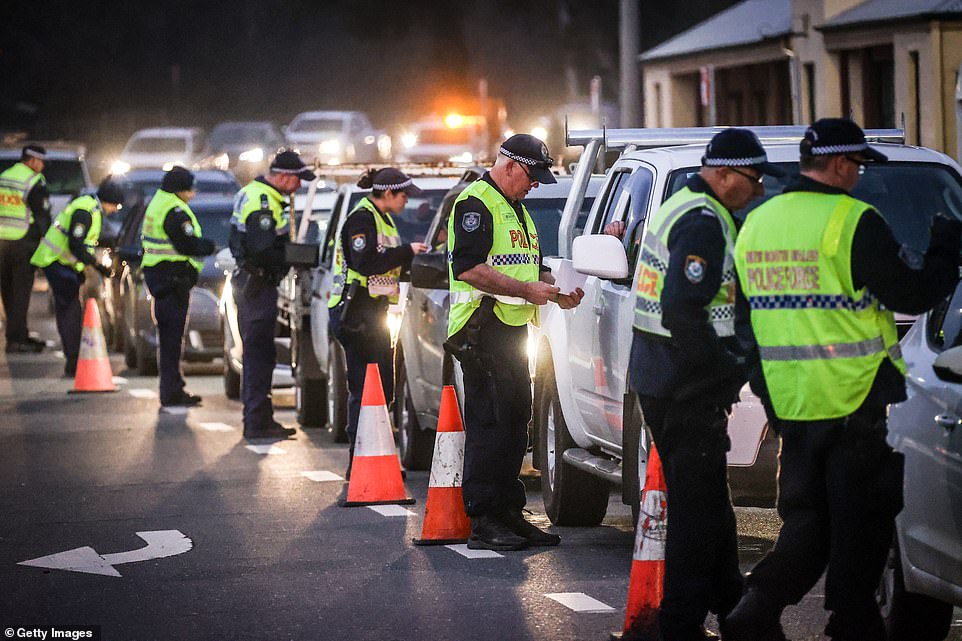 A long wait: Australians braved 40-minute traffic queues to get to work this morning on the first day the New South Wales-Victoria border closed due to a huge coronavirus outbreak in Melbourne 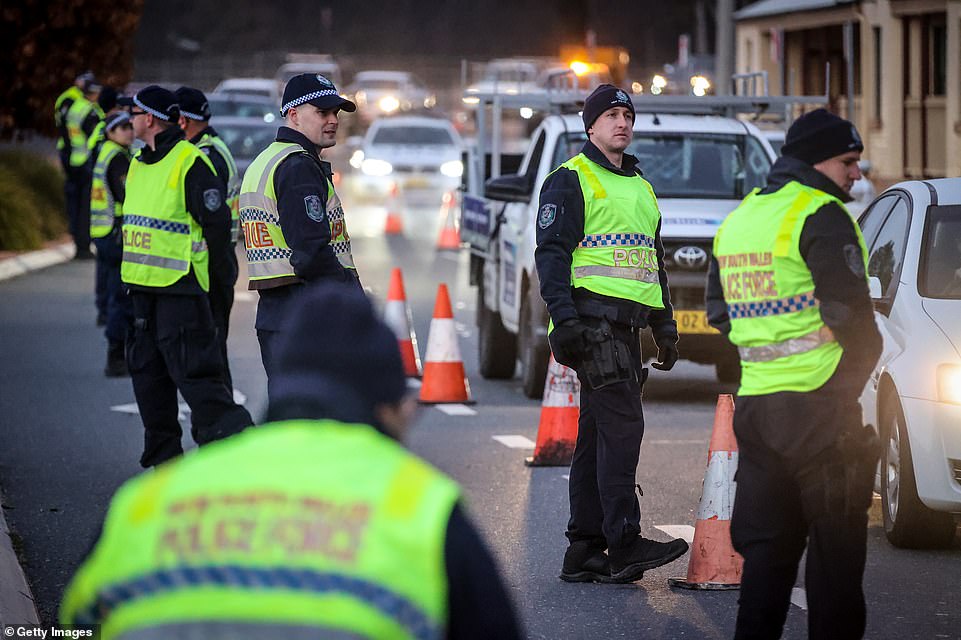 A Service NSW spokesperson said the permit application system had experienced high levels of demand, causing it to crash this morning. Pictured: Queues to get in to Albury 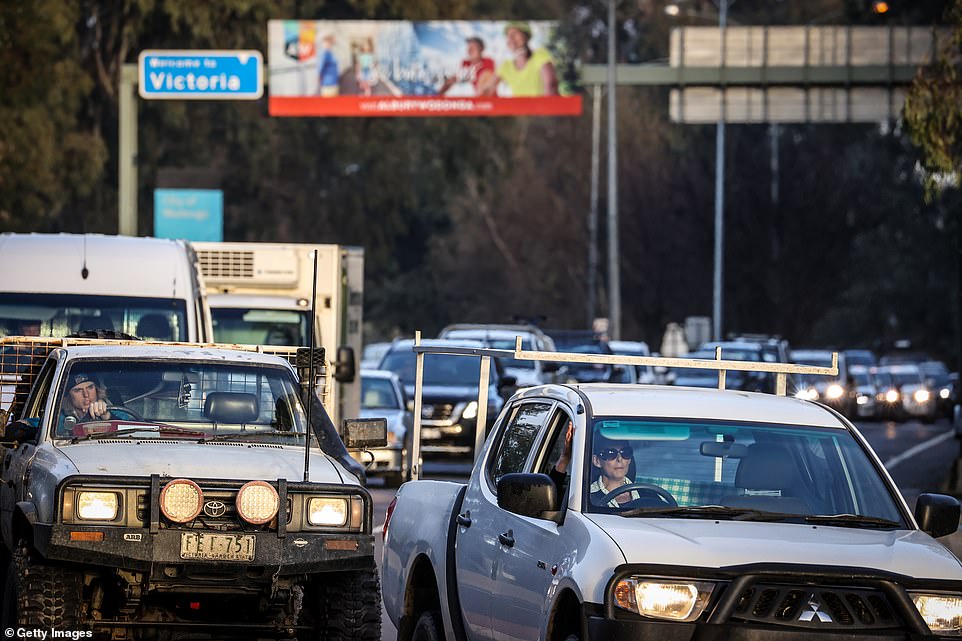 ‘We are aware that some people have experienced delays in securing a permit and we apologise for the delay,’ the spokesperson said in a statement. Pictured: Queues  to get in to Albury 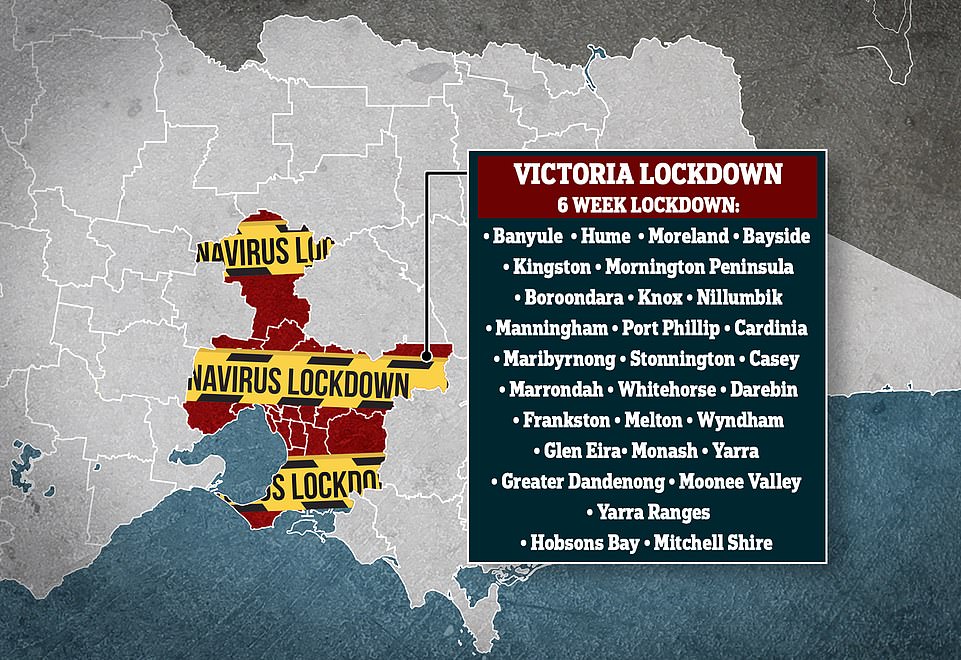 The whole of Melbourne and the Mitchell Shire north of the city will be placed back into lock down for six weeks from 11.59pm on Wednesday after Victoria recorded 191 new cases of coronavirus – its worst figure yet. Pictured: A map showing the suburbs in lockdown

Mr Andrews said case numbers will ‘get worse before they get better’. He has told Prime Minster Scott Morrison about the new lockdown and requested hundreds of ADF troops to help with enforcement.

The Premier also said he has spoken to Mr Morrison about the possibility of extending JobKeeper and the increased JobSeeker payment, which are due to expire in September, for Victorians who are locked down until 19 August.

‘I am confident that the Prime Minister knows and understands that there will be different forms of hardship in different parts of the country, different industry, different sectors,’ he said.

After Mr Andrews announced the new lockdown, Victorian Opposition leader Michael O’Brien savaged him for ‘failing to accept responsibility for his own mistakes’ regarding hotel quarantine.

Today marked the first time the NSW-Victoria border has closed since Spanish Flu struck in 1919. 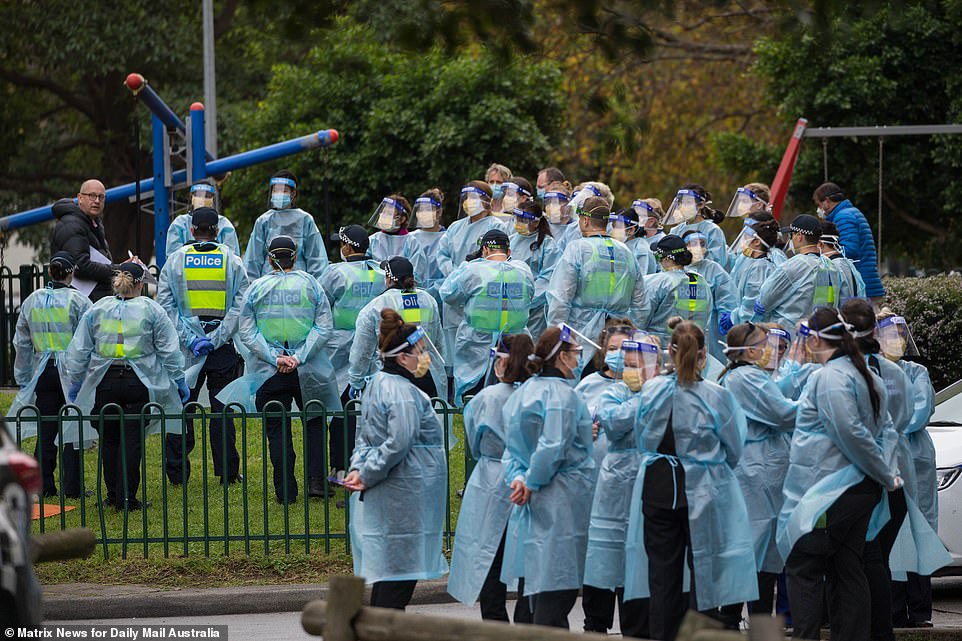 Australians braved 90-minute traffic queues to get to work this morning on the first day the New South Wales-Victoria border closed for the first time since Spanish Flu struck in 1919 due to a huge coronavirus outbreak in Melbourne.

A line of cars snaked for hundreds of metres along the Lincoln Causeway between Wodonga in Victoria and Albury in New South Wales as 600 police braved heavy fog and temperatures of 3C to man the 1,000km border overnight and this morning.

The two towns are only 7km apart and hundreds of residents live in one and work in the other, meaning the border closure which came into effect at midnight has thrown their lives upside-down.

NSW Police Commissioner told ABC radio that five cars had been stopped and turned around because they came from hotspot postcodes in metropolitan Melbourne and Mitchell Shire, where communities are preparing for a six-week lockdown from midnight on Wednesday.

Up to 500 defence personnel are also being deployed to help man checkpoints with road blocks and drones at 55 border crossings. 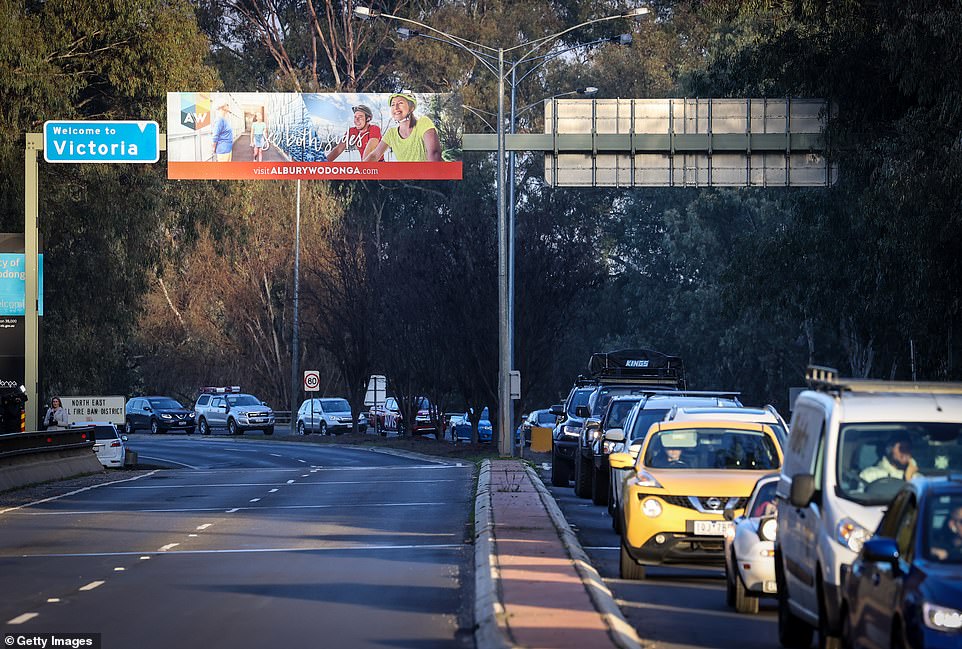 A line of cars snaked for hundreds of metres along the Lincoln Causeway between Wodonga in Victoria and Albury in New South Wales. Pictured: Commuters on the right wait to get to Albury in NSW for work