“Stuff the silver, we came for gold.” This famous line from swimming coach Laurie Lawrence was straight after one of the most star-studded races of all time. Underdog Duncan Armstrong had just caused a boilover, defeating two of the sport’s all-time greats to win the 200m freestyle at the 1988 Olympics. It was an extraordinary, unexpected victory. 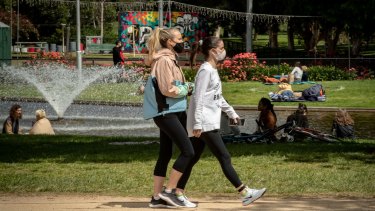 And so it is with Victoria’s remarkable COVID-19 response, crushing a substantial second wave like no other of the 73 countries that have experienced a second wave. It is a monumental success. From a peak of almost 8000 active cases in early August there are only 137 in the state today.

While this is a great victory it’s not yet gold. Gold is the elimination of community transmission, or zero mystery cases. We understand this is a vexed issue and the cause of much debate. Vexed mostly because it is not real elimination; the virus may still linger or be introduced undetected, as was demonstrated in Auckland’s August cluster. The gold we speak of is the circumstance in six Australian states and territories. Importantly, it is one step further than NSW as that state has had small but persistent community spread for three months now.

Victoria had no choice but to crush the curve. It would have been derelict for both public health and the economy to do anything else. When the numbers reached hundreds of new infections a day, contact tracing was overwhelmed and while stage three was hugely effective at slowing spread (preventing around 20,000 cases) it was not good enough. It was not until mandating masks and stage four restrictions that Victoria’s second wave dramatically declined, with both playing independent roles in that decline.

But why aim for zero? There are two key reasons. First, preventing a substantial third wave is vastly easier from a zero starting point than from a"bubbling along" standpoint. NSW has proven low COVID-19 can be maintained but they are always on tenterhooks; the chance of an unseen super-spreading event sparking an out-of-control brushfire is not trivial.

The second reason is the national context. There are huge social and economic reasons for Australia to be one unified place again. Zero COVID-19 is Australia’s best chance to open up internally and to have travel bubbles with other low-risk nations. For more reason than one, Australia desperately needs to get back to being a nation. No community transmission in every state and territory is the best pathway to achieve that.

Victoria is right to be cautious in exiting stage four. Coronavirus infections are surging across Europe and North America as winter looms. There are few lessons to be learned from those regions except that premature and abrupt easing of restrictions can have dire consequences.

Closer to home, Singapore, which has by far the highest number of cases per capita in Asia, offers a cautionary tale. On June 19, the country eased restrictions opening restaurants and gyms. In the seven subsequent weeks leading up to 8 August, Singapore – whose population is less than Victoria's – reported 13,096 new cases or 267 per day. Not an example for Victoria to follow.

The first phase of easing restrictions announced by the Premier on Sunday focuses on the outdoors. This is consistent with the international evidence that the risk of being infected indoors is up to 20 times higher than outdoors. Nevertheless, other precautions need to be adhered to, such as wearing masks when not eating or drinking and practising strict hand hygiene.

Nevertheless, with more than 130 active cases in Melbourne and 15 cases of unknown origin in the past 14 days, there are challenges ahead to ensure that a new surge is prevented. The experience of Sydney identifying new locally acquired cases after 12 days of zero cases indicates how long the virus can circulate hidden from view.

So what needs to be done to prevent a new spike? First, outbreak responses need to be rapid, nimble and proactive. The quick containment of clusters in Kilmore and Shepparton indicates that this capacity exists.

But there needs to be a greater focus on active case-finding in response to new cases. This means immediate testing, tracing and isolation of contacts, contacts of contacts, and all people in the index case’s immediate environment including testing of contacts with no symptoms. This response needs to be particularly vigorous in high-risk populations such as those living in crowded housing. Community engagement and involvement in this process is essential.

The previewed opening of retail and entertainment outlets on November 2 poses further challenges. Limits on the number of customers allowed in a shop should be defined. Clear guidelines for achieving physical distancing in large shopping centres like Chadstone need to be issued. A system of registering QR codes should be considered; this has been a successful measure in South Korea.

Finally, there must be a commitment to ensuring that high-risk settings like aged care homes and hospitals are implementing infection prevention and control measures that meet the highest standards.

As for Armstrong’s victory, much was said about "lucky lane 6" and how he rode a competitor’s bow wave to victory. Coach Lawrence gave this notion short shrift. It turns out Armstrong simply trained harder than the others. According to Lawrence, Armstrong won because "he paid the price".

And so, Victorians, have you. Gold is within reach.