A year ago, while Melbourne was in the grip of its long lockdown, the worst of the second COVID-19 outbreak was behind us. After peaking at 723 cases in late July, by the start of spring the daily figure for new cases had dropped to 70. At the time, all the enormous effort was paying off, and the eventual reward was a summer with few restrictions. A year later, it’s a different state of affairs.

On Wednesday, the jump in new cases to 120 signalled that the chance of Victoria returning to COVID zero in the community has gone, and the government and health officers have acknowledged it. While the daily numbers are not in the same league as NSW’s, the pathway back to more freedoms is the same – high vaccination rates. 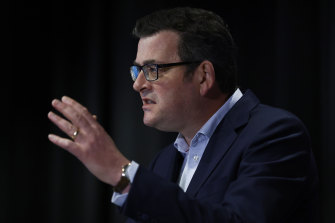 Under the national plan, we remain in limbo until full-vaccination rates are at 70, then 80 per cent. That’s tough, but it’s true, and the libertarians who think “living with COVID” means that most restrictions should be lifted now are fooling no one. Reaching the vaccination threshold will take until October or November if we’re lucky, and even then some restrictions and public health measures will remain.

But there comes a point, and The Age believes that point has been reached, where the damage caused by the harshest and longest lockdowns in the country needs to be more seriously factored in. Wednesday’s announced “easing” was a harsh and cruel blow. Playgrounds can open on Friday (although, in true Victorian style, only one carer can attend and they cannot remove their mask even to eat or drink). Few experts ever endorsed the playground ban in the first place.

Premier Daniel Andrews announced that once 70 per cent of us have had one vaccine dose – on or around September 23 – Melburnians may be granted the right to travel 10 kilometres from their home, rather than five kilometres. The night curfews remain in Melbourne, despite limited evidence they make a difference. There is no plan to return children to schools until term 4, despite the serious impact home schooling is having on our young people’s mental health and the long-term damage this is doing to the educational chances of our most disadvantaged children. At least the government announced it would prioritise vaccination for year 12 students.

The Age is not arguing that we should throw out restrictions, but instead that we need to work out those that could be lifted at minimal risk to health but with maximum benefit to Victorians. “Minimal risk” is not “no risk”, but we must shift towards a more balanced position, even a little. Health authorities and the Premier have always said that a “package” of measures is needed and that one measure cannot be separated from others. But since we all now agree we will not get to zero cases, the government needs to adjust the balance of that “package”, because, after six lockdowns, many people are struggling beyond the point of endurance.

The Age has also had enough of the lack of information from the state government. Such harsh restrictions enforced for such an extended time must be fully justified with clear evidence that they are effective. Victorians need to see the modelling. We need to know where people are becoming infected. How many at home? How many in workplaces? How many (as far as we can know) were infected while having a picnic?

Premier, your state needs hope. No more lectures about compliance. No more measures that have limited if any evidence to back them just in case they might assist around the edges. We need a plan for the 30 per cent or more who are fully vaccinated to have more freedoms at some point, a plan to re-open schools and businesses once vaccination targets are reached.