Washington: If you want a glimpse of just how ruthless US politics has become, look no further than the way migrants are being used as political pawns in the final sprint to the midterm elections.

For months, Republican governors have been sending people who recently crossed the US-Mexico border to Democrat-led cities such as Washington DC, New York and Chicago in a bid to publicise the soaring number of arrivals under the Biden administration. 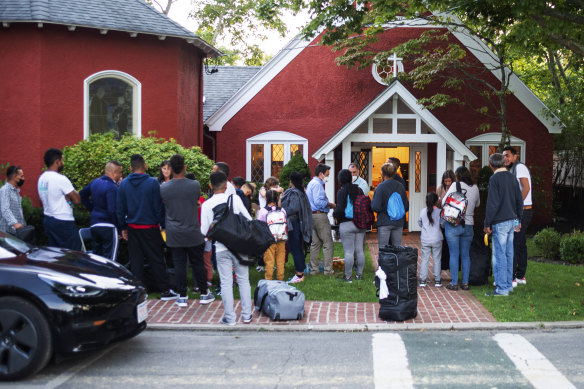 Immigrants gather with their belongings outside a church on Martha’s Vineyard.Credit:AP

It began in April, when Texas governor Greg Abbott sent the first busload of migrants to the nation’s capital in a bid to antagonise the President over border security.

But what began as a publicity stunt reached fever pitch this week, when buses of migrants sent by Abbott were dropped off outside the DC residence of Vice President Kamala Harris, while Florida governor Ron DeSantis sent chartered flights to Martha’s Vineyard, an island playground in Massachusetts for celebrities, presidents and affluent holiday-makers.

Most of the migrants came from the Venezuela, a South American nation that has been in economic and political crisis for years, which has contributed to the growing influx of people trying to seek a new life in America.

Unable to read or speak English, many didn’t even know where they were when they landed, with some claiming they were lured on planes with the promise of being able to get work papers. 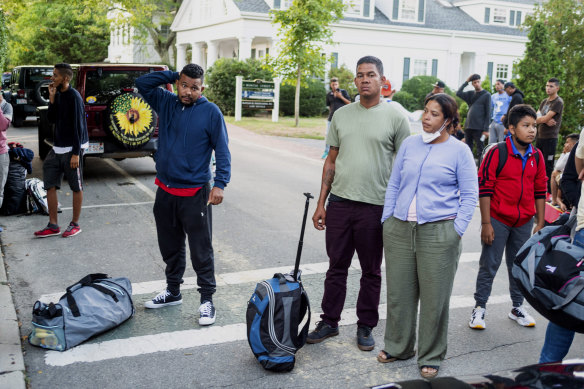 The Republicans have been accused of treating migrants like “human cargo” to score cheap political points.Credit:AP

One man, who did not wish to be named, told the local reporters from the Vineyard Gazette that he came to America with eight family members and had an immigration court date set for September 21 in Los Angeles. Now he’s worried if he’ll make it.

“I think this is all a ploy to get us to miss our court dates so we get in trouble with the law and they can deport us,” he said.

Not surprisingly, the latest moves have sparked outrage among Democrats, immigration groups, and human rights activists who have accused Republicans of treating migrants like “human cargo” to score cheap political points.

Even Biden, who tends to tread carefully on immigration knowing it’s a weak spot for his party, lashed out on Thursday night during a speech at the Congressional Hispanic Caucus Institute’s annual gala, describing the latest actions as “un-American”, “reckless” and “simply wrong. 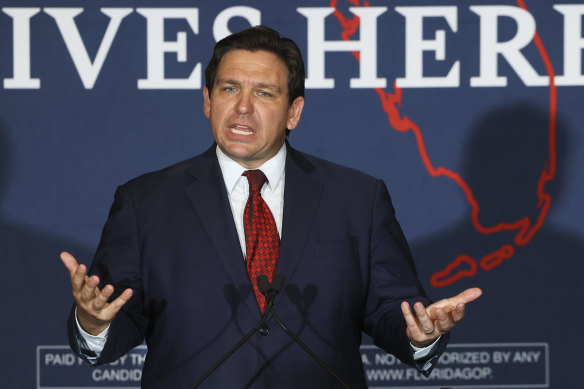 “Republicans are playing politics with human beings, using them as props,” he said. “We have a process in place to manage migrants at the border. We’re working to make sure it’s safe and orderly and humane.”

There’s no doubt that the US has a border crisis, with official figures showing border patrol agents recorded 1.9 million encounters with migrants between October 2021 and the end of July – an all-time high.

Recent research conducted by the Missing Migrants Project and published by the International Organisation for Migration (IOM) also identified the border crossing between the US and Mexico as the deadliest migration land route in the world.

The July study found that there were at least 1238 deaths during migration in the Americas in 2021, and at least 728 of the total deaths occurred along the US-Mexico border.

The most shocking example of the dangers people face trying to get into the country was highlighted in June, after 53 people from Mexico and Central America died after being trapped in a sweltering tractor-trailer in San Antonio, in what officials described as the deadliest migrant smuggling case in US history.

Biden has made himself a target because in his early days of office, he acted swiftly to reverse some of Donald Trump’s most restrictive policies, including halting construction of his predecessor’s $16 billion border wall. More recently, the Supreme Court gave the administration the green light to terminate the “remain in Mexico” program and no longer send asylum seekers back across the border while awaiting a decision on their applications for US protection.

Kamala Harris, who Biden put in charge of addressing the root causes of migration from Central America, has also been fairly ineffective, and has been criticised all week for claiming in an NBC interview that the border was secure.

But while this is far from true, using vulnerable humans as political pawns is unedifying, cruel and a sign of just how ugly the political landscape will get in the lead up to the midterms and beyond. 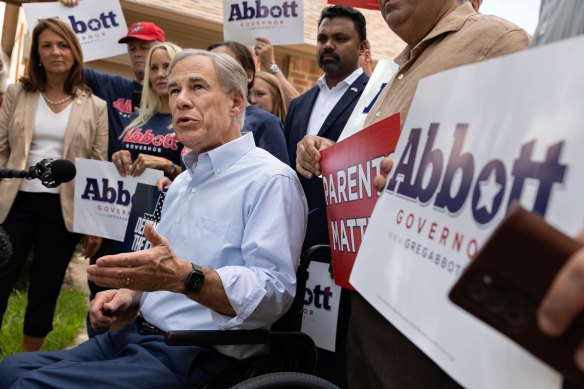 To be sure, all sides of politics h have done it: during the Trump administration, Democrats often made their way to detention centres to bemoan the treatment of kids “locked in cages” – an emotive reference to children being held in cells partitioned with chain-link fencing after being separating from their parents.

But these latest examples reek more of a strategy to “own the Left” and lift the national profiles of the ambitious governors involved, rather than join forces to come up with workable policies for a longstanding problem.

It’s no secret that DeSantis and Abbott have set their sights on a possible run for president in 2024 – particularly if Trump doesn’t end up seeking the Republican nomination.

In Texas, Abbott has earned the praise of conservatives by making good on a range of promises, from restricting access to abortion, expanding the ability of Texans to carry guns, and launching a crowdfunding effort to build a border wall.

In Florida, DeSantis also has a lengthy list of policies that have made him such a popular figure among the party’s rank and file – from shunning mask mandates as coronavirus soared, challenging “woke” Disney over his state’s so-called Don’t Say Gay Laws, and setting up penalties for big-tech companies that deplatformed politicians.

Now, both Governors have something else to add to their resumes, this time over one of the GOP’s key policy battlegrounds. Indeed, a Gallup poll from earlier this year found that 87 per cent of Republicans were dissatisfied with the level of immigration in the US – the highest point in decades.

To that end, the Republican leaders are simply playing to their base – with people’s lives.

he was in on that freezing night at the top of the Bird’s Nest stadium in Beijing in February.